New tricks don't break Jacquard out of its niche.

You wouldn't normally think of Google as a maker of clothing, but the company has been working on a platform for connected apparel and accessories for awhile now. Four years ago, it teased Jacquard, a platform involving touch-sensitive threads that can be woven into fabrics to make them "smart." The first Jacquard-enabled smart jacket launched in 2017, giving us a glimpse at the potential of this system. But it had limited use and appeal. It specifically targeted people who bike to work. An update arrived last year, making Jacquard slightly more useful. But, there's a lot more work to be done, and Google is ready to show us what's next with an updated and cheaper version of the smart jacket.

With the new version, Google and Levis want to reach more people, and they're doing so by offering more designs, launching in more countries and most importantly, cutting prices. Now, you can get Jacquard in Levis' Sherpa Trucker jackets in addition to plain Trucker, and the price has dropped to $198. That's a pretty steep cut from last year's $350. Plus it's launching in Australia, France, Germany, Japan, Italy and the UK, as opposed to just the US this time.

But, Google also needs to make Jacquard more useful to appeal to more users, so it's continuing to add features. With this update, Jacquard is now able to do three new things: remotely trigger your camera shutter, deliver your daily briefing and you can create shortcut for it to perform one specific task of your choice using Google Assistant.

The updated Jacquard software also works with the YSL backpack that was announced earlier this month, as well as the older Commuter jackets. But this year's garments/backpack use a refined Jacquard tag. This is a module that you snap into the jacket sleeve or a pocket in the lining of the backpack, and connects the clothes to your phone.

It's a lot smaller than before: about the size of your thumb, whereas last year's was more like the size of two whole fingers. It's also easier to attach the tag to the jacket. Last time around, you had to first snap the tag on like a button, then tuck its tail into a slit in the cuff. This time, you just slide the tag into its housing like a cartridge into a tiny Game Boy. 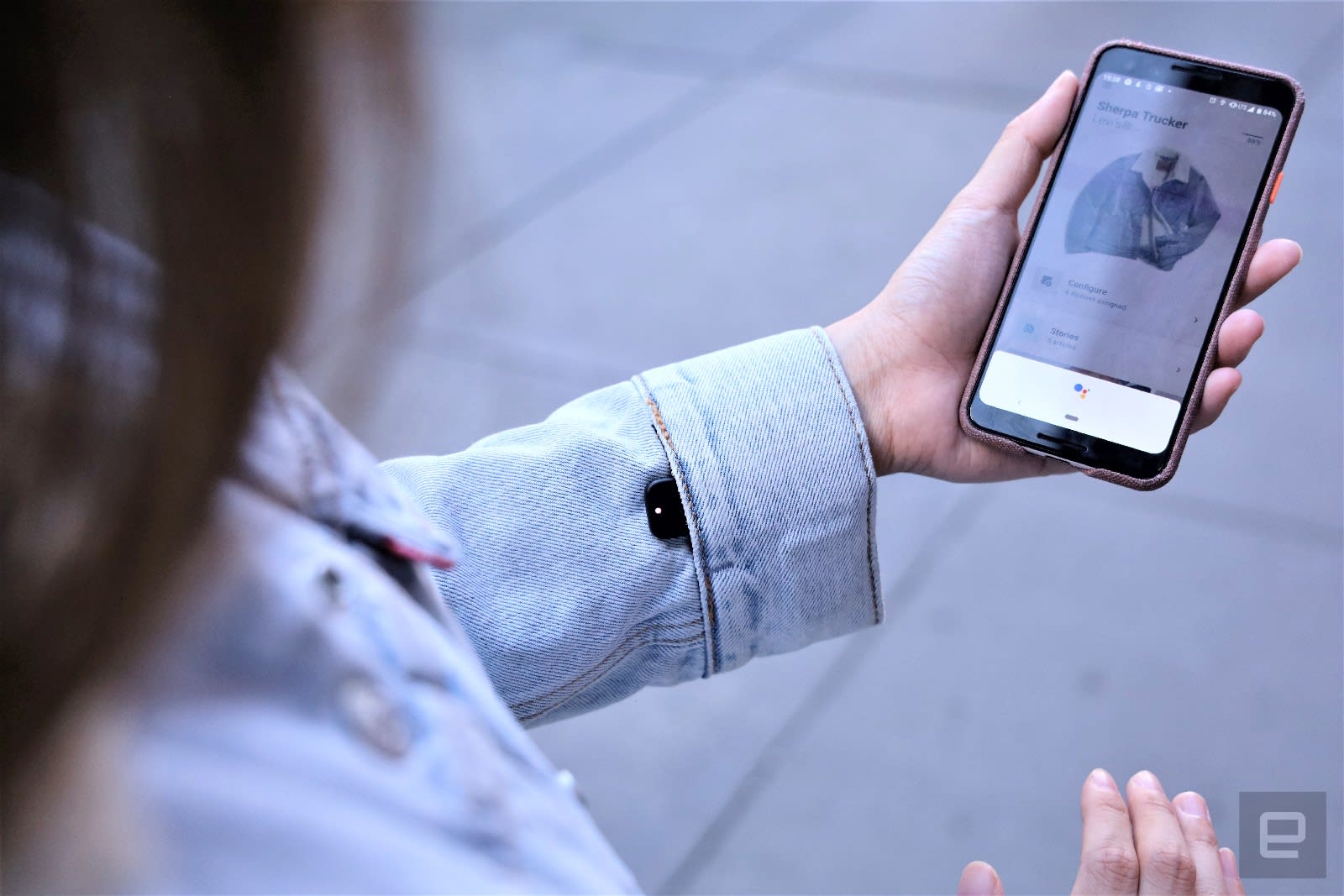 Once you've connected the tag to your phone, you can tap or swipe the left cuff on your sleeve to trigger actions you've set up. You can slide in or out from the outer edge, or double tap your wrist. I set my jacket to skip and rewind a track when I swiped out and in respectively, and to get Google Assistant to play music when I double tapped. Later, I changed double tapping to take a picture.

Lots of these functions are still limited. For example, when you take a picture with Jacquard, you can only use your phone's front camera, and are forced to sit through a 3-second timer each time you trigger it. The pictures you take are saved to the Jacquard app, and you'll have to manually save them to your gallery.

The full breadth of what Jacquard can do is still pretty narrow, too. In addition to the three new features, the system can log places you've been, count the number of taps or swipes you make, find your phone, tell you the time or what song you're playing, read navigation directions and give you a summary of your day. Oh, and it can also toggle noise cancellation for some Bose headphones. There's also a light on the tag that can flash three different colors, which you can set to indicate when you've received important alerts or when your cab has arrived.

Jacquard doesn't offer a comprehensive set of tools, but that's by design. "It was never meant to do everything," Paul Dillinger, head of global product innovation for Levis, told Engadget. "It's meant for those moments of life when you're wearing a jean jacket," he said. Or, for that matter, when you're wearing a YSL backpack. That's mostly when you're out and about, commuting or strolling Fifth Avenue on a shopping spree, for example.

I opted for one of the new Sherpa Trucker jackets, and have worn it in spite of the unseasonable heat in New York these past few days. The jacket itself is comfortable and stylish, as you'd expect from Levis. In fact, according to Dillinger, this is the same form that's been used for the last 53 years, and is "arguably the most successful outerwear design in history."

Adding the touch-sensitive fibers to the cuff hasn't impacted the design and fit much -- I barely noticed the tag in the sleeve, except for when it vibrated. Compared to last year's Commuter jacket, though, the interactive area on the cuff is smaller, so I have to be a bit more deliberate with my gestures.

I also noticed connectivity troubles between the jacket and my phone, where the two devices would randomly stop syncing and I'd have to re-link them all over again.

For something that costs $198, that's a concerning glitch. It's also a price that's hard to swallow. If Google wants to reach more people it will have to get the price closer to the non-smart Levis Sherpa which costs around $100. 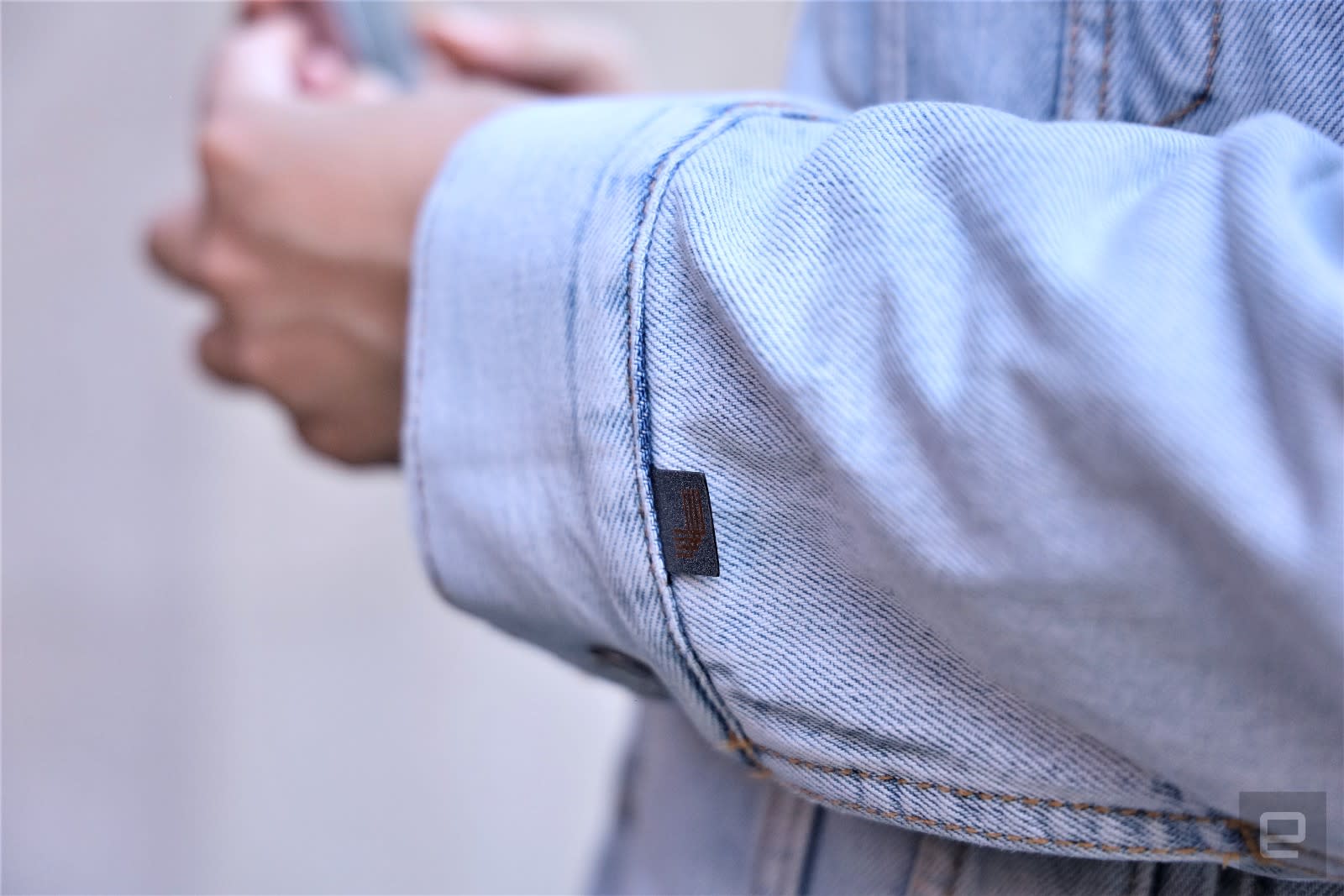 It's also going to have to find more partners with the reach of Levis. YSL may bring Jacquard some prestige, but it won't give it the same chance at mainstream success as H&M or American Eagle. "The goal is to work with partners in lower price ranges," said Ivan Poupyrev, director of engineering at Google ATAP, the department responsible for Jacquard. Poupyrev pointed to developments in the smartphone industry as an example of how Google and its partners can make Jacquard products more accessible. "As technology improves and we have economies of scale, the price goes down," he said. It's a sort of chicken-and-egg problem as demand for Jacquard products need to increase so that companies have the incentive to make prices lower.

As it stands, Jacquard and the Levis Trucker jackets are still limited in usefulness and appeal. But it's clear that Google is determined to power through and find a way for the platform to work, even if just in very specific scenarios. And as we march towards a world where computers are embedded in every facet (and fabric) of our lives that might be crucial for Google's future. For now though, Jacquard still feels more like an experiment than a necessity.

All products recommended by Engadget are selected by our editorial team, independent of our parent company. Some of our stories include affiliate links. If you buy something through one of these links, we may earn an affiliate commission. All prices are correct at the time of publishing.
Google and Levis' second jacket is smarter, but still a novelty
atap
gadgetry
gadgets
gear
google
google jacquard
jacquard
smart clothes
smart jacket
wearables