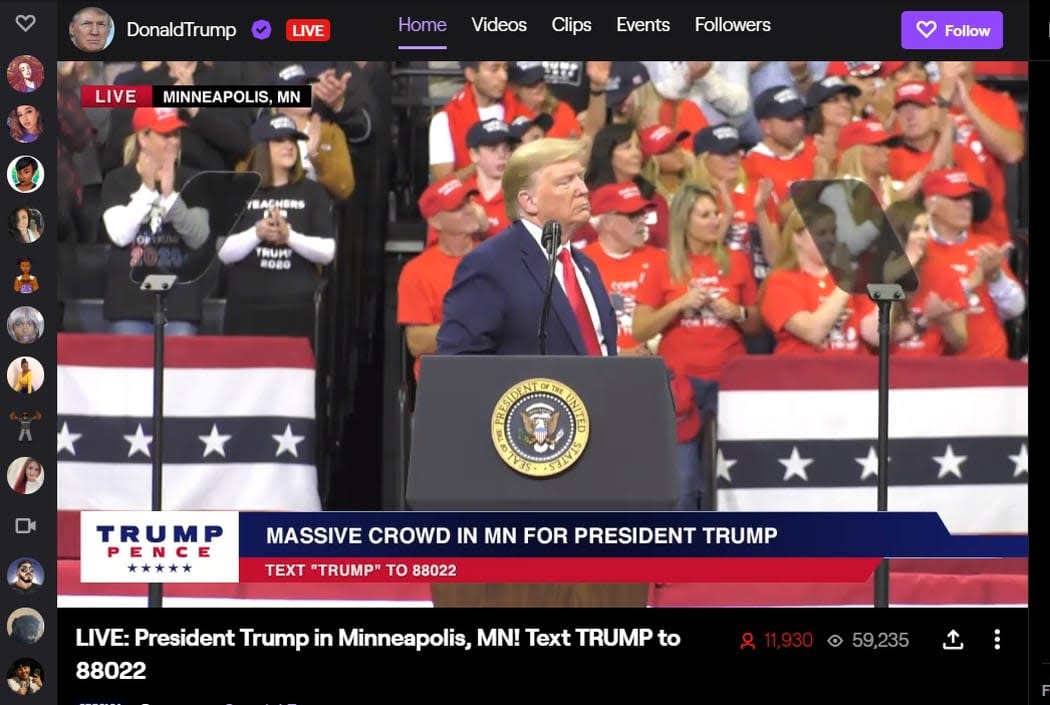 The 2020 presidential campaigns are well under way, and Donald Trump has added another internet outlet to reach voters: Twitch. The campaign's first verified stream went live tonight from a rally in Minneapolis, as Trump followed Bernie Sanders' campaign in creating a presence on the site. While the primary use of Twitch is for live video game streams, as of this writing it's also hosting one of Amazon's Thursday Night Football feeds with about 41,000 viewers. The Trump stream counted 12,000 or so.

As of last check, the Twitch TOS doesn't have any special carve-outs for politicians or political speech. Trump has frequently targeted its CEO Jeff Bezos and the Washington Post with criticism and comments, so if there's ever an issue of moderation on the channel it could be another flashpoint of controversy between those parties. Another odd element of Trump's use of Twitch is the administration's stance on gaming -- in May it hosted a meeting "to discuss violent video-game exposure and the correlation to aggression and desensitization in children." Now its campaign events are going live next to streams of Fortnite and Apex.

In this article: 2020 election, Amazon, campaign rally, Donald Trump, entertainment, gaming, live stream, politics, POTUS, Twitch
All products recommended by Engadget are selected by our editorial team, independent of our parent company. Some of our stories include affiliate links. If you buy something through one of these links, we may earn an affiliate commission.
Share
Tweet
Share