Perfect for calling for help from the next Fyre festival.

Here's a few things to know about trying to score Supreme products during its weekly drop: I had to wait in line for about two hours, on a cold and windy day in NYC, just to get inside the brand's Brooklyn store. But to even make it that far, you have to first try and register online to get an invite to the shop in the first place. Typically, Supreme releases happen on Thursdays and store registration on Tuesdays, though they close out in minutes. I've gone through all of this many times before, but today I was there to pick up the "Supreme Blu Burner Phone," a low-end device that's made for hypebeasts.

The phone sold out in seconds on Supreme's site, and even though I had an early morning slot to get into the store, the red model was already gone. So I bought the black one you see here. 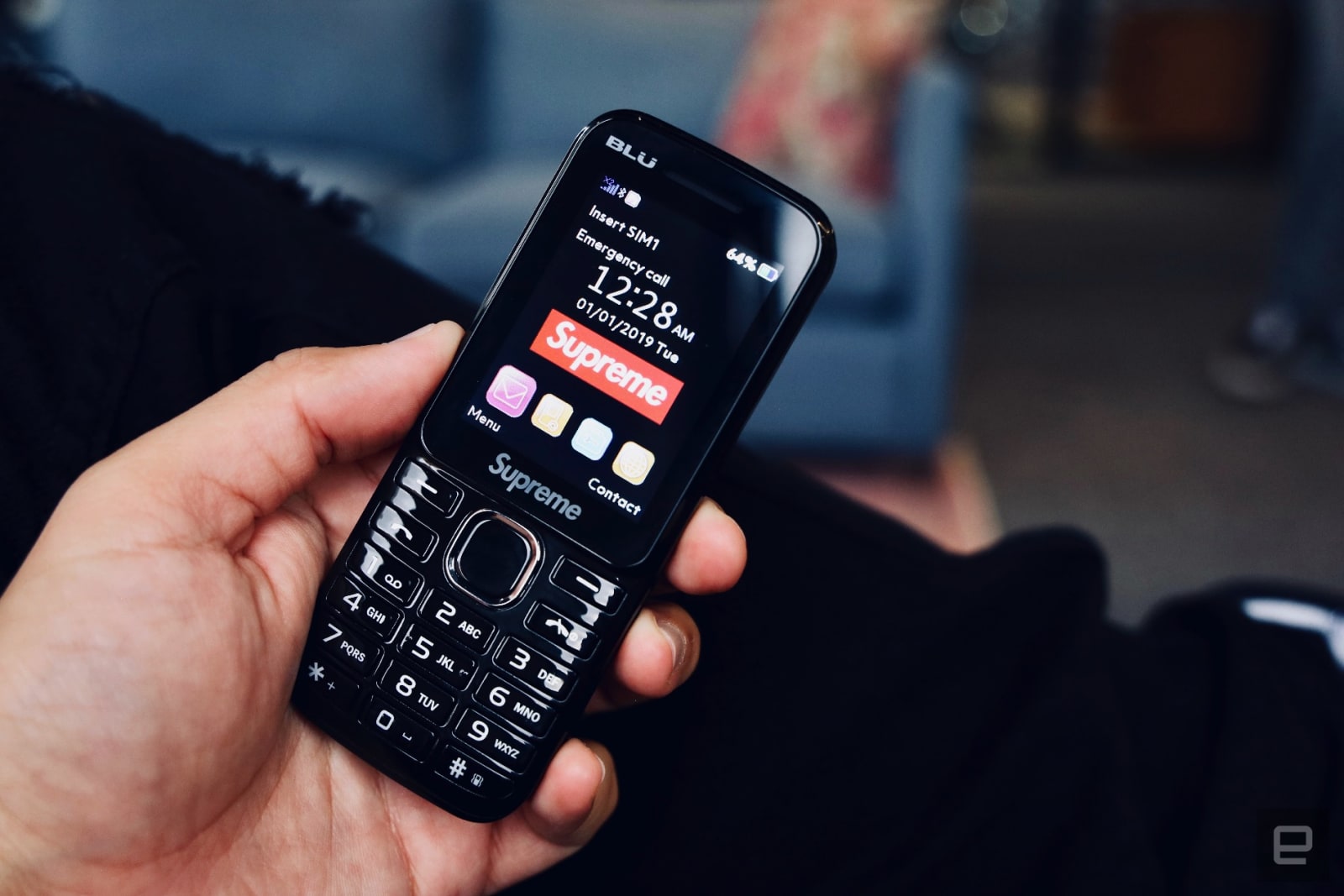 Before we go any further, I know you're probably wondering who asked for this? And the answer is simple: no one. But that doesn't matter to Supreme. After all, the popular streetwear brand has made a literal brick, which features its iconic box logo and can now be found on the resale market for upwards of $150. With a dumb phone, you could at least make the argument that it has a practical use.

As you might expect, though, the Supreme Blu burner phone isn't here to battle the iPhone 11 or Pixel 4. The candybar-style phone features a 2.4-inch display, a VGA rear camera (no selfie cam, sorry), sluggish 3G connectivity and support for up to 32GB of storage. (Supreme was nice enough to toss in a 16GB card.)

You'll also find dual SIM slots on the handset, but unfortunately we couldn't make any phone calls because, well, it's hard to find a working full-size SIM these days. If you do find some of those old-school SIMs, the phone is unlocked, so it can work with a couple different carriers simultaneously. Considering a "burner phone" is generally associated with conducting shady business (sometimes they're also called "trap phones"), you can see how having access to dual SIMs can come in handy. That said, the only business hypebeasts who get this phone will probably be conducting is taking pictures with it and posting them on Instagram.

While I wasn't able to make a call, I did play some games on the Supreme burner phone. There's one called BUBBLE PARTY MIX that's basically a Candy Crush clone, and I gotta say it's not all that terrible. I took pictures with the VGA camera, too, which are just as bad and blurry as you'd imagine. But if you convince yourself it's like a more authentic version of an Instagram filter, maybe you wont mind. Other basic features include a calendar, web browser, FM radio and an audio player. I tried to pair my AirPods with it, since it does support Bluetooth, but I could not get it to work. (I'm not going to give up on that dream just yet, though.)

Here's the thing, though: Supreme's Blu burner phone isn't designed to be anyone's daily driver. People aren't buying it because of its specs -- they're buying it because it has giant Supreme logos all over it. And in case you were wondering just how much hypebeasts are willing to pay for it, the phone was priced at $60 and is now going for around $200 on eBay. That's Supreme for you.