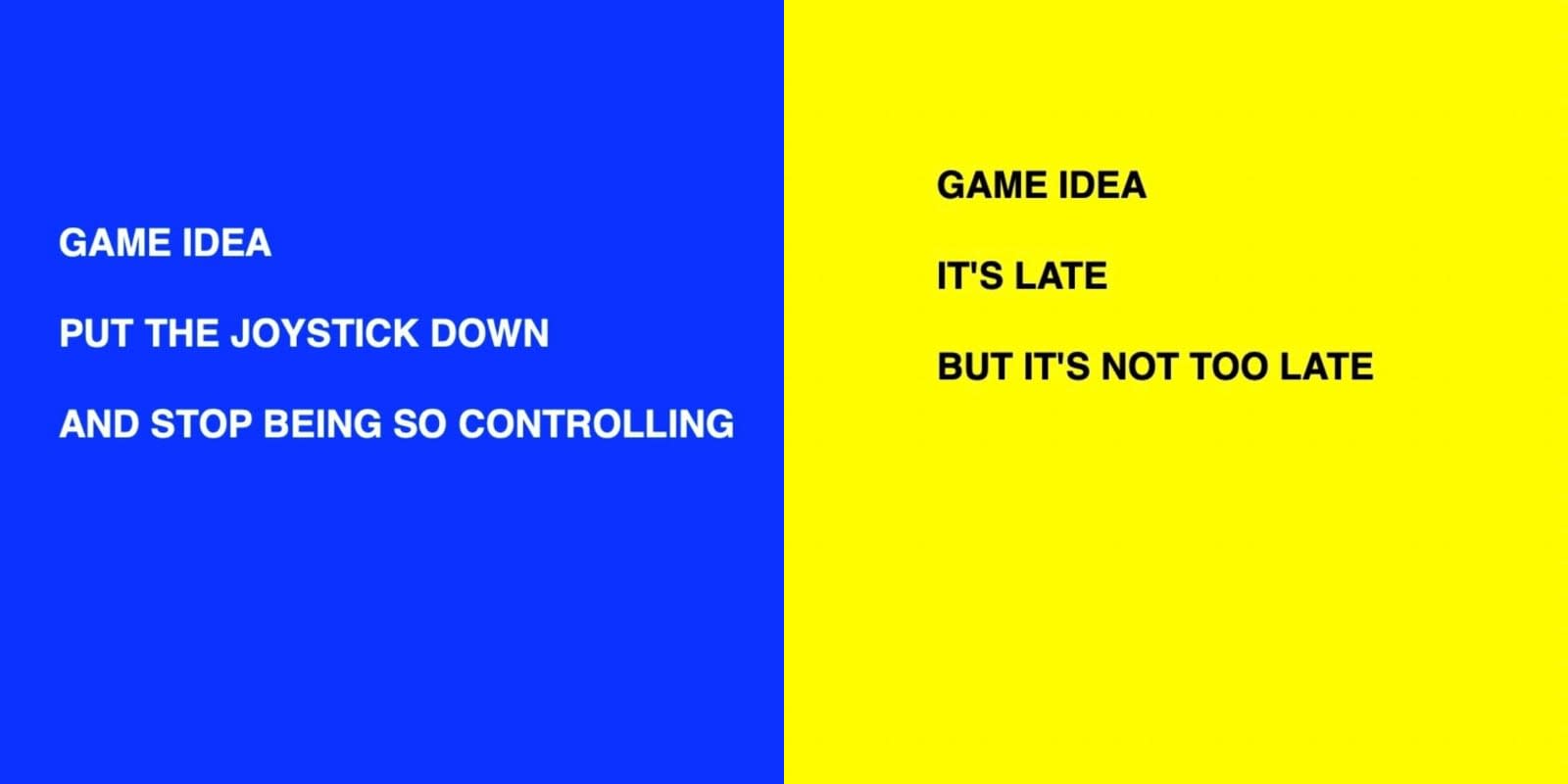 Pippin Barr is what happens when you hand a philosopher a video game controller. He received a Ph.D in Computer Science in 2008 with a thesis titled, Video Game Values: Play as Human-Computer Interaction. He's built a tongue-in-cheek series of games based on Greek mythology where players are handed impossible tasks, such as pushing a boulder up a hill as Sisyphus, or struggling against chains while a pixelated eagle pecks out your liver as Prometheus.

In 2011, Barr created The Artist is Present, a digital version of artist Marina Abramović's famed MoMA performance piece. In it, players pay to enter the museum and wait in line for hours, in real-time, for the chance to sit and stare into Abramović's eyes for as long as they wish. Well, at least until the museum closes.

Barr is currently an assistant professor in design and computation arts at Concordia University in Montreal. He's also on Twitter.

YOU HAVE NOT ANSWERED

Barr tweets at least once per day in a clear, repeated format that's hard to miss in Twitter's flood of standard text, images and emojis. It's all caps, with thoughts double-spaced and stacked on top of each other, always starting with, "GAME IDEA." Barr finishes the thought with phrases like,

YOUR PARENT WAS WRONG

TO ASK FOR HELP.

The way he composes these tweets, broken up and screaming at the viewer, makes them read like miniature poems about game design and consumption. Many of them are funny, highlighting ironies and inconsistencies about gameplay in general, and poking holes in the industry's accepted wisdoms.

"I don't know how I gave myself permission to do that, but I wanted them to come across as separate from the normal flow of Twitter, which is super ostentatious," Barr said.

The hope is that the GAME IDEA tweets feel like "these weird, out of context missives from a strange idea-generation machine, rather than a human person that you could get any real sense of," Barr told Engadget. "Which is naive, because of course you can get some sort of sense about what kind of person I am by the kinds of things that I write. Even what kind of mood I'm in. They get pretty dark sometimes, although often that means I'm in a good mood."

Barr has a tweet routine. Around 10 each morning, he opens Twitter and writes, "GAME IDEA." Then he waits for inspiration to strike. He sits and thinks about holding a controller, looking down at the buttons, twiddling the thumbsticks, and what it all means. Or, what it doesn't mean. Eventually, he hits "Tweet."

USE THE RIGHT THUMBSTICK

JUST FOR THE SAKE OF IT

JUST TO KIND OF MOVE IT AROUND?

"It's definitely not meant to be a big message about how games are or how they should be, but more that the whole thing of games and the ideas that we have for games are super, super limited," Barr said. "I like trying to make fun of that, including my own limitations."

Take Red Dead Redemption 2, for example. Video game fans extol the massive, open-world map, lauding all of the tasks they can accomplish with their digital avatar, praising the sense of scope and choice that the game provides. But of course, Red Dead Redemption 2 is naturally restricted by its input methods, utilizing a set number of buttons with specific actions attached to them. Rather than allowing individual interpretation, the game forces players to act in certain ways. It simply provides a large map for them to repeat those options in an endless, positive feedback loop.

"That's a very specific kind of person that only does those things."

"You see Red Dead Redemption and it seems incredibly liberating, like there's so much you can do and it's so beautiful," Barr said. "But if you look at just the buttons that you've got, it's like, move around the world and shoot your gun, and that's about it. That's a very specific kind of person that only does those things."

For video game fans, it feels blasphemous and ungrateful to claim Red Dead Redemption 2 doesn't offer enough choice, but this lack of digital agency is obvious to people who don't regularly play. The limitations of video games -- even huge, AAA experiences -- are often what turn new players off when they pick up a controller. This isn't exactly scientifically proven, but anecdotal evidence abounds.

The clearest example comes from YouTube gamer Razbuten, who published a video in September titled, "What Games Are Like For Someone Who Doesn't Play Games." In it, his wife, who has no experience with video games, plays through a handful of prominent titles while he silently watches and analyzes her reactions. It's hilarious, but also informative.

Here's how Razbuten breaks it down near the end of the video:

"Throughout the various games, a pretty common question she asked was, 'Why can't I do it this way?' And my response was, 'Because.' The deeper answer is that limitations exist in games because there are only so many potential inputs a title can have, meaning there are a finite number of ways a player can interact with things."

The lack of choice frustrated his wife, while Razbuten himself expected the limitations and even found the design choices made around those restrictions beautiful.

Barr had a similar experience with his wife, who tried to play Grand Theft Auto V, but gave up after crashing a car into a wall. She was unable to get out of the car or back away from the wall, the only two options in that scenario. She wanted to try something else, but the software wouldn't let her, so she stopped playing.

YOU WILL NEVER BE FULFILLED

BUT PRESS START TO BEGIN ANYWAY

Barr also showed his parents Red Dead Redemption 2, and they all marveled at the graphics and animations, and how gorgeous the environments were. And then, the gameplay started.

"My parents were just stunned by the limitations on what the game was really interested in me doing, which was the usual, get told what to do and shoot somebody or punch them," Barr said. "They were mesmerized by that because they don't come from that world at all."

Barr's tweets are a pause button for the video game industry. They're an invitation to stop and think, just for a moment, about what video games actually are, why we enjoy them, and how they could be different than the shoot, loot, win cycle dominating the industry. His GAME IDEAs are lighthearted and witty, but the best ones are also poignant. People chime in with weird games that fit into the oddly shaped boxes Barr has built, like Undertale, Untitled Goose Game and Noita. The tweets start conversations. For a philosopher, few outcomes could be better.

Between classes, Barr is building The Artist is Present 2, a sequel that puts players in the iconic red dress of Marina Abramović. It's the same scenario as the first game, but this time around, you're the artist herself, and it's your duty to stare into the eyes of every person who sits in front of you, for as long as they wish. The game starts in her apartment and has players walk through the steps of preparing for the day, putting on the dress, walking to the museum, and then sitting for hours on end. Barr actually told Abramović about this idea, briefly, when he met her.

USE THE LEFT ANALOG STICK

USE THE RIGHT ANALOG STICK

TO LOOK BACK OVER YOUR SHOULDER

TO SEE IF THEY'RE WATCHING

"She said it sounded really boring, which I thought was pretty funny," Barr said.

It's a ridiculous idea for a game, but much like the tweets, there's a larger point hiding behind the cheek. Eventually, that stillness and staring turns into human connection, even with characters that look like they spawned directly out of MS Paint.

"You're subsuming your needs and any selfish desires you have for these little computer-generated people, who aren't real, but they need you to see them," Barr said. "That's kind of the feeling that I'm interested in trying to generate, that you feel this responsibility towards these fake people who desperately want you to look at them, and look into their eyes and make them feel seen."

YOU ARE IN A STARING CONTEST

WITH THE GOD OF STARING

AND IT'S NOT LOOKING GOOD.

It reads like a sly plug for The Artist is Present 2, snuck in between hundreds of authentic philosophical musings. However, its true nature is much less conniving.

"I didn't even think of it," Barr said. "The point that I'm at, working on the game right now, I'm not thinking about staring. It wasn't on my mind at all. I was thinking actually that I've done one a while ago about the classic line about gazing into the abyss and how it also looks into you. ...I was trying to come up with a different spin on that."

In the end, it's just a game idea.