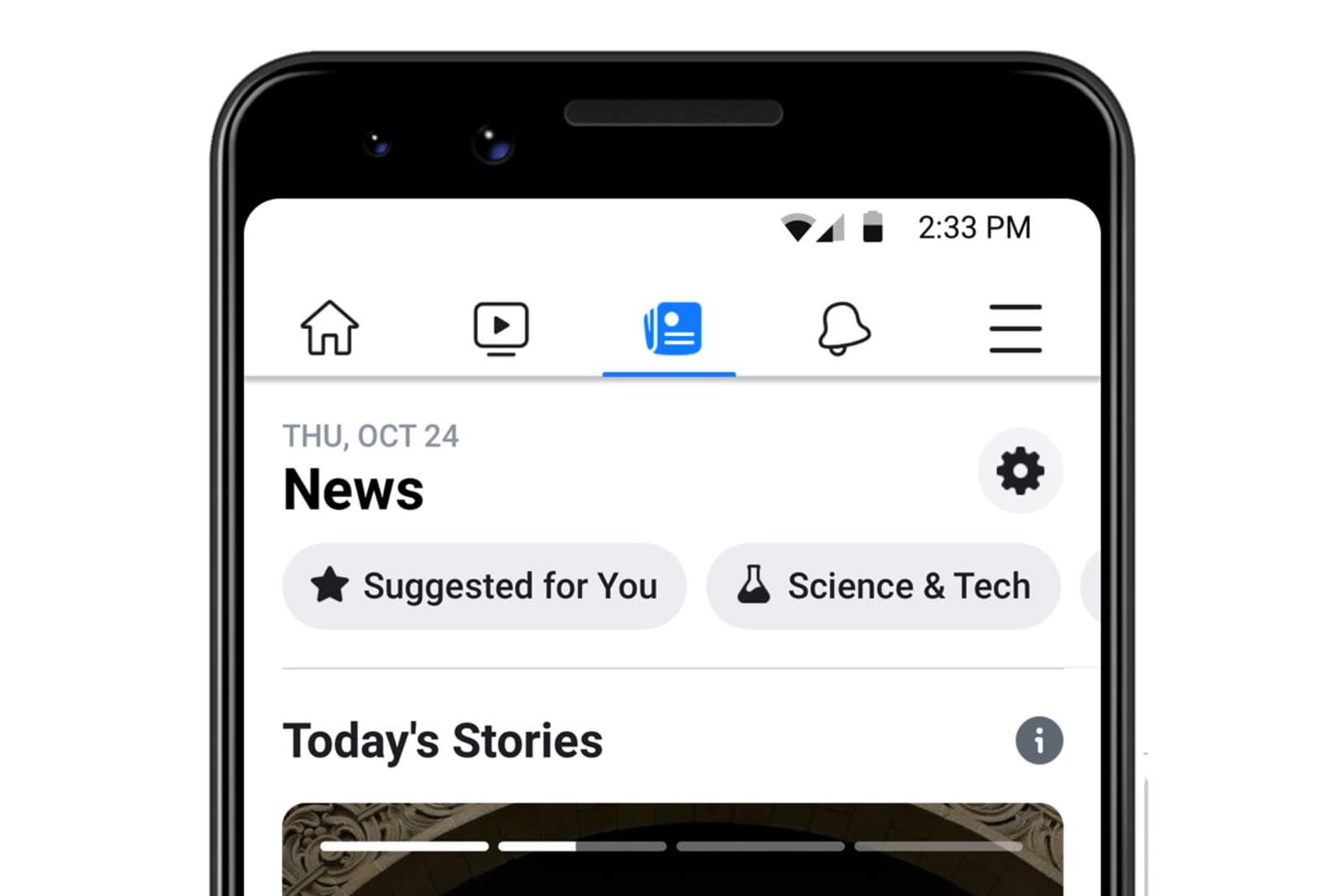 Facebook has announced Facebook News, the revival of its journalism portal that will highlight news it believes is relevant to individual users. The company has begun with an initial test of Facebook News as part of a rollout that will run from now until at some point in 2020. News will both serve up content from providers people choose, but also offer "the most relevant national news stories of the day."

Facebook News will feature personalization, with relevant stories being served based on what content you read. There will also be topic sections designed to cater to your specific interests, including business, entertainment, or science. You'll also be able to link your paid subscriptions to the platform, so that you can read material from within the Facebook app, should you wish to. And users will be able to hide "articles, topics and publishers" they don't want to see.

News won't simply swallow the news stories that are shared in people's feeds, however, but exist in its own tab. The company has said that it will focus, at least initially, on general news, topical news, diverse news and local news. Publishers that want to be involved will have to abide by certain rules on integrity, fact-checking and maintaining Facebook's own community standards.

Only websites that pass Facebook's bar for avoiding clickbait, not spreading hate speech and misinformation will be selected. And they will be "continually" checked to make sure that the criteria for inclusion are being met. It'll be interesting to see how the interaction of news on Facebook's community standards affects inclusion, especially for topics Facebook -- like nudity -- finds problematic.

In a blog post, the company's news team explains that the service won't rely upon algorithms alone, but human curation. The Today's Stories panel, for instance, will be picking long form and originally reported pieces, according to "publicly available guidelines." Rules for what can, and can't, be included will be published on Facebook News, so people can see how moderators make their decisions.

The initial test will focus on large cities and metro areas, including New York, LA, Chicago, Dallas Forth Worth, Philadelphia, DC, Miami, Houston, Atlanta and Boston. Local newspapers in those areas will get preferential access to the platform, it appears, as part of Facebook's drive to highlight local reporting. And the rollout will continue across the US for, at least, the foreseeable future.

Back in 2016, Facebook was criticized after reports emerged that its human moderators were suppressing stories. Two years later, the company would kill off its Trending News section entirely, saying that it would be replaced by a new news product in the future. Since then, Facebook's role in the distribution of misinformation has come under sustained scrutiny from both sides of the aisle.

And, before it even launched, Facebook News has already raised heckles amongst some of the larger news publishers. A few days ago, the Financial Times reported that the site will compensate Condé Nast and Dow Jones for the use of their content. But Reuters and the Associated Press claim that they have not been promised any money. Not to mention that the site has prior form when it comes to its dealings with news publications that leave the latter out of pocket.

In this article: facebook, Facebook News, gear, internet, News, politics
All products recommended by Engadget are selected by our editorial team, independent of our parent company. Some of our stories include affiliate links. If you buy something through one of these links, we may earn an affiliate commission.