The new ultra-slim notebooks are the first to offer the display tech.
C. Low|10.29.19
@cherlynnlow

It might be time to take Samsung seriously as a PC maker again. After releasing a slew of underwhelming laptops, the company charmed me with the Galaxy Book S it revealed in August. Today, Samsung is launching two new laptops that once again have me intrigued. The Galaxy Book Flex and Galaxy Book Ion are thin, light notebooks packing bright, beautiful QLED screens.

Before we go any further, let me explain the differences between the Flex and the Ion. The former is the higher end of the pair. (It's a convertible and can rotate 360 degrees on its hinge to become a tablet.) It also houses an S Pen for you to draw on the screen or to use as a remote control for the webcam and PowerPoint slides -- like you can on the Note 10 and Galaxy Tab S6. The Ion, meanwhile, is a comparatively basic clamshell laptop that's made of a lighter magnesium than the Flex's aluminum build.

Both devices are available in 13- and 15-inch models, and all four new variants are impressively sleek and pretty. The 13-inch models of both laptops have a sharp 12.9mm profile, while the 15-inch variants come in at 14.9mm. I particularly loved the gorgeous blue hue they're available in, and there's also a silver color option that's not as eye-catching but is still nice. The new Galaxy Books join 15 other laptops like the Dell XPS 13 2-in-1 and Lenovo's S940 as part of Intel's Project Athena classification for powerful, long-lasting thin-and-light PCs.

You can think of the Flex as the spiritual successor to Samsung's Notebook 9 Pen and the Ion as the follow-up to the Notebook 9. Both new Galaxy Books come with 10th-generation Intel Core processors and integrated UHD graphics, though you can get NVIDIA's MX250 graphics on both 15-inch models. The larger Flex also offers Intel's Iris Plus graphics as an option.

Most notably, they're the first notebooks with QLED panels, which promise more colors, deeper blacks and greater brightness than OLEDs. Both the Flex and Ion run at Full HD, regardless of their size. The Engadget review videos I pulled up on demo units looked as sumptuous as I've seen on OLED screens.

What's instantly obvious is how much brighter these displays are. You can manually enable an Outdoor Mode. (It's automatic, depending on ambient light on older Samsung laptops.) With this feature enabled, the Galaxy Book Flex and Ion will go up to 600 nits of brightness, which is about 200 nits more than the maximum on the older Notebook 9 Pro. This makes the laptops easier to read under direct sunlight, which I'm very grateful for. Indeed, during a side-by-side demo at Samsung's briefing, the difference was clear. The Galaxy Book was noticeably brighter than the Notebook 9. 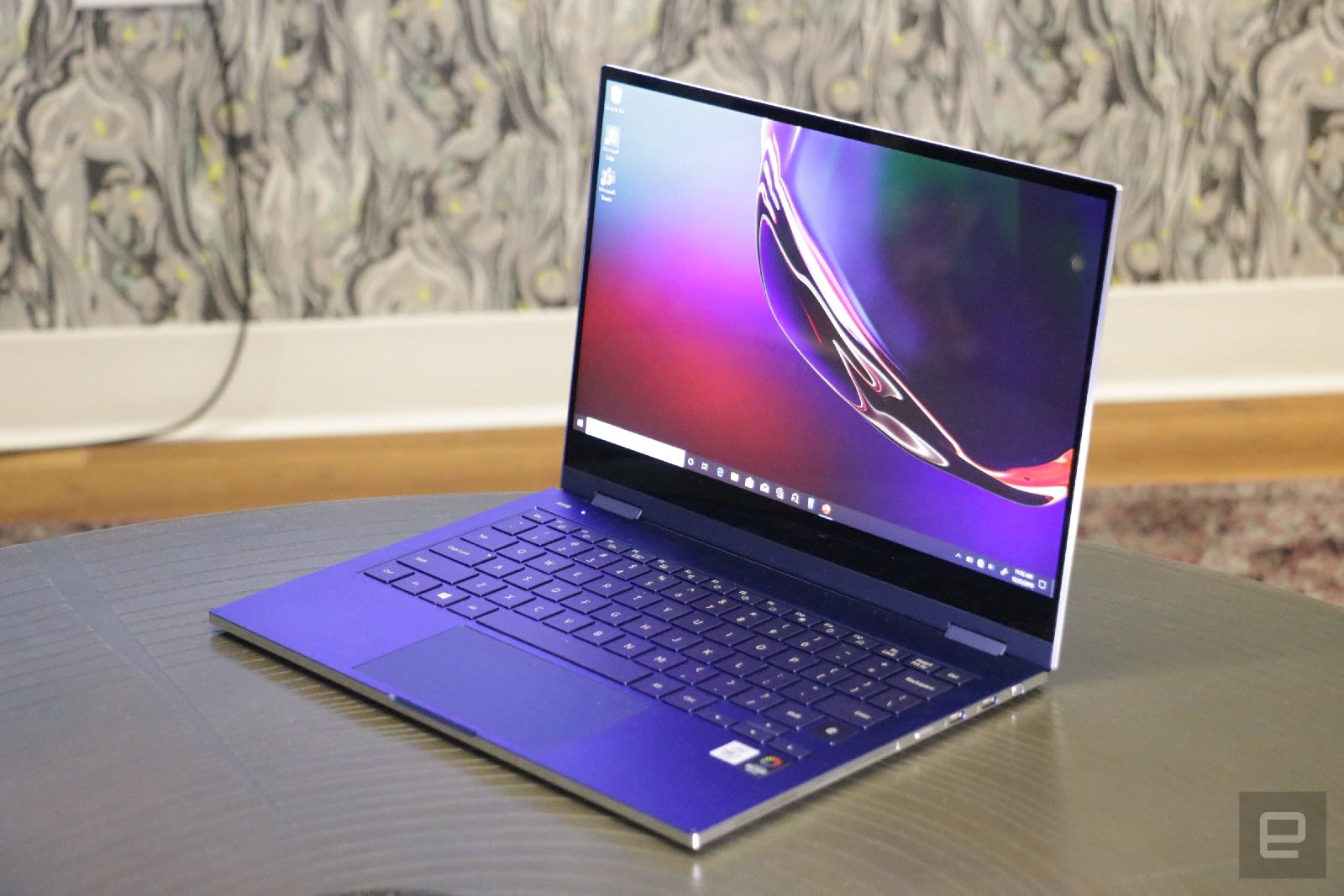 The other big promise with QLED technology is power-savings, so your device can last longer despite being brighter. Samsung said the new Galaxy Books can last "all day" or about 20 hours with their 69.7 Whr batteries. As usual, this is something we'll have to wait till we get the devices in for testing to know for sure.

Another intriguing battery-related feature of the new Galaxy Books is Wireless Powershare. This lets you charge compatible phones and accessories by placing them on the laptop's trackpad. They have to support the Qi wireless charging standard, so that includes the Galaxy Note 10, S10, Galaxy Buds, Galaxy Watch Active and Watch Active 2. According to Samsung, Wireless Powershare provides 7.4 volts when charging a phone and 5 volts when charging a smartwatch. This means it'll take four hours to fully charge the Galaxy S10, the company explained. That's a lot of time to be left without your trackpad, so this might only be a useful feature when you're not actively working on something.

Despite being so thin, both Galaxy Books offer a generous array of ports. The Flex packs two Thunderbolt 3 ports, one USB-C socket, a microSD/UFS card reader and a headphone jack, while the Ion offers a single Thunderbolt 3 slot, two USB 3.0 ports, a microSD/UFS card reader, a headphone jack and an HDMI outlet. The ports selections are the same across the 13- and 15-inch models, which is a nice touch. 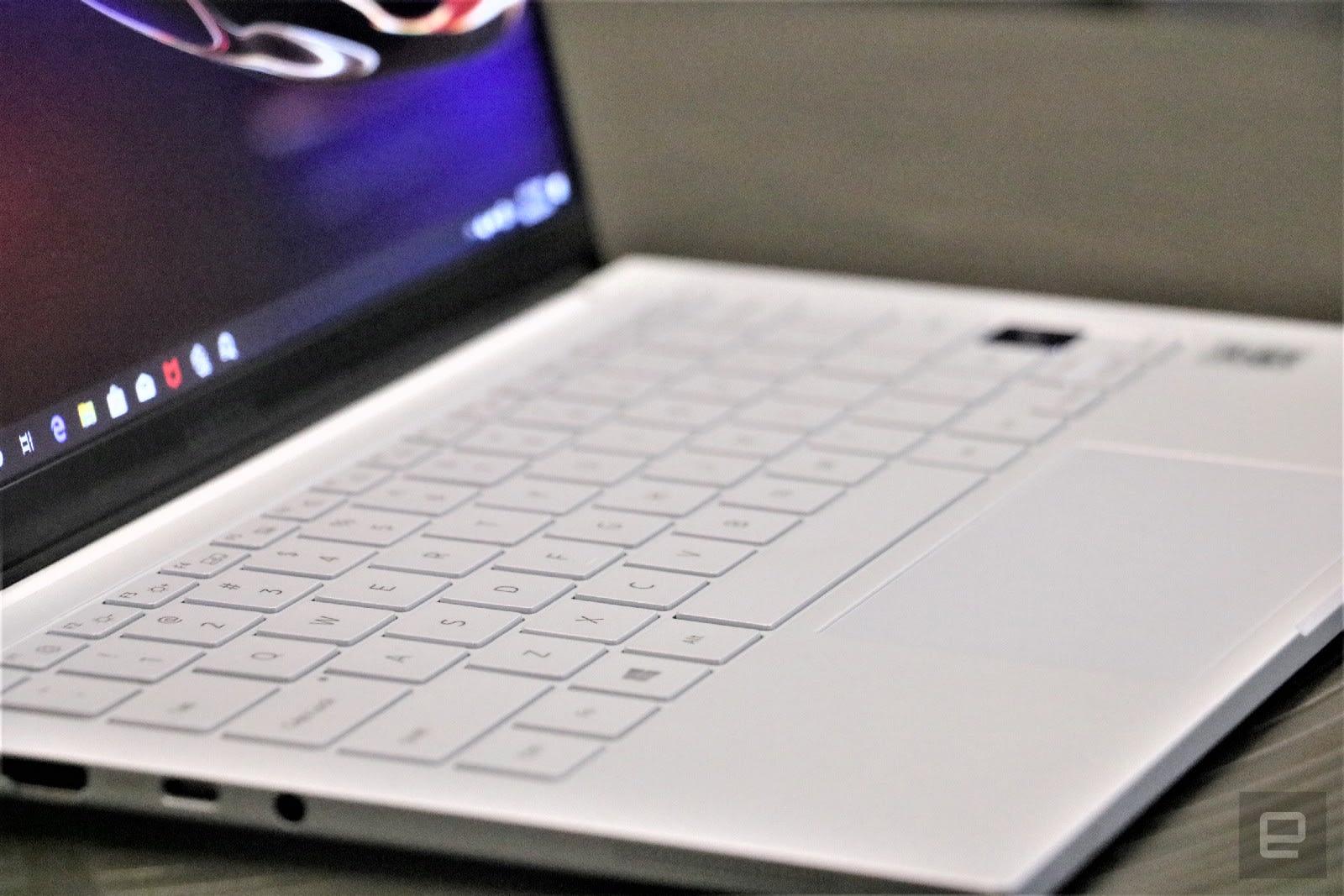 One thing it seemed Samsung had to compromise to make the Galaxy Books so thin was their keyboards. I found the Flex's buttons slightly shallower than the Ion's, but frankly both devices could use deeper keys. To be fair, they're not bad, and I'm probably spoiled by the generously deep travel on my ThinkPad. I could accurately type on both the Ion and the Flex in spite of the shallow keys, thanks to the evenly spaced layout. I also appreciate that Samsung was able to add a fingerprint sensor to the Galaxy Books, which you'll find to the right of a slightly undersized shift key.

While Samsung has yet to announce pricing for the Galaxy Book Flex and Ion, which will both be available early next year, company spokespeople did say they would cost around the same as the Notebook 9s. That's $1,100 starting for the Notebook 9 Pro and $1,400 for the Notebook 9 Pen, which is pretty expensive considering other Athena laptops, like the XPS 13 2-in-1, begin at $1,000. The QLED screen and potentially longer battery life could make the difference worth it, though.