Intel's Project Athena laptops can sense when you're near

They will conserve energy when you're away and wake up when you're back.
C. Low|05.30.19
@cherlynnlow

We've heard Intel talk up its Project Athena program to provide long-lasting, high-spec laptops for months now, and the company finally shared the specifications a few weeks ago. Here at Computex, we're getting our first look at the initial slate of devices that are part of Athena, which include the Dell XPS 13 2-in-1, HP Envy x360, an Acer Swift laptop and the Lenovo S940.

All these laptops are attractive, thin and light devices that meet Athena requirements. That means they should deliver at least nine hours of battery life at a minimum level of brightness (250 nits), get up to four hours of power in 30 minutes of charging, and cost just slightly more than $800. They'll also offer features like Instant Resume, which requires the PC to wake up from sleep in less than a second, as well as WiFi 6 connectivity.

To provide those quick wake times and minimize battery drain, Intel is implementing something it calls user awareness in Athena devices. Through a proximity sensor built into the lid next to the webcam, the system can detect if someone is sitting in front of it. Engadget video producer Brian Oh and I checked out a demo at Intel's technology open house here in Taiwan, and we set the minimum distance and required time away to 50mm and three seconds. 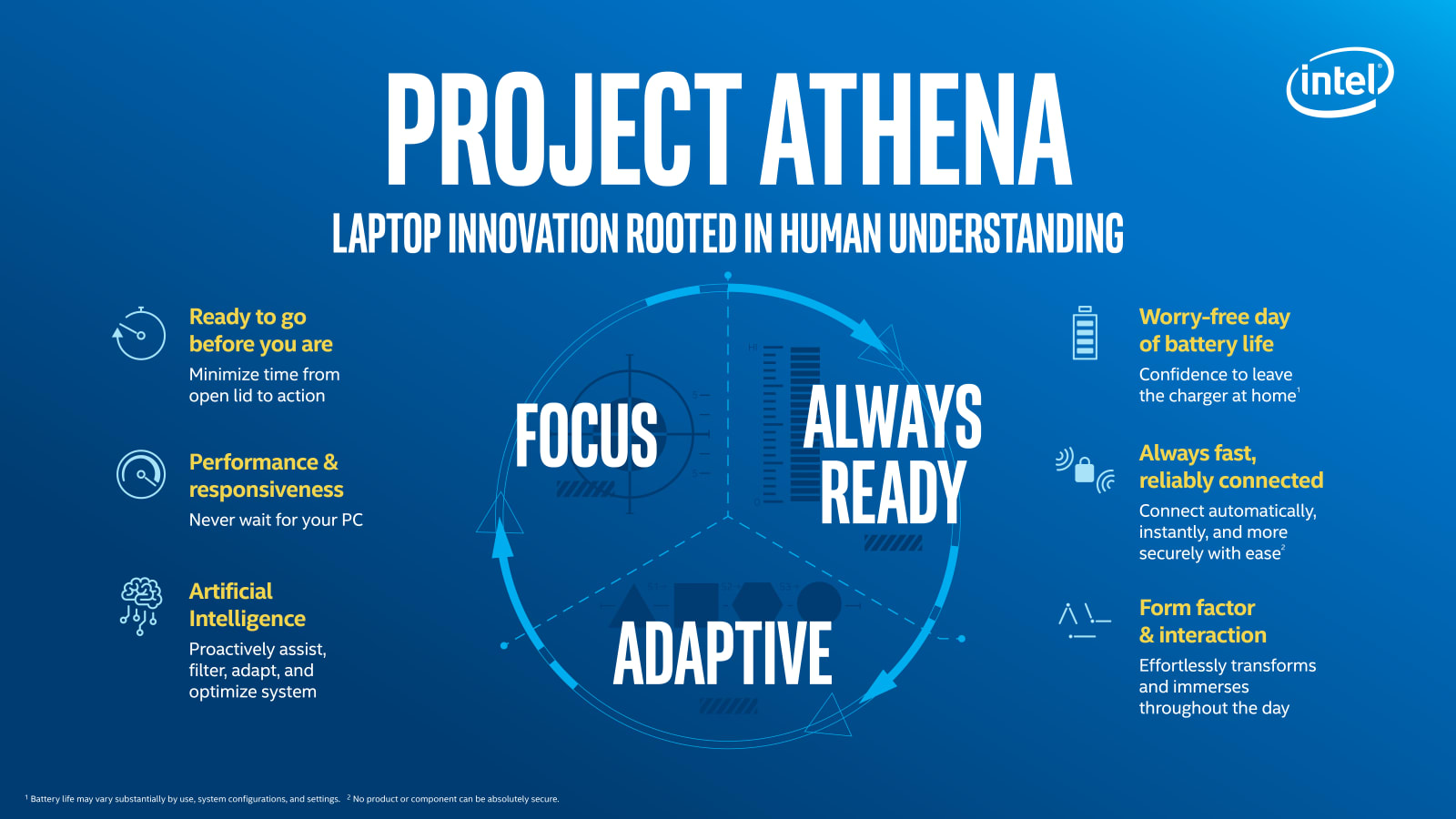 We backed away from the demo laptop and waited the requisite amount of time. The screen started to dim after a few seconds, and a few more seconds after that, the computer shut off and went to sleep. When we got back closer in front of the display, the laptop turned on and the Intel rep on standby quickly unlocked the device with his face via Windows Hello. All told, the sign-in process took just a few seconds from sleep.

Intel's reps also told us that they were working on another method to detect if a user is present. It does that through the onboard camera which scans for faces in front of the computer, and then does basically the same thing it did with the proximity sensor. We checked out a beta version of this, and had to be more careful about what was in the scene. In fact, we had to be so careful not to get any faces in the frame that the Intel rep basically pointed the camera at the ceiling.

A few seconds after it recognized that there were no people in the scene, the system started to dim the screen until it got to the lowest brightness level. When a face came back into view, the display lit up again. During our demo, the laptop was so good at recognizing faces that it had reactivated even from seeing just the side profile of the Intel rep's head. 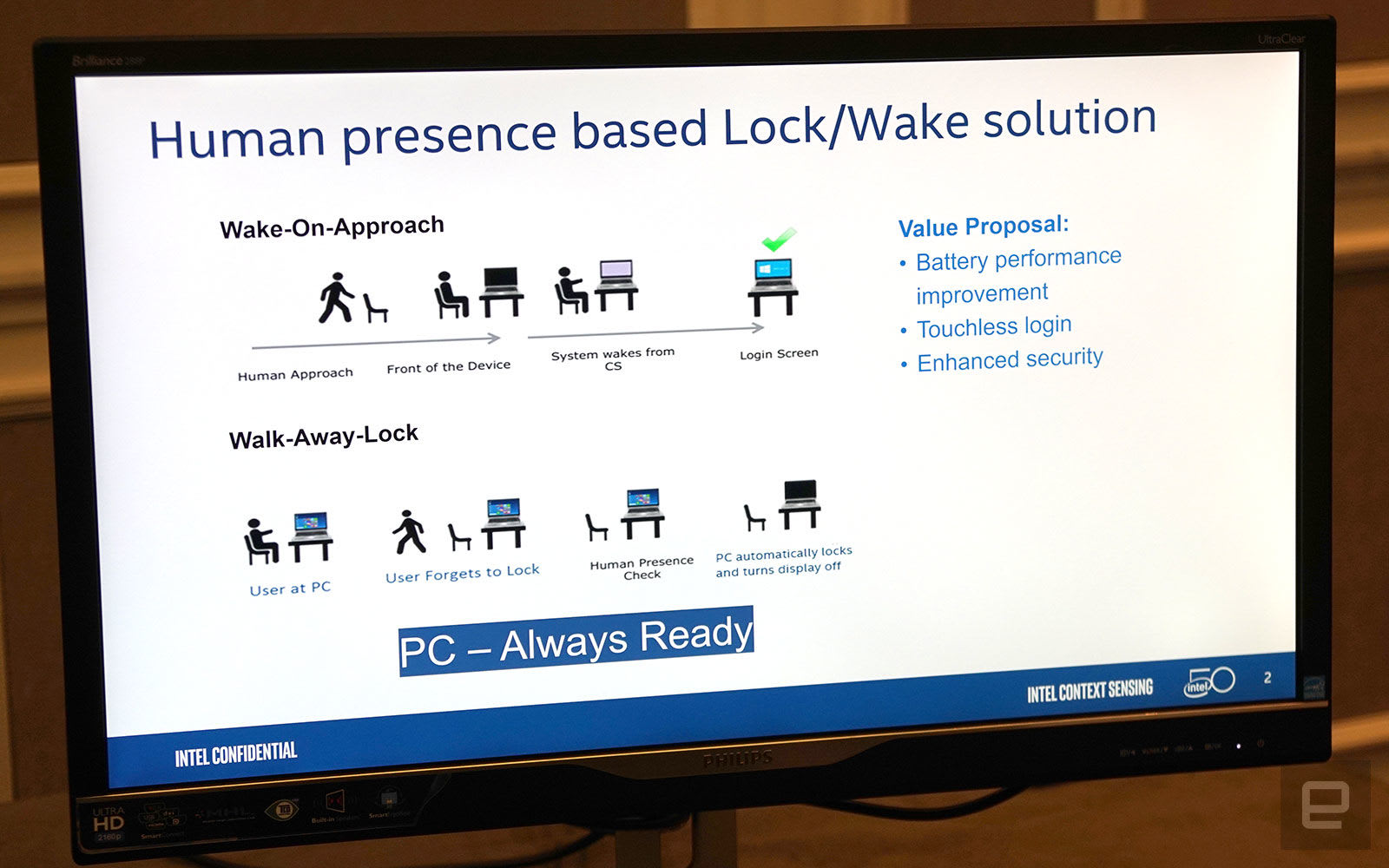 This method is still in testing because Intel needs to iron out some quirks, like how to behave when there are multiple faces in view. Plus, if the system is so good at recognizing faces, it might turn on the device even when passersby walk by.

Project Athena sounds similar to many other programs in the past, like Microsoft's Always Connected PCs, NVIDIA's Max Q or even Intel's own Ultrabook classification from before. While I'm slightly weary of all these new, confusing PC branding plays, I am heartened by the industry's collective efforts to make laptops better. The first wave of Athena laptops will be available by the holiday season this year, so we'll see then if this branding will mean anything to PC shoppers.