Samsung's smartwatch is available today for $280.

In all my years testing smartwatches, I've landed on a few favorites. There was a time when the Fitbit Versa claimed ownership of my wrist, and for a spell the Wear OS-based Skagen Falster 2 was my go-to. But lately, I've found myself returning to Samsung's Galaxy Watch Active. Over the years, Samsung has refined its smartwatch into a stylish, comfortable and capable wearable. And Tizen OS tends to be more responsive, proactive and useful than the software on many other watches.

With the Galaxy Watch Active 2, Samsung continues to improve its health- and workout-monitoring tools as it explores other applications like translation and video playback. Most intriguing of all (to those familiar with Samsung's watch lineup anyway), the Watch Active 2 brings back the company's hallmark spinning bezel. Sort of.

When Samsung introduced the Galaxy Watch Active without the rotating wheel, I have to admit I was shaken. The bezel made it much easier to navigate the interface. But Samsung had to keep the Active series simple, and the wheel added to the weight and cost. The company found a compromise with the Watch Active 2 by making the bezel touch-sensitive, so you can scroll through widgets and notifications by dragging your finger around the face. There's also satisfying haptic feedback here that mimics the feel of it clicking into place.

But while I used the physical bezel to interact with previous Galaxy watches more than half the time, I barely used this virtual one at all. When I did, it was more for the novelty factor and to feel the haptic response than to get any improvement in speed. Eventually, I just rearranged my widgets so the ones I used most frequently were within two or three swipes from the home screen. This is by no means a ding on Samsung. It just means Tizen's OS has become easy enough to use that I don't feel the need to zip through endless pages of apps to find the one I want.

It's also possible that I find it easier to navigate the Watch Active 2 because of its slightly bigger screen. The original Watch Active's 1.1-inch screen felt cramped, and though the 40mm Active 2's 1.2-inch screen is just a teeny bit larger, it feels a lot roomier. The new Active also comes in a 44mm model with a 1.4-inch display, which is even more spacious.

Samsung also tweaked the button on the top right of the watch, making it a little bigger with a textured outline so it's easier to press. This lets you jump back a page, or if you long-press it, it brings up a shortcut you can define. By default this launches Samsung Pay, though I prefer to put music controls here. The smaller, more-recessed button below this takes you to the home page or turns the device off. 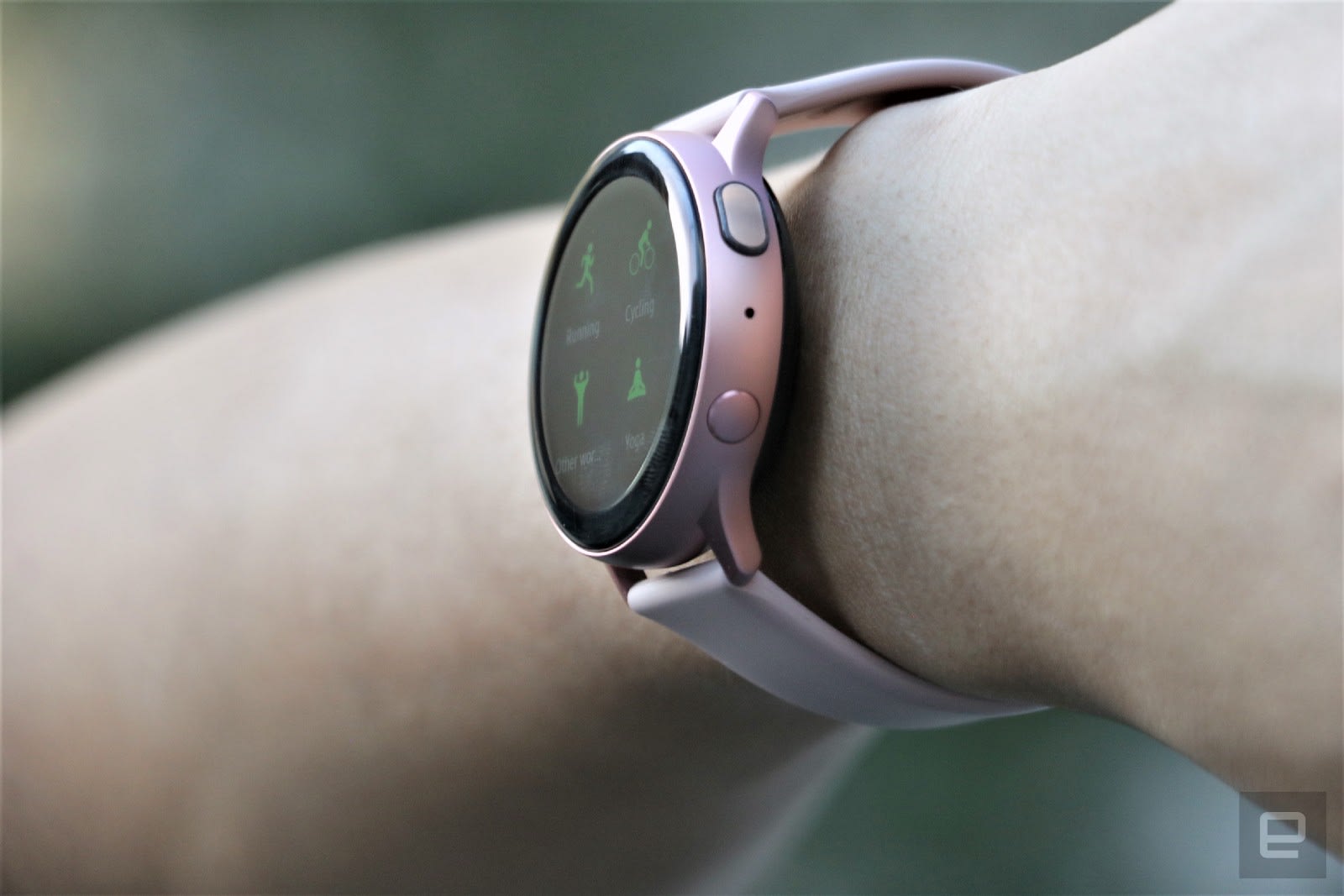 The new back button didn't make a huge difference in my experience. If anything, it was a little too easy to accidentally hit and would pause my workouts when I bent my wrist back a little too much, say when I was getting into backbends or handstands in yoga.

What felt like a more meaningful improvement were the upgraded sensors. Samsung used twice as many LEDs in the Active 2's heart rate sensor, making it faster at reading your pulse. It also has an accelerometer that's supposedly twice as sensitive as before. I can't tell you exactly how much more precise these sensors are, but I did notice the speed improvement. It was not only quicker but also more accurate at recognizing when I'd stood up from my desk and taken a stroll, promptly congratulating me when I'd done so. The Active 2 was also better at automatically detecting when I'd embarked on a brisk walk than any other watch I've tested, showing a screen that tracked my pace and distance traveled once I had been walking for longer than 10 minutes. 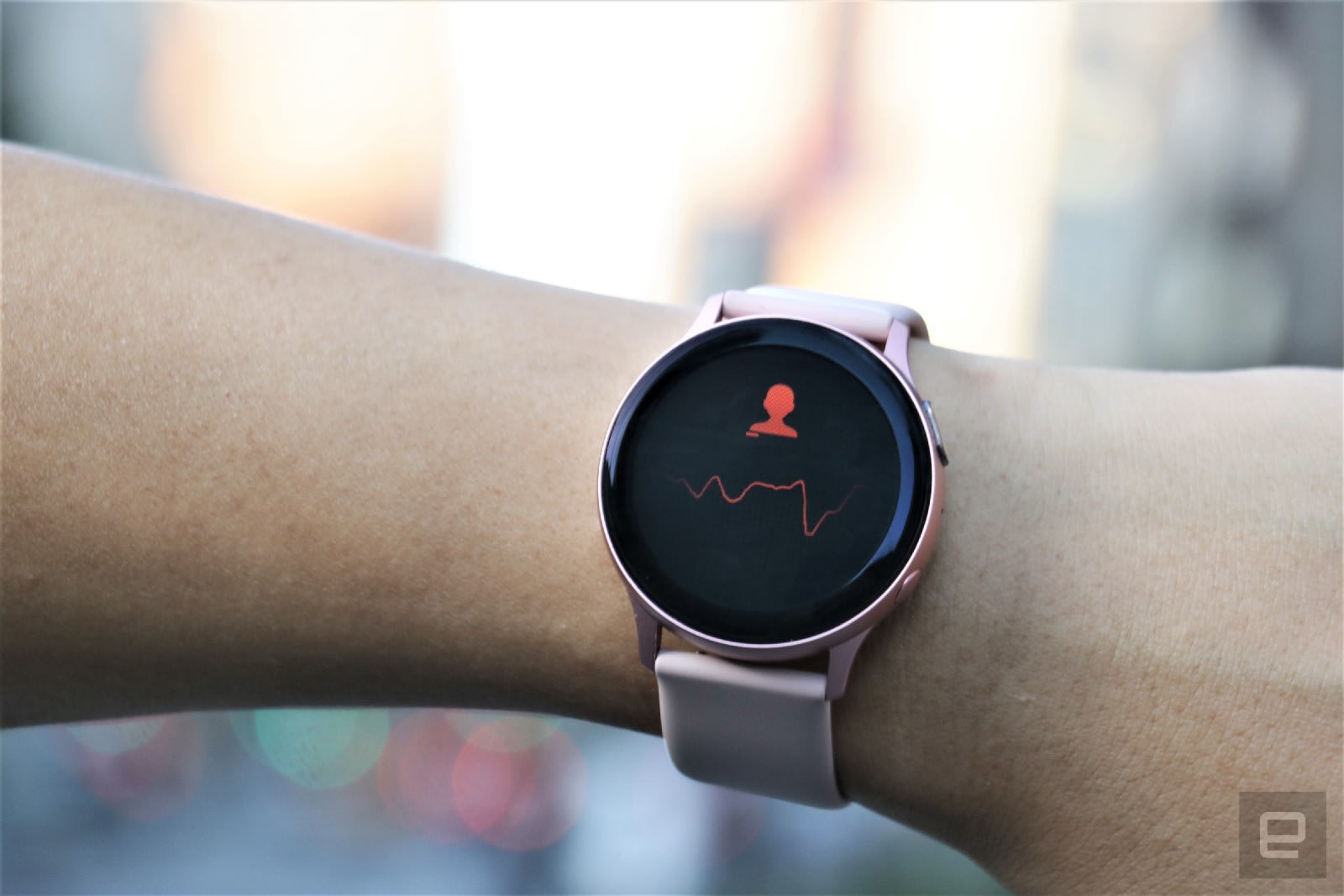 I like how proactive Tizen is at encouraging you to move more and automatically charting your activity. I wish its workout-tracking tools were a bit more sophisticated though. When I started a yoga session, for instance, all it did was measure the duration and my pulse throughout the class. Competitors like Garmin are starting to log things like respiration and stress levels for similar activities. Samsung is catching up a little by adding a pacing coach that will tell you to either speed up or slow down as you're running to hit your stride or time goals. I liked getting the real-time reminders while I jogged, though I recommend you connect your headphones over Bluetooth to hear the suggestions. I could barely hear the Active 2's speakers over the sound of traffic, even when I put my wrist to my ear.

But what the likes of Garmin, Fitbit and even Wear OS lack are the breadth of tools offered by Tizen. It packs a robust selection of health-centric features like proactive movement reminders, stress detection, calorie tracking and sleep monitoring, and it also enables things like smart home control, ride hailing, music playback and messaging. It even lets you turn your watch into a controller for your PowerPoint presentations, if you want. Wear OS and Fitbit OS support these things, sure, but often you'll need to install apps to do them. On Tizen, many of these functions are built in. 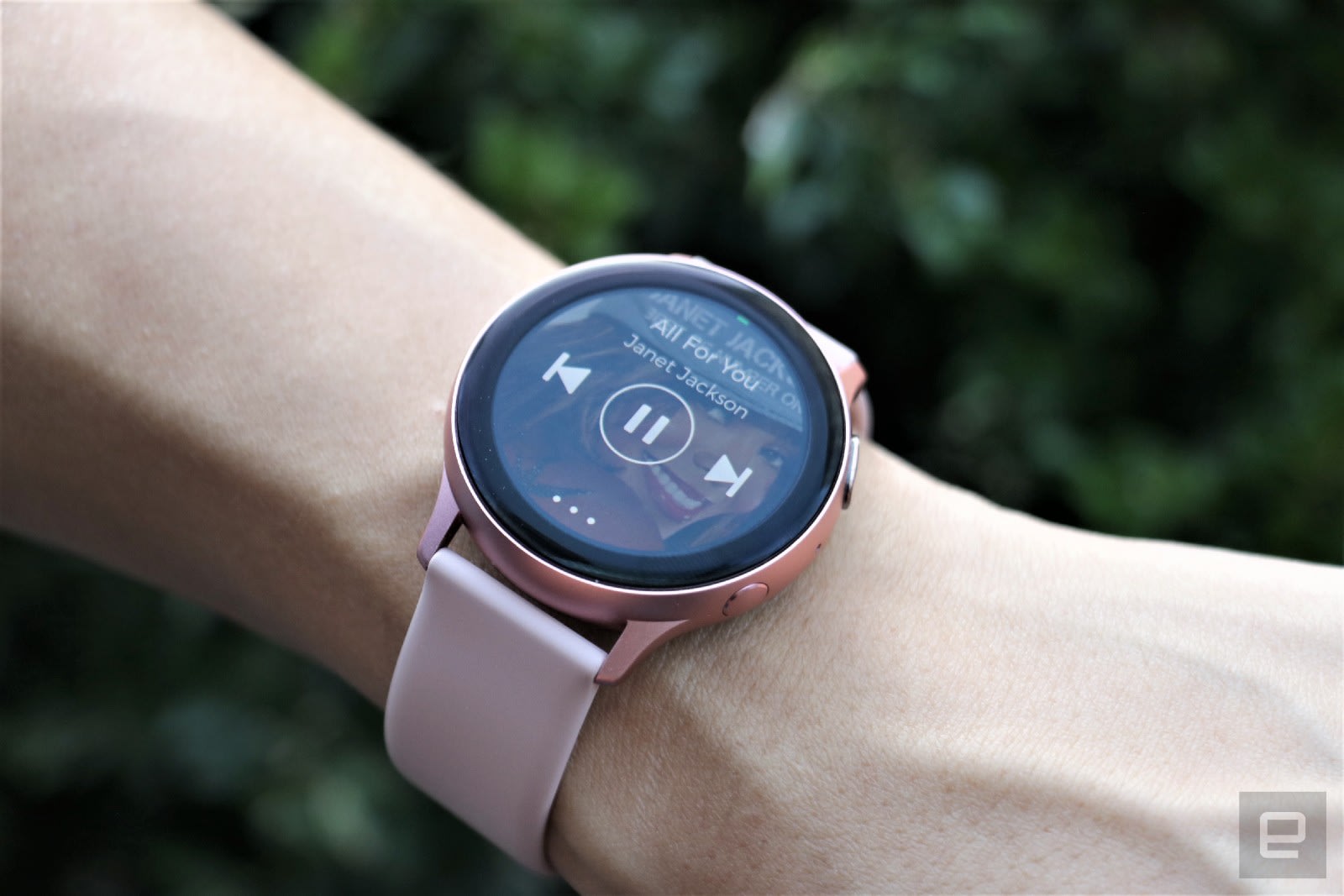 Samsung continues to improve Tizen in both big ways and small. One of the smaller but actually useful tweaks the company made is improving the login experience for the Spotify app. Just sign into your Samsung account and when you open the app on your watch, it's ready for use: You won't have to enter passwords all over again. I was surprised at how seamlessly this worked. All I did was sign into my Samsung account at the start of the Active 2's setup process. I wish this would spread to all other apps on Tizen.

The company also made apps to improve the experience for YouTube and Twitter on the watch, called Watch Viewer for YouTube and Watch Viewer for Twitter, respectively. I wasn't able to find these in the Galaxy app store and wish they had come pre-installed. I do think it's a bit silly to try to watch a video on your wrist, but maybe this is helpful for people who simply can't wait till they get off a crowded train to pull out their phone for, say, a Marvel movie trailer that just dropped. All in an effort to avoid spoilers, perhaps? Frankly, I can't find a solid use case for this feature.

Another new tool that I found underwhelming is the My Style watch face. It generates a bunch of wallpapers for your home screen based on photos you take. Say you're wearing a pastel pink outfit and want a watch face that matches your look. You can snap a selfie and select a section of your shirt. The app generates about six geometric patterns in the color you pick, and you can set them as your background. The thing is, I didn't like any of the patterns, and often the colors in the picture were a few shades darker than in real life.

The good news is, you can choose any other watch face that suits your taste and ignore My Style altogether and it won't ruin your experience with the Active 2. It's a capable device that was speedy during my testing and generally lasted about a day before needing a charge. But I was expecting more, honestly. Pretty much every non-Wear OS smartwatch clocks in with at least two days of battery life. Plus, I'm using a non-LTE version of the Active 2. The cellular model will probably have even shorter runtime. 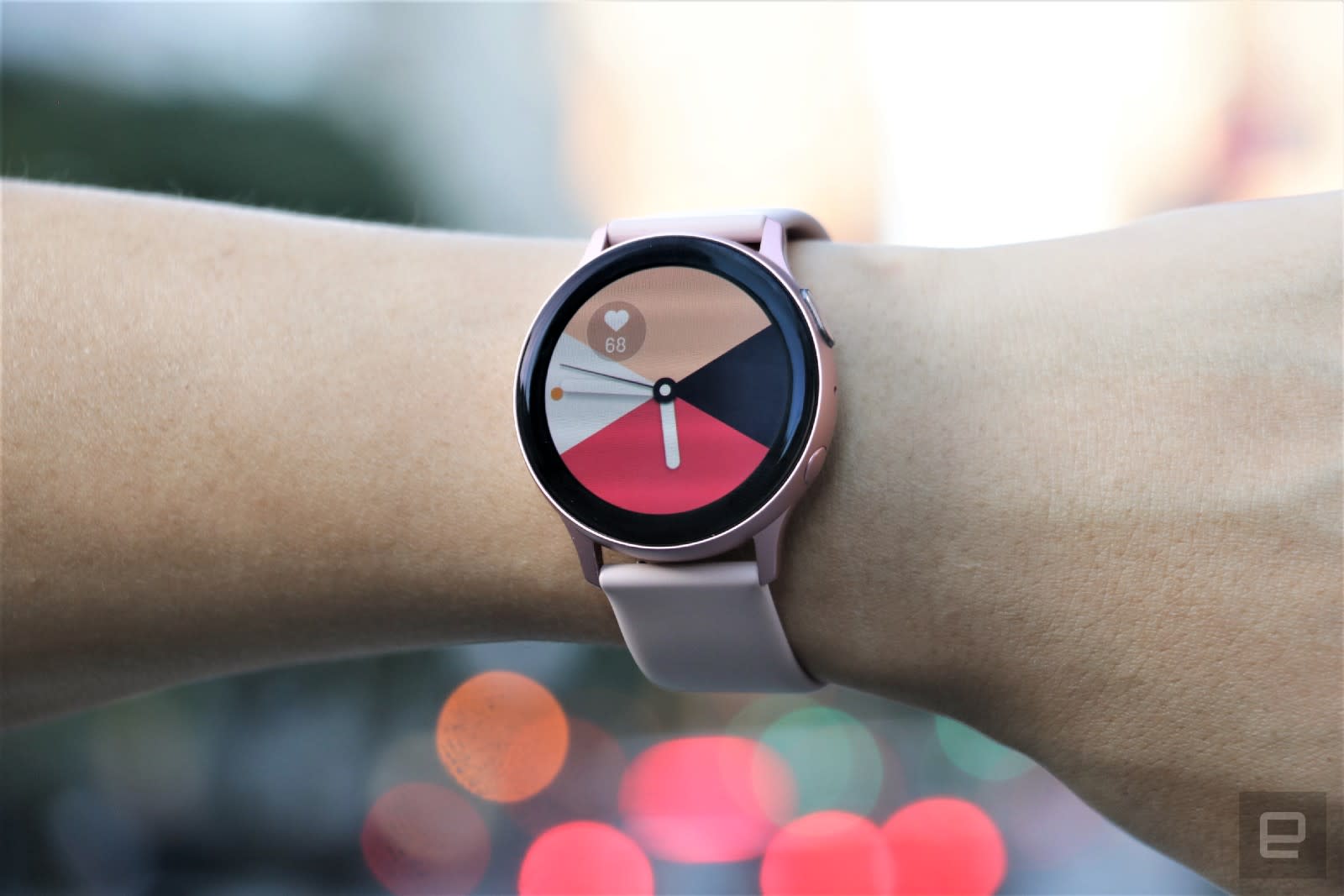 That's my biggest gripe about the Watch Active 2, which is otherwise a well-rounded smartwatch. At $280, it's cheaper than most Wear OS watches and Garmin's new Venu series, but it costs more than the Fitbit Versa 2. Samsung's watch does a lot more than the Versa 2, though, and doesn't have the connectivity issues that plague Fitbit's devices. If you're looking for a smartwatch that will keep you motivated to stay healthy as well as serve as a reliable companion to your phone, the Watch Active 2 is a solid choice.

All products recommended by Engadget are selected by our editorial team, independent of our parent company. Some of our stories include affiliate links. If you buy something through one of these links, we may earn an affiliate commission. All prices are correct at the time of publishing.
Galaxy Watch Active 2 review: A solid midrange smartwatch
gadgetry
gadgets
galaxy watch active 2
gear
mobile
review
samsung
smartwatch
wearables