Garmin is known for its capable fitness watches, but it doesn't have the best reputation when it comes to style. That's about to change, thanks to a slew of new devices the company unveiled today at IFA 2019. In addition to different case and band options for devices like the Vivoactive 4 and 4S, as well as various designs for the entry-level Vivomove, Garmin also showed off a whole new range of watches called Venu. Not only do these come in four attractive case color options, but they also stand out for being the company's first wearables with AMOLED screens.

These new panels enable a brighter, more colorful interface that makes the Venu feel more modern than its siblings, which either use black-and-white displays or "memory in pixel" technology that's reminiscent of e-ink. A full-color display allows Garmin to add new animated workouts to the Venu, with a cartoonish model demonstrating how to perform moves like a bench press or a warrior pose.

Speaking of yoga, the company also added features to its yoga workout tool like respiration- and stress-monitoring. This is possible through new respiration tracking that counts your breaths per minute via the Pulse Ox blood-oxygen sensor on the Venu. As a budding yogi, I'm particularly psyched about the new yoga features. The company also added similar pilates-related tools to its already-vast library of activities.

Garmin is attempting to make full use of the 1.2-inch 390 x 390 AMOLED panel by enabling live watch faces, and I quite liked the billowing cloud animation that I saw on our demo unit. The company also updated its OS slightly to feature a health stats page that you can access by swiping up on your home screen. Here, you'll see your current heart rate, respiration, stress and "Body Battery" levels. That last metric is something Garmin users will find familiar -- it's the company's way of gauging how much energy you have by calculating your heart rate, stress and activity so far. Keep scrolling down, and you'll see more information, like charts of your activity and pulse over the past few days.

It's important to stay hydrated, and Garmin wants to help you stay on top of your water-drinking efforts with a new hydration-tracking feature. You can log the amount of water you've drunk a day, but the Venu also estimates your sweat loss to see if your body is dehydrating. Unfortunately (or thankfully, considering how exhausted and jet-lagged I was), I didn't get to test many of these fitness- and wellbeing-focused tools out during our preview. 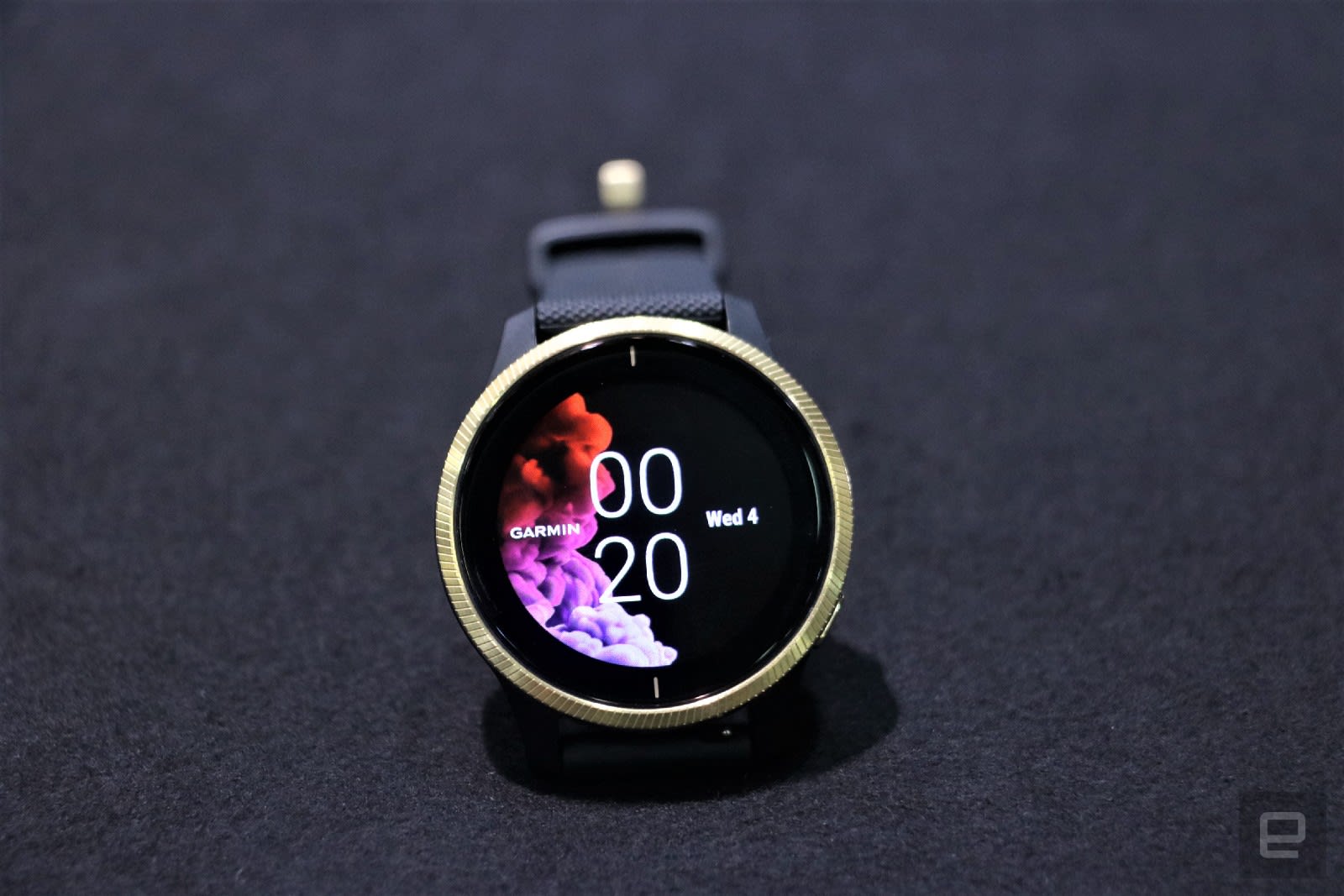 Like other Garmin watches, the Venu will have GPS built-in and offer long battery life. In fact, even with the new panel technology, Garmin is anticipating you'll get up to five days on a charge, and up to six hours if you have GPS and music enabled.

It's not what's inside the Venu that has me excited for the new watches though. I'm most taken by the four color options -- black, gold, light sand (silver) and rose gold, as well as the attractive Milanese bands.

I'm also really stoked for Garmin's new Legacy Hero watches. They're the company's first Disney smartwatches and are basically the Vivoactive 4 skinned to match Captain Marvel and Captain America. You'll get special goal-achievement animations and themed interfaces based on the characters, and the watches' physical aesthetic evoke the heros' essences. I like the Captain America one in particular because of its rugged lumberjacky design, except it's definitely too big for my wrist. The Captain Marvel model is the right size, but I prefer the bigger model's brown-and-blue color scheme. Both devices have the characters' famous quotes printed on their undersides, too -- something fans like myself will appreciate.

The Venu is only available in a 43mm size, but that felt pretty comfortable even on my relatively small wrist. At $400, the new wearable is costlier than Samsung's Galaxy Watch Active 2 or the Fitbit Versa 2, but it has a ton of fitness-centric features that should tempt the workout fiends among us. It'll be available later this month, so you might want to wait till we get a unit in for testing before splashing your money on one.