The gym can be a dull, boring place for some of us. Myself included. Fortunately, you've got a smartphone -- or an MP3 player. Whether it's for a music streaming service, a finely curated list of ripped tracks or a backlog of podcasts, what you need now are some workout headphones. It's 2019, and while not all wired headphones will work with your smartphone of choice, all phones have Bluetooth.

There's also the fact that moving around with headphones, whether for a bench-press session or a run around the block, is better without wires. As long as your headphones stay put, that is. That's why all of our recommendations are wireless models.

We've pulled together a few picks that should suit most workouts. While you can expect decent audio quality from all of them, decisions about workout gear, come down to personal preferences. Because of that, we've included over-ear models, noise-canceling champions and some reasonably priced headphones that punch above their weight. 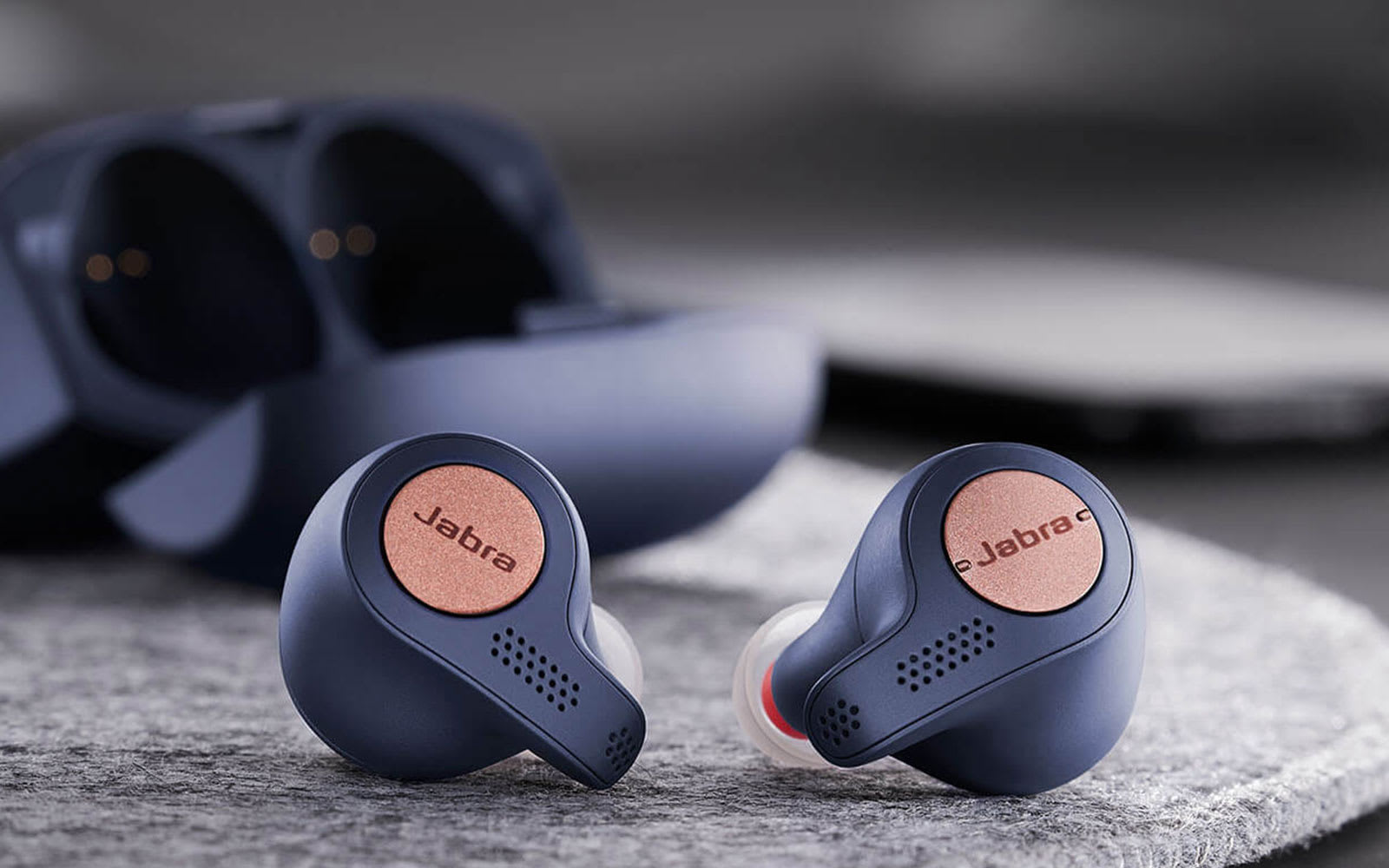 Jabra's Elite 65t earbuds are a long-running favorite here at Engadget. The Active update added some elemental protection to the mix, with an IP56 water resistance rating to ensure it withstand a little sweat. (There's a two-year warranty included, too.)

While recent models have supplanted these buds as the best overall true wireless headphones (and we haven't even yet reviewed Apple's new AirPods Pro), the Elite Active 65t remain a great option for in-the-gym audio. The earbuds fit snugly, and there are buttons on each bud allowing you to control the volume and skip tracks without taking out your phone. The Elite 65t Active last for just under five hours of playback, while the case adds another 10 hours of juice. Some niggles: The case charges over micro-USB, and the buds do stick out a little. Also, compared to true wireless headphones with Apple's H1 audio chip (like AirPods and Beats' most recent headphones), they occasionally lose signal if you've left your phone on the other side of the gym. 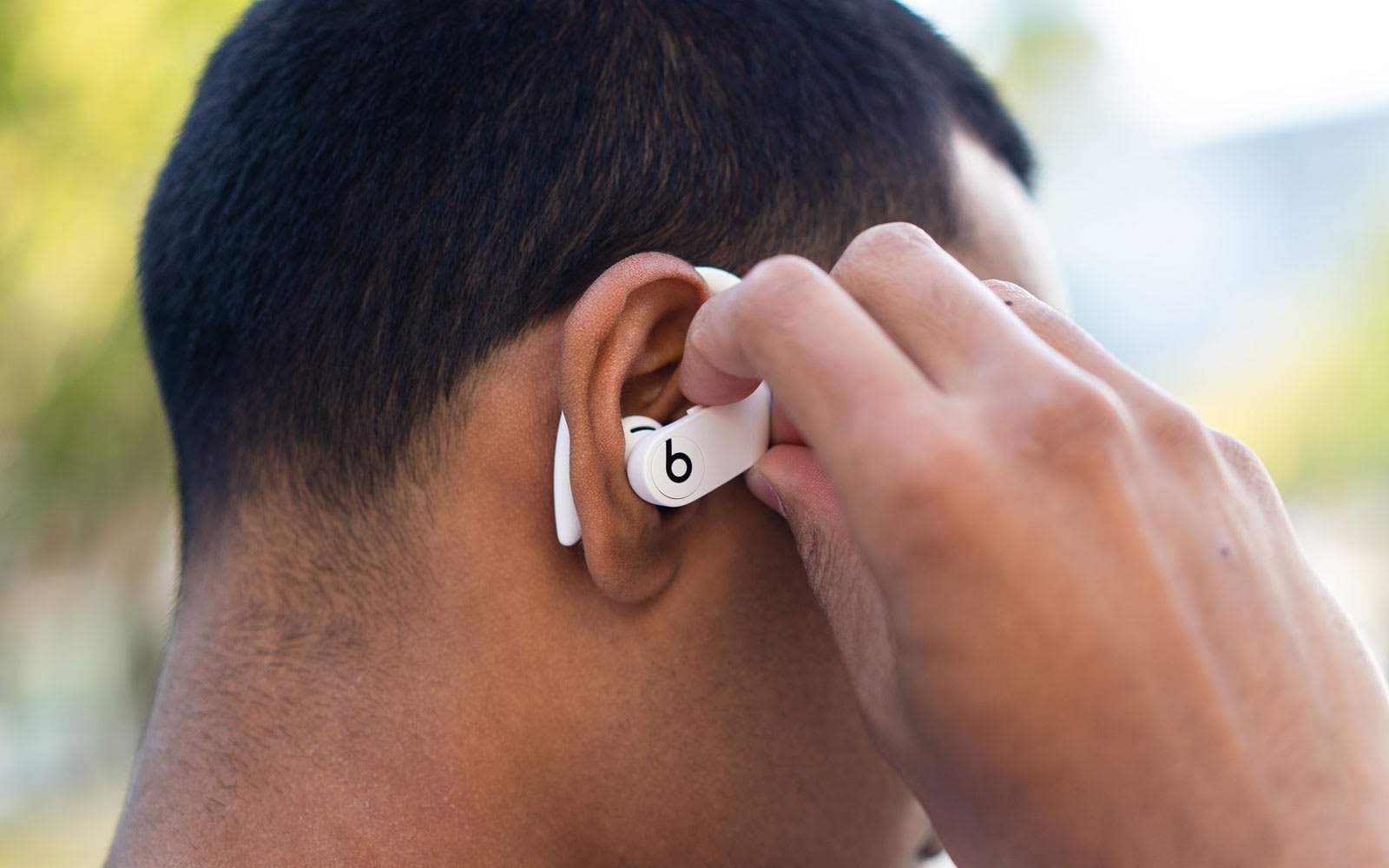 Beats' first true wireless headphones marked a change in how the company delivers music. It's no longer all bass (although these hooks are still plenty bassy enough). Instead, you'll notice a much more even sound profile. The PowerBeats Pro also pack Apple's H1 audio chip to help keep a steady signal and make pairing with iPhones especially swift. Oh, and Siri is always at the ready to help with voice commands.

True wireless earbuds typically depend on a snug fit to stay in place, but the Powerbeats' hook design is my favorite design of them all. In the process of losing that final wire, the PowerBeats Pros have also undergone a subtle redesign that ensures they don't stick out as much as before. While I like the hook design, if you wear a hat or glasses during workouts you might find these a tad uncomfortable compared to in-ear buds. Each earphone pauses automatically when you remove it from your ears, while accelerometer sensors will put the buds in sleep mode when they're idle, thereby saving battery life. Speaking of the sort, the PowerBeats Pro buds should last around nine hours, if not longer, with the excessively bulky case boosting playback time to a max of 24 hours.

Indeed, the case might be the only major drawback. The sheer heft of the thing aside, it's only rechargeable through a Lightning port. Which means you need one of Apple's cables to charge it. iPhones are everywhere, yes, but Lightning cables aren't always.

The PowerBeats Pro are sweat and water resistant, with a rating of IPX4. That means they can handle a splash of water without being damaged, but you shouldn't dunk them in water. 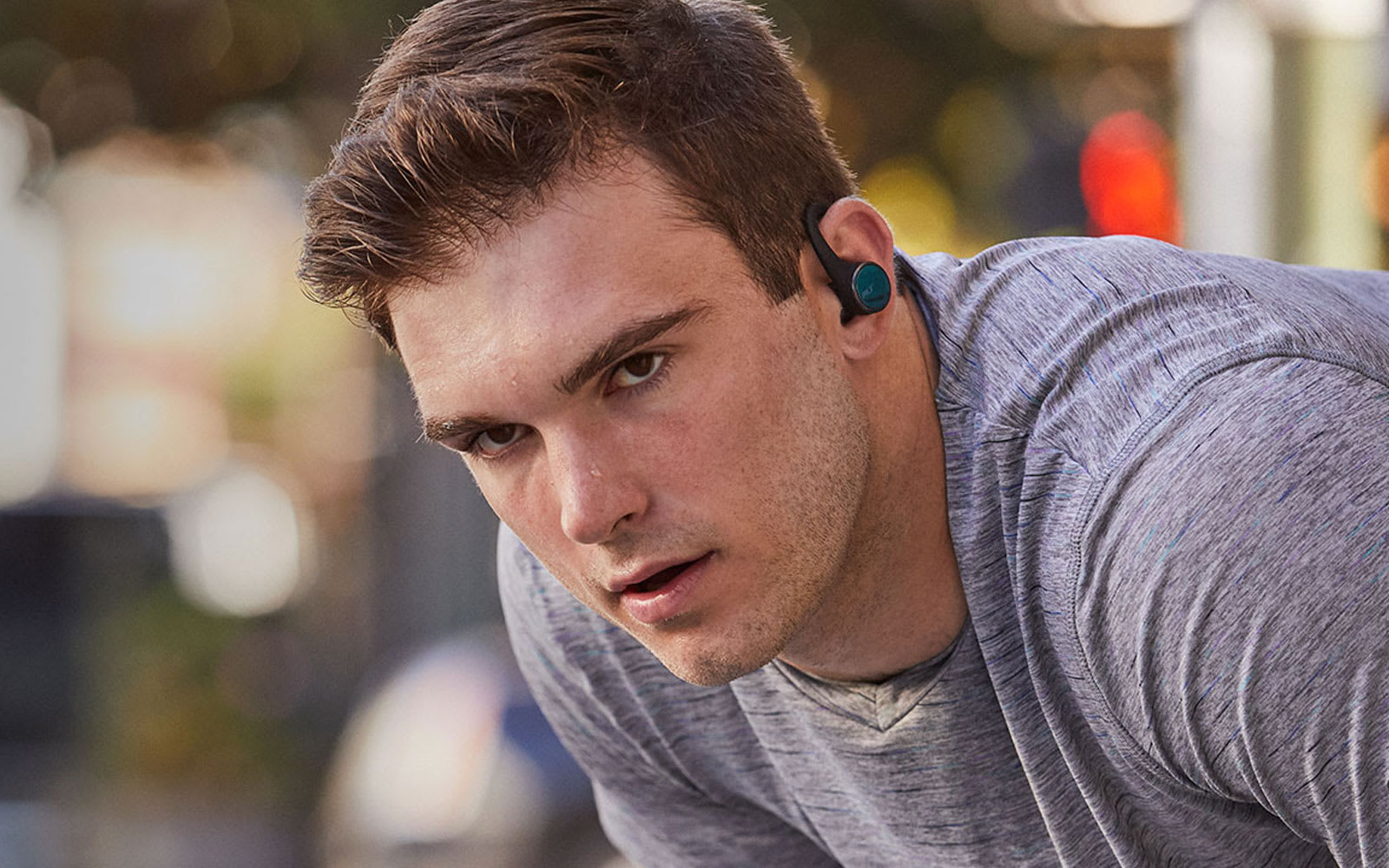 Poly's BackBeat Fit 3150 have an over-the-ear loop design similar to the Powerbeats Pro, but if you don't like sealed buds blocking out all of the surrounding noise (say, if you need to be aware of traffic), Poly's Always Aware eartips let in ambient noise, making them ideal for running.

The fit is a little too loose for me, but if you prefer the feel of Apple's AirPods, for example, this may be the ideal solution. The Backbeat 3150s have an IP57 water resistance rating, so rain or sweat shouldn't be an issue either. Poly, formerly known as Plantronics, has added a new Bluetooth chipset that sends audio to both earbuds and helps to improve range. A word of warning, however: Initially pairing these with my iPhone was a struggle. The BackBeat Fit 3150s paired easily enough with my laptop and Android phone but didn't want to play with iOS devices. I had to update the headphones' firmware through an Android device -- that resolved the problem.

Despite a less-than-airtight fit, audio quality is clear. You might not hit the same bassy notes as the PowerBeat Pros or Jabra's various earbuds, but the trebles are nuanced enough and clear. None of this is surprising -- there are bound to be drawbacks with this style of eartips. The hooked buds have a rather cool, luminescent blue hue to the buttons, too, which I like.

With this updated model, Poly also improved the battery life to eight hours on the buds and an additional 16 hours in the charging case (micro-USB, sadly) -- an improvement over some of our other picks. As is the price. At $150, they could save you a chunk of change versus some competing options. 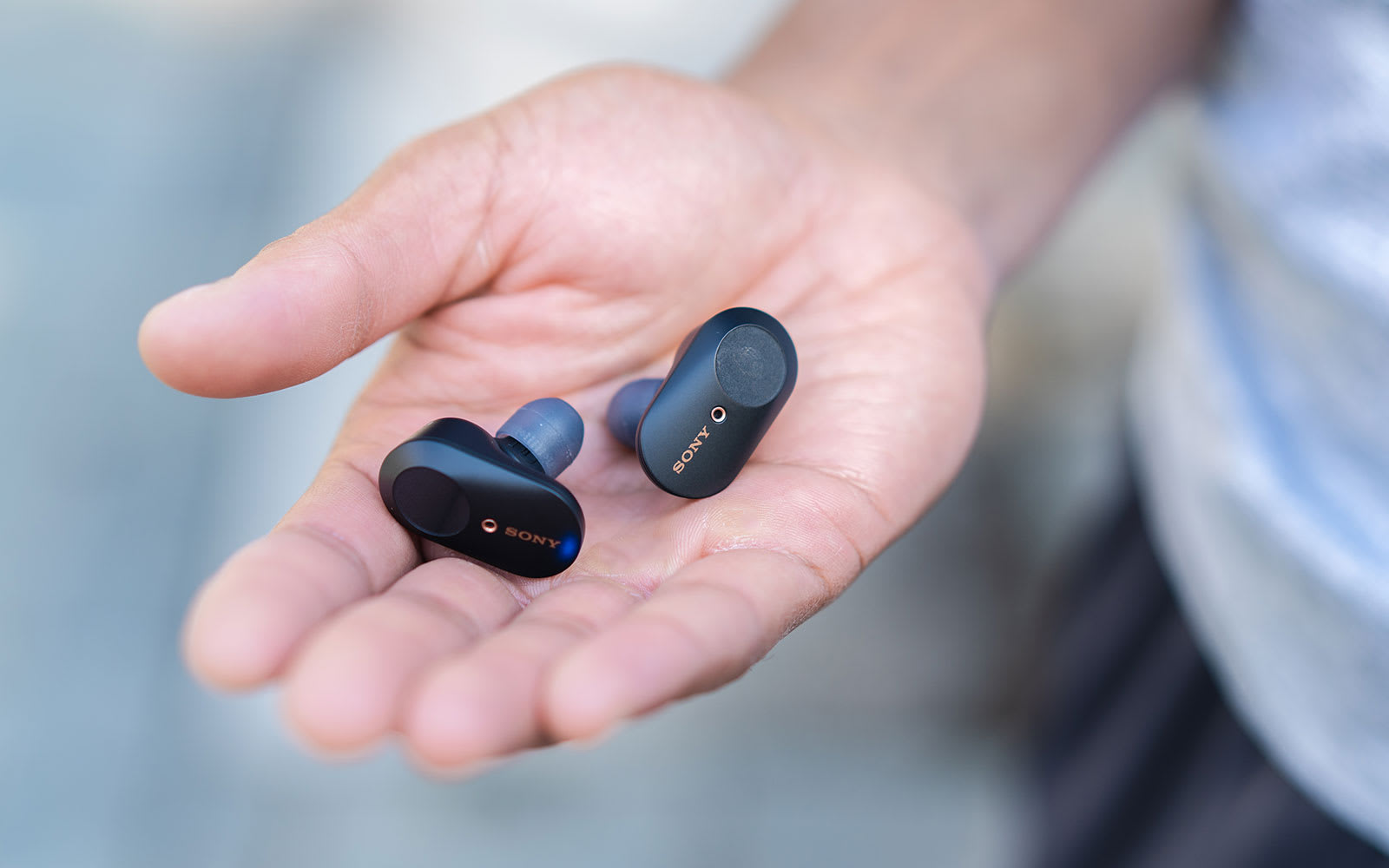 Alright, big spender. You want the best audio from your gym headphones, and you've come to the right place. Perhaps you want to drown out gym noise entirely during your yoga session, or you need that motivational soundtrack on full-blast as you hit the treadmill. We've praised Sony's latest noise-canceling buds, and while the company hasn't positioned them as "workout' headphones, the snug fit, unrivaled noise cancellation and great sound quality meant that I had to include them, their steep $230 asking price be damned. For what it's worth, this is also one of the few options with USB-C.

Sony has also added an extra grippy rubber surface to the 1000XM3s, keeping the buds in without the need for hooks. Just a note, though: There's no IP rating on these, something sweatier athletes will want to keep in mind. Eventually, Sony might want to consider making a hardier version of these earbuds. Maybe you just don't want in-ear buds but still want wireless. Don't worry, we get it. If you belong to a particularly sociable gym (or need to spot others, borrow plates and generally communicate with your fellow gym rats), a traditional banded headphone is what you're looking for. The over-ear BackBeat Fit 6100 is relatively easy to wipe down, and the headband is perforated for breathability. There's also a really... unique feature for keeping these on your head: a "beast mode" tether that loops on two different pegs for the best fit. Sound quality is rich, if a little heavy on the bass, with the design helping to isolate other noises. If you don't want headphones that look like they're made for the gym, these might be the option for you -- they're actually kinda classy.

Continuing our tour, a giant panel on the side offers simple play-pause, track navigation and volume controls, with an ambient noise button on the bottom of the right cup. Poly says the headphones should be good for over 20 hours of playback, no case needed. $180 are, however. 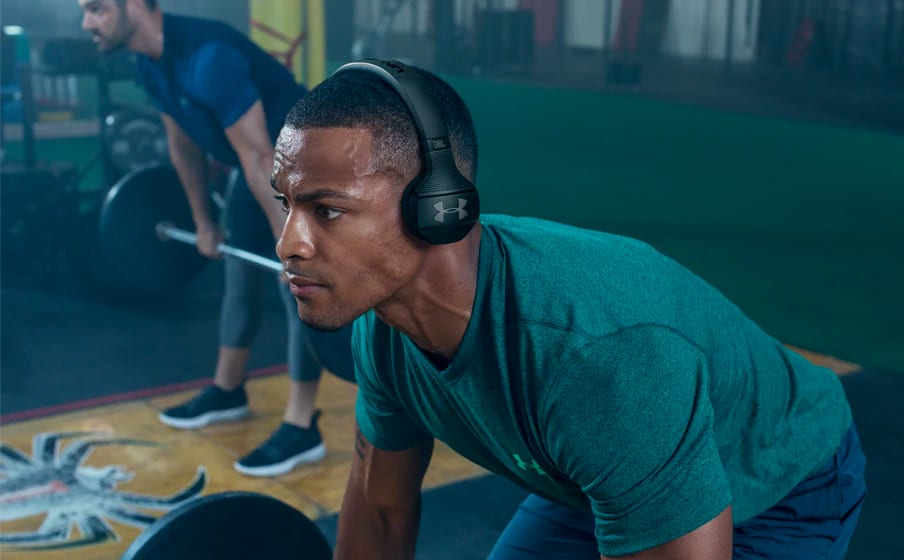 If you're looking for on-ear headphones, JBL and Under Armour's Sport Wireless Train headphones sound good, fit well and have machine-washable pads to keep things fresh. The audio quality is relatively balanced, and while the cans don't completely cover your ears, not much noise bleeds in during your workouts.

I was also pleasantly surprised by how comfortable the design is. The fit is perfect, at least for my head, with enough tension to stay on without really pressing into your ears. To adjust the fit, you have to extend the arms -- that's the only option, unfortunately. Each of those arms fold in under the headband, ending in a compact package to throw into your gym bag or the accompanying ruggedized case. If you need to top-up, there's a micro-USB cable included -- you'll need to provide the USB port to plug it into. Compared to the Rock collaboration from the year before, they now cost $50 less, at $200.

ENGADGET'S GUIDE TO FITNESS AND HEALTH 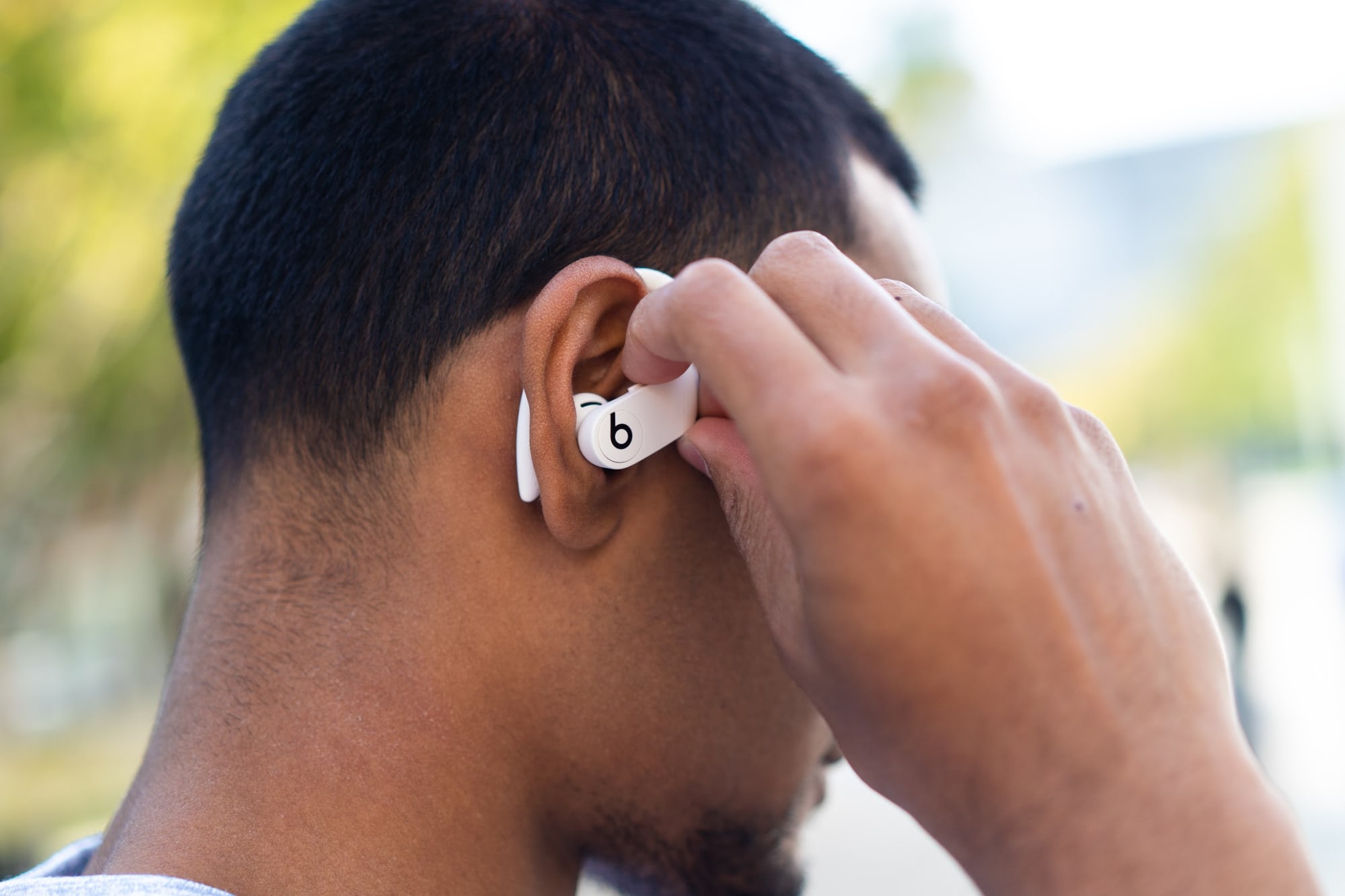