Kids today are growing up with a lot of screens in their lives, despite the advice of pediatricians. One of the things they get a lot less of in playing with devices is the development of more tactile skills, which are usually learned by manipulating toys and other physical objects. Over the past few years we've seen companies try to remedy this by introducing products that marry the real and virtual worlds, where physical play is required as part of a video game. Now game developer Bandai Namco and art tech company Iskn are teaming up with their own take on the idea: Tori. Kids can pilot a spaceship or wave a wand in real life and see how it plays out in a fantasy world on their tablet.

Iskn is the maker of The Slate and Repaper, products that translate drawings made with pen and paper into digital copies instantly. They're great for artists who've never quite gotten used to or liked drawing on a Wacom tablet or iPad. A piece of paper is placed into the device's frame, and there's a special ring you slip onto your favorite pencil to record its movements. Tori borrows some of the same tech: there's a white slate, similar in design to a Wacom pen tablet, that uses magnetic fields to track the movement of the accessories being played with. The core of the accessories is a small magnetic called the "Power Bar" about the size and shape of an AA battery that can be inserted into any number of contraptions sold for the system; the explorer kit available at launch includes a spaceship, a wand and a catapult.

The games available for this inaugural kit are pretty easy to understand at first glance. The space game, Crystal Chase, wants you to steer the ship on the screen by moving the one in your hand, and the catapult in Jungle Rescue is exactly what it sounds like: a catapult that you pull and release to shoot virtual rocks on the screen. The wand game, Shades of Light, is not as obvious at first but it's still fairly simple — you use the wand to turn objects on the screen so they match up with a shadow on the wall. 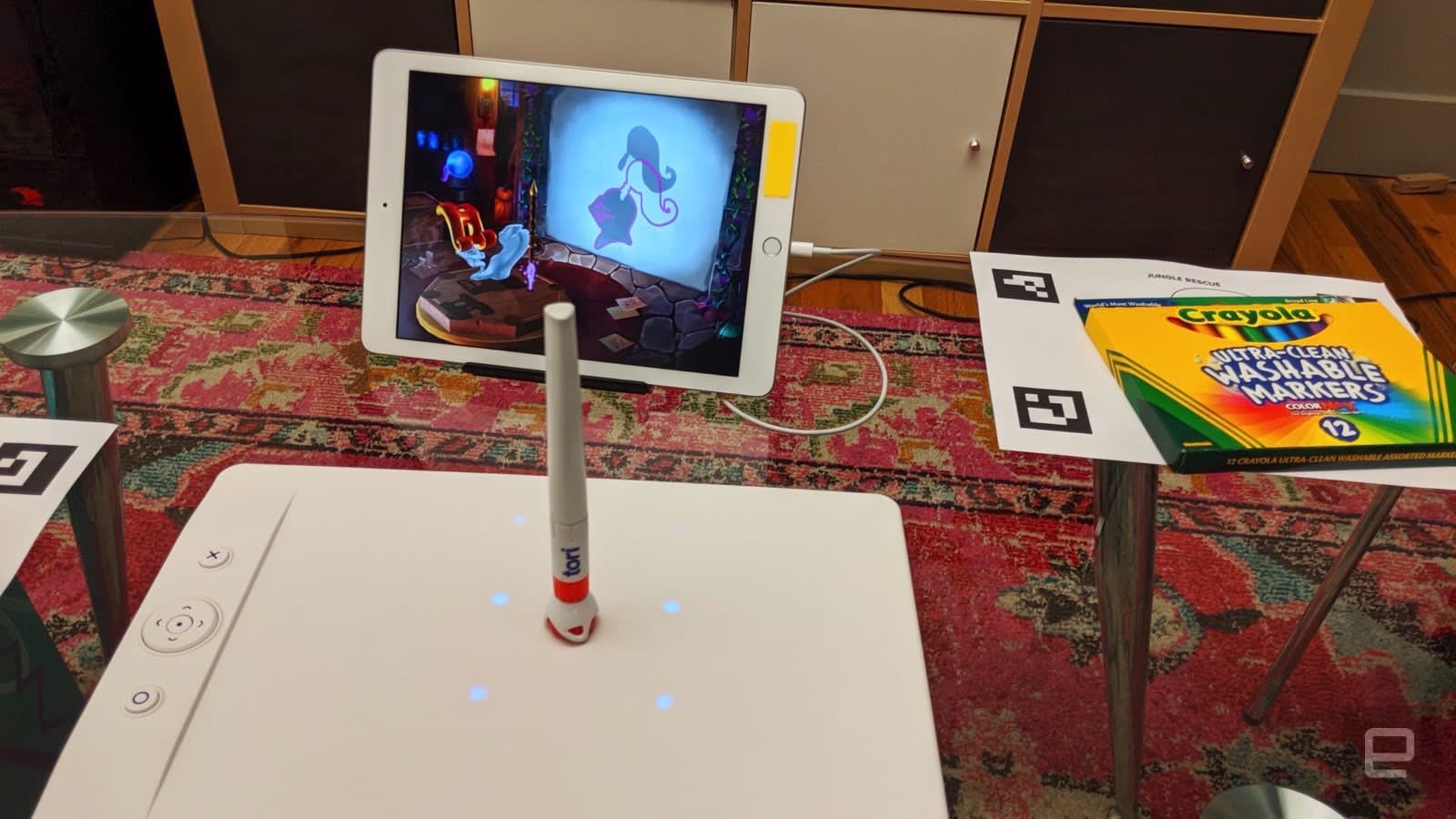 Tori reminds me a lot of the early days of playing with the Wii, when that system's games were more experimental with different types of actions you could do with the Wiimote, as well as the plethora of accessories you could snap onto to your motion controller. Nintendo even sold a steering wheel for Mario Kart and a Wii Zapper that came with its own exclusive Zelda game, Link's Crossbow Training.

The Nintendo influence becomes even stronger when you see what else the explorer kit has to offer. Iskn hasn't quite abandoned paper with the Tori; instead, the kit includes cardboard templates for constructing your own spaceship and decorating it, as well as coloring pages of scenic elements like trees and flowers. The pages can be photographed with your tablet's camera and the designs imported into the games so now it's your child's spaceship in the game, and your child's patterns on the foliage. It's definitely got a Nintendo Labo vibe to it, even though Bandai says that Tori's been in development for over two years, more than a year before Labo was even announced.

The Explorer Pack is available today for $169 and includes the Tori board, Power Bar, three accessories, four cardboard spacecraft templates and a book containing a number of designs. The pages can be photocopied so you'll never run out, but more pages will be available for download from the Tori website as well. As for the games, all four are free to download for iOS or Android, with more to follow over the next year.