The video-recording glasses have grown up, but they still have limited appeal.

In case you've forgotten, Snap makes video-recording sunglasses called Spectacles. The first two iterations didn't do very well, and you had to go to a special vending machine to pay $130 or $150 a pop. Despite lukewarm reviews, Snap is isn't giving up on Spectacles just yet. In fact, it's ready to launch the third-generation. In addition to a glam makeover, the Specs 3 feature a second camera for depth effects that feature prominently in the company's push into augmented reality. Snap's goal here isn't to sell a million units, though. It's more of an experiment to see how people use AR in hopes that it can learn enough to finally make it "a thing".

But Snap is also hoping that all those early adopting influencers out there will learn a thing or two about creating AR content. Most importantly, though, the third iteration of the product showcases the lessons Snap has learned from its earlier hardware efforts.

Spectacles 3 prove that Snap's glasses have seriously grown up. The frames are far more stylish — it's like they can now afford to shop at Gucci instead of H&M. They also feel much more premium, thanks to new metal build. The glasses are also lighter and fit better than before. Even the LED ring above the lens that indicated when you were recording looks classier. Instead of individual LED bulbs appearing in a circle, the Specs 3 show a continuous line thanks to a filter that diffuses the light.

Aside from the design, the major upgrade here is the addition of a second HD camera. Now, there's a sensor over each eye, which give the Specs some depth perception. There are also two buttons — one on each side of your face, that you can press to start recording a ten-second clip or hold down for a still image. As before, you don't have to do anything to stop recording. Just push down and the device captures 10 seconds of footage. And if you want to capture more, just keep hitting the button five more times to continue shooting up to a minute of video.

The first benefit of the dual camera setup this is that the Specs can now take what the company calls 3D Snaps. It's a little hard to describe, but think of these like Portrait mode photos, but sort of in 3D. Your subject is rendered almost like a pop-up against a flat background. When you move your phone around, you'll see more of your subject's profile — like you're looking around a corner.

This works best when you can get some distance between your subject and the background, otherwise the effect is either completely unnoticeable or the back of your friend's head becomes a weird blob melted into what's behind them. Snap also recommends you get close to your subject for the best results — between three and fifteen feet away.

The other thing the added depth enables is smarter AR effects called 3D filters that you can add to your clips in Snapchat. On regular Stories, this is typically a flat overlay on your footage, like flowers falling all over your screen. With the Spectacles 3, the animated effects actually interact with your scene. So instead of flowers just falling straight down, they'll actually bounce off of tables, chairs and other surfaces. It's a little gimmicky, but they're fun to watch and play with. 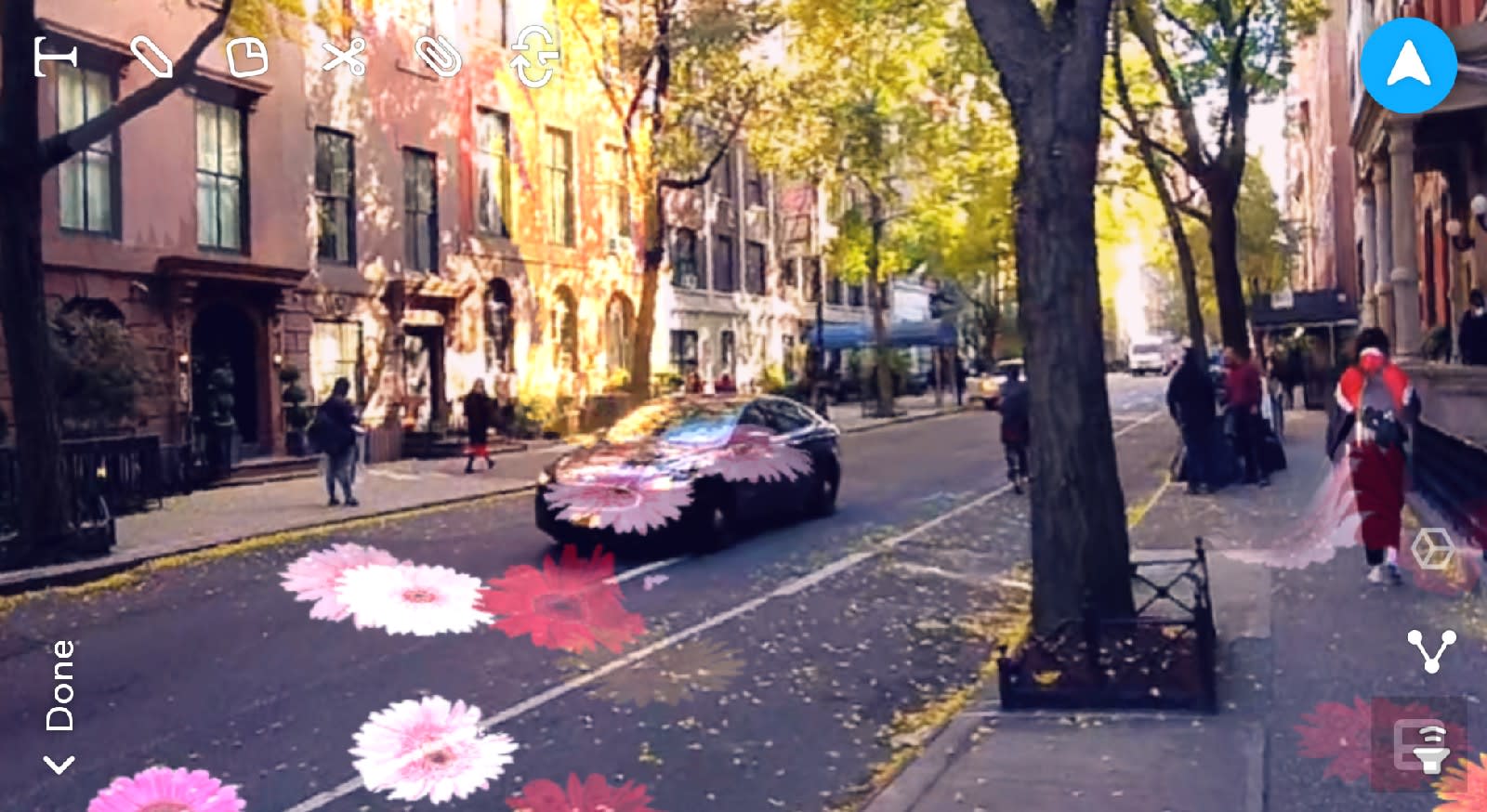 I have to give Snap props for what it's been able to do with its depth-mapping. The Specs record stereoscopic 3D videos that I can launch in VR and watch in a headset. Real trees that I walked by on a Chelsea street had depth and dimension, even before I converted the clip to 3D. The falling flowers filter I mentioned before didn't just bounce off tables and chairs, but they also cascaded down the sides of buildings as if they were painted onto the bricks, then slouched onto the ground, gathering like leaves on a pond's surface.

I really enjoyed how aware these animations were of the environment. One of them displays faux red and silver heart-shaped balloons all over, and not only do they land on top of desks, but they also disappear behind pillars, showing up if you look behind the obstruction. This occlusion adds to the immersiveness of the filter and makes it feel more like physical objects interacting with the real world.

Currently, there are only 10 filters available, but Snap says it will continue to add new effects to keep things fresh for users, just like it does for regular shots from your phone. 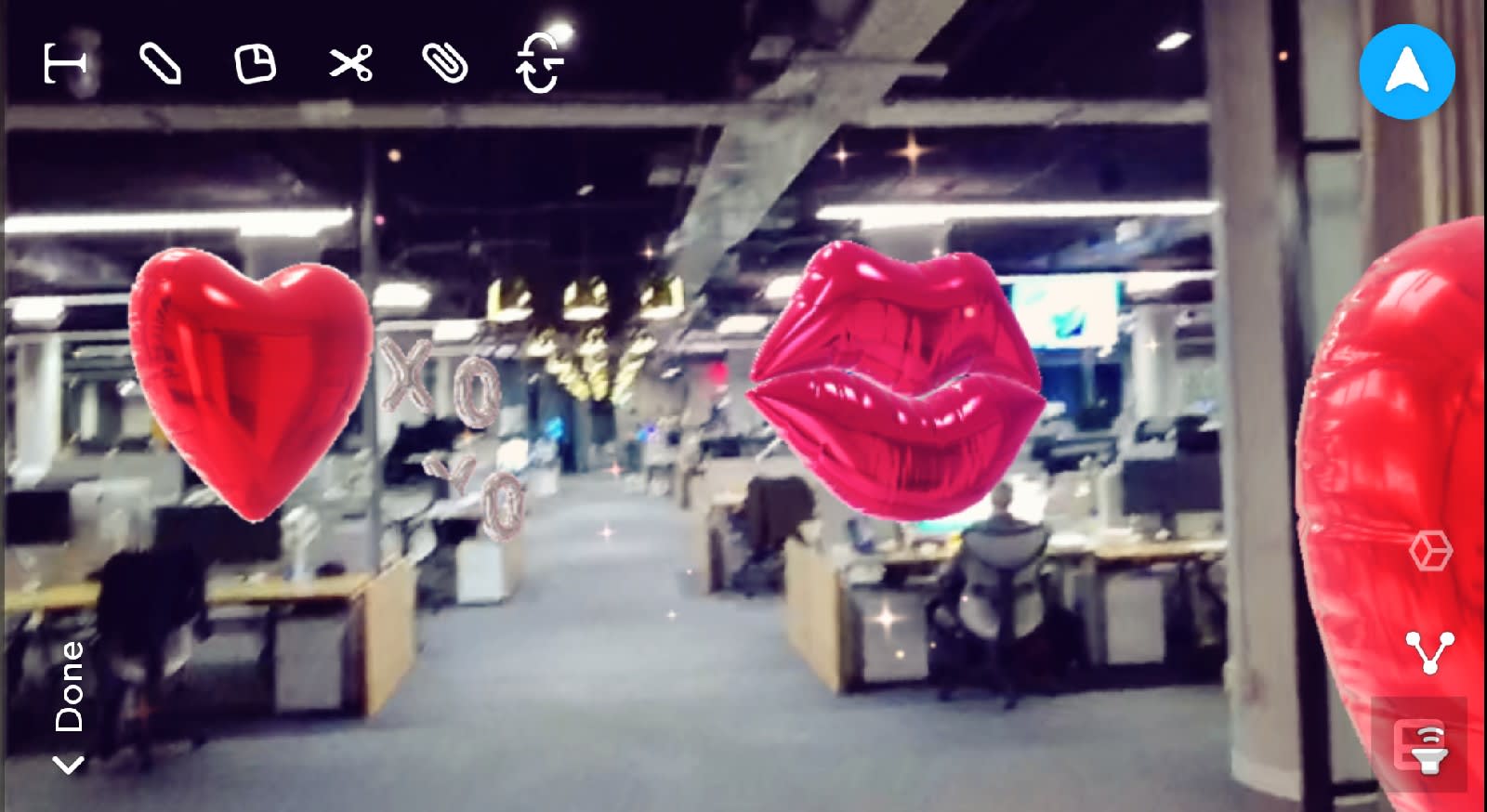 The quality of the footage itself is good, too. The two HD cameras here captured clear, colorful videos, and a tree-lined street's fall foliage looked vibrant. In low light, however, the Spectacles 3 delivered noisy, somewhat blurry footage. Though, nobody should be wearing sunglasses indoors and at night.

That's one of the few limits of Spectacles 3 — since they're shades, you're meant to use them outdoors and in daylight. You can swap in prescription lenses, sure, but low light performance isn't great here, so don't get too excited about using them in a bar, at a fireworks show or at a concert.

You might also want to avoid taking them to the beach or by the pool. Unlike the Spectacles 2, which were IPx7 water-resistant, the new shades aren't rated at all. I definitely was worried when I got caught in the rain.They didn't seem to get damaged though, and should hold up under a light splash.

As impressed as I am by what the second camera adds to the experience, there are some other problems. For one, you'll still have to use the Snapchat app to download your media from the glasses, and apply the effects you want. You'll also have to save the clips to your phone before you can apply the 3D effects, which can take up a ton of space. Since these Snaps now contain twice the information they did before, they're a lot bigger and can take longer to transfer. Thankfully, they'll send over WiFi when available, instead of over Bluetooth. 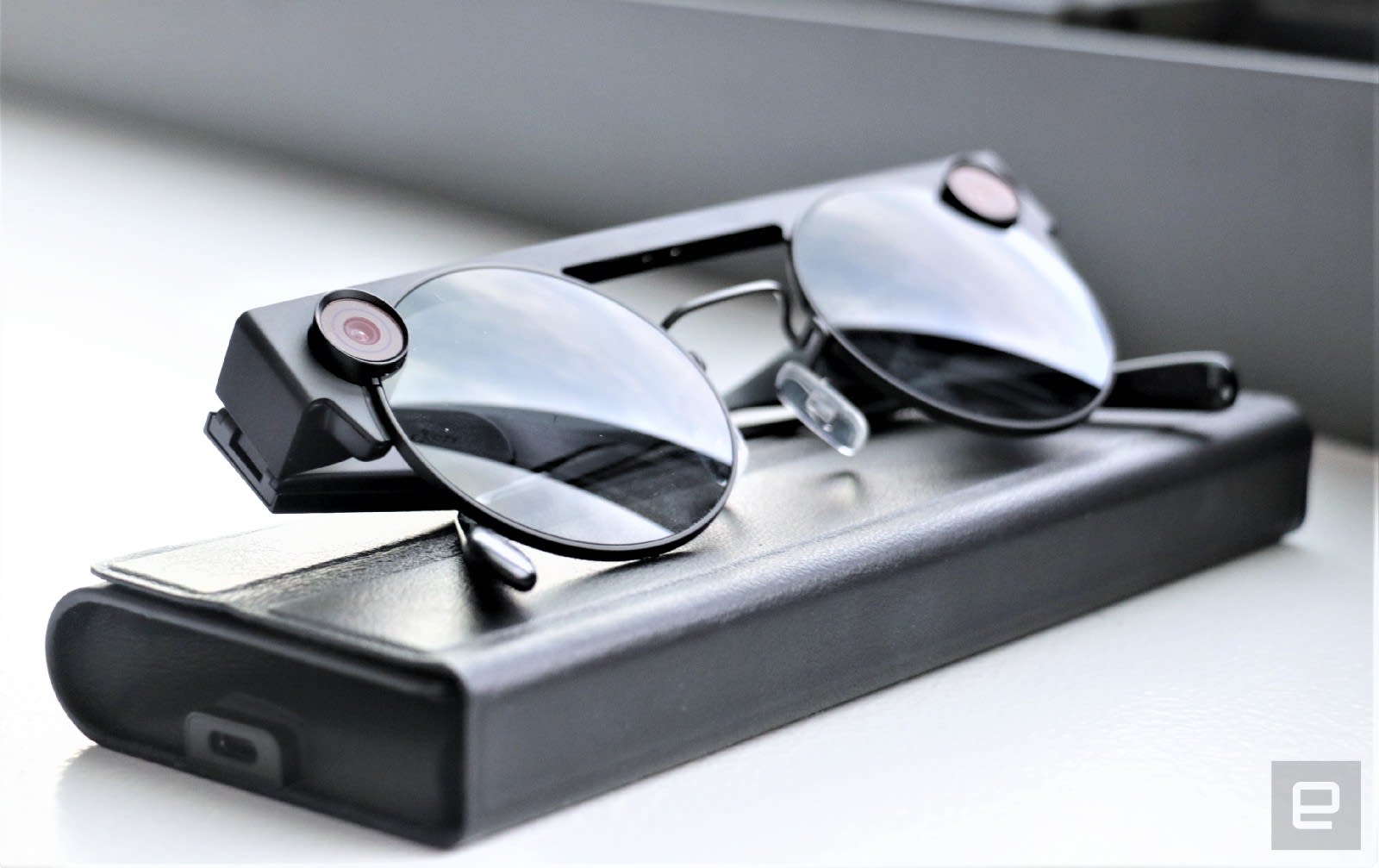 The good news is Snap improved a couple parts of the experience that used to bug me about older Spectacles. They actually stayed connected to my Pixel 3 after I paired them, instead of dropping out each time I put the glasses in their charging case like the Spectacles 2. Upgrading to Bluetooth 5.0 may have helped.

Also, you can now export your media in a variety of formats and aspect ratios to share them to your preferred platform without an awkward circular frame. Though, if you want to see your 3D filters in full effect, you'll need to export them as a VR video that you'll only be able to post to YouTube. Otherwise, the bursting hearts and floating flowers can look wonky. One video I exported in 16:9 had squat, squashed-looking hearts.

Snap also includes a Google Cardboard-based VR viewer in the box that will let you view your footage in 360 degrees. It's the most immersive way to watch your content and relive moments you've captured, but not something you're likely to do while out with your friends or commuting to work.

Another improvement the company made is with the Spectacles' charging case. Previous iterations used a bright yellow triangular case that was bulky and hard to carry around. It also used a proprietary charger. The Spectacles 3, meanwhile, has a collapsible case that flattens when you remove the shades, and recharges via USB-C. This meant battery life was much less of an issue, since I just kept the case with me all the time and was juicing up the glasses any time I wasn't using them. If you don't have the charger with you, though, the Specs 3 will offer enough power to shoot and transfer about 70 Snaps. 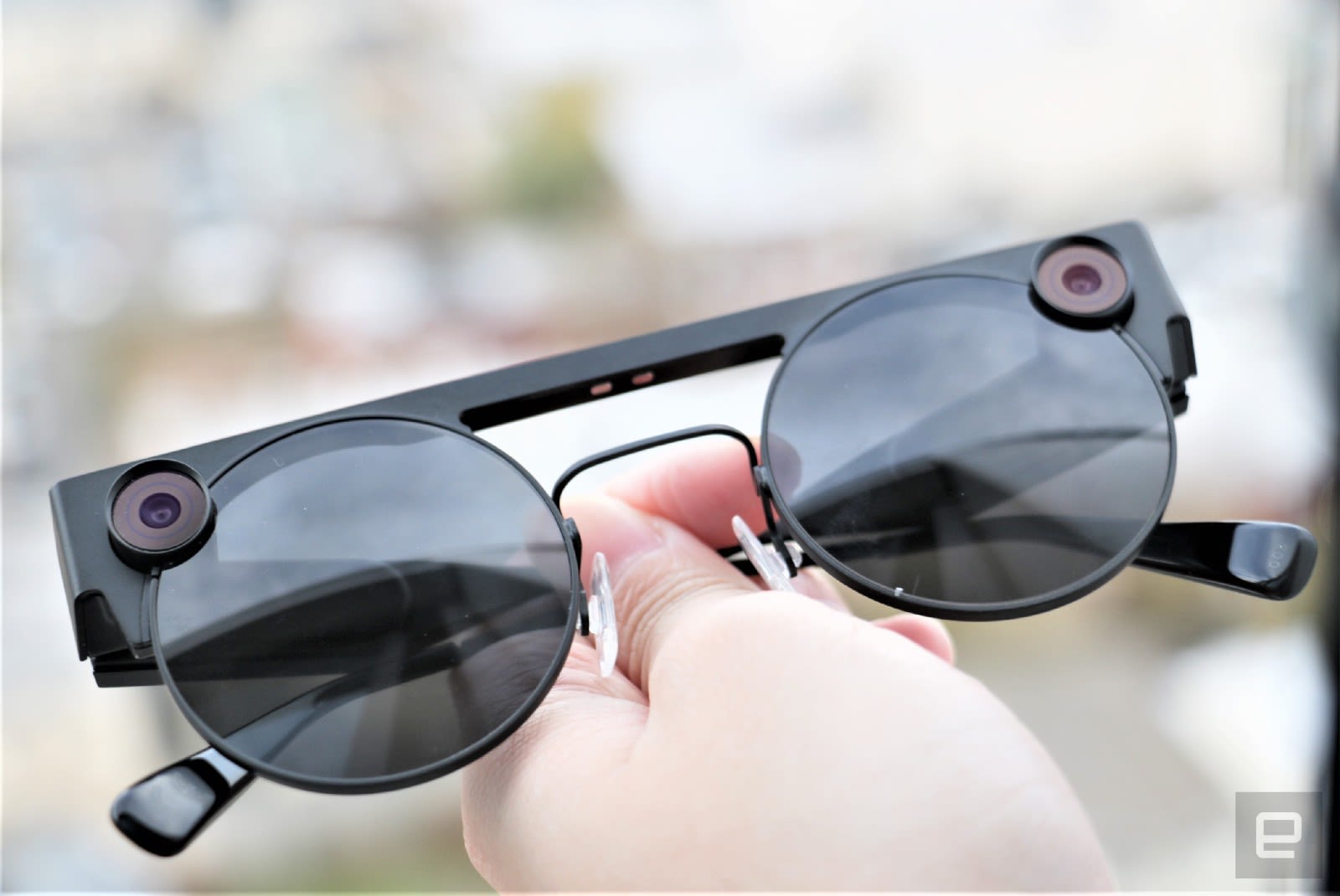 Spectacles 3 will be available today for (brace yourself) $380. Yep that's more than twice the price of the originals. And the company is only making a very limited quantity, so they might be harder than ever to get. You can buy them at Snap's website or Neiman Marcus stores, rather than look out for the elusive yellow vending machine. Technologically, the Specs 3 is an impressive demonstration of what Snap can do. But you'd need to be really into Snapchat and AR filters for this to be worth your time and money.

All products recommended by Engadget are selected by our editorial team, independent of our parent company. Some of our stories include affiliate links. If you buy something through one of these links, we may earn an affiliate commission. All prices are correct at the time of publishing.
View All Comments
Snap Spectacles 3 review: A better, more sophisticated novelty