Yes, the keyboard is new, too.

The rumors are true: Apple has made a 16-inch MacBook Pro. To answer some of your likeliest questions: Yes, it's fast; no, it's not as big or as heavy as you think; no, there's still no SD card reader and yes, there's a new keyboard (hooray!). And, yes, I like it. Quite a lot.

Unlike other Apple devices, which are announced one day and released sometime later (maybe half a year later), the 16-inch MBP is available to order from today. As you might have guessed, it replaces the similarly sized 15-inch MacBook Pro. Accordingly, it also has the same starting price: $2,399 for the entry-level configuration and $2,799 for the step-up model.

As it happens, I've been testing one for the past 24 hours or so. That's not long enough for me to have written a credible review, in my humble opinion, but I do feel ready to share some early impressions alongside other necessarily details, like specs, upgrade options and Apple's lofty performance claims. Read on, and stay tuned for a proper review sometime soon.

To the sort of person who reads Engadget, the 16-inch MacBook Pro looks clearly different from the one it replaces. The physical Escape key is back (hooray again!), which means the Touch Bar is shorter than it would be otherwise. And the keyboard doesn't look as flat as it used to and indeed, it's not! The screen is larger, of course, while the bezels along the top and sides of the display are much slimmer -- Apple says they've been trimmed 25 and 34 percent, respectively.

Still, this doesn't look like a larger-screened machine. If you compare the spec sheets for the 16-inch and soon-to-be-discontinued 15-inch models, the new one is only marginally taller, longer, thicker. The thickness in particular has grown from 0.61 inch to just 0.64 inch. The difference in weight might be more noticeable: 4.3 pounds, up from a flat 4.0. But it still feels thin and light for what it is: A 16-inch laptop designed for some pretty demanding workloads.

The overall design is the same as before, too, complete with the same port selection: four Thunderbolt 3 (USB-C) sockets and a headphone jack. You'll also still find the Touch ID fingerprint sensor in the upper-right corner of the deck. It's as accurate and easy to use as ever. Unfortunately, I'm very sorry to say that there is still no SD card reader, a puzzling miss considering the sort of users this machine was built for.

To restate the obvious, the screen here is big: a 16-inch panel with 3,072 x 1,920 resolution, 500 nits of brightness and a pixel density of 226 ppi. Other than the size and pixel-per-inch rating, this is the same Retina display we've tested on previous MacBook Pros. That is to say, it supports the P3 color gamut (an important spec for photographers and videographers), and it makes use of Apple's True Tone technology, which automatically adjusts the color temperature depending on the ambient light. Ironically, though this machine is billed as the 16-inch MacBook Pro, as if that were the defining feature, the new and slightly larger screen is actually the least interesting thing about it. 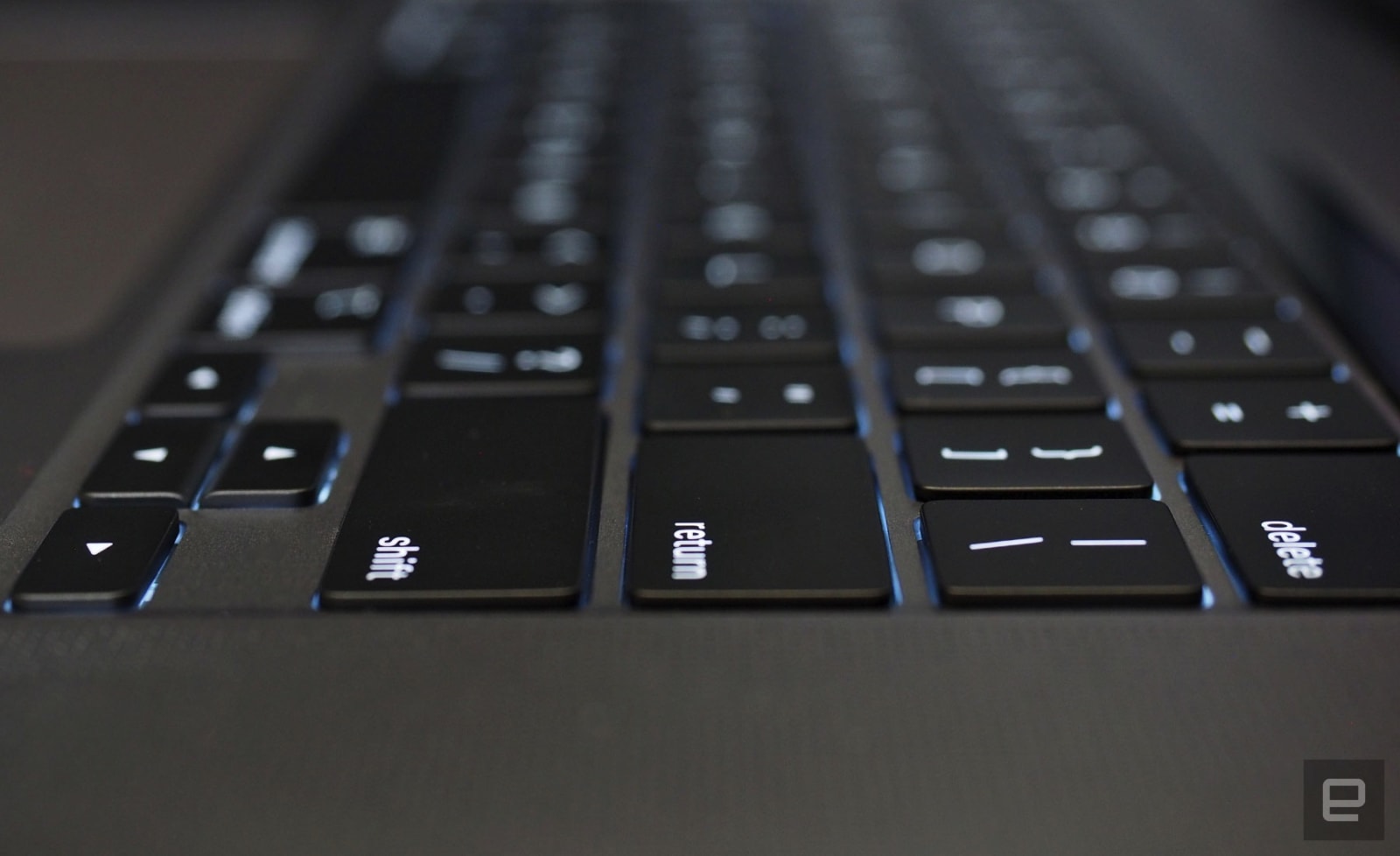 Far more interesting is the keyboard, which has been completely redesigned, and is hopefully a sign of things to come on the 13-inch MacBook Pro and maybe even the MacBook Air. Though Apple's official line on the subject is still that most of its customers enjoy the flat Butterfly keyboard, the outcry among consumers has been so loud that the company has had no choice recently to admit that at least some of its users actually really don't like it.

So the company's research and development team got to work. An Apple spokesperson says the company looked to the desktop Magic Keyboard for inspiration, then endeavored to adapt it to a laptop form factor. Indeed, this new keyboard is also called Magic Keyboard. (Because that's not confusing at all!)

For starters, this new design means the much-maligned butterfly mechanism is gone. We're back to the scissor design used on the Magic Keyboard, the older MacBook Air and other legacy machines. As a result, the buttons here are noticeably cushier, with a full millimeter of travel. At the same time, Apple combined a rubber dome and a new keycap structure that locks in the key at the top of the stroke. The idea there was to preserve the stability of the existing butterfly keyboards while maintaining the depth of scissor-style board.

That's not just me regurgitating Apple's marketing claims, either: It really is a nice keyboard. I've made few typos in my typing so far. No stuck keys. I also had the opportunity to do some side-by-side testing with an older, pre-butterfly 15-inch MacBook Pro, and the earlier scissor keyboard is clearly more wobbly. No surprise: I made more typing mistakes there, too. Here at the office, I asked my colleague, the prolific laptop reviewer Devindra Hardawar, to give the keyboard a shot, and he agreed it's much better.

As a plus, for those who care about such things, Apple also tweaked the arrow keys into what it calls an "inverted-T," so the left and right arrow keys are shorter and smaller than the vertical ones, making them easier to find by feel. 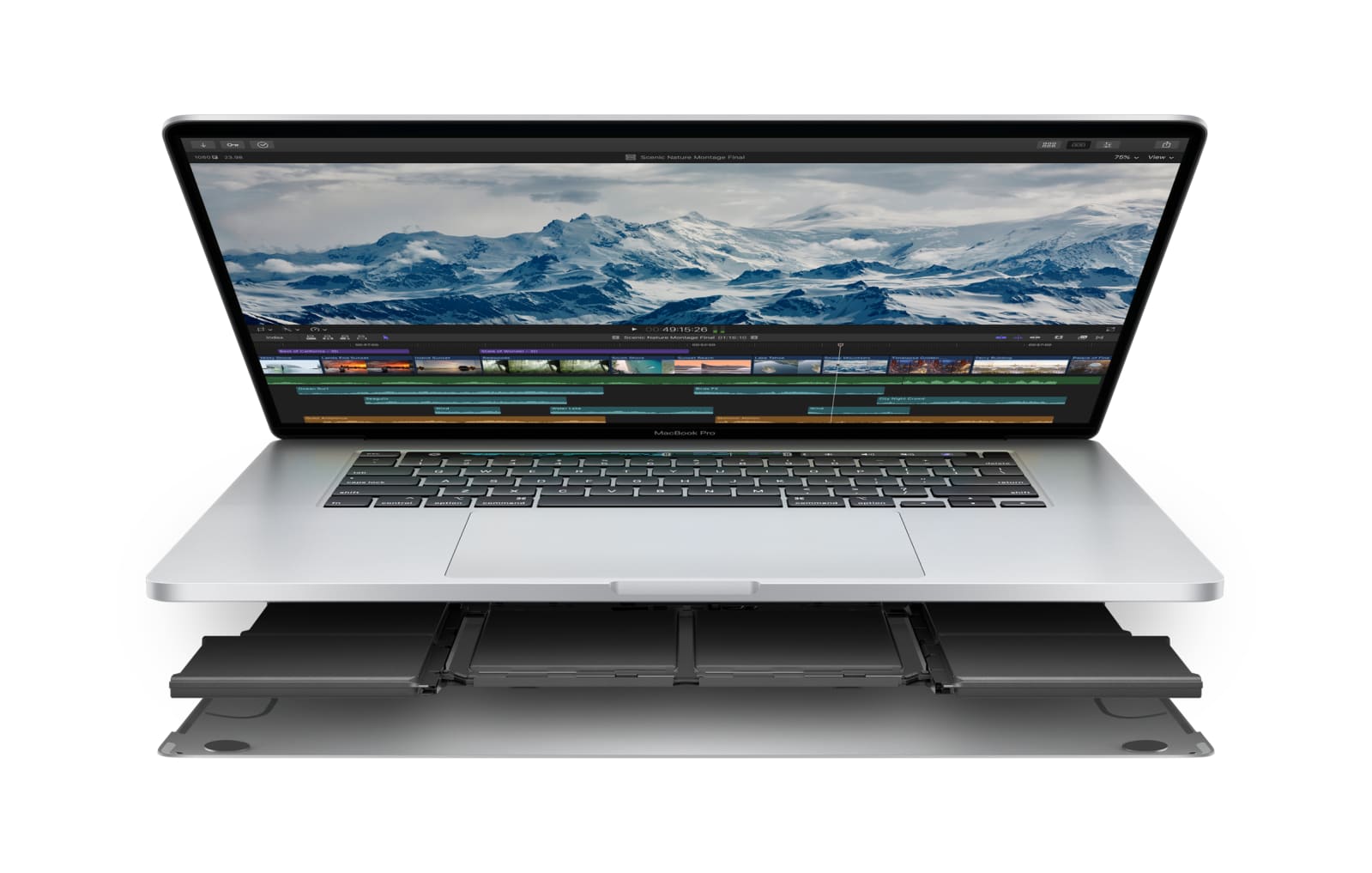 You can't tell by looking at the machine, but the audio capabilities are also much improved. There's now a three-mic array on the left side, which Apple promises can match or even best a studio-quality mic, such as the Blue Yeti. In a series of demos for reporters ahead of today's launch, Apple played back recordings made with the Yeti, the MacBook Pro and competing machines from Dell and Razer. The MacBook Pro indeed had the least hissing in the background, but I'd much rather attempt my own recordings and let you know how it goes.

As for output, there's a six-speaker setup, with force-canceling woofers meant to cut down on distortion caused by vibration. In that same series of demos, Queen's "Another One Bites the Dust" sounded louder and bassier than on other machines. Apple was the clear winner in other musical genres, too. I of course intend to do more testing before putting out a full review, but for now, it's safe to say that the audio quality here is quite good.

And now, performance. The MacBook Pro is offered with six- and eight-core Intel Core processors and either an AMD Radeon Pro 5300M 4GB or a 5500M 4GB GPU (upgradable to 8GB), depending on which configuration you buy. If money is no object, you can pack up to 64GB of DDR4 RAM (the standard is 16GB). On the storage front, you can configure it with up to an 8TB SSD, which is just bonkers.

At this point, you may be wondering about heat and battery drain. Fair questions, both! The machine packs a 100-Wh battery (up from 84-Wh), which is the maximum size allowed on planes by the Federal Aviation Administration. Thanks in part to that new battery, the company rates the machine for 11 hours, up from 10 hours on the most recent 15-inch model. To match, the accompanying adapter now delivers 96 watts of power, up from 87 watts in the previous generation. (The charger itself is the same size.)

Meanwhile, Apple also designed the MacBook Pro with larger impellers, more blades and new fans that are said to improve airflow by 28 percent. The heat sink has 35 percent more surface area, which Apple says will allow it to dissipate heat more efficiently. All told, the company claims the machine can sustain up to 12 more watts of power during "intensive workloads," though that seems subjective on its face.

Both configurations are upgradeable to a 2.4GHz eight-core Core i9 processor, the 64GB of RAM I mentioned earlier, a Radeon Pro 5500M 8GB GPU and either 2TB, 4TB or 8TB of storage. They're available to order today and are expected to ship by the end of the week.