More than 40 people received the notification.

Two months after expanding across California, the state's Earthquake Early Warning system sent out its first real alert, notifying residents of shaking in Monterey and San Luis Obispo counties, along the San Andreas fault. While the quake eventually registered at 4.3 on the Modified Mercali scale, the USGS data shows it was initially estimated at 4.8, high enough to warrant an alert.

According to a project manager quoted by the LA Times, about 40 people received the alert, and it took 8.7 seconds for the alert to go out. In this case, that reached people in the town of Paso Robles, about 22 miles away in enough time to give them about one second of warning. However, that far away the intensity dropped to two on the scale, hardly enough to jostle anyone or cause noticeable damage. If you're near a powerful enough quake, the warnings can come to you via the Wireless Emergency Alert system, or pushed via the MyShake app on iOS and Android. 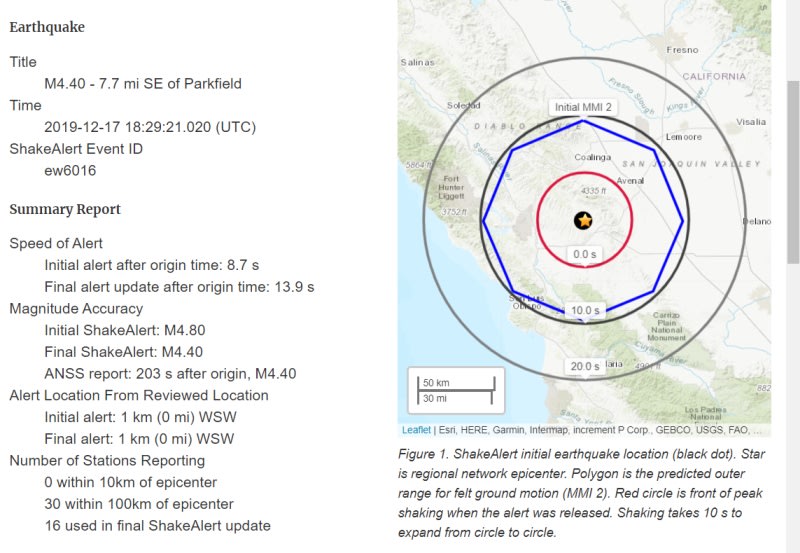 Please note that while we only send out the early warning alerts for M4.5 and above earthquakes, the initial ShakeAlert estimate for this event was M4.8, so that is why the alert went out for the (now) M4.4 earthquake.

All products recommended by Engadget are selected by our editorial team, independent of our parent company. Some of our stories include affiliate links. If you buy something through one of these links, we may earn an affiliate commission. All prices are correct at the time of publishing.
California's statewide Earthquake Early Warning system sent its first alert
california
earthquake
gear
mobile
myshake
services
ShakeAlertLA
usgs