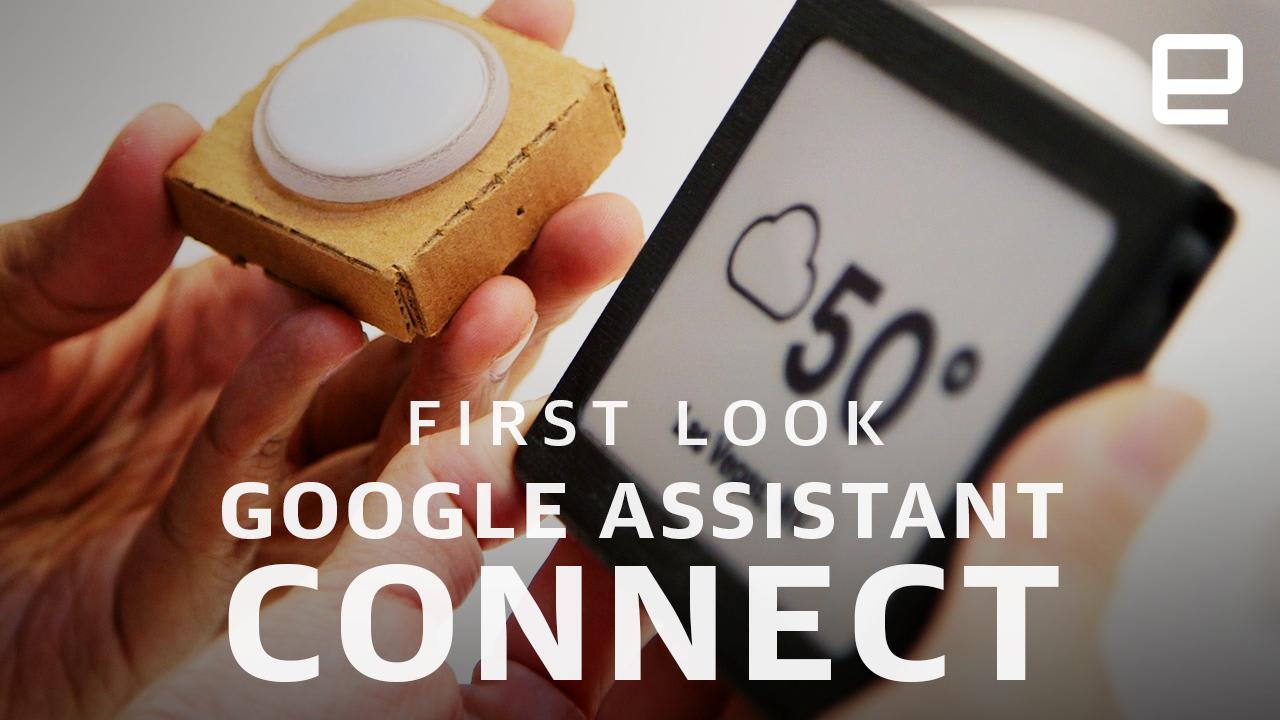 It's hard to imagine but Assistant is just two and a half years old (officially anyway), and it's finding its own identity. Assistant is on track to be on a billion devices by the end of January, and is in 80 countries and almost 30 languages. But Google isn't done trying to squeeze Assistant into everything imaginable, and is launching a new program to make it cheaper and easier for companies to integrate the digital helper. It's introducing a preview of the Google Assistant Connect platform today at CES 2019, which uses existing smart home platforms to expand to new device types.

To show companies what can be done with the Connect platform, Google showed off two rudimentary devices at the show -- a smart button and a palm-sized e-ink screen. You can set up the button to perform your favorite Assistant routine whenever you press it, and it will communicate with your smart speaker or display to carry out that task. You could stick one in your garage, for instance, and have it close your door, turn on your lights and start your music at a push.

The e-ink device does a bit more -- you can configure it to display your upcoming calendar events, the weather forecast or your commute details. It also has a button onboard to run your favorite action or routine, like the standalone button. To be clear, these are extremely basic proof-of-concept devices -- and they certainly felt very unfinished. The button is housed in a cardboard body, while the e-ink screen was literally rough around the edges. They didn't even seem to be working at all during our demo, though the button did glow red when I pressed it. But Google isn't planning on actually selling these things itself -- they're meant to show other manufacturers what's within the realm of possibility.

These things also don't have their own processors, and aren't meant to. Assistant Connect devices are intended to be simple to set up and inexpensive to make, so components like chips aren't part of the program. Instead, they communicate with your smart speaker, display or even perhaps your phone over Bluetooth, and the processing happens on those linked gadgets instead.

It might be easy to dismiss these flimsy prototypes as unnecessary, but I can see the appeal, especially of the smart button. There are routines I perform extremely frequently, like turning everything in my apartment off at once. Having a button by my door to do that at a press is much more convenient than asking Assistant, waiting for it to listen, then saying my command.

More details on Assistant Connect will be shared at Google I/O, and right now it's a bit too early to tell if the platform has a shot at success. From what we can see so far though, one thing is clear: Google is going to squeeze Assistant into everything it can, so there's no room for Alexa or Siri to creep in.

We'll have more to share about Assistant Connect and how device makers can gain access to the technology later this year.

In this article: CES2019, gadgetry, gadgets, gear, google, googleassistant, googleconnect
All products recommended by Engadget are selected by our editorial team, independent of our parent company. Some of our stories include affiliate links. If you buy something through one of these links, we may earn an affiliate commission.