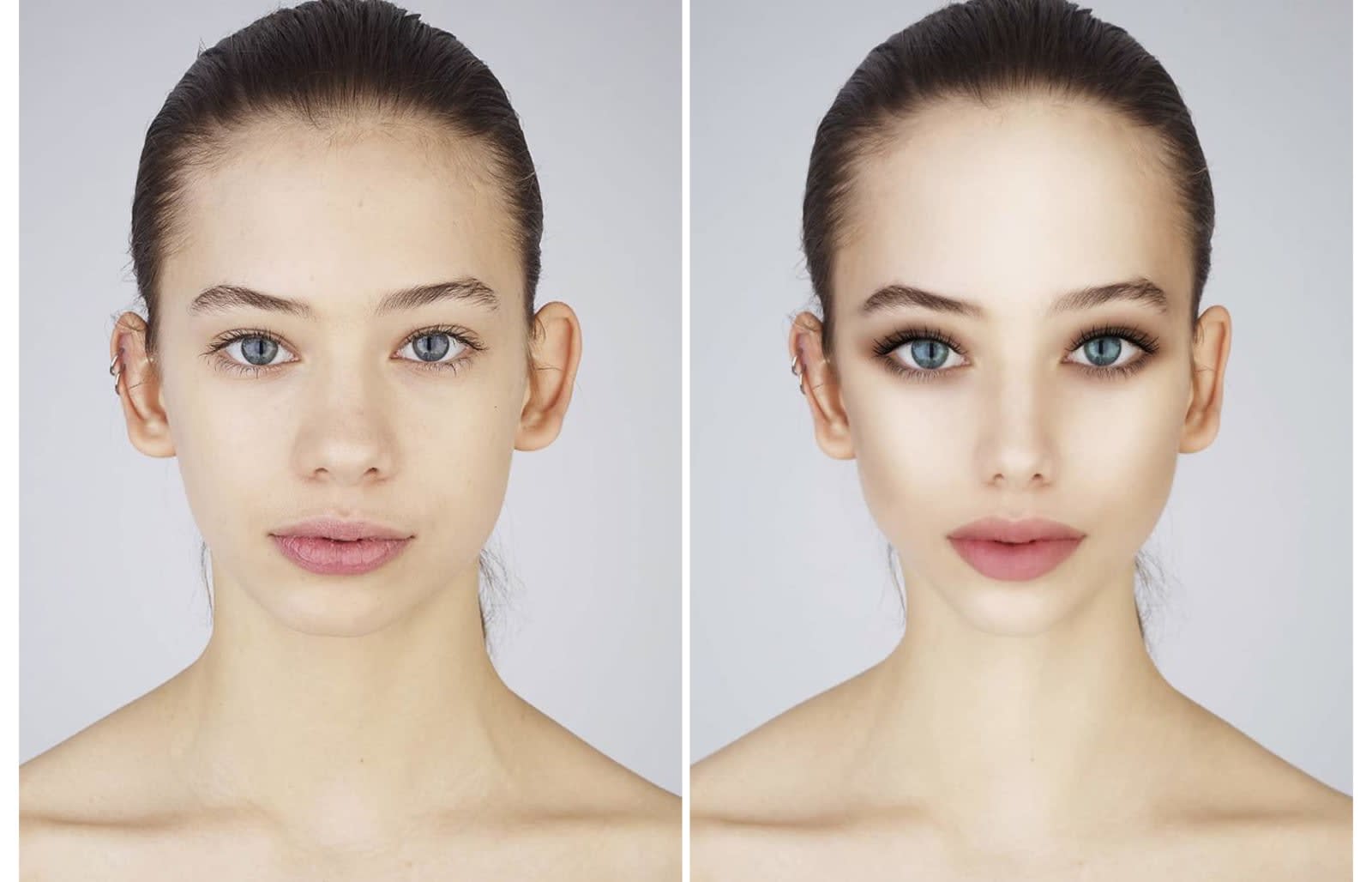 With a new project called Selfie Harm, photographer John Rankin Waddell, better known as Rankin, wanted to see the role social media played on self image in young people. He took photos of a group of teens aged 13 to 19, then asked them to spend a few minutes editing the shots using one of the many selfie apps marketed at teens. The result? "People are mimicking their idols, making their eyes bigger, their nose smaller and their skin brighter, and all for social media likes," he said on Instagram.

The project was created with agency M&C Saatchi and MTArt as part of Visual Diet, which examines how images can affect mental health. Each series shows the original, unretouched faces, right next to the polished and often dramatically changed versions.

The phenomenon has been dubbed as Snapchat dysmorphia, described by experts as a type of virtual body dysmorphic disorder (BDD). Apps like Facetune, SelfieCity, RetouchMe and others can be used to do anything from mild retouching to complete digital cosmetic surgery. To avoid any bias, Rankin found teenagers that weren't actually using the apps, then taught them how.

"What you can do on these apps is way beyond what even a great photoshop operator can do," he told Bored Panda. "They're addictive, very impressive and you can have a lot of fun warping, changing and reimagining your appearance. But it's when people are making an alternative or 'better' social media identity that this becomes a mental health problem."

For my latest series, Selfie Harm 🤳 I photographed teenagers & handed them the image to then edit & filter until they felt the image was 'social media ready'. People are mimicking their idols, making their eyes bigger, their nose smaller and their skin brighter, and all for social media likes. It's just another reason why we are living in a world of FOMO, sadness, increased anxiety, and Snapchat dysmorphia. It's time to acknowledge the damaging effects that social media has on people's self-image. Thanks to: the incredible individuals that took part in the @Visual.Diet project; Jennifer, Felix, Alessandra, Maisie, Isaac, Seb, Beneditcte, Shereen, Mahalia, Eve, Siena, Tomas, Emma & Georgia. Also, @mimigray_ at @mcsaatchilondon, @marinetanguyart, @gemfletcher, @technicallyron & @justintindall on making this project come to life 🙌 PLEASE NOTE 📝 The majority of subjects preferred their original image.

Rankin believes these ideas come not only from social media, but also the ad industry, which presents models as hyper-idealized. Nations like France have even introduced laws forcing the industry to label photoshopped or airbrushed images. The aim is to fight mental health issues and eating disorders, which are the second most common cause of death for 15 to 24 year olds.

Visual Diet wants to show not just the negative consequences of narcissistic social media images, but how meaningful visual content can have a positive impact. It features inspiring work from five artists and a digital poster and website that filters out unhealthy content over time. MTArt's Marine Tanguy said it found people's well-being increased significantly when they were surrounded by meaningful, rather than unhealthy visual content.

Tanguy noted that Kim Kardashian has around 50 times more Instagram followers than the Louvre museum. "It's time to stop consuming daily the visual content of [social media influencers] and move over to a more inspiring visual diet," she said. As Rankin notes, however, it's not all bad on Instagram. "Please note: The majority of subjects preferred their original image," he said.

In this article: art, cameras, depression, gear, Rankin, Retouching, self-image, selfieharm, TheBigPicture, thenewbigpicture
All products recommended by Engadget are selected by our editorial team, independent of our parent company. Some of our stories include affiliate links. If you buy something through one of these links, we may earn an affiliate commission.