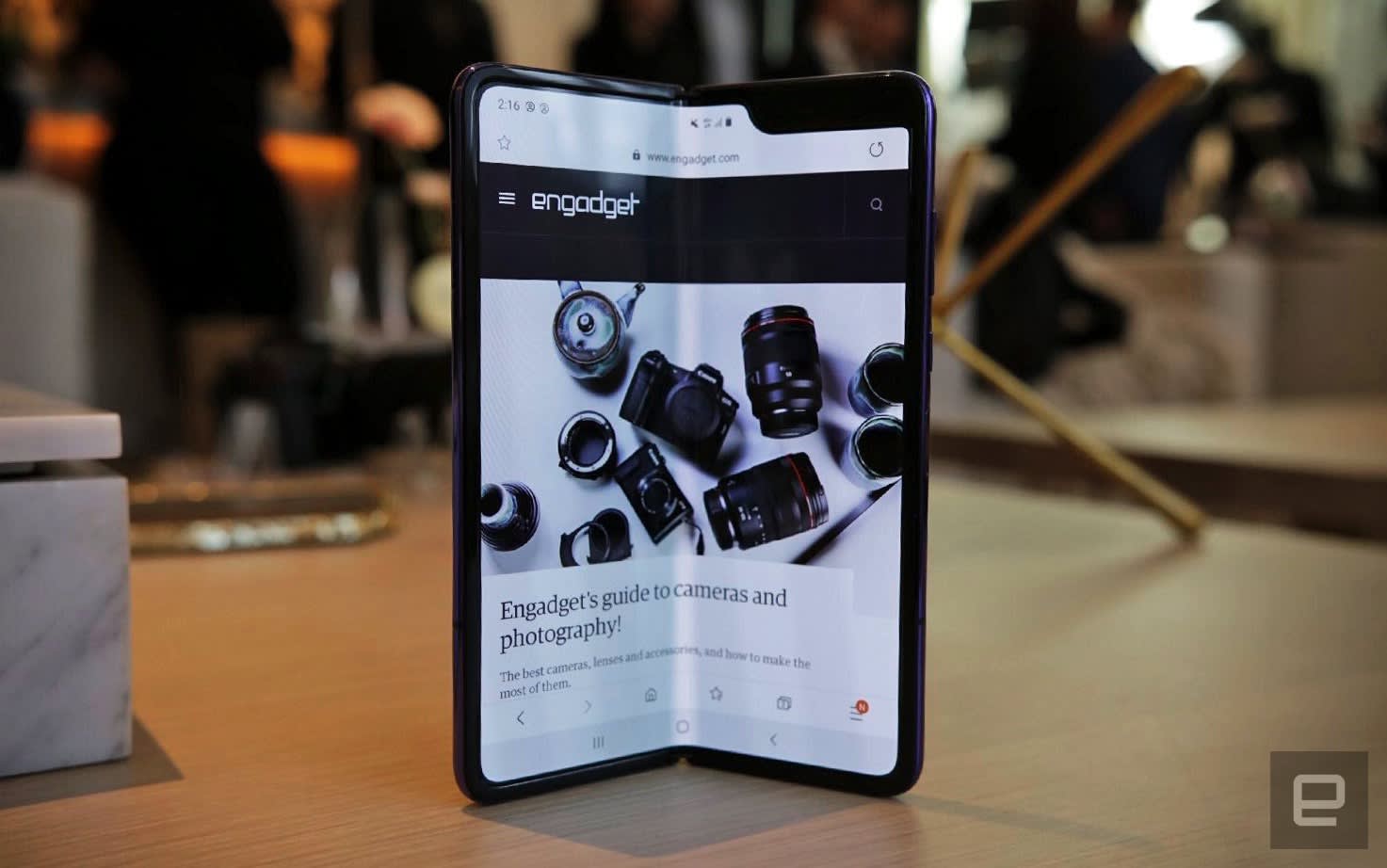 Early Samsung Galaxy Fold adopters might be in for a surprise, judging by some journalists who reported some serious issues with their review units. The Verge's Dieter Bohn claimed a bulge that appeared in the crease of the display broke the screen after just a day of use and CNBC's Steve Kovach tweeted that the display on his review unit has started flickering.

Update: Samsung has responded, and said it will investigate reports of broken units.

After one day of use... pic.twitter.com/VjDlJI45C9

Meanwhile, Bloomberg's Mark Gurman said his display is busted, though he noted he took off a "protective layer/film" Samsung says shouldn't be removed. YouTuber Marques Brownlee (MKBHD) encountered a similar issue after he removed the film, thinking it was a screen protector. So, you probably shouldn't take that layer off if you're buying a Galaxy Fold -- there's a warning on the wrap that urges you to leave the film in place.

The phone comes with this protective layer/film. Samsung says you are not supposed to remove it. I removed it, not knowing you're not supposed to (consumers won't know either). It appeared removable in the left corner, so I took it off. I believe this contributed to the problem. pic.twitter.com/fU646D2zpY

I got this far peeling it off before the display spazzed and blacked out. Started over with a replacement. pic.twitter.com/ZhEG2Bqulr

Dear future #GalaxyFold owners, I know I always say "No one ever read the instructions"... PLEASE READ THIS ONE!!!

(This is the wrap over the screen of the Galaxy Fold) pic.twitter.com/LuQPRfDZIE

We've asked Samsung for comment on these issues, though it's unclear how widespread they are. While a folding screen will inevitably add all manner of new complications, Samsung can hardly afford another major hardware disaster following the Note 7 debacle, in which it had to recall and discontinue the handset after numerous battery explosions. Though Samsung has yet to fully lay out its Galaxy Fold after-sale plans, rumor has it the company will offer screen replacements for free.

Meanwhile, at a hair under $2,000, the Galaxy Fold carries a hefty price tag, but that hasn't deterred folks who snapped up the device in pre-orders before even getting a chance to try it in store. So much so that Samsung has already sold out of its initial run, albeit before the reports of broken screens started to emerge.

The device is out of stock on Samsung's website, and the company told people who reserved one of the foldable phones (but didn't commit to the pre-order) they can't buy the Galaxy Fold "due to overwhelming demand." They've been placed on a waitlist.

Meanwhile, the shipping date for current orders from AT&T is early June, a far cry from the Fold's April 26th release date. T-Mobile will only sell it in store for now. It's unlikely Samsung made a ton of the handsets in the first run, so we perhaps shouldn't read too much into it selling out of the Fold right now in terms of it generating a high volume of sales. Yet there's clearly a demand for the handset, and perhaps it's more of a status symbol for those who'll be among the first to have a foldable phone in their pocket.

In this article: display, folding phone, folding screen, foldingphone, foldingscreen, galaxy fold, galaxyfold, gear, mobile, safety, samsung
All products recommended by Engadget are selected by our editorial team, independent of our parent company. Some of our stories include affiliate links. If you buy something through one of these links, we may earn an affiliate commission.