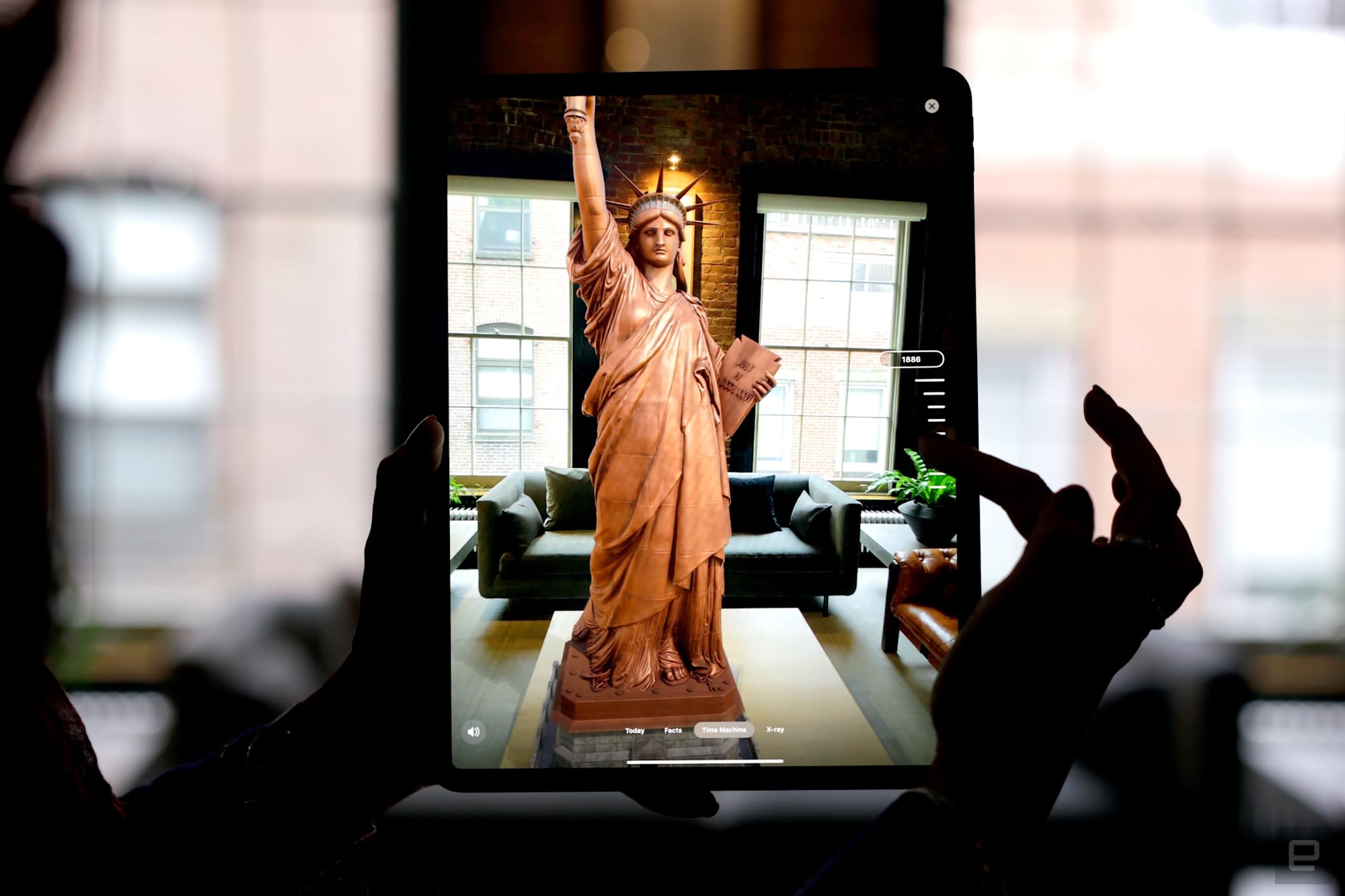 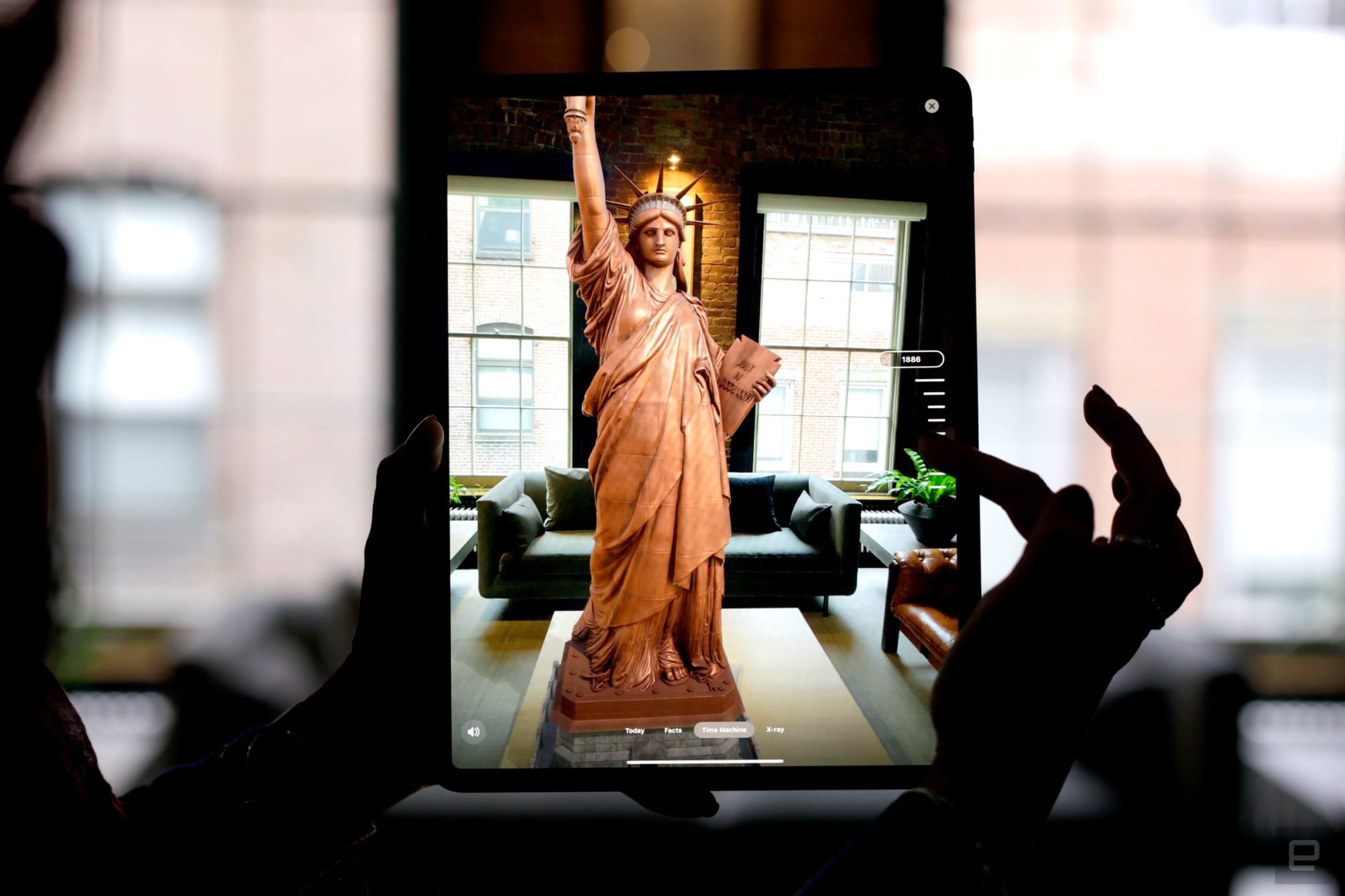 Rather than build the Statue of Liberty in such a way that its 200,000-lb copper shell stood upright on its own, Gustave Eiffel — the man behind the eponymous tower — designed it around a massive inner framework. You might have already known this, but it's the kind of detail that doesn't often spring to mind unless you're 1) a French/American history buff or 2) someone who has already been inside the thing. Thankfully, to coincide with the opening of the official Statue of Liberty museum this week, there's a new AR-focused iOS app to give visitors and the far-flung curious an up-close look at France's majestic gift to the US.

To the Statue of Liberty-Ellis Island Foundation, which spearheaded the development of the app with Yap Studios and Diane von Furstenburg, it was crucially important to make this iconic piece of history more accessible to the masses.

"Not many people know this, but post-9/11, only 18 percent of the 4.5 million visitors that go out to Liberty Island from around the world can go inside the statue," said Foundation VP and Chief Advancement Officer Richard Flood. "Still fewer, about 7 percent, are able to climb up to the statue's crown." While that means some 315,000 people have gotten to visit the statue's highest publicly accessible point, many others will never even get close. Until now, that is.

Once installed, you can essentially plop a high-resolution Statue of Liberty on your coffee table, and once you move in close enough, your view pierces that tarnished copper shell to reveal the inner tower and the iron skeleton keeping it upright. Tilt your screen upward, and your view inside the shell fades away, leaving you looking face-to-face with Lady Liberty herself while the sound of squawking seabirds fill the air around you. For someone who has never actually seen the statue in person -- let alone from such a close vantage point -- the effect is both striking and serene. And to get a sense of just how big the statue is, you can also plant a life-sized replica of its foot onto the ground in front of you. (Spoiler alert: It's, uh, pretty big.)

Other AR experiences baked into the app include a time-lapse mode that shows how the statue's copper patina developed over time, and a view of the statue and the surrounding skyline from its torch. That last view is a particularly valuable one -- the original, publicly accessible torch was damaged by debris after German saboteurs blew up a munitions depot in Jersey City, NJ to hinder US support for its allies during World War I. As a result, the last time that a visitor actually saw the statue, New York and New Jersey from all the way up there was in 1916.

For now, the augmented reality fun ends there -- you can't go to Liberty Island and point your phone at the statue to gain any new insights. That's not to say you'll never be able to, though: the app's developer, Yap Studios, hasn't ruled out adding new, on-island AR experiences down the road.

Regardless, there are a few extra flourishes to take advantage of If you make the trek to Liberty Island with the app in tow. Once you arrive, the app will recognize that you've come to meet the statue in person and offer a map and a guided audio tour. And for the seriously curious, the Statue of Liberty-Ellis Island Foundation has also commissioned a podcast series you can dig into inside the app that delves into the monument's history, symbolism and lasting impact.

It's not uncommon to see augmented reality apps perform a single job -- they're great for helping you measure things, and seeing how that new couch might fit into your living room. After playing with this app for the better part of an hour, it's clear that the best thing it has going for it is its sense of cohesion and thoroughness. Rather than just give us a virtual model, the people involved wove together richly detailed images and spoken word in an attempt to tell as complete a story as possible, no matter how far from the statue we might be.

It's hard to imagine any one piece of software managing to tell this monument's story in full, and this app simply can't explain everything. Still, the effort was worth it. After all, a landmark as significant as the Statue of Liberty, which has come to mean so many things to so many people, deserves to have its story told in as many ways as possible.

In this article: app, apple, ar, art, augmented reality, av, entertainment, hands-on, software, statue of liberty
All products recommended by Engadget are selected by our editorial team, independent of our parent company. Some of our stories include affiliate links. If you buy something through one of these links, we may earn an affiliate commission.