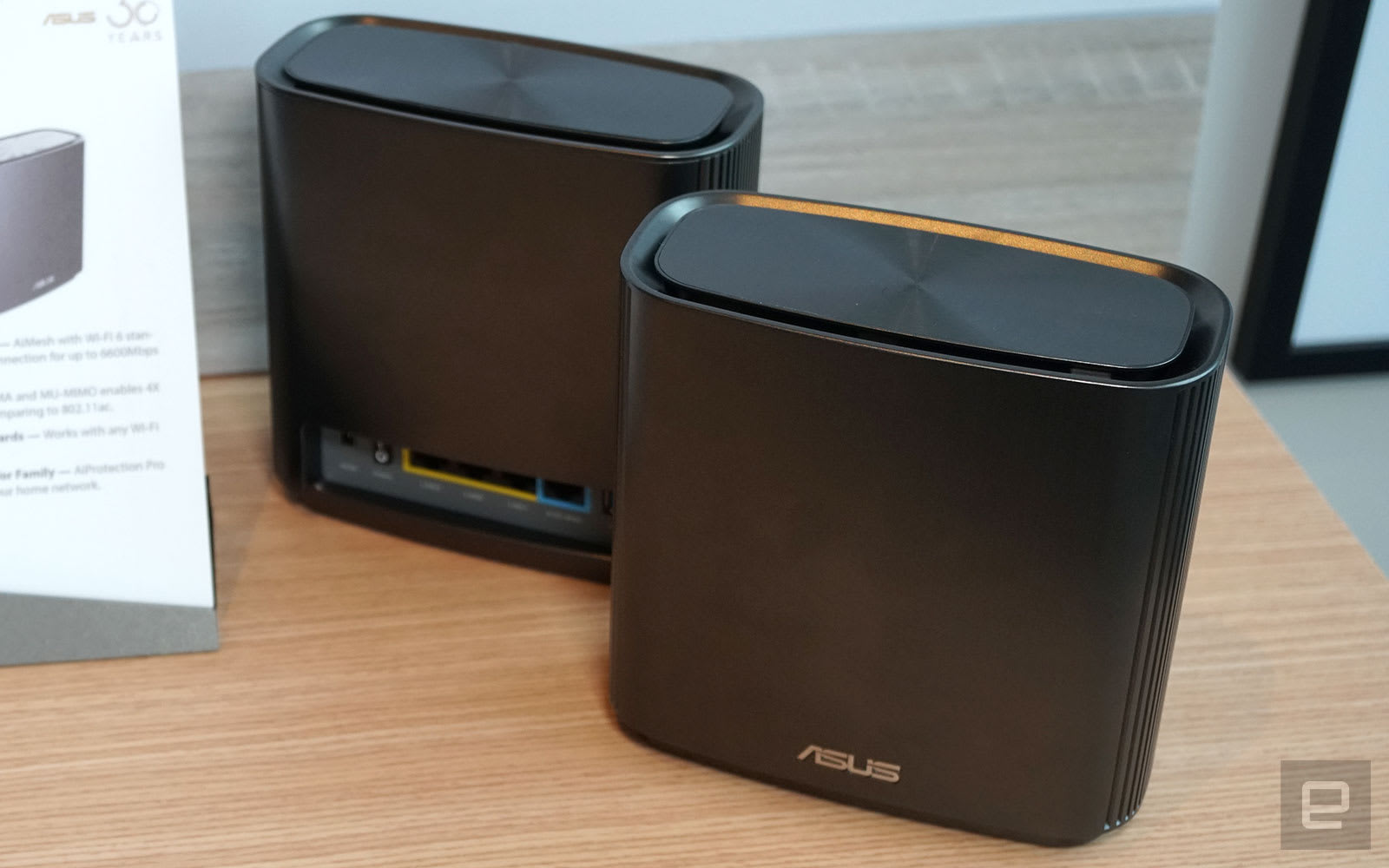 When you look up WiFi 6 routers, you tend to get a bunch of nightmare-inducing designs that resemble gigantic dead spiders. Luckily, brands like Netgear and TP-Link have shown that such products can don a more humble outfit, and ASUS is finally following suit for this year's Computex. The company's freshly announced AiMesh AX6600 kit consists of two RT-AX95Q routers that, to our surprise, look very much like standard networking hubs (remember the Blue Cave?). Most notably, all six antennas are hidden inside each device, with two of them placed diagonally in the middle to boost reception. Spec-wise, these new routers use Broadcom chipsets and support up to tri-band 6,600 Mbps WiFi connectivity. That's significantly faster than the maximum 4,804 Mbps speed on their predecessor, the RT-AX92U in the AiMesh AX6100 kit. Furthermore, the new routers use WiFi 6 for both backhaul (between mesh routers) and front-haul (between routers and client devices) connections, whereas the previous version used WiFi 6 just for backhaul. This translates to faster transfer rates across the board, courtesy of how WiFi 6 more efficiently handles data across with multiple devices.

And, yes, you can add any existing ASUS AiMesh router as a new node to extend your mesh network coverage. Just toggle the pairing function in the official app and you should be good to go. There's also a 2.5G WAN port at the back for those who have a multi-gig connection, along with three LAN ports and a USB port. You'll also get ASUS' AiProtection Pro router security software (powered by Trend Micro), which provides real-time malware detection plus parental controls.

As with many Computex announcements from ASUS, there's no word on how much the AX6600 will cost, but you can expect it to show up in some markets as early as Q3 this year.

In this article: 802.11ax, aimesh, aimesh ax6600, asus, ax6600, computex2019, gear, internet, mesh, mesh networking, MeshNetworking, personal computing, personalcomputing, router, rt-ax95q, wifi, wifi 6, wifi6
All products recommended by Engadget are selected by our editorial team, independent of our parent company. Some of our stories include affiliate links. If you buy something through one of these links, we may earn an affiliate commission.