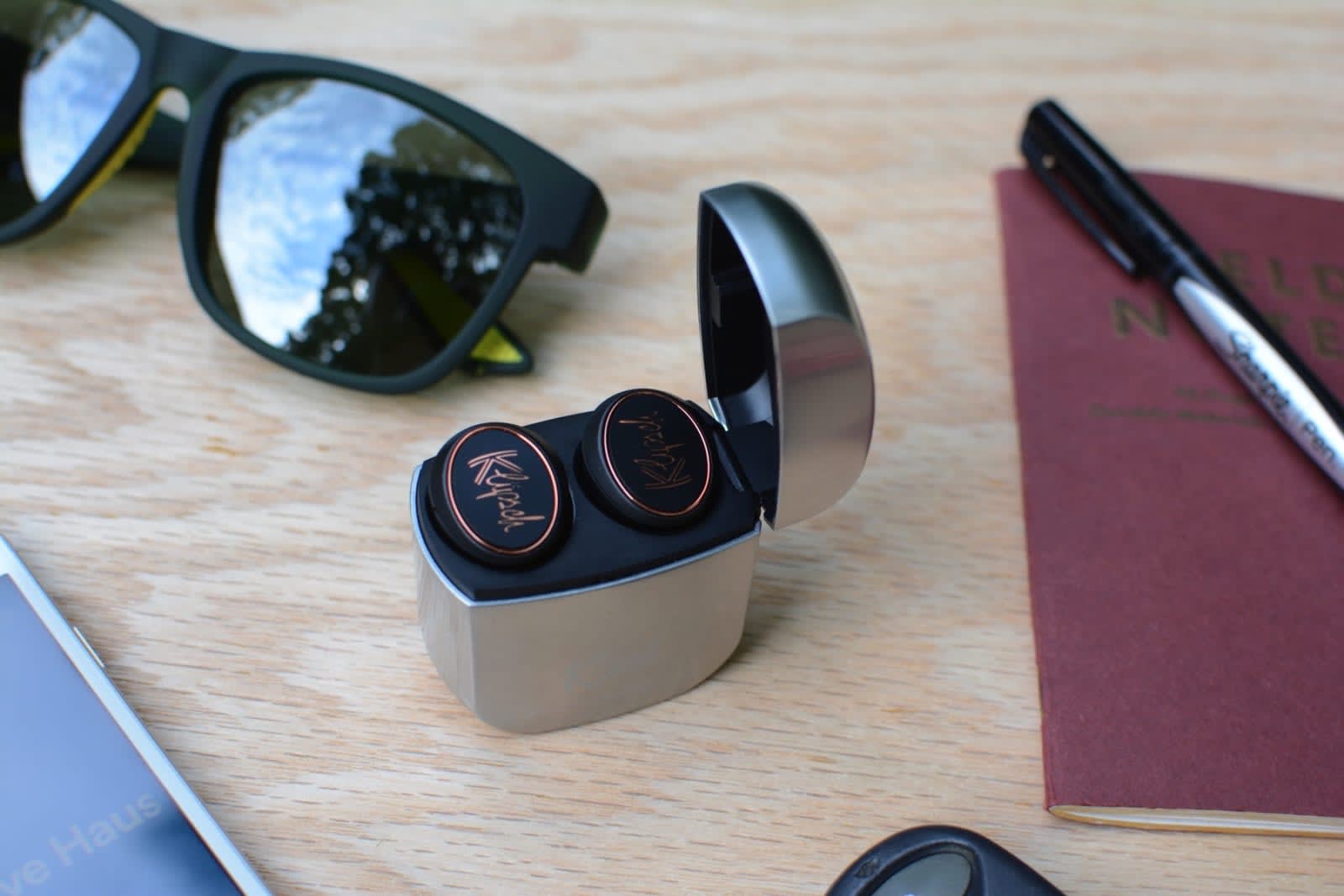 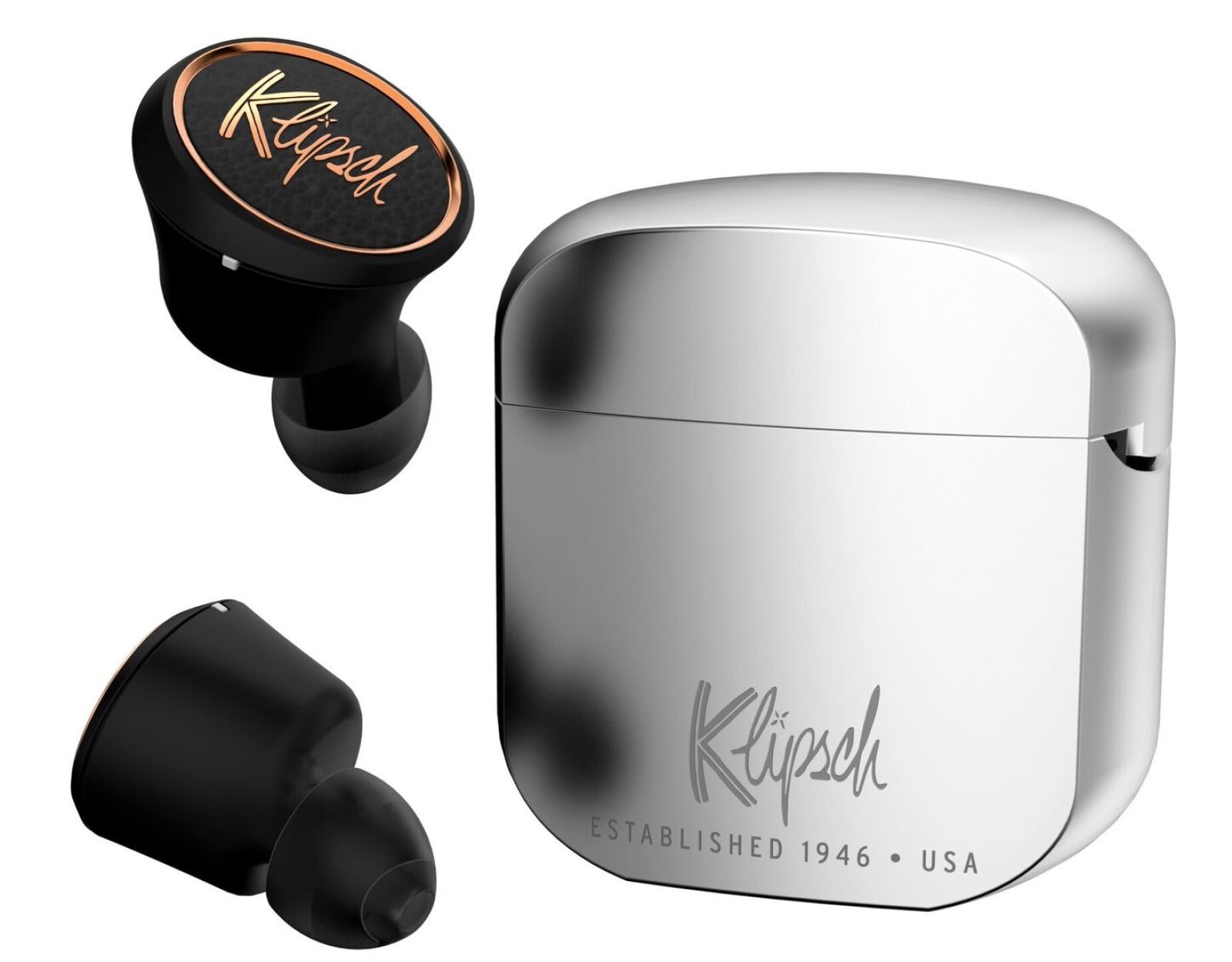 Klipsch has been making high quality audio gear since 1946, mostly catering to the audiophile and HiFi crowd. It makes plenty of speakers, soundbars and headphones for casual listeners too, and back at CES, the company debuted its first true wireless earbuds. At $199, the T5 True Wireless offer most of what you need in a pair of true wireless earbuds -- including a pretty cool Zippo-like charging case. But,they're far from perfect, and a few of their flaws could be deal breakers for you, even if they do cost $100 less than much of the competition.

I expected a lot more from Klipsch’s first true wireless earbuds, given the company’s track record for audio gear. The T5’s unique design makes the set uncomfortable to wear and the sound quality doesn’t match up to the likes of Sony and Sennheiser. Even at a lower price, there are better options than what Klipsch offers here.

Be the first to review the T5 True Wireless?
Your ratings help us make the buyer’s guide better for everyone.
Write a review

Klipsch has a knack for classic design. The company has a rich history, and that comes through in its aesthetic choices that have retro elements without feeling contrived. The script logo on the T5 True Wireless recalls the original Klipschorn word mark -- the first speaker made by Paul W. Klipsch. While you can't go too classic with the look of true wireless earbuds, you can take that approach with the charging case.

The T5 True Wireless charging case has a side-hinge closure that resembles the iconic Zippo lighter. This case is shorter and deeper, sure, but it's clear Klipsch was inspired by that classic pocket mainstay. It's slightly too bulky to keep in your front pocket, but you can open up this earbud case with a flick of the thumb. The downside of the metal material is it will scratch if you're not careful. Lastly, three LEDs give you an estimate on how much battery is left and there's a USB-C jack around back when you need to plug in. 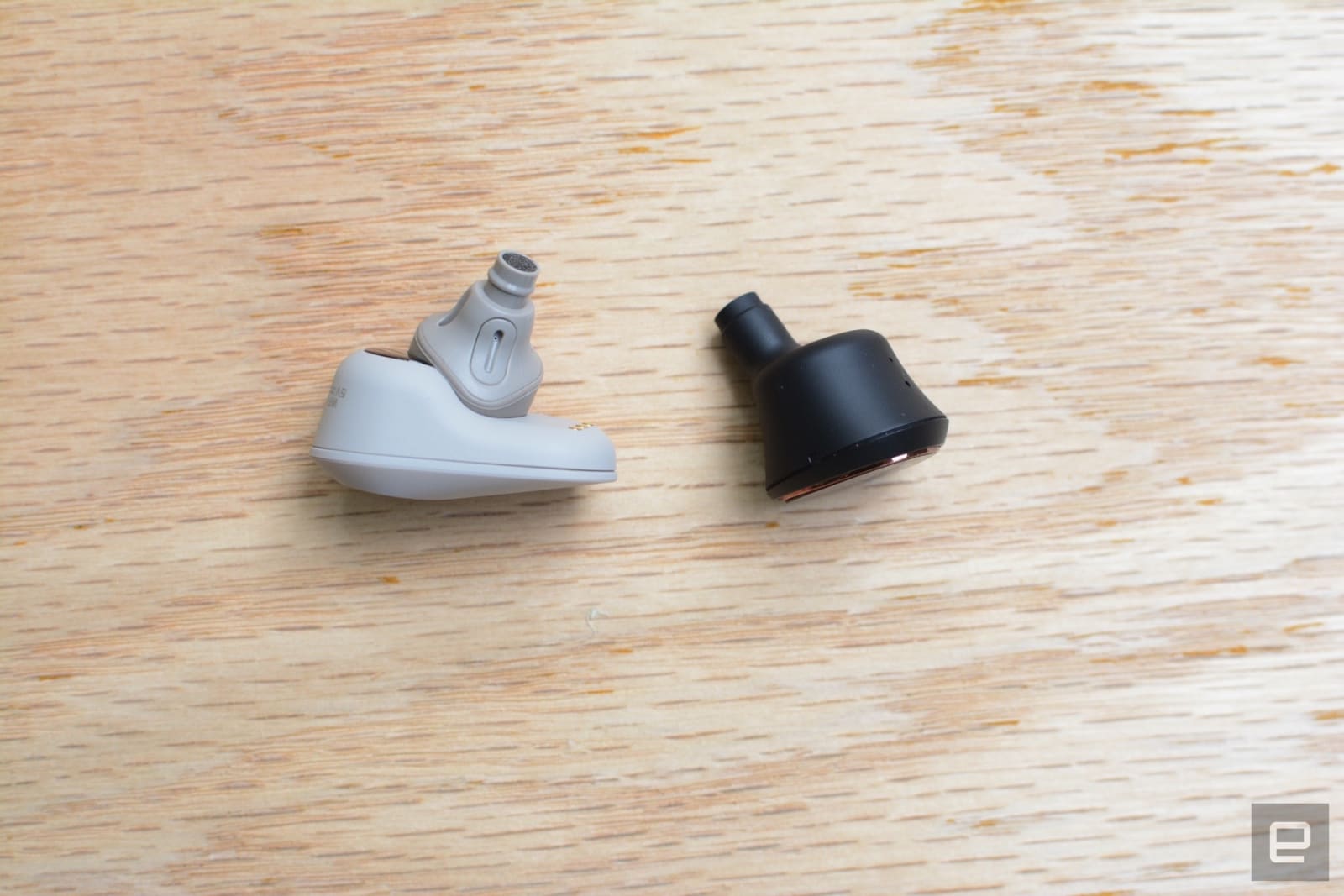 The T5 True Wireless have a unique design compared to a lot of the competition. The outside is a pretty common oval shape, but the part that goes into your ear is much smaller. Klipsch says this is the smallest "nozzle" available, and that it enhances overall comfort. This sounds good in theory, but for me, the smaller component felt like I was pushing these buds further into my ears. For longer listening sessions, they weren't as comfortable as those with larger "nozzles" from the likes of Sony, Sennheiser and others. Even after cycling through the included tips, I couldn't find a solution that felt super comfy.

Despite being IPX4 rated for sweat and moisture, the T5 True Wireless isn't the ideal gym companion. They stayed in place during weight training, but whenever I took them on a run, they'd eventually work their way out. And when I got super sweaty, they'd only stay put for a few seconds. In fact, the last time I took them running, I ended up just holding one because it kept slipping loose. I tried switching to a larger size of tips, but that didn't help.

Like many true wireless earbuds, Klipsch situated on-board controls on both sides. And like almost every company, it has its own take on what it thinks works best. On the right, you can play/pause (single press), increase volume (long press) or skip to the next track (double press). For the left, a single press activates your voice assistant of choice, a long press decreases volume and a double press goes back to the previous song. These are reliable, except for the volume controls. Because you have to hold the button down to make the adjustment rather than a single tap or click, I almost always overshot the intended range. The volume ended up being way louder or softer than I wanted. But hey, some true wireless earbuds don't even have on-board volume controls, so I'll take what I can get.

Besides frustrating volume adjustments, any time I used the controls, I was pushing the T5 further into my ear. I'm aware there's only so much you can do to avoid this with something that's stuck in your ear holes. But because Klipsch opted for a clicky button rather than touch, using the on-board controls can be uncomfortable. Eventually, I figured out a way to hold the earbud in place with my thumb and middle finger, but it's not the best. I often forgot to do it on the first shot. These earbuds also don't automatically pause when you take one or both out of your ears. That's a super handy feature that would've gone a long way here.

Given its experience, you'd expect Klipsch to nail the sound quality, even if it did stumble in other areas. And it does. The T5 True Wireless has a good mix of thick low end tone and punchy highs, with crisp detail so nothing gets lost. A good example of this is Tom Petty's catalog (This is Tom Petty playlist on Spotify). Guitar riffs are clear and crunchy on songs like "Runnin' Down A Dream" and "You Wreck Me." Plucky bass lines and a crisp snare drum are layered in, with a punchy bass drum underneath. Overall, it's a more natural tuning than most headphones, and well-produced albums really shine on these earbuds.

Bass-heavy genres like hip-hop and driving heavy metal also sound great. The T5 True Wireless can handle boomy beats on Pusha T's Daytona and thrashing guitars and drums on Every Time I Die's Low Teens. Even among the chaos of ETID's hardcore riffs and breakdowns, the sound doesn't get compressed to a messy roar. Guitars, bass, drums and vocals all stand on their own. That's not always the case for true wireless buds. 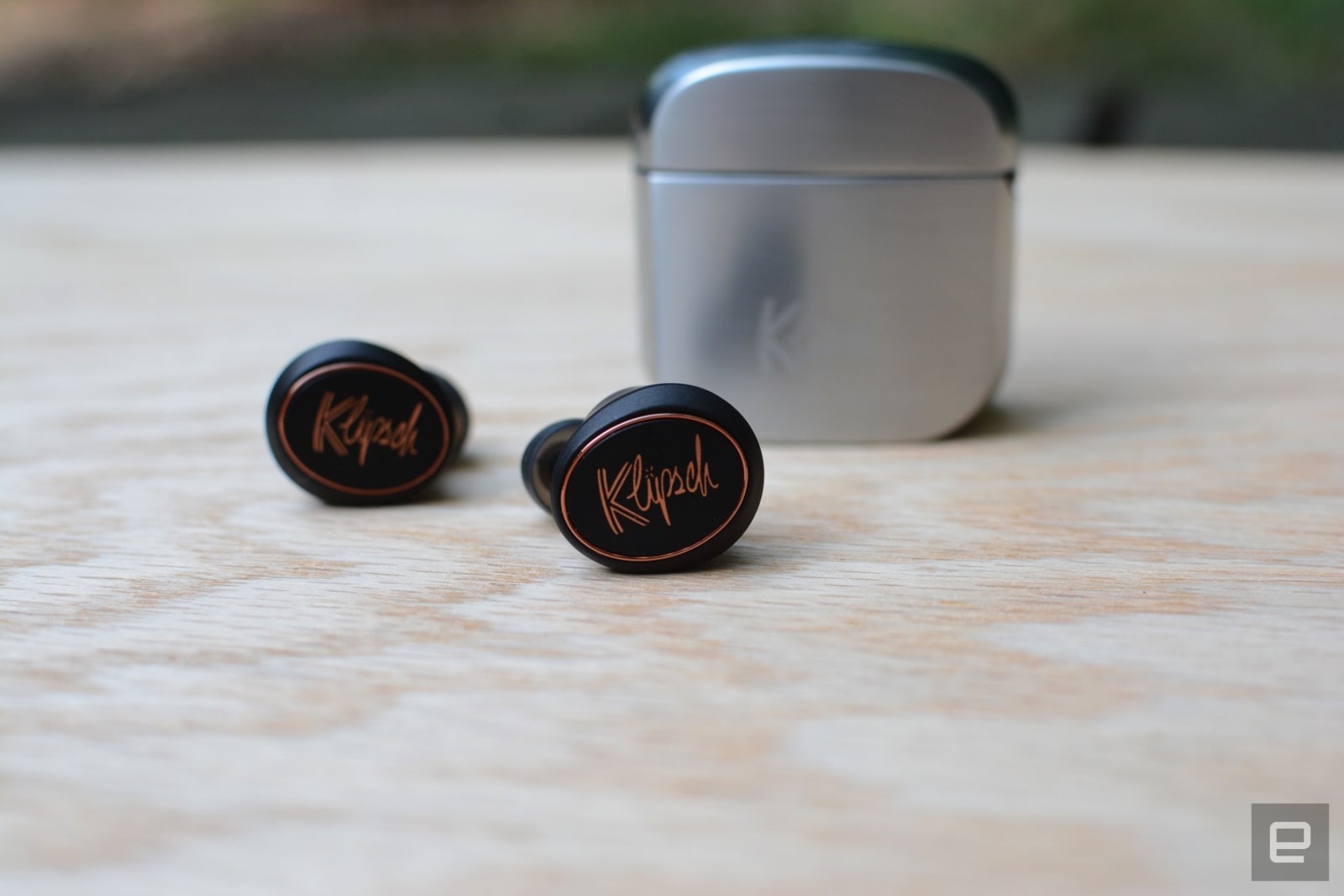 The T5 True Wireless may have the most volume of any true wireless earbuds I've tested. In fact, when you crank these all the way up, they're too loud. But trust me, I'd rather have that issue than not enough, which has been the case on a few models. I like my music cranked to 11, but I may have met my match in the T5s. I ended up keeping things around 70 to 80 percent.

Unfortunately, there isn't a companion app for the T5 True Wireless. Klipsch says one is on the way for both Android and iOS, but it won't be available until early September. When it is available, the Klipsch Connect software will allow you to tweak EQ settings and more. Thankfully, these earbuds sound great out of the box, otherwise it would be a huge problem the app didn't arrive alongside the product. Even still, it would be nice to tailor the sound to your preferences.

Klipsch claims eight hours of battery life on a charge, with three additional charges in the case. That's significantly longer than much of the competition, which averages around five or six. Testing these figures is always a chore for me, mostly because when I'm not using the earbuds, they're stuck in the case so I don't lose them. I'll bet you'll probably do the same. That means they're always charged, unless the case runs out of juice -- which is about once a week with my moderate daily use. If you really need to put that 8-hour promise to the test, you should get pretty close. I managed almost 10 hours when I focused solely on running them all the way down. 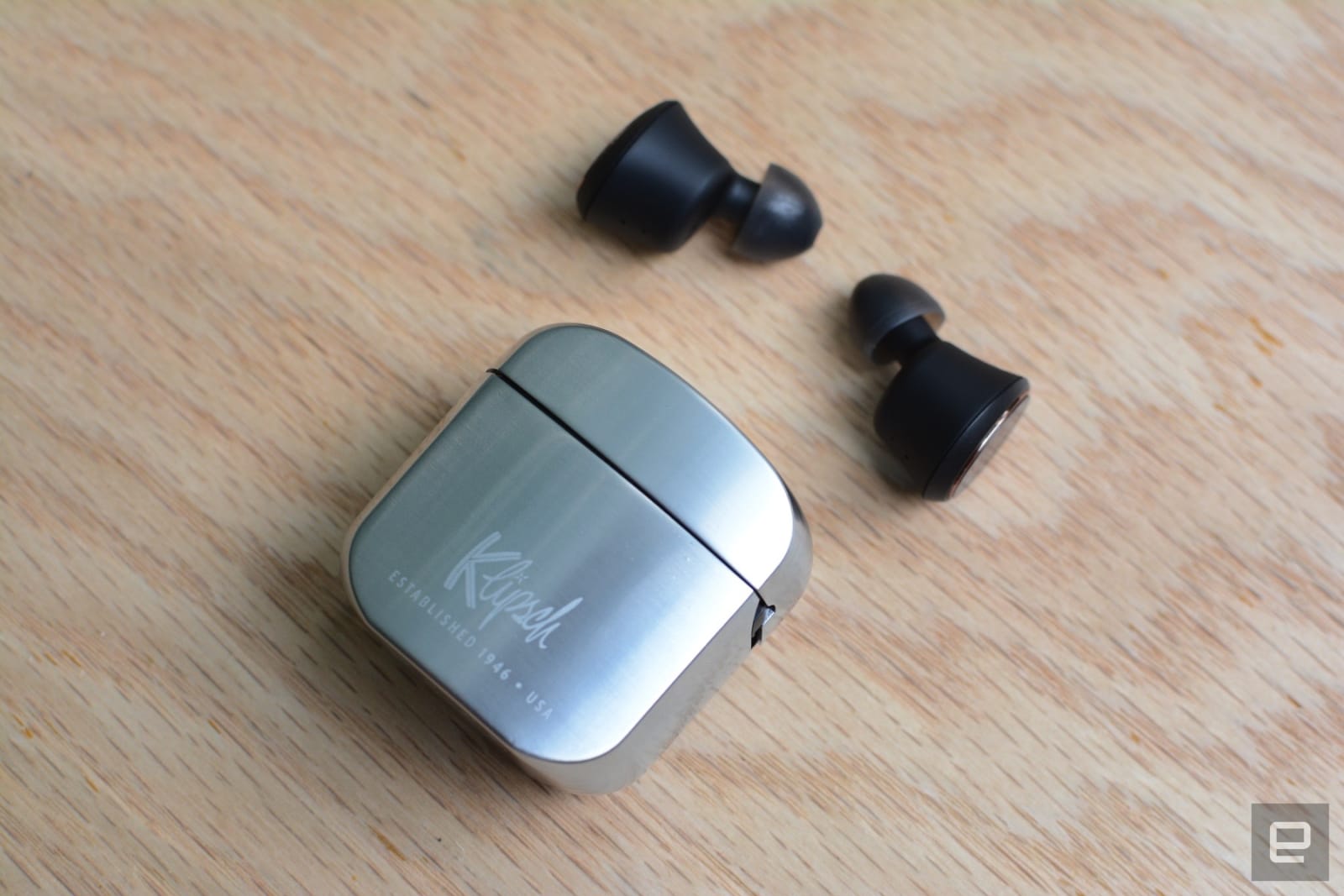 Klipsch has one key advantage over the competition: price. Most "flagship" true wireless earbuds cost around $300, except for Sony's stellar WF-1000XM3 ($230). You might get better sound from the Sennheiser Momentum True Wireless or the Master & Dynamic MW07, but you'll have to pay $100 more for them. I also still like Jabra's Elite 65t as a solid all-around option, especially for $170. Audio quality is slightly better on the Klipsch, but Jabra has a better overall experience -- including comfort and controls. However, if you don't mind spending a few extra dollars, you'll be much happier with the WF-1000XM3.

A move into a new product category isn't easy, and we've seen a number of companies stumble with their first true wireless earbuds. Much like Sennheieser did on its Momentum True Wireless, Klipsch nailed the sound quality on the T5 True Wireless, but these earbuds lack overall comfort and are mired by frustrating controls. It's a shame, because they have great audio, but the complete package just isn't there. The T5 True Wireless is a solid first effort, and Klipsch certainly has the know-how to improve for the next version.