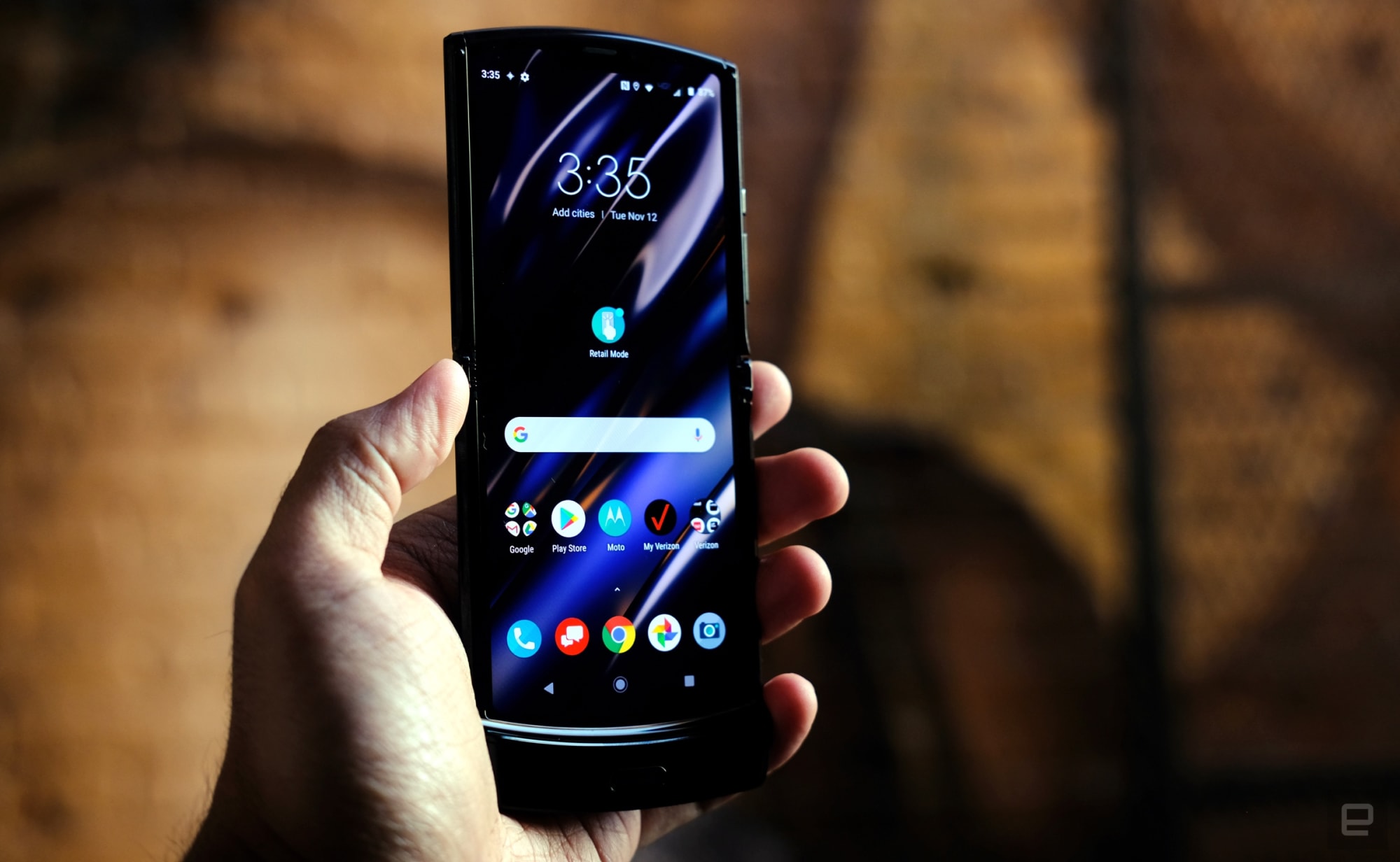 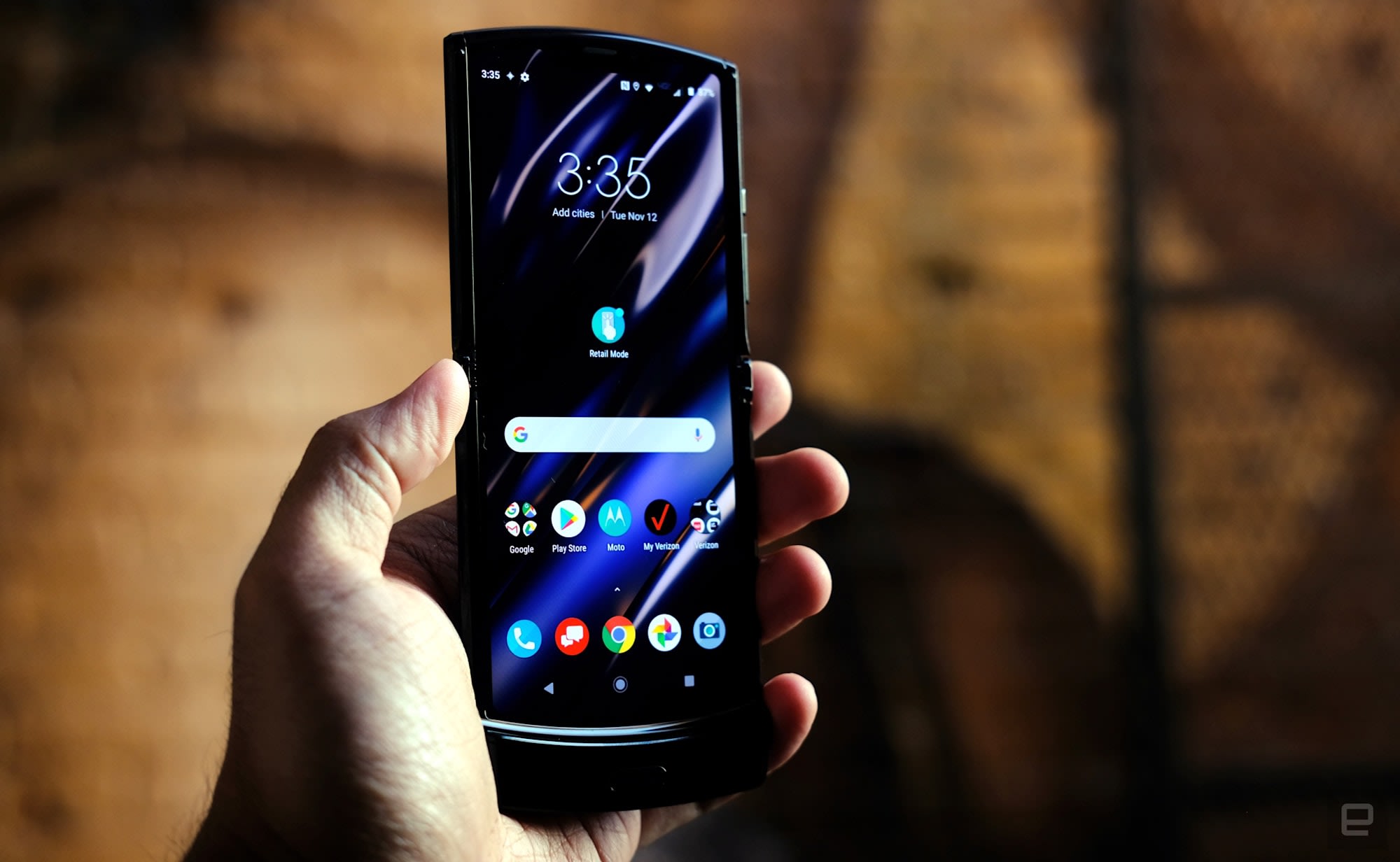 Few phones were as iconic and as ubiquitous as the original Motorola RAZR. Celebs used them constantly, fashion houses cooked up designer mashups, and it wasn't long before friends, family members and co-workers all started carrying them, too. The RAZR was, in other words, an absolute phenomenon, and now it's back.

As countless reports and leaks have confirmed, though, it isn't the RAZR you grew up with. This new version, which will sell for $1,500 when it launches on Verizon next month, is Motorola's first foldable smartphone, and unlike any other foldable we've played with this year. It doesn't unfold into a small tablet. It doesn't pack loads of cameras or flagship components. It is, by Motorola's admission, a "design-first" kind of phone. That might sound concerning to some, and after a bit of hands-on time in sunny Los Angeles, people who demand peak smartphone performance or superior battery life might be a little disappointed.

That's OK, though. Motorola's priority here was to build the kind of foldable device that regular people would want to use, and despite some compromises, I think the company might be onto something.

When Motorola set out to build its first foldable, it went through 26 prototypes of different shapes, sizes and screen configurations before deciding to re-embrace the RAZR's iconic design. To me at least, that's the best decision Motorola could have made. While I was testing the Galaxy Fold earlier this year, I was surprised by the number of people who didn't find it nearly as fascinating as I did. Turns out, that was because the people who weren't thrilled by it didn't particularly want to use a small tablet, regardless of whether it could fold in half. Those people, according to Motorola's research, really just wanted a full-size smartphone that could shrink down into a sleek package when they were done using it. So that's what they built.

When the RAZR is closed, it's very nearly the same thickness as the original: about 14mm. You'll find a big hump up front housing a 16-megapixel main camera and a 2.7-inch glass OLED display for quick interactions (more on those later), while the back features a textured, grippy finish. It's honestly not much to look at all folded up like this, but that's beside the point: The RAZR took up very little space when I slid it into my pocket, and it's even small enough to fit into the very tiny pants pockets women have to deal with.

Of course, the real engineering magic becomes apparent when you open the thing up. What can I say -- it feels really nice. It doesn't snap open the way the original RAZR did, but the motion of the hinges feels fluid and fully in control as the screen swivels into place. I really can't overstate how good a job Motorola did on this hardware; my only real gripe is that the RAZR can be difficult to open with one hand.

When it is open, this thing looks like a proper RAZR, right down to the hefty chin where the phone's fingerprint sensor, cellular antennas, USB-C port and surprisingly loud four-speaker array all live. You probably won't be spending much time marveling at that throwback design flourish when there's a 6.2-inch, 21:9 screen sitting in front of you. It's a bright, punchy panel that handles widescreen videos especially well, but it's not nearly as crisp as screens on other phones -- the resolution tops out at just 2,142x876. That's just one of many compromises Motorola had to make here, but we'll get to the rest in a bit.

In any case, Motorola still deserves serious credit for its engineering work here. The RAZR's folding mechanism is particularly ingenious: Rather than use a single big one like the Galaxy Fold, the RAZR has two smaller hinges, along with a series of sliding plates that give the plastic screen some extra stability. That design choice also means that the creases in that screen are much less noticeable than on the Galaxy Fold; they're there if you really look for them, but they're functionally invisible the rest of the time.

More importantly, that complex hinge design allows the two halves of the RAZR to fold completely in half, with no gaps to let potentially deadly pocket debris inside. Well, almost no gaps. The RAZR's two halves are pressed right up against each other when closed, but if you start to close the phone very slowly, you can see the super-thin display start to lift away from the phone's body. The gap that forms then looks pretty concerning, and it's not hard to imagine something squeezing in there and wreaking havoc. Whether that becomes an actual problem remains to be seen, though; that gap never seemed to appear when I was just closing the phone normally. We'll have to see how well this screen holds up, but for now at least, the RAZR still feels like the most durable foldable out there, despite how thin it is when open.

Motorola is best known for its line of affordable, mid-range smartphones, and it's been only recently that the Lenovo subsidiary has started to get more experimental. I mention this because, well, Motorola phones tend to be pretty boring. From a technical standpoint, the RAZR is anything but. I had completely forgotten the company was capable of engineering this precise, this exciting. That the company pulled off a design like this is tremendously impressive, but it does also mean the company couldn't go crazy with the components inside it.

Let's just get one thing clear here: The Motorola RAZR is a $1,500 marvel of design, not a high-powered flagship smartphone. The RAZR uses an upper-mid-range Snapdragon 710 chipset with 6GB of RAM because anything more powerful would've presented issues with heat management and power consumption. It was plenty fast in our hands-on testing, though: Launching apps, multitasking, loading videos and generally putzing around in Motorola's clean Android 9 build all went off without a hitch.

Your Galaxy S10 or Pixel 4 will still probably run circles around this thing, but on the whole, there's more than enough raw power here to keep most people satisfied. Ditto for storage: There's 128GB available to users from the get-go,

More concerning are the RAZR's batteries -- one lives in each half of the phone, and combined, they have a total capacity of 2,510mAh. That's quite small compared to, well, every other smartphone I've tested this year. For what it's worth, Motorola promises people will still get a full day's use out of the RAZR, and the phone comes with one of the company's 15W TurboChargers for quick refueling sessions.

I get that Motorola really wanted to nail the RAZR's sleek design, but the company is definitely aware that people like big batteries. We'll have to test this thing more thoroughly to say anything for sure, but if the RAZR struggles to last as long as the phones people already have, that just might make it a non-starter.

I haven't said much about how the RAZR works so far because, for the most part, it acts just like a regular smartphone. That alone makes it more conservative than the other foldables we've already tested, but there's something to be said for the kind of clarity the RAZR offers -- unlike the Galaxy Fold, there isn't much of a learning curve here. You just open it, and start using it.

That said, the RAZR does have a few -- and I mean a few -- neat app continuity tricks. Remember that small external display? You can use it to view your incoming notifications, control your music, authorize NFC payments and frame up selfies. When you open the RAZR while you're in the middle of any of those tasks, the full app instantly appears on that big internal screen so you can pick up where you left off. After a bit of playtime, I've come to appreciate the sorts of quick interactions this little front-facing screen allows for, and the way corresponding apps spring to life when the RAZR is opened is a helpful touch.

Even so, I can't help but wish Motorola had cooked up a few more ways to get things done on a RAZR without having to open it. That external screen is too small to fully display apps, so that's out, but I'd love to access quick controls for say, my Hue lights, or sift through the first few tweets in my timeline. In fairness, though, Motorola says it'll continue to evaluate which apps could be coaxed into working well on that secondary screen, and that's really all I can ask for. Foldables are still so new that companies don't have a crystal clear sense of how people will actually want to use them. In other words, expect a lot of trial and error across the industry for a while.

So far, the camera seems pretty decent too: It has an f/1.7 aperture so it handled even low light without much fuss, and you can use it to shoot standard photos and selfies when the RAZR is closed. (If you insist on shooting selfies while looking at the full-size screen, there's a 5-megapixel camera above it that'll get the job done.) I haven't been able to review any of my sample photos on a bigger screen so I'll hold off on the judgment, but let's face it: If you really care about getting great smartphone photos, this probably isn't the way to go.

By now, it's clear that Motorola's first foldable has its share of limitations, perhaps too many for some people. $1,500 is a lot of money to ask for a phone that won't deliver the latest and greatest performance or battery life or cameras, after all.

Even with all that said, I can't help but feel optimistic about Motorola's work here. The RAZR is the first foldable I've ever used that I could hand to my parents or my non-phone-nerd friends and feel good about it. Its design is first-rate. It's easy to understand. It's more durable than I expected it to be. And perhaps most important, Motorola's take on foldable design seems more broadly appealing. (Samsung seems to think so, too.) We're not looking at a smartphone that morphs into a tablet; it's just a more pocketable kind of smartphone. Who wouldn't want one of those?

At the end of it all, it's too early to tell whether Motorola's attempt will be the first to really make foldables A Thing for people. If nothing else, though, the new RAZR is proof that Motorola still has what it takes to make ambitious, iconic hardware, and with any luck, its foldable plans won't end here.

In this article: foldable, gear, hands-on, lenovo, mobile, motorola, razr
All products recommended by Engadget are selected by our editorial team, independent of our parent company. Some of our stories include affiliate links. If you buy something through one of these links, we may earn an affiliate commission.