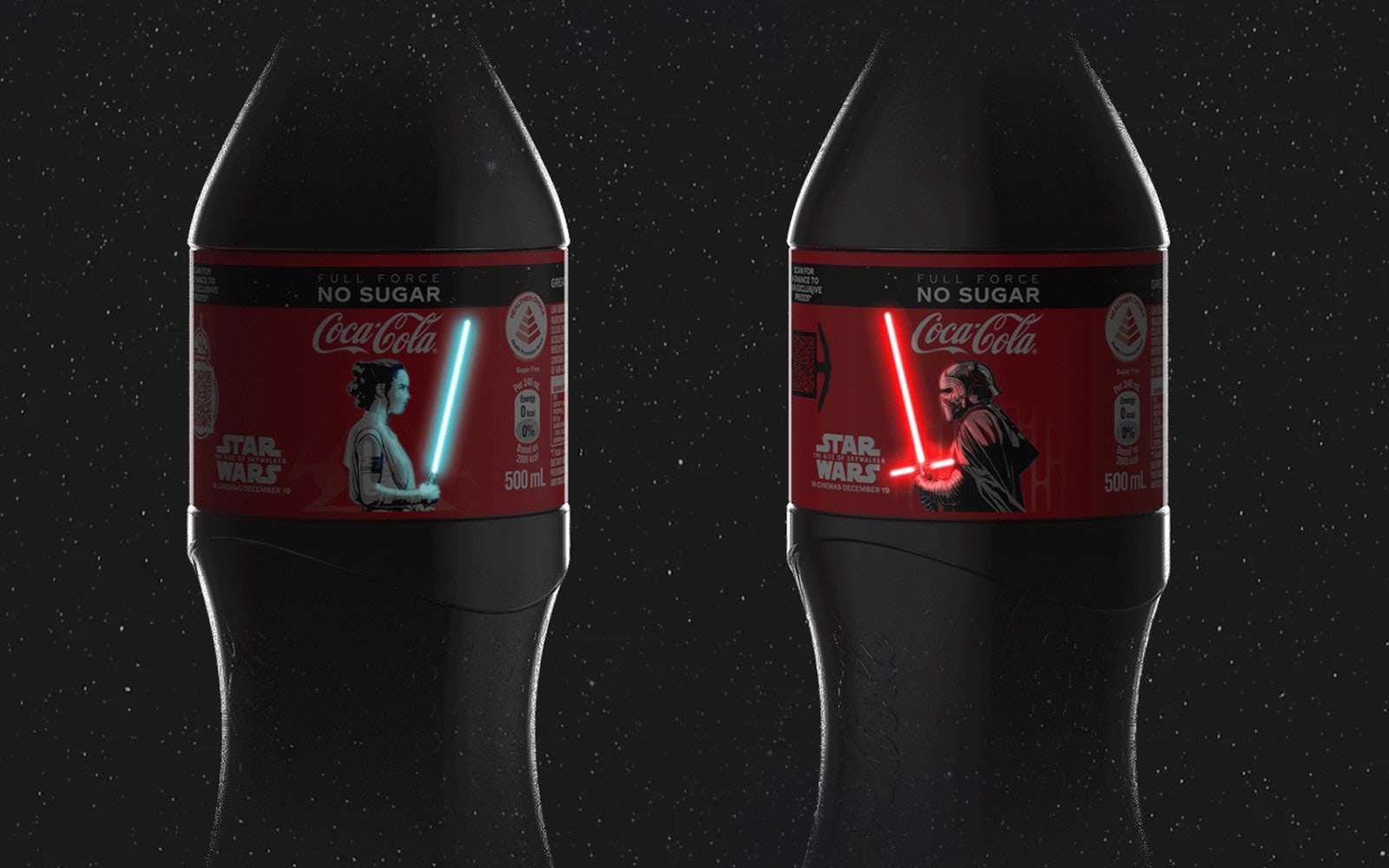 With Star Wars: The Rise of Skywalker coming out on December 20th, you're bound to see a lot of products that tie into the upcoming movie, but few will probably be as unique as these Coca-Cola bottles. They feature main characters Rey and Kylo Ren, with lightsabers that light up anytime you touch the labels.

If you're wondering what kind of space magic allows a bottle to light up, the answer is organic light-emitting diodes (OLED). Yes, the same technology that likely powers the display on your phone or high-end TV -- and inspired Engadget's favorite K-pop song -- is at work here to allow Rey and Kylo Ren's lightsabers to come alive.

The tech was created by a Berlin-based startup called Inuru. Each bottle includes one of the company's smart labels. The labels feature a built-in printed battery and the diodes needed to illuminate something. By touching the label, you complete a circuit, which in turn sends an electrical current to the diodes. According to Inuru, the printed battery can sustain a minimum of 500 activations. The company claims the diodes are "eco-friendly" because they're manufactured without the use of rare earth metals. A Star Wars tie-in is obviously one of the more clever applications of the smart labels, but the company sees the tech finding its way into packaging, advertisements, home appliances and more in the future.

Keep your eyes on these Limited Edition Lighted Star Wars: The Rise Of Skywalker Coca-Cola No Sugar Bottles! In anticipation of the upcoming movie, we will be releasing 5 clues to 5 locations per day on our FB, IG, and website on where to get your hands on one over the next 3 weekends (Fri - Sun) from 6 to 22 Dec. Let the #GalacticHunt begin! >> Link in bio Catch Star Wars: #TheRiseofSkywalker in cinemas this 19 December. #StarWarsSG *T&C applies

Unfortunately, if you want to get your hands on these limited-edition bottles, you'll need to book a trip to Singapore. At the moment, Coca-Cola plans to only release 8,000 bottles as part of a "Galactic Hunt" promotion the company is running between December 6th to 22nd in the city-state. For the three weekends between those dates, Star Wars fans in Singapore will need to solve clues to get their hands on the bottles. Like with most technologies, we'll likely see these types of labels proliferate as the tech gets cheaper.

Via: Inuru, Mothership
Source: Coca-Cola Singapore
In this article: design, entertainment, gear, OLED, star wars, The Rise of Skywalker
All products recommended by Engadget are selected by our editorial team, independent of our parent company. Some of our stories include affiliate links. If you buy something through one of these links, we may earn an affiliate commission.