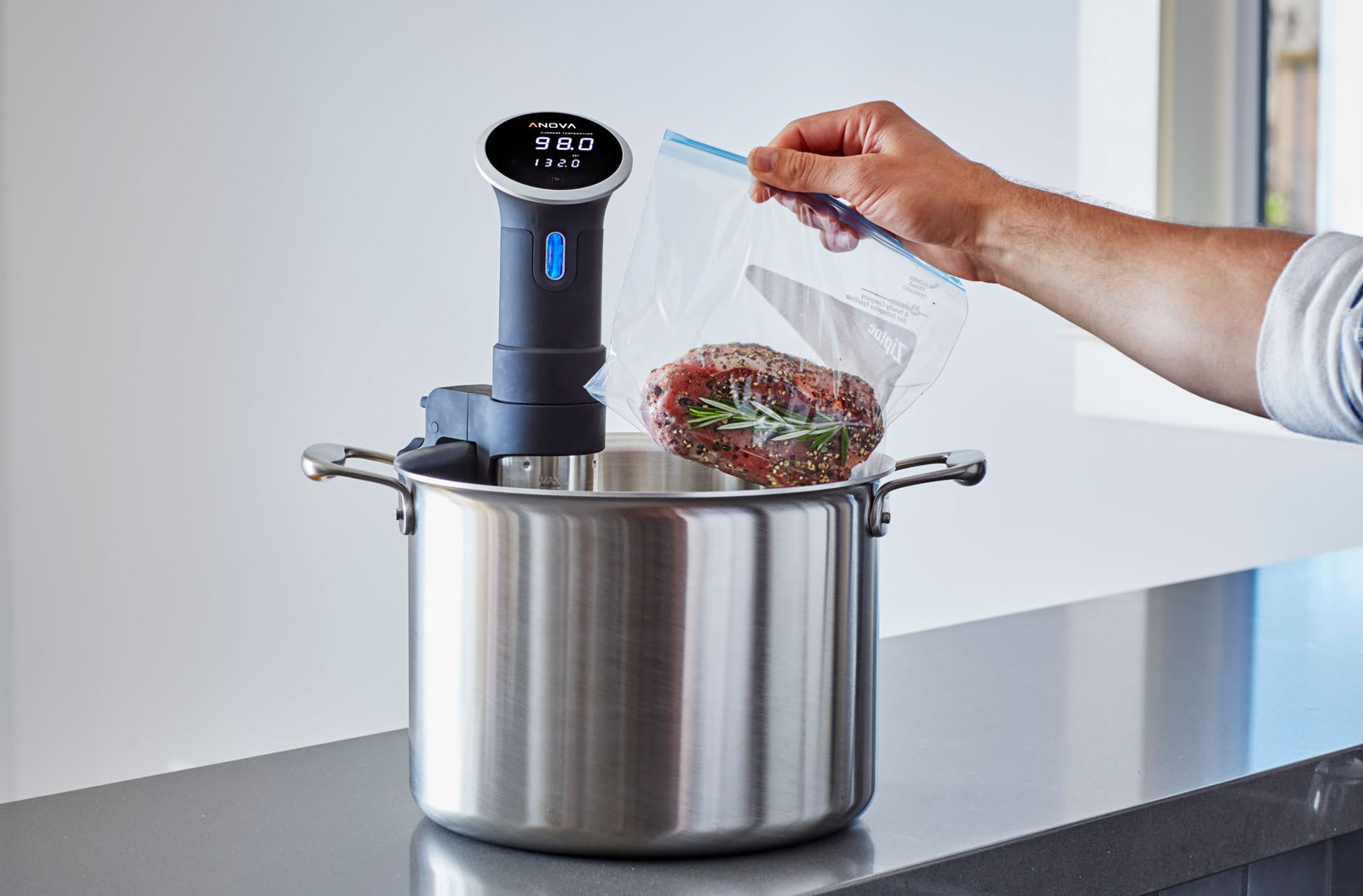 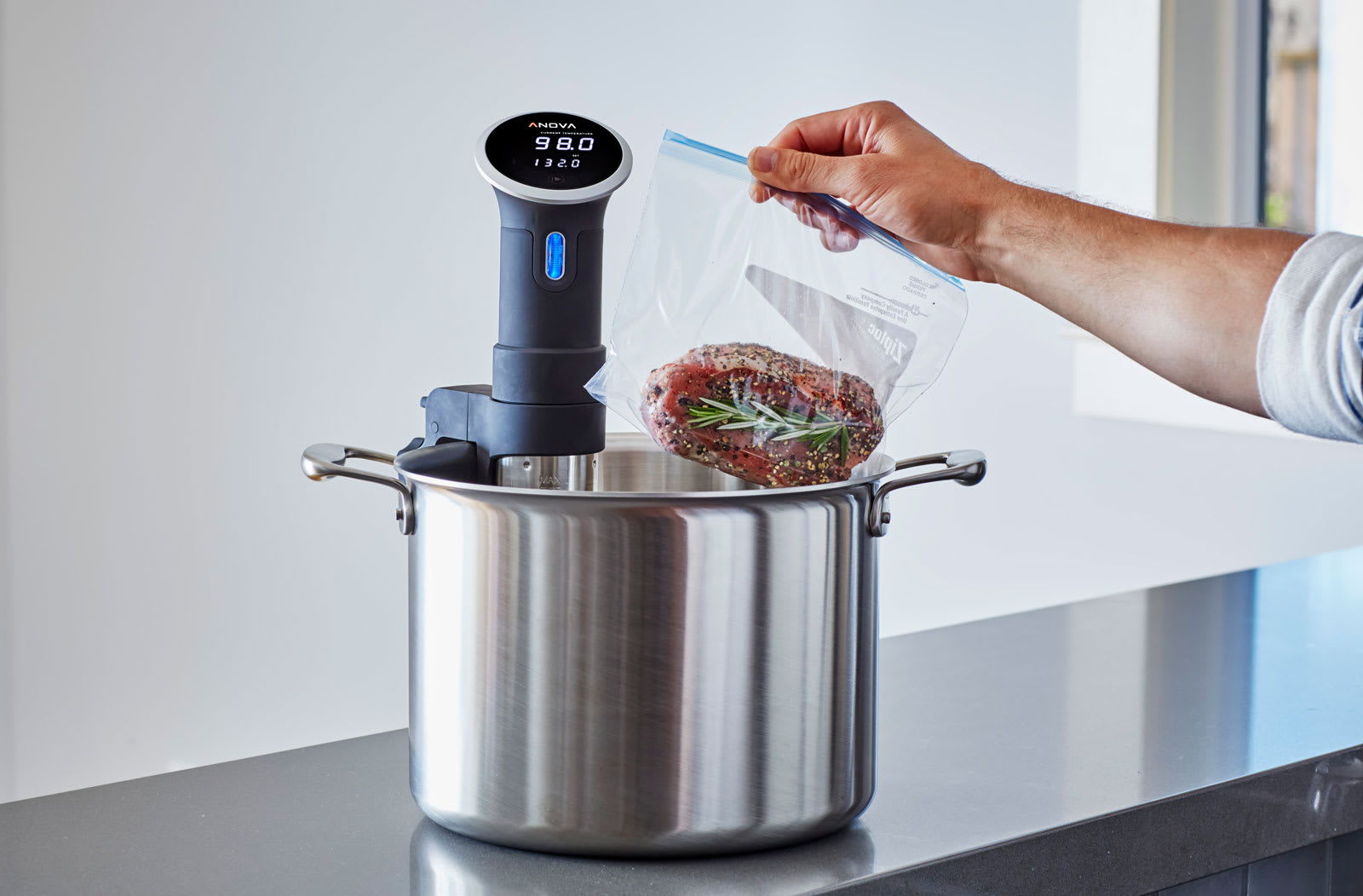 Cooking via sous vide has been the province of professional kitchens for decades, and for good reason: A temperature-controlled water bath ensures perfectly cooked food. Instead of worrying about whether a steak is medium rare or whether that chicken breast will be dry, simply dial in the desired temperature, dunk in your vacuum-sealed food ("sous vide" is French for "under vacuum"), wait awhile and it will be done to perfection, with little to no guesswork required.

In the last few years, sous vide cooking has become increasingly accessible. That's largely thanks to the rise of affordable wand-like immersion circulators that can heat water efficiently without taking up a lot of counter space. There is another style of sous vide machine that's more like a stand-alone water oven -- such as the Sousvide Supreme ($425) -- but these take up a lot more room and tend to be expensive. Immersion circulators, on the other hand, are infinitely more versatile as they can be attached to any heatproof vessel (and are typically cheaper).

Almost all of the immersion circulators on the market work the same way, so you really can't go wrong whichever you choose. That said, there are a few criteria to keep in mind when selecting your preferred model. For one, you'll want it to keep accurate temperature and to maintain that temperature for an extended period of time, especially for foods that take over a day to cook. (This isn't uncommon, especially for tough cuts of meat.) It's better if it's powerful enough to heat up water quickly, though you could always help it along by using hot tap water to start. 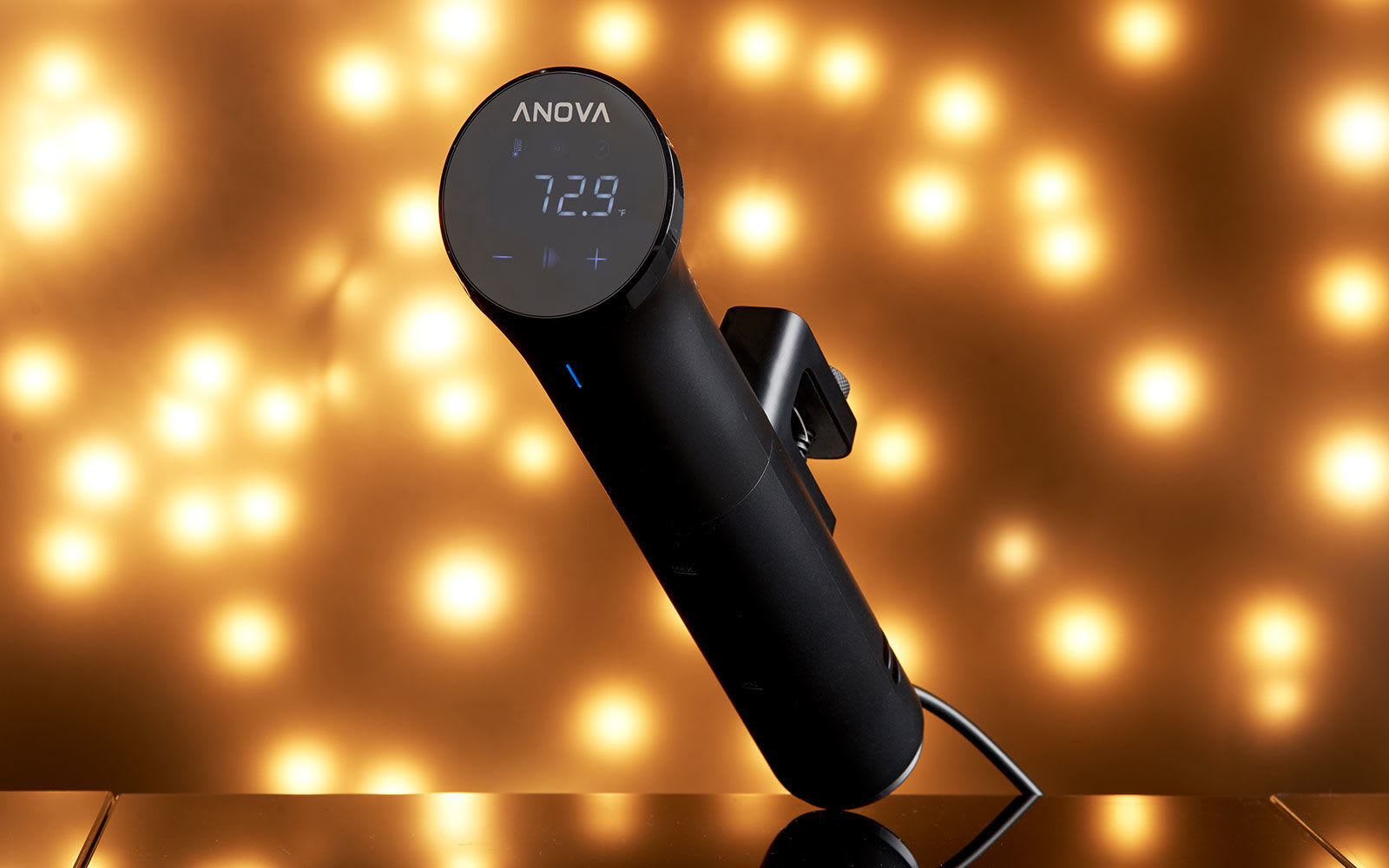 Most models these days come with Bluetooth or WiFi (or both), which helps you set and monitor your sous vide temperature from an app on your phone. Many of these apps also come with recipes where you can tap on a preset temperature to start cooking a little faster. Bluetooth-only models work when you're within 30 to 40 feet of the cooker, while those with WiFi let you supervise your food from anywhere in your home, or as long as you're on the same network.

Several Engadget staffers, as well as our colleagues at Serious Eats and the Wirecutter, tend to prefer the sous vide devices from Anova, as the company has a strong track record for precision and the interface is intuitive. Anova offers several different models at varying power levels (and price points) depending on your preference. The lower-end Nano, for example, won't heat up water as quickly and doesn't have an adjustable clamp, but it's only $80 and will likely suit most home cooks. If you're a little more ambitious or see yourself cooking a lot of things via sous vide (and thus would need more power), then upgrading to the higher-end Precision Cooker ($149) or Precision Cooker Pro ($298) might be a better choice. 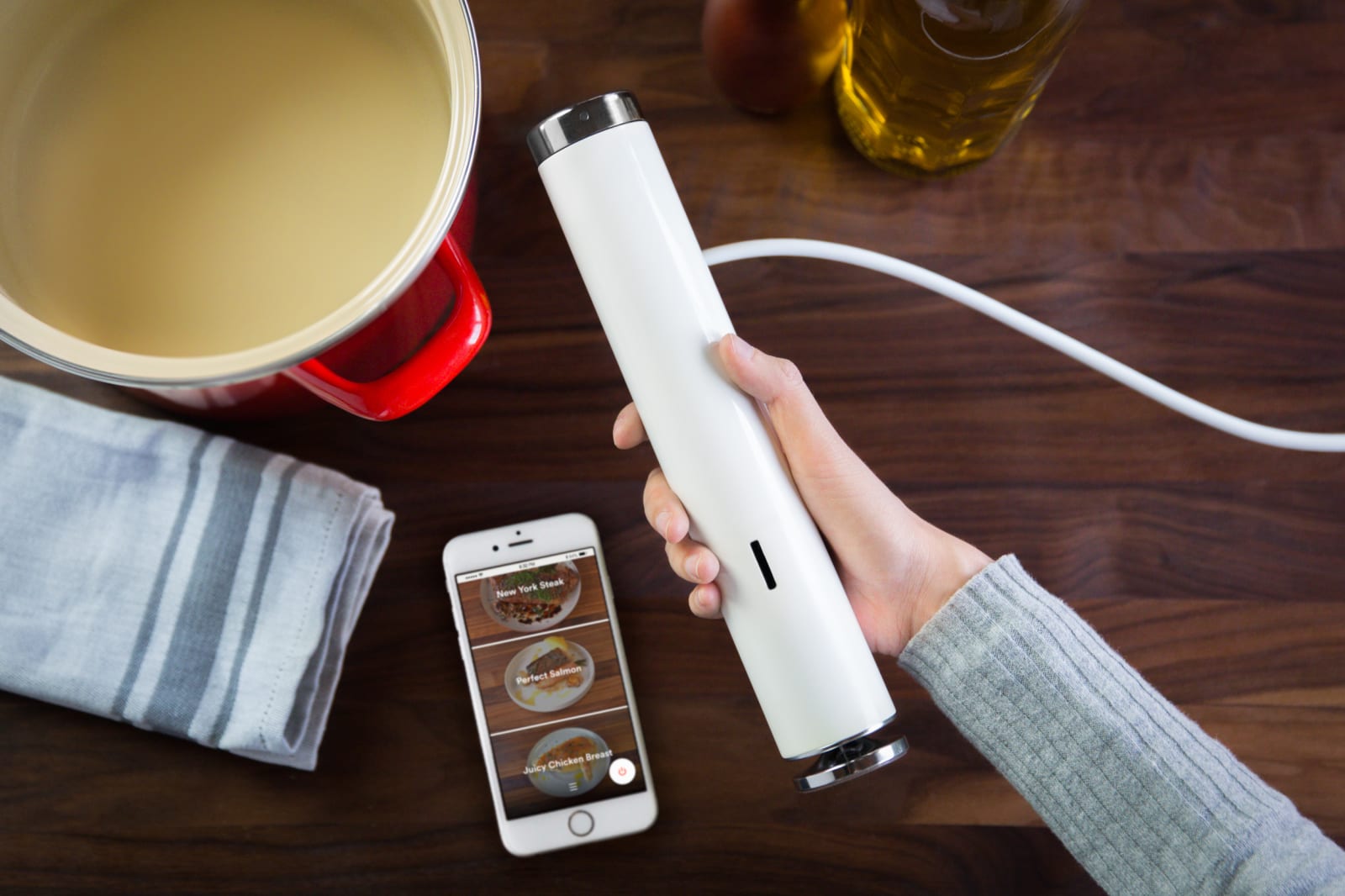 Another popular choice is the Breville Joule ($145) (formerly known as the Chefsteps Joule, until Breville acquired the brand), which is a personal favorite of mine due to its small size. It's a little more powerful than the aforementioned Nano and can heat up water a few minutes faster. I also like that it has a magnetic base, making it easier to attach to certain pots. The one downside is that it lacks onboard controls; the only way to use it is via the companion app. I personally don't find this to be a problem, but if you simply need to be able to see the temperature at a glance and dial it up or down with ease, then it might not be for you.

it's also worth mentioning the Monoprice Strata, which is the cheapest of the lot at only $42. There's no WiFi or Bluetooth connectivity here, but it gets the job done regardless.

What else to consider

At the bare minimum, the only other items you need to cook sous vide are a large metal pot (big enough to fill with water), and zipper-lock freezer bags to put the food in. Rather than using a vacuum sealer to get rid of air, you would use the water displacement method: Immerse the bagged food in the water while partially unsealed, and water pressure will push the air through the opening. Once everything is mostly underwater, you can seal the bag and it'll stay submerged.

If it still floats, you can stick one or two spoons in the bag, and that'll hopefully weigh things down (J. Kenji Lopez-Alt from Serious Eats also suggests using a large binder clip attached to the bottom of the bag along with a heavy spoon). If you're concerned about water getting in the bag, you can attach the bag tops to the pot with binder clips, thus keeping the bag upright. 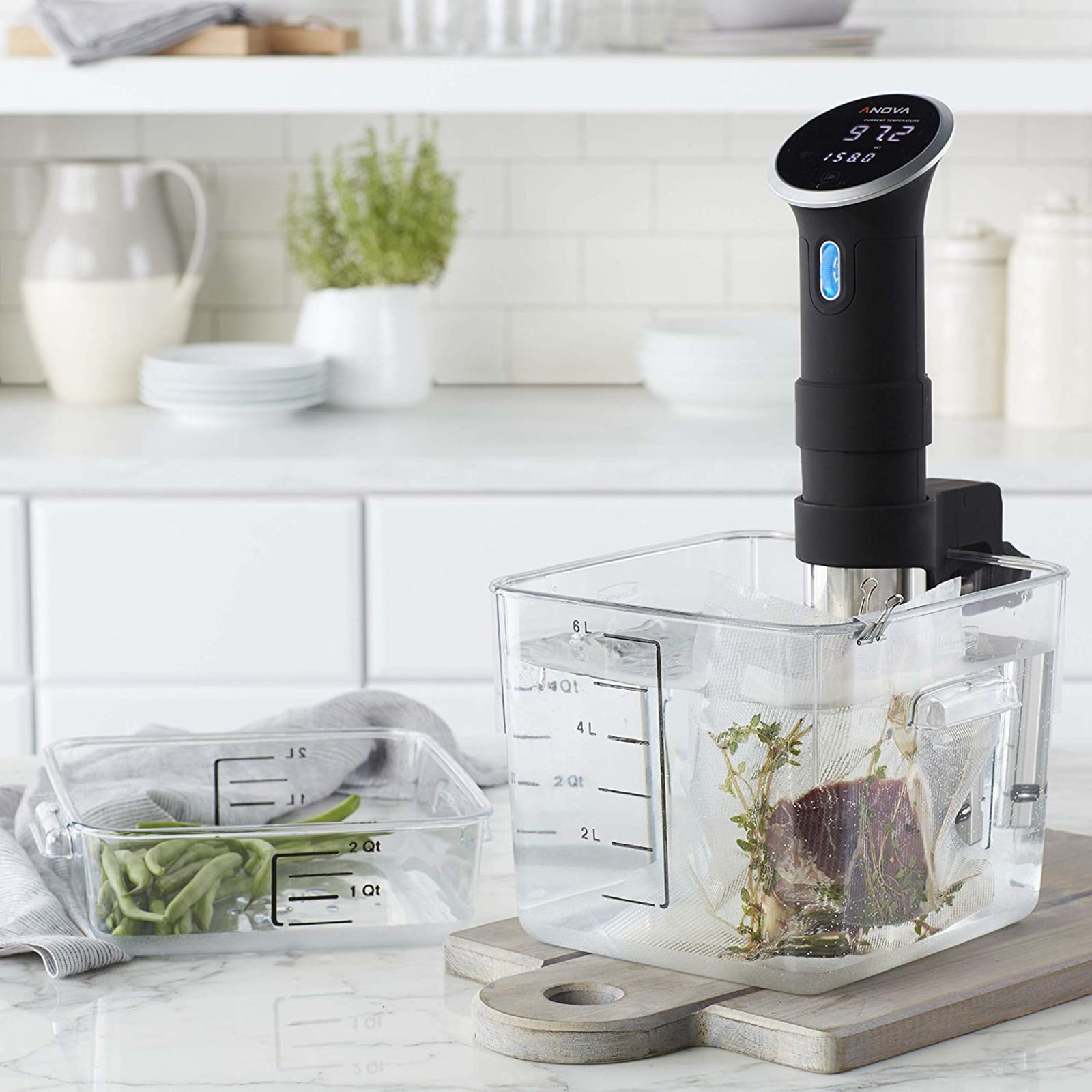 If you're really serious about sous vide, you might want to invest in some specialty equipment. Instead of pots, for example, you could opt for large restaurant-grade plastic containers by Cambro or Rubbermaid. Not only is plastic a better insulator than metal, there's generally more space for more food, which is good when you're cooking for a crowd.

Whether you use a pot or a plastic container, it's a good idea to cover the vessel with plastic wrap when cooking for long periods, so that water doesn't evaporate as much. Some companies, like Chefsteps, offer custom silicone pot lids that are made specially to accommodate their sous vide cookers. Alternatively, Lopez-Alt offers a much cheaper and more ingenious solution: Cover your water in ping pong balls. They float, and they'll slow down evaporation as well.

Additionally, while zipper-lock bags work well for most tasks, it's still not a bad idea to get a vacuum sealer along with thicker plastic bags designed specifically for sous vide. For one, this lets you sous vide vegetables or braised meats, which typically require a higher temperature. (Zipper-lock bag seams might fail when it's that hot.) This also lets you freeze a bunch of food, vacuum seal them and sous vide packets straight from the freezer, which is great for batch cooking.

You likely already have this at your disposal, but another handy tool is a good skillet to sear your meat. That sous vide device might be able to cook your steak to medium rare, but it won't be able to brown it. A cast iron skillet, on the other hand, will. You could also consider a torch -- Wirecutter likes the Bernzomatic TS8000, and we've seen others use a Searzall -- but a cast iron skillet is far more affordable than either option. Of course, if you have a grill, you can use that too.

There are other miscellaneous items that could prove useful. Lopez-Alt likes having a pot lid organizer immersed in the container to help separate several submerged bags. If you want to make custard, yogurt or breakfast cups with your sous vide cooker, you should get yourself some mason jars too.

One more indispensable item worth considering: a trivet to rest your water vessel on so you don't destroy your countertop.

Since affordable sous vide cookers have been in the market for a few years now, there is no shortage of recipes and guidelines online to help you figure out what to do with your newfangled kitchen gadget. The links below are some of our favorites, though bear in mind that a lot of this is based on personal taste. Your mileage may vary.

It only makes sense that the maker of one of the most popular sous vide machines also has a pretty deep library of sous vide recipes. If you're ever at a loss as to what to make via sous vide, simply peek at this website, where you can search for recipes from professionals and amateurs alike.

We've mentioned it several times here already in this guide, but Serious Eats truly is a remarkably useful resource for all things sous vide. Lopez-Alt uses a science-based approach when developing his recipes, so if you follow his temperature guidelines, you won't go wrong. His guide to sous vide steak is a favorite among Engadget staffers, as is his take on slow-cooked sous-vide style eggs, which results in some of the best eggs I've ever had.

Years before making the Joule, Chefsteps made a name for itself as a cooking school with a heavy slant on food science, tech and molecular gastronomy. That's probably why the sous vide recipes from Chefsteps are some of the more creative ones we've seen on the internet. Not only does it teach you how to make that perfect chicken breast, it'll walk you through the perfect accompaniment for said chicken breast -- perhaps a crunchy apple fennel salad and a buttery carrot puree. Other favorite recipes include wonderfully tender salmon filets, juicy pork chops and Chefsteps' own interpretation on the "sous vide egg bites" you sometimes find in certain Starbucks shops.

This is actually a cookbook from the people behind the Nomiku WiFi sous vide machine (which has since been discontinued), but the recipes in it will work with any sous vide device. Not only does it have beautiful photographs, it also offers fantastic recipes like jerk chicken wings, duck confit and chocolate pots du creme.

In this article: anova, breville, buyersguide, chefsteps, food and drink, food-and-drink, foodanddrink, gear, joule, seriouseats, sous vide, sousvide, thebuyersguide
All products recommended by Engadget are selected by our editorial team, independent of our parent company. Some of our stories include affiliate links. If you buy something through one of these links, we may earn an affiliate commission.