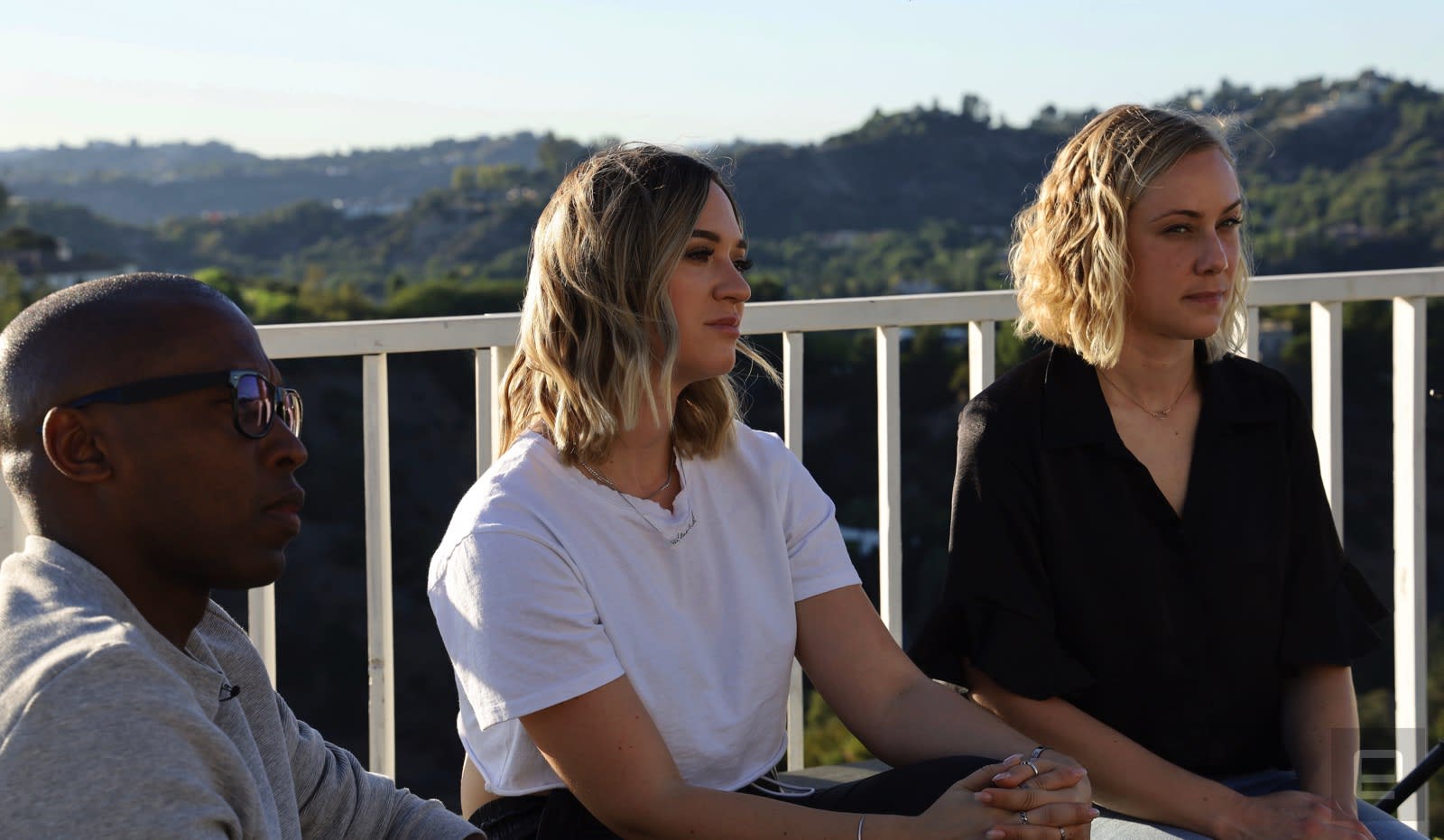 Jacques Slade is a 43-year-old father of three who lives an hour north of LA. He has worked in real estate, taught at a charter school and written music; he also spent nine years at Washington Mutual bank before its collapse. But it was his YouTube channel, which he started in 2013, that's given him a career. He now has more than a million subscribers and recently showed Jeff Goldblum how to unbox a pair of Nikes, on the actor's new Disney+ show.

On a Wednesday in October, Slade stood on a pedestrian bridge in suburban southern California's over-90 degree sun, held a brand-new Puma sneaker in his outstretched palm and tossed it in the air. In his other hand he held his camera, trying to snap the shutter to get the perfect floating shot. A couple times the shoe tumbled to the floor. Slade swore. He reviewed his shots. "Trash!" he said.

Though Slade is best known for talking about sneakers, brand deals -- his Puma photos will wind up on Instagram with the hashtag #ad -- are crucial to his making a living. It took three or four years for the offers to arrive, but these days YouTube pays the mortgage and bills while his other gigs make the majority of his income. The same day as the Puma shoot, he filmed What's Poppin, his two-and-a-half minute show on Instagram Stories where he riffs on pop culture news. In the evening, he hosted a show for NBC Sports.

Hosting, in fact, is where he sees his YouTube fame leading. "I think for me that's the next chapter of what I wanna do," he said. "That's been my plan B just because social media, YouTube -- you just feel like it disappears at any moment."

Countless YouTubers have the same feeling of precariousness and will give the same reason for it: the streaming platform's algorithm. Since about 720,000 hours of footage -- equivalent to more than 82 years -- are uploaded to the site daily, a major decider in whether a video gets seen (and thus how much a YouTuber gets paid through AdSense advertising revenue) is its appearance on the site's front page or "up next" column. But despite constant theorizing and probing, most creators are in the dark about what it takes to get their videos surfaced, leaving them in constant insecurity that they might wake up one day to be invisible and irrelevant.

"They have built their entire livelihoods on one particular platform, and they don't own the content," said Brooke Erin Duffy, a media sociologist and associate professor at Cornell University. As for any folk theories circulating about how to get your videos featured? "It's pure speculation," she said.

Burnout is not a YouTuber's problem as much as a modern condition.

Slade was one of several YouTubers that Engadget spoke with in 2018 when all of this frustration came to a head. Big-name YouTubers like Bobby Burns, Elle Mills and Lilly Singh announced they were burned out and would be taking a YouTube hiatus. The discontent permeated the platform, the media and even VidCon. A year later, we wondered: What did they do next?

The truth is that burnout is not a YouTuber's problem as much as a modern condition. Overtime at McDonalds and Amazon is algorithmically calculated on short notice, a process called on-demand scheduling, and 41 million Americans are now "independent" workers.

The gig economy affects both Uber drivers and social media stars. They both work for opaque algorithms, with a feeling their job could disappear the second the platform decides to change. Meanwhile their public, personal brand -- quantified in a driver rating or view counts -- matters more than anything.

Duffy warily calls influencers "idols of promotion" -- role models for the masses for how to be a good worker in a tech-optimized, uncertain labor market. But dig into the daily lives of YouTubers and that label is also a cautionary, extremely public tale for what the future of work might look like for an increasing number of people.

"There's always this undertone of like, 'I can't slip up,' 'Cause if I make a mistake then it'll all go away," Slade said. He describes the feeling as something that's always chasing you, or a "monkey on your back." "I wish I knew what it would take to get rid of it," he said.

YouTubers have certainly tried the traditional way of preventing burnout: to simply have a break.

Take Alisha Marie. She is closer than Slade to the archetype one might imagine for a YouTuber: blonde, 26, from California, with shaped eyebrows. She made her name making beauty and makeup videos which she dropped out of college to do full time. These days, she attends a private celebrity gym plastered with signed pictures of J.Lo and various Kardashians; her Maltese Shih Tzu has more than 450,000 Instagram followers.

Last May, she was one of many YouTubers to announce a hiatus from her channel. Since her return, she's started a podcast called Pretty Basic. She also makes money selling merch (for instance, hoodies that say "SO EXTRA") and, of course, getting deals for sponsored ads. The goal, as with Slade, is not to have all of her eggs in YouTube's basket.

"After going through my whole burnout, I think I've realized that I trust myself more creatively, where maybe in five years I'm not doing this," she said, referring to YouTube. "Honestly, I would hope that I'm doing the same thing, but maybe it changes completely or maybe, honestly, YouTube's done for me."

The challenge with the gig economy is that if you take a day off, you don't get paid. The particular strain felt by YouTubers is that if they stop producing, they fear they'll not only lose revenue on the time they're away but also stop getting recommended by the platform on their return. YouTube publicly encourages creators to take a break, but that doesn't change that basic tension, according to Karen North, a clinical professor of communication at USC. "Platforms might promote 'we support you and your mental health,' 'we support you having a normal life and a vacation,' but it could be a mistake for some people, because they could lose their audiences," she said.

A YouTube spokeswoman said, "We want to reassure creators that our systems do not take upload frequency or past video performance into account when recommending new videos to users and if they need a break that their audience will be on YouTube when they return." She added, "There is no pattern that leads to success on YouTube, but creating engaging [content] should always take priority over producing a certain volume."

There are numerous other pressures common to freelance media workers: the potential isolation of working without a team, the lack of separation between your work hours and personal hours, the need to run the entire business side of a channel as well as the creative labor.

But compared to the traditional industry, there is no break between TV seasons or film projects, and the metrics that determine a YouTuber's worth are in their face daily. Influencers who face trolling online often aren't criticized for their work -- like an individual song -- but for their very personality.

Consider the sheer number of geographically dispersed creators alone, North said. "It's very hard to think of a scenario where any platform can offer the right kind of help for the right number of people."

For mental health YouTuber Kati Morton, finding some kind of stability has meant using Patreon, which contributes about half of her monthly income and is her most consistent revenue stream. She's been on it for the past four years; her channel has existed since 2011.

Patreon is a service for fans to pay monthly subscriptions to online creators in return for certain benefits. Morton has more than 400 patrons, half a dozen of which pay her $250 each month. That gives them -- among other things -- a monthly one-on-one Skype session with Morton just to shoot the shit.

Morton, 36, has reason to feel secure. She has specific expertise as a trained clinical psychologist, which also means a backup plan in private practice should the videos not work out. Patreon provides a stable living, but she also has close links with her "partner manager" at YouTube, whom she can consult if a video is not getting views. She has a solid 820,000 subscribers, puts out one video per week and has a published book. Like both Slade and Marie, she also has help: Her husband, Sean, used to run a film production company -- reality TV, corporate-training videos on how to use medical devices -- and now spends most of his time shooting and editing Morton's videos. Morton has an assistant, her upstairs neighbor.

But it's rare to find this kind of niche. The dream of merging passion and commerce, getting paid to simply live your life on camera, has for a long time been misrepresented -- usually by the people on camera themselves. Now more kids in the US want to be YouTubers than athletes or astronauts. The fact that traditional employment and social mobility appear so fragile today can make the idea of overnight fame even more appealing -- the quickest or at least most visible route to some kind of good life.

More kids in the US want to be YouTubers than athletes or astronauts.

Yet most people don't make it. A recent study showed that about 85 percent of YouTube views go to three percent of channels. Based on a sample of 19,000 channels observed over a decade, the study showed that a video in 2016 got a median number of 89 views whereas in 2006 it got more than 10,000. Meanwhile, major channels like Ryan's World are reported to make eight-figure annual incomes.

"My sense is it's very much a kind of winner-takes-all economy, which can only sustain so many people aspiring to do this," Duffy, the Cornell academic, said.

Ironically, the surge of influencers sharing their tales of mental health struggles online has drawn a lot of eyeballs to their accounts. Social media, after all, rewards authenticity, and this kind of raw vulnerability feels genuine. The recent rise of candid burnout discussion on YouTube has certainly helped unveil the cost of participating in the online micro-fame game. And unless you're a superstar, it's become increasingly clear that the key to finding career stability as a YouTuber is to look beyond YouTube.

That's why some of the channel's most recognizable faces peddle merch, set up Skype sessions with fans and toss sneakers in the air for the 'gram. In fact, Slade, Marie and Morton know they're the lucky ones. They do this job full time, they have regular income outside YouTube and they've made backup plans if the streaming service were to disappear tomorrow. Still, when Engadget got them together to discuss burnout, we asked them how secure they felt on YouTube on a scale of one to 10, and they all gave us the same answer: five.

They discussed how even the fortune of rising to the top can breed a certain insecurity. "This is not a path that we chose for ourselves: 'I'm gonna be the best sneaker unboxer,' or 'I'm gonna be the funniest comedian' or 'I'm gonna be the coolest therapist on YouTube,' said Slade. "It's kinda something that we fell into, and now we're trying to make the most of it. ... And if we're gonna keep it totally 100, we get paid outrageous amounts of money to do things that other people [who] work a lot harder don't."

In this article: entertainment, google, internet, longread, youtube, youtubers
All products recommended by Engadget are selected by our editorial team, independent of our parent company. Some of our stories include affiliate links. If you buy something through one of these links, we may earn an affiliate commission.