It's pretty clear what inspired this machine.

We're in a strange new era of personal computing, one where our machines can twist into tablets, weigh just a few pounds, and pack in multiple screens. At CES, things are getting even weirder. Dell just unveiled the Concept UFO, a chunky portable PC with removable gamepads, a la the Switch, and a large 8-inch screen. And yes, you can also dock it to a TV.

The Concept UFO looks like a cross between a Nintendo Switch and a generic PC gamepad: ugly but potentially functional. The left and right controller portions attach to the core screen magnetically, making the connection feel a bit more secure than the Switch's rails. And, as you'd expect, there's an accessory that connects the two pieces of the gamepad for docked play. It's powered by Windows 10, naturally, though Dell built a custom app for simpler game navigation. If anything goes wrong, though, you'll still have to go through the traditional Windows interface to restart the app. 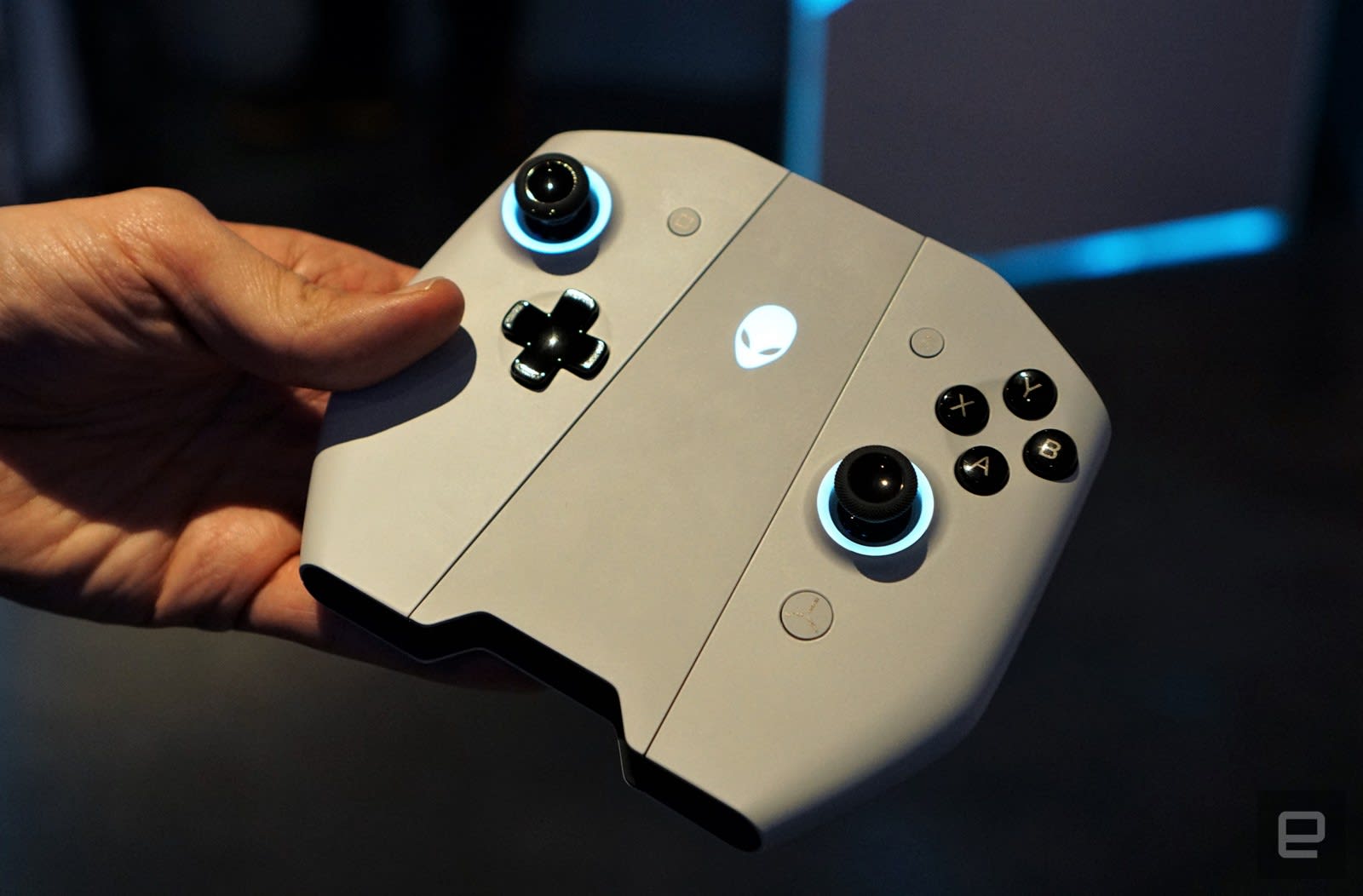 True to its name, Dell isn't planning to release the Concept UFO anytime soon, if at all. Instead, it's something the company has been tinkering with as it explores new form factors. (We also saw its dual-screen Concept Ori and Duet machines at CES.) It's not very refined, with its oversized case and basic-looking controller design. But given the success of the Switch and the steady rise in mobile hardware power, I wouldn't be surprised if someone actually manages to release a handheld portable gaming PC in the next few years. By experimenting with this design now, Dell could be better prepared to deliver that magical device later.

The company wouldn't divulge what's powering the Concept UFO, but in a demo it was able to run F1 Racing in handheld mode decently. (It wasn't quite 60 frames per second, but somewhere above 30 FPS.) As you'd imagine, it's a bulky device. That 8-inch screen and those chunky controllers make it significantly larger and heavier than the Switch. I couldn't see spending much more than 30 minutes playing it handheld.

The controller design could also use some work. The face buttons and analog sticks simply felt off to my console-trained fingers, but maybe I'm just too used to the layout of the Xbox One X and PlayStation 4's gamepads. The triggers are also angled awkwardly -- it feels like you're pressing straight down into the controller, which makes it difficult to press them down rapidly. 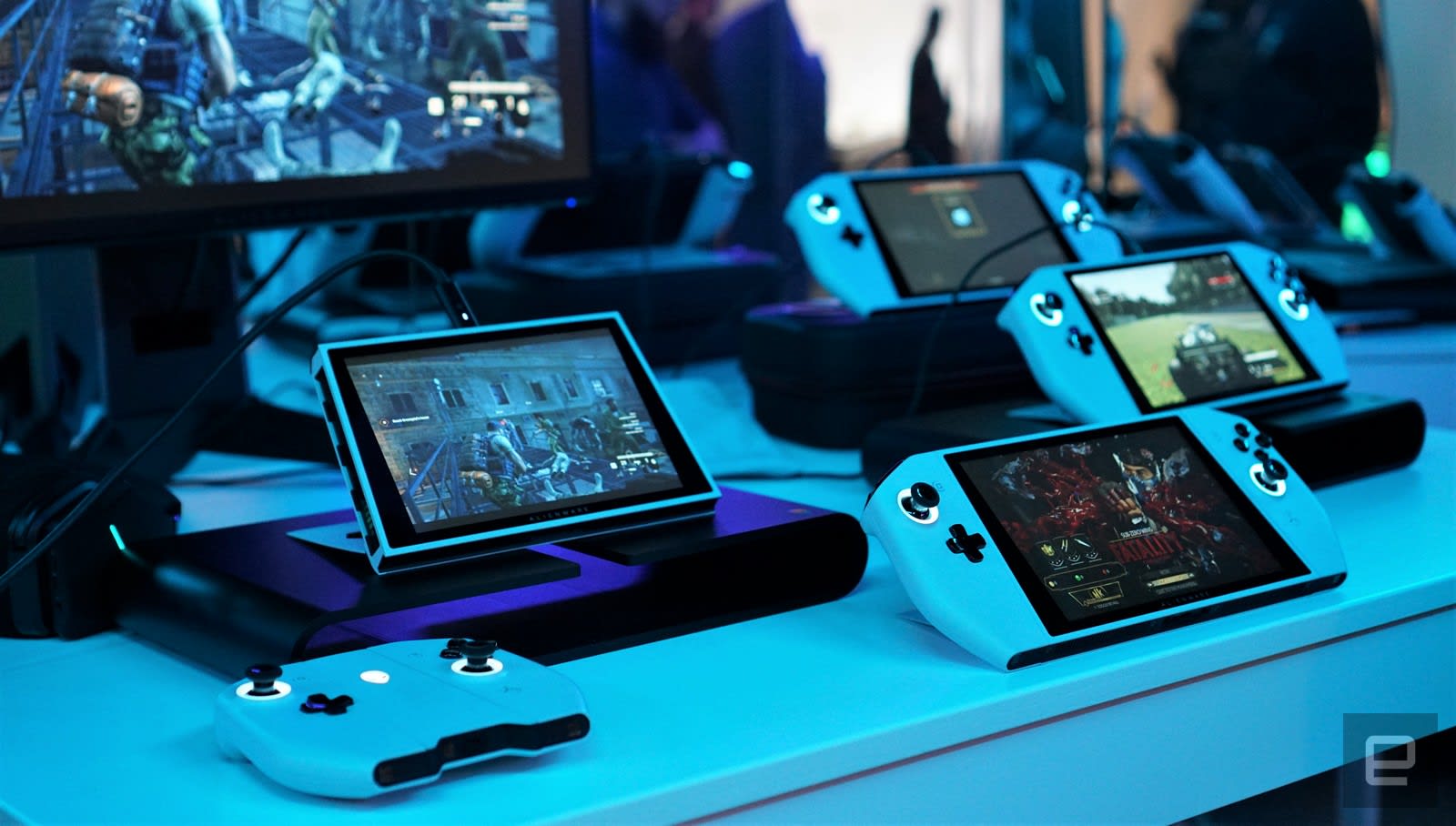 When docked to a TV, the Concept UFO handled World War Z pretty well. It looked like it was close to 60FPS, and its overall performance was smoother than in portable mode. The graphics didn't look very detailed, though, which makes me wonder how much Dell lowered its fidelity settings for the demo. The UFO's clunky controller design also got in the way -- it was almost impossible to shoot repeatedly, since every trigger pull took so much effort.

There's clearly interest in portable gaming PCs: Just look at the hype around the ill-fated PGS handheld. But given the difficulties of designing a functional pocketable PC, there's a better chance you'll see one first from an established player like Dell. While the Concept UFO isn't perfect, it could be the first step toward something truly interesting. I just hope Dell manages to make the final version lighter and more ergonomic, while still keeping its price within reach of console gamers.