Prior to LG's CES 2020 press conference this morning, the company had already revealed a slew of "Real 8K" televisions, and announced that the rollable 4K OLED TV we saw at last year's show will be ready to go on sale later this year. Both of those were present in its demo area, and looked impressive. 8K is sharp on LCD "NanoCell" screens, but the 8K OLED really popped, even if it was only playing demo content and hard to compare directly to what we've seen before from 4K OLED screens. Meanwhile, the rollable screen LG is planning on selling still only rolls one way, and won't have some of the features other new TVs have (like ATSC 3.0 compatibility to receive 4K via antenna) when it finally ships.

Of course, those aren't the only TVs that LG will put on the market in 2020, and now the company is ready to talk about more of the lineup. 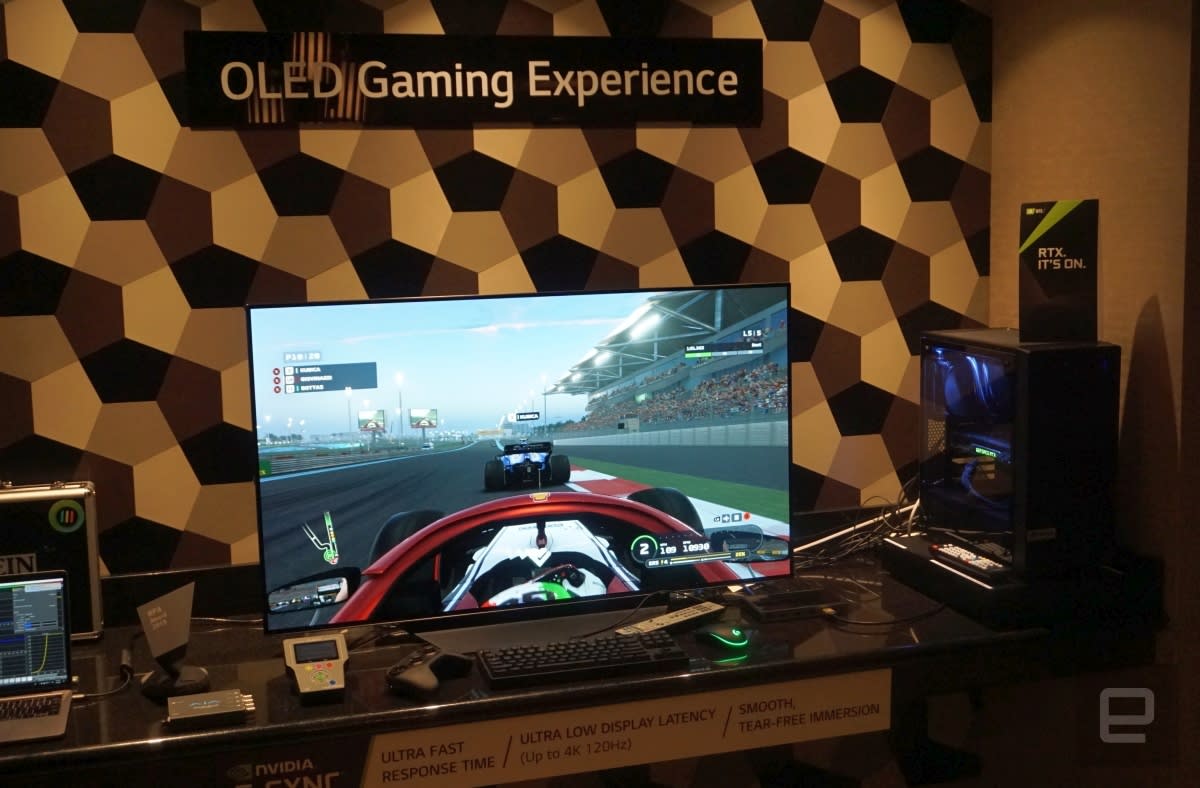 One of the most interesting models in the line is notable because it's small: the new 48-inch 4K OLED shown above demonstrating its chops at PC gaming. If your problem with previous models was that they were too big (or perhaps too expensive), it could be a good way to fix that issue. Plus, with 4K resolution at that size, LG says its pixel density is similar to a 96-inch 8K TV. If you're willing to sit close up, then this is the one for you. 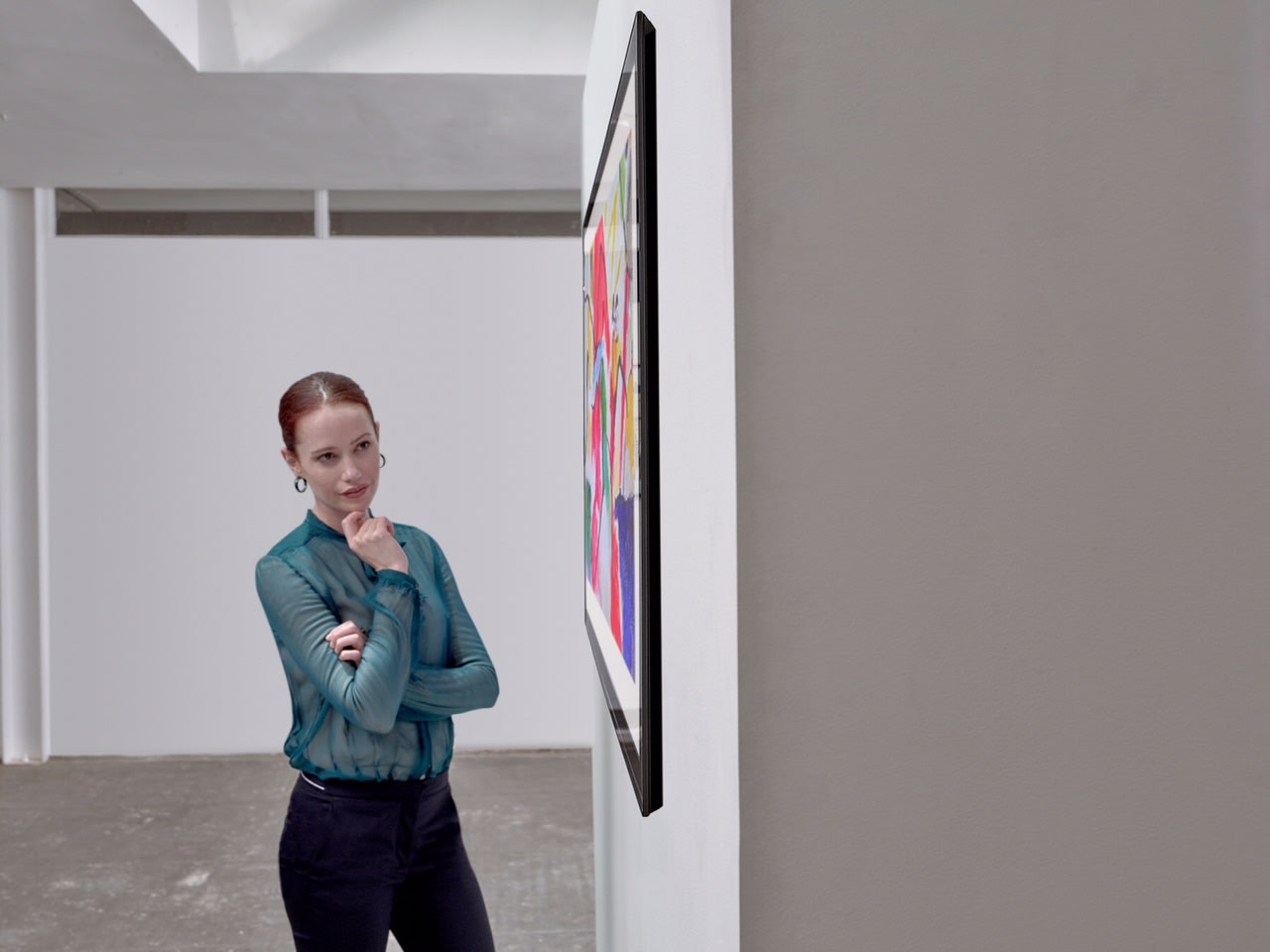 LG is also expanding its lineup with a new GX Gallery Series (above) of screens that provide an alternative to the ultrathin wallpaper OLED TVs it's been selling for a few years. Those paper-thin screens (dubbed "WX" for 2020) shift all of their processing and inputs to an external box that has to sit close, so mounting them can be a bit complicated. The GX model is just 20mm thick, so it can still hang flat on your wall like a picture frame, but without the add-on box. Everything is behind the TV, while a specially designed indent provides space for a wall-mount without leaving any noticeable gap. The GX-Series will be available this year in 55-, 65- and 77-inch versions.

New features for 2020 include Dolby Vision IQ support on the OLED screens, that apparently expands on the already impressive implementation of Dolby Vision HDR by intelligently adjusting settings to take into account the lighting in the room. That way you still get to see things the way they were mastered, whether you're watching in a bright room or a darkened home theater.

LG is also supporting the Filmmaker Mode that was announced last year by the UHD Association, that gives a one-click setting to disable post-processing effects like motion smoothing, noise reduction and sharpening. It can be toggled manually or triggered by an app, or over HDMI, and by default it lowers the brightness even further than the current Cinema setting for the ideal movie viewing environment. 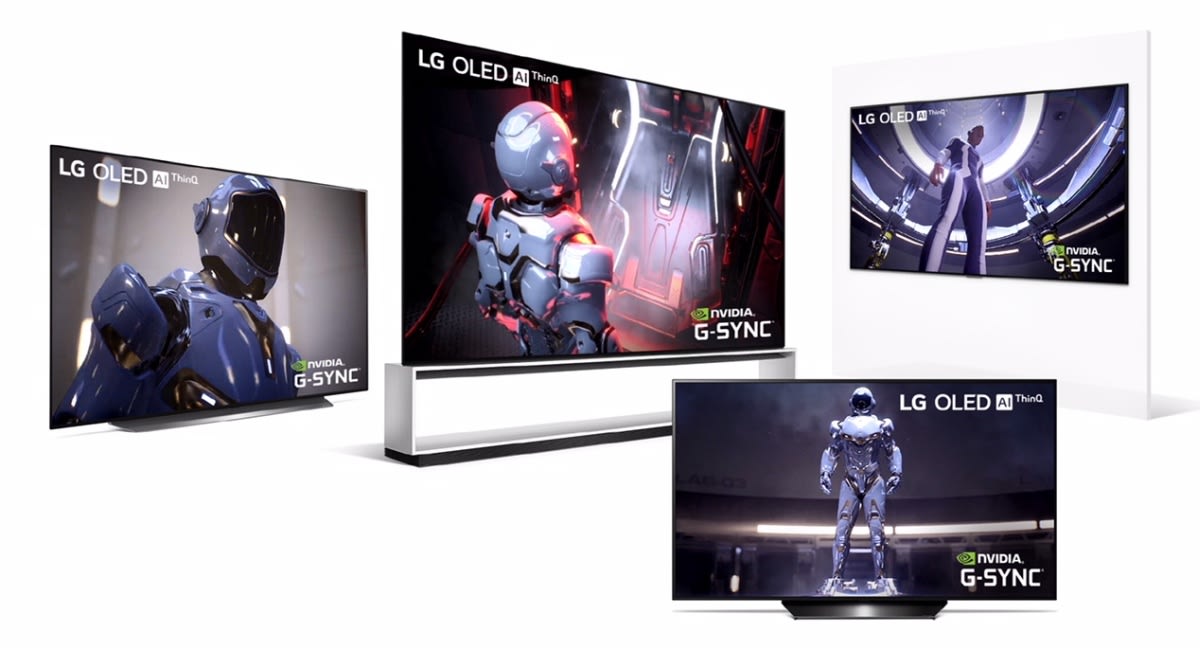 It's expanding NVIDIA G-Sync compatibility for tear-free gaming to 12 OLED models this year, and these TVs are the first one to support HGiG Mode. That one was developed by the HDR Gaming Interest Group, which includes both Microsoft and Sony, and is intended to make sure games are playable across different types of screens using HDR with the experience their creators intended, without accidentally overdoing the effect and ruining gameplay. LG has worked with NVIDIA to support 4K gaming at 120Hz, and is including HDMI overrides that will allow access to features that PC gaming cards might not be able to toggle on with their HDMI 2.0 outputs.

The webOS UI will get some updates for 2020 as well. In January an Apple TV app will be available for models going back to 2018 with support for Apple TV+, Apple TV Channels and access to users' iTunes libraries of movies and TV shows. Also, the TVs offer "sports alerts" that follow your favorite teams and pop up when they're playing, ready to switch on the proper input and channel with one click. A new subsection in the webOS menu is made to manage smart home devices, and the AI-powered search can analyze a scene to pull up information about the place or people shown.