Intel's Horseshoe Bend prototype is the biggest foldable tablet yet

Bigger is better sometimes, but it comes with more issues.

Foldables were big in 2019, and it looks like they're only going to get bigger in 2020. We've seen folding phones and even tablets, with Dell and Lenovo showing off their slates with bendy screens here at CES 2020. But the trend is about to get literally larger, with Intel showing off a new 17-inch foldable tablet prototype called Horseshoe Bend. It builds on the company's former prototypes like Tiger Rapids and Twin Rivers, but is meant to help Intel and its partners figure out how to make a large foldable work.

As with Intel's previous prototypes, this isn't something the company is planning on selling to consumers. It's more of an experiment to see what's possible with such new styles of machinery and to figure out what might need refining.

The biggest challenges with Horseshoe Bend was working out how to make a folding screen of this size without breaking, as well as how to get a powerful processor inside with an adequate battery to keep it running all day. The prototype uses an Intel Tiger Lake UP4 processor to power its 17.3-inch screen, though Intel did not share how long it was rated to last.

What we did get to check out were some software demos. I browsed a mock travel blog on the Horseshoe Bend, and when it was bent and set up in vertical orientation, I was able to scroll along just the bottom screen while watching a video on the upper half. Tapping on a cell in an Excel spreadsheet pulled up a roomy onscreen keyboard for quick (but tricky) data entry, and the machine was surprisingly responsive; I jumped around the Windows 10 Start menu and desktop interface with ease. 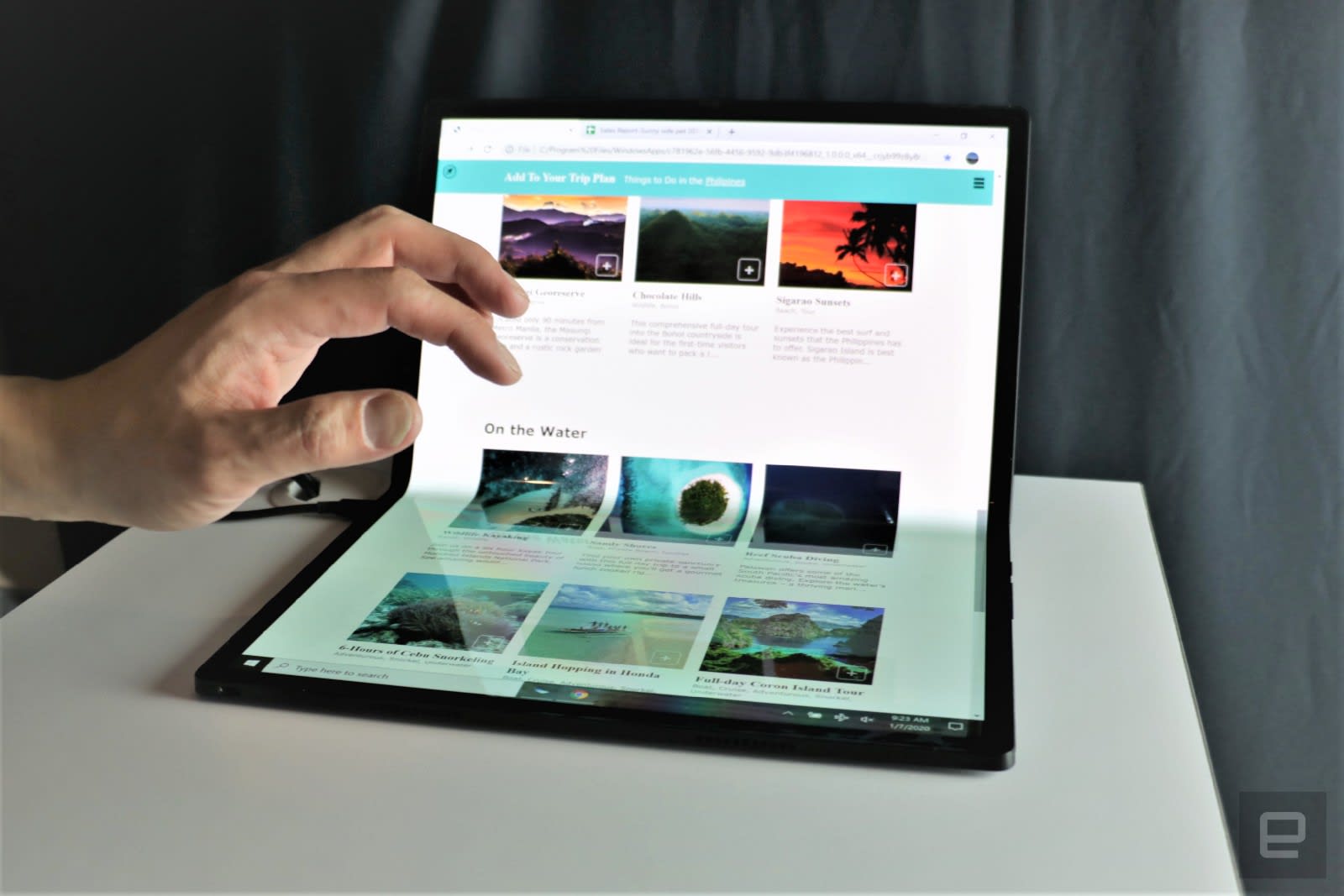 It did feel warm to the touch, although that's understandable considering it had been plugged in to a charger all morning. Since Microsoft's Windows 10 X software still isn't available, Intel was running mostly canned demos.

Compared to Lenovo's just-announced ThinkPad X1 Fold, the Horseshoe Bend prototype actually feels slightly more luxurious thanks to the exposed matte metallic finish on its edges. Intel's concept has a similar articulating hinge to the ThinkPad, as well as a leather cover, making it feel almost like a textbook. It has a thinner profile and slimmer bezels, but was heavier than Lenovo's PC. Intel also integrated a kickstand that props the tablet up so you can use it like an all-in-one, something the ThinkPad X1 Fold also offers.

Though there's not much actual specs we can glean from this hands-on, it does at least show us that bigger foldable tablets are coming and that Intel and its partners are looking into ways to make these devices practical. I wouldn't be surprised if we see them get bigger, thinner and longer-lasting soon enough.

All products recommended by Engadget are selected by our editorial team, independent of our parent company. Some of our stories include affiliate links. If you buy something through one of these links, we may earn an affiliate commission. All prices are correct at the time of publishing.
View All Comments
Intel's Horseshoe Bend prototype is the biggest foldable tablet yet