Devices like this will be here sooner than you think.

Intel surprised us last Computex with unique dual-screen prototypes like its Tiger Rapids device with an e-ink screen. This year, the company had even more concepts to show off at its technology open house. It showcased laptops from its Project Athena program and an intriguing Honeycomb Glacier idea that envisions different ways to make powerful laptops with integrated companion screens. Intel also gave us a glimpse at its new dual-screen prototype called Twin Rivers, demonstrating how its eighth-generation (and newer) processors are able to power such a resource-demanding device. As I played around with this prototype and Intel's other experiments, one thing became clear: The future of PCs is incredibly exciting.

The Twin Rivers prototype, in particular, is the second dual-screen concept device we've seen from Intel, so it makes sense that overall the machine feels more mature. That's not to say it's smooth and bug-free -- the unit we saw still sometimes stalled and refused to cooperate. But it felt more refined, with beautiful screens and a finished build that made it feel like something I might find on a store shelf. Although to be painfully clear, you won't; this is just a prototype and not something Intel is actively manufacturing.

The vibrant displays are important, of course, since they're basically the main part of Twin Rivers. Instead of simply showing off dual-screen laptop concepts like last year's Project Precog from ASUS and the Yoga Book from Lenovo, this year Intel made a 2-in-1 that feels more mobile and book-like. The prototype packs two 12.3-inch screens running at 1,920 x 1,280, with 3:2 aspect ratios. (Don't yawn just yet, I'll get to the importance of this later.)

Like most other hybrid laptops, this 2-in-1 can be set up in several configurations. You can even prop the device up in tent mode to share a presentation with people sitting across you. Technically, you could do this with the ZTE Axon M and other dual-screen phones, the idea being that since you can see the same content on both sides of your device, you could follow cues and notes while showing your audience a finished slide. Of course, this makes much more sense on laptop screens. 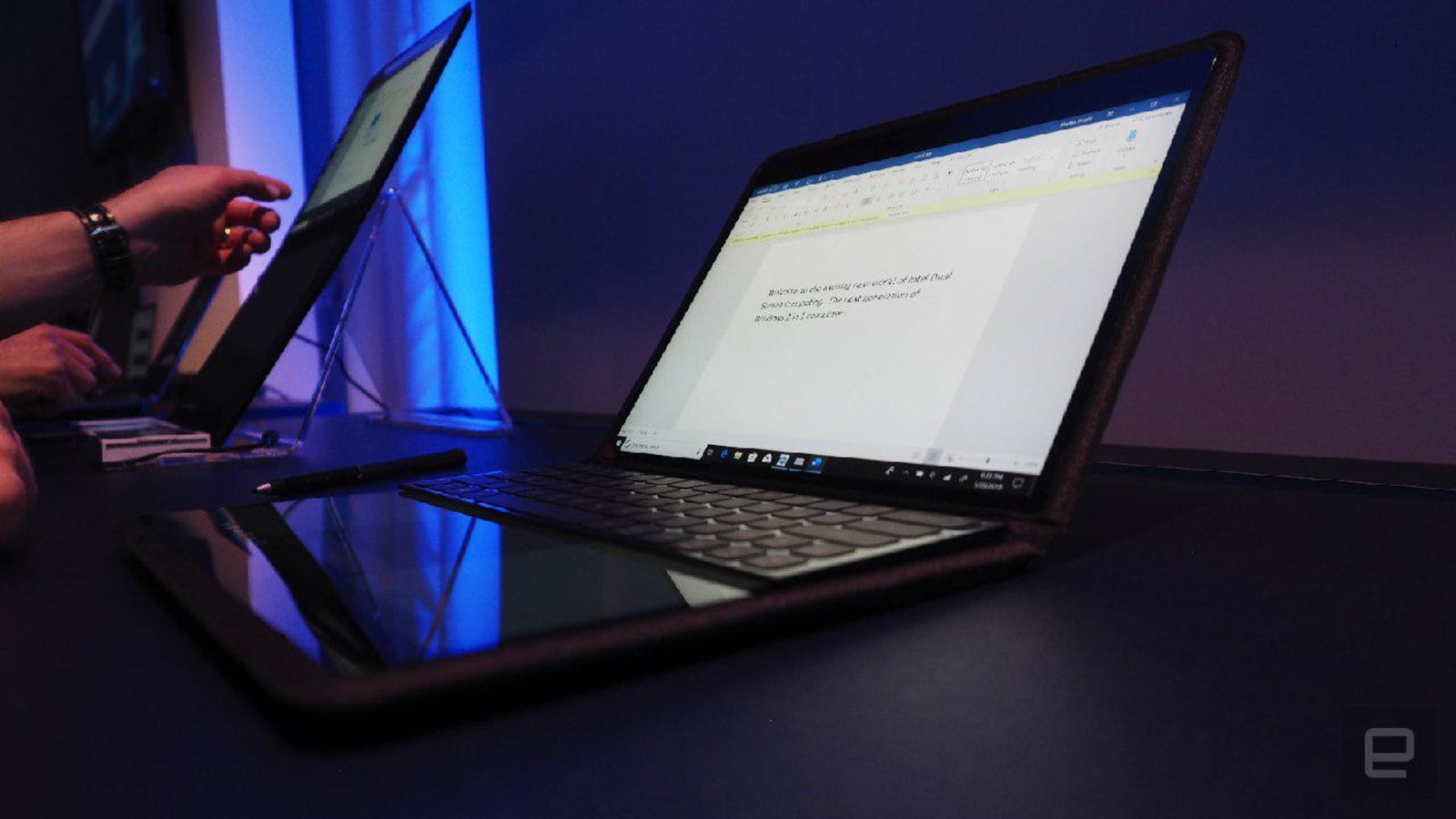 You can also set up the Twin Rivers device in laptop mode. In this configuration, you can either connect a wireless keyboard to type up your hypothetical essays or use a tweaked version of the Windows onscreen keyboard to fire off a quick email or tweet. Intel had to adapt the software here to optimize the virtual keyboard for the bottom screen, and it also added a trackpad to the layout so you can intuitively control the cursor on the top display. As much as I loathe typing with digital keyboards, I thought the addition of the trackpad was a nice touch.

Intel was also thoughtful about the wireless keyboard it created to accompany the Twin Rivers prototype. It was a really thin Bluetooth accessory that can sit on top of the bottom screen and when you shut the 2-in-1 with the physical keyboard inside, it doesn't fall out. That's neat, though I do wish the keys had a bit more travel, but this is a prototype afterall so I won't ding it too much.

The whole package is neatly wrapped up in fabric that makes the device feel like it has a book cover. In fact, the 2-in-1 also behaves like a book when you lift and rotate it so that the screens are in portrait orientation. 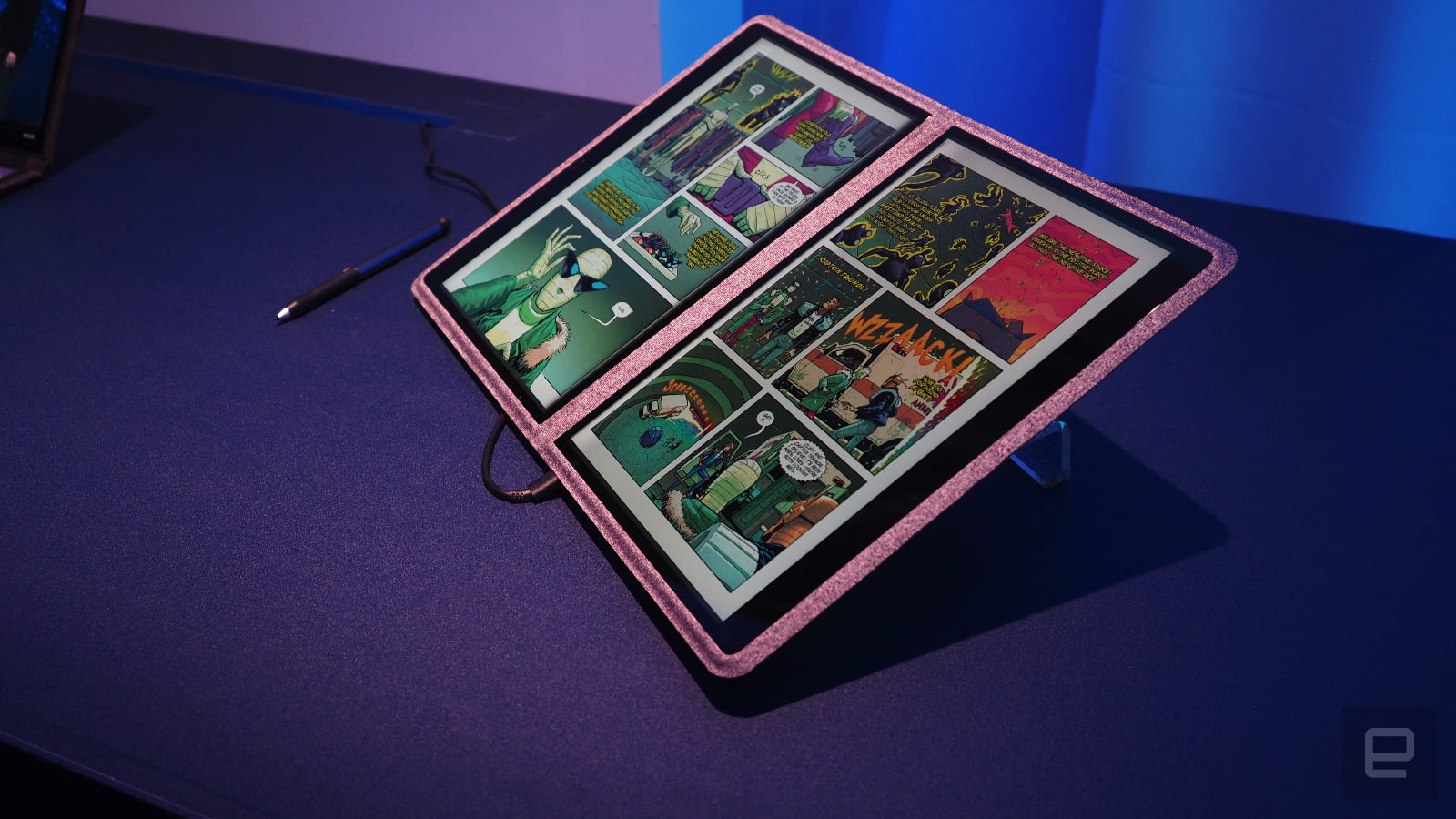 Intel showed off a comic book reader and a recipe app in this mode, and as I swiped my finger across the screen on the right, the graphic novel flipped to the next page. These weren't full-fledged apps by any means, but Intel made these up in an effort to inspire developers to create programs that made full use of the new dual-screen canvas. The company's reps also added that the fabric covering helps keep the machine cool, which is important since it's a fanless design and powering two whole screens can get quite hot. The unit I saw was warm to the touch, though I felt that was reasonable considering it had been plugged in and running intensive demos for hours.

What I'm most worried about here is power. With a relatively small body but two whole displays to run, Intel needs to find means to either seriously cut down battery consumption or boost capacity. The company says it's targeting that issue in three main ways.

First, it uses a feature called Dynamic Tuning to allocate resources to the system. It can determine, based on what you're doing, whether it should prioritize performance or save power. For instance, if you're simply using a chat app or working on a Word document, the system can use less power-intensive components, firing up the more resource-hungry parts (like the GPU) only when you need them.

Then, there's sheer capacity. The company's reps said that being able to use both sides of the Twin Rivers' chassis to house components allowed them to squeeze in larger battery cells than they otherwise could have. Bigger battery, more power.

Finally, Intel has been working on screens that simply need less energy. It unveiled low-power displays last year that can run off just one watt. But, and this is why the screen specs I mentioned earlier are of note, Intel doesn't yet have low power displays in this size and aspect ratio. So the Twin Rivers prototype isn't using the low power LCDs. Ultimately, though, manufacturers could make their dual-screen devices with these energy-saving screens to get longer battery life. 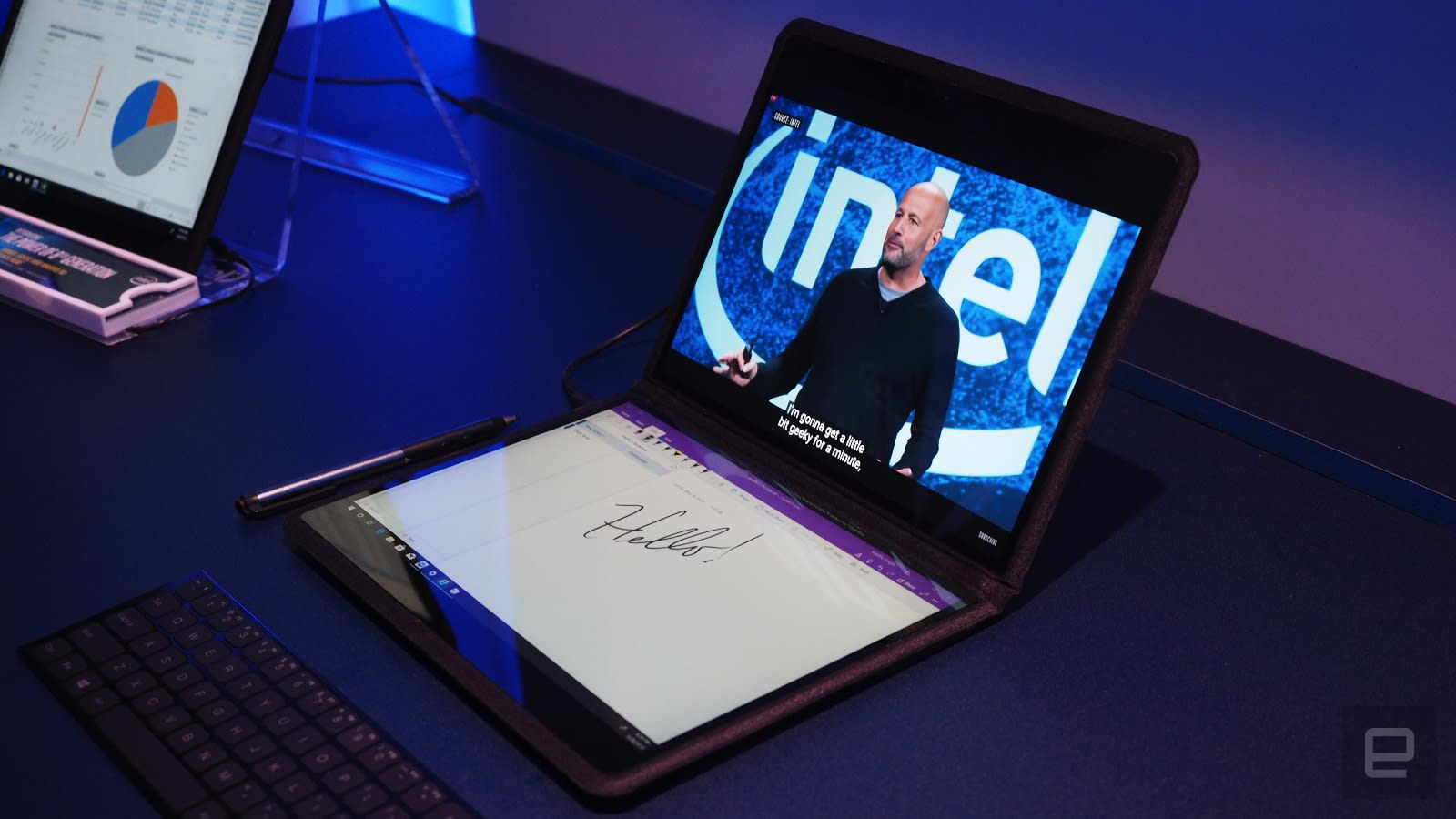 Behind the prototype's top display is an eighth-generation Core i chip that isn't available outside of Intel. The actual specs of this device aren't that important -- you're not going to be able to buy this exact thing, anyway. Regardless, there was a webcam up top and a USB-C port that was being used to keep the device charged. Intel also said one of the units had a built-in LTE modem. The Twin Rivers prototype isn't the thinnest laptop around, and frankly, it was a bit heavy. I expect PC makers will be able to shave off millimeters and pounds when they make their own versions.

Although this device is just a concept for now, it's an exciting portent of PC things to come. The fact that Lenovo's Yoga Book (2nd gen) was released so quickly after we saw last year's Tiger Rapids prototype, and that we already have the ASUS ZenBook Pro Duo, makes me optimistic that these aren't just random experiments that are going nowhere. PC makers are creating such devices, and we're likely to see them very soon. Clearly, the laptop industry is about to get seriously shaken up.