Computex 2018 has been full of surprises. In addition to the usual array of processor news, updated laptops and fresh gaming hardware, we saw companies like ASUS and Lenovo show off intriguing dual-screen devices as well. Both those companies worked with Intel on their products -- Project Precog and the next-generation Yoga Book respectively, but the chip maker had its own concept to show off too. At its open house here in Taipei, Intel shared demos of a 7.9-inch dual-screen PC codenamed Tiger Rapids, and I'm having trouble hiding my enthusiasm.

The device has a full HD LCD display on one side, and an E Ink screen on the other, and both are powered by a single eighth-generation Core processor. Intel's rep told Engadget that this prototype uses an early version of the Kaby Lake Y chip, and that Tiger Rapids has been in development since 2016. The company developed the convertible as a way to show its device manufacturer partners how to implement technologies like inking on an e-paper display, as well as explore ways to make the writing experience feel more realistic.

Indeed, as I scrawled on the black-and-white screen with the Intel-made active stylus, I was impressed by how smooth the surface felt. There wasn't too much resistance as I dragged the pen across the screen, and though there was a noticeable lag between when I wrote something and when it showed up, the delay was slight and didn't bother me much. After all, this is a prototype that isn't meant for consumers.

The E Ink screen can also double as a keyboard with an area for typing below it. Here, Tiger Rapids struggled, and I had to wait a second or so for letters to show up on the LCD screen after I pressed them. It was slightly finicky at recognizing my scrawls too, thinking I had written "Does this odor" instead of "Does this do OCR." Granted, I have terrible handwriting and the system is, once again, just a prototype, so I'm not going to complain. 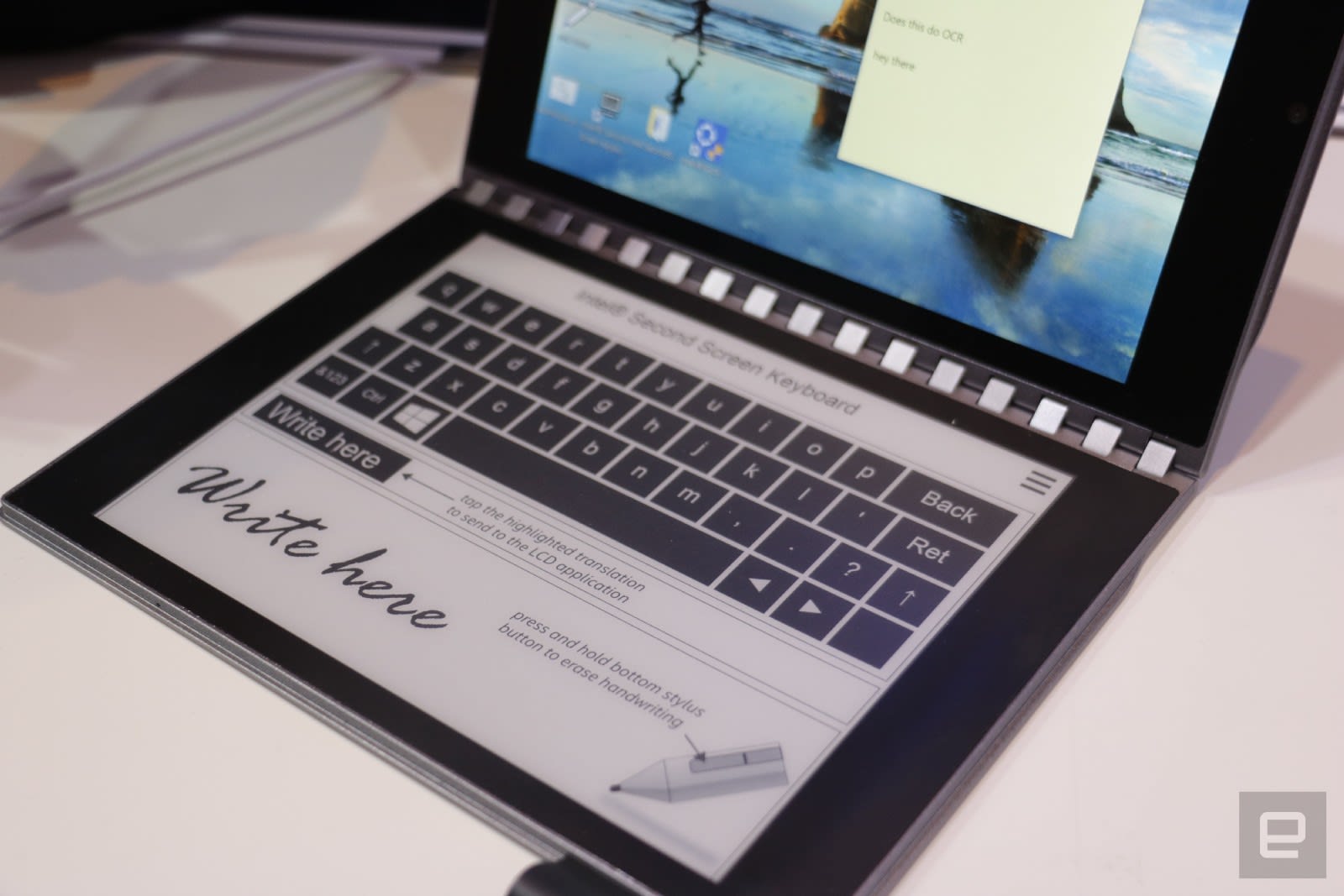 What I liked the most about this concept device is its thin and light design. It's like a little book that fits nicely in my hand and is very easy to handle. I can't imagine you can get much actual work done on this thing, given its size and lack of a proper keyboard, but it's something I'd stuff in my purse for a commute or a long-haul flight. With its 12-wHr battery, the Tiger Rapids can last an estimated 7 to 8 hours, and charges back up via the single USB-C port on its edge.

But really, all those specs and performance issues don't matter. This device is not what ultimately will make its way to the public. Intel's partners ASUS and Lenovo are working on similar products we'll actually be able to buy, and this is a tantalizing preview. In fact, the hinge design on the prototype is very reminiscent of Lenovo's "watchband" hinge on its Yoga products. The entire dual-screen concept is similar to Lenovo's original Yoga Book -- a 2-in-1 that features a touch-sensitive panel in place of a keyboard.

We'll probably hear more about the next iteration of the Yoga Book later this year, as the company promised during Intel's keynote. Until then, I'm stoked to see dual-screen PCs take off as a concept, and am intrigued by the premise. I have concerns about the battery and CPU power required to smoothly run such systems, but for now my excitement at seeing something different in a stagnant industry is keeping those concerns at bay. Meanwhile, I'm just waiting for the day I can buy something just like this Tiger Rapids prototype, so hey Lenovo and ASUS: Hurry up already!