It's going to be a big gaming year for Intel.

The year 2020 is clearly going to be big for Intel's gaming presence. The chipmaker is gearing up to introduce its first dedicated graphics hardware, dubbed Intel Xe. But at CES it also made some surprising announcements, like its new NUC Ghost Canyon that can fit desktop graphics cards as well as the fact that it's breaking the 5GHz barrier with upcoming H-series 10th gen chips. For gamers, this all means one thing: It's going to be a very interesting year.

All of Intel's next unit of computing (NUC) devices have been relatively small DIY kits for enthusiasts. They ship with a CPU, but it's up to you to provide RAM, storage and an OS. I was intrigued by its more gaming-oriented Hades Canyon NUC from from a few years ago, which featured Intel's short-lived collaboration with AMD to bring Radeon graphics to a core CPU. But with Ghost Canyon (officially called the NUC 9 Extreme), it's going bigger to pack in even more power. It can hold a desktop GPU up to eight inches long, which means you can plug in a NVIDIA RTX 2070 card for some serious gaming.

While it's a bit disheartening to see the NUC line get even bigger, the NUC 9 Extreme is still much smaller than any other tiny desktop out there, with a volume of 30 liters. It's also a bit more upgradable than previous NUC kits: Intel has developed a compute unit that holds the system's CPU, which you can swap out for a newer kit down the line. Even better, you could also take a compute unit and move it over to another Ghost Canyon kit from a third party, like Razer's Tomahawk. Intel is clearly trying to build a tiny desktop ecosystem, which may end up making the NUC 9 Extreme more influential than any of its siblings.

On the laptop front, Intel gave us a glimpse at some of its upcoming hardware: that new H-series 10th-generation chip and its next-generation Tiger Lake platform with Xe dedicated graphics. I was able to play Star Wars Jedi: Fallen Order on an upcoming system with the H-series processor (and an unnamed third-party GPU), and the experience felt smooth. Of course, the GPU was doing the heavy lifting there, but it's nice to see that Intel's high-performance 10th-gen mobile chip actually exists. (Unfortunately, I couldn't actually test it to see if it was going beyond 5GHz.) 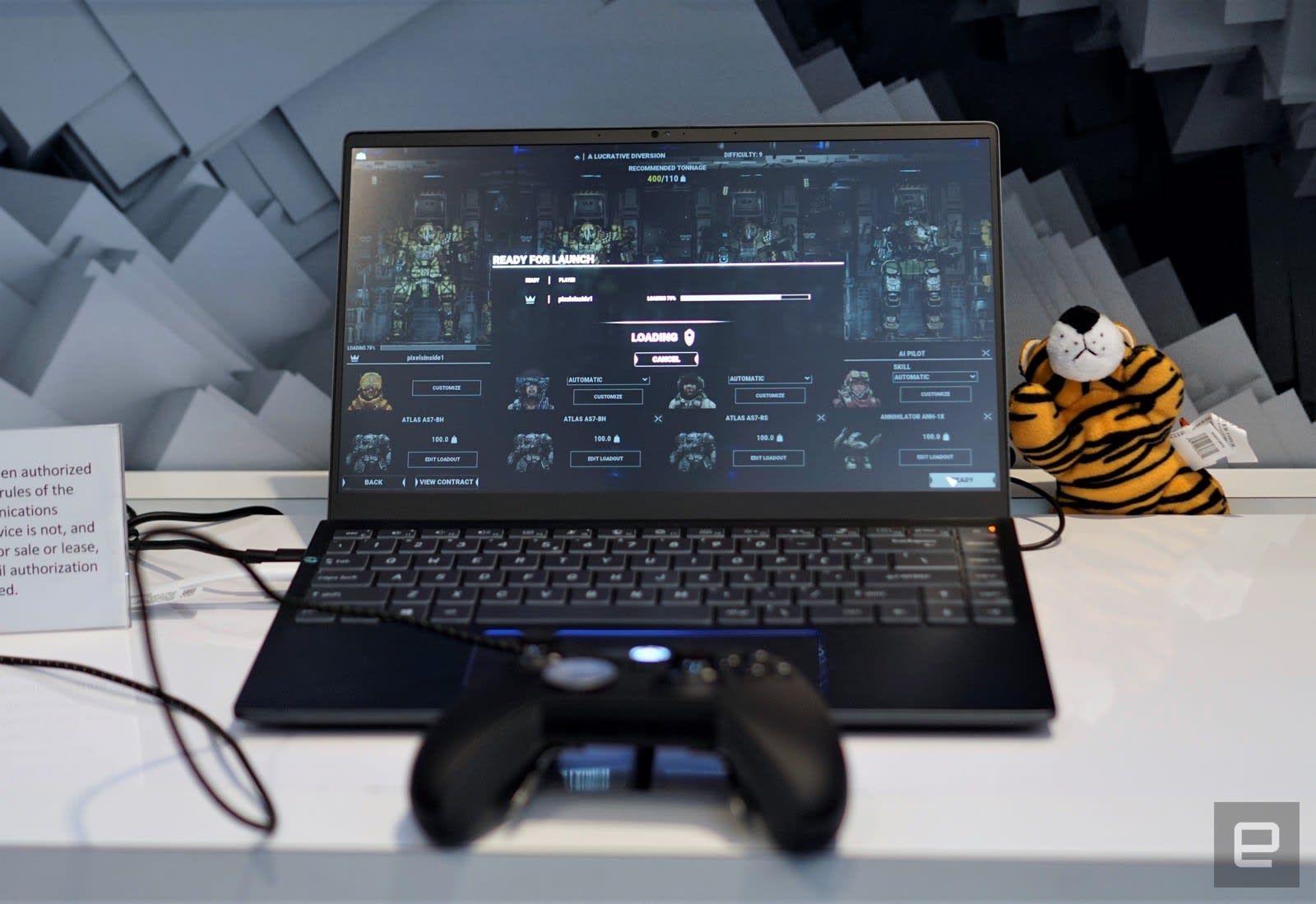 While we were impressed with Intel's 10th-gen Iris Plus integrated graphics, which made games like Overwatch very playable on ultraportables, the company is making another significant leap forward with Tiger Lake. I demoed two systems running the new platform, an ultraportable and a slightly chunkier midrange laptop, and they both performed surprisingly well. The unbranded ultraportable, which looked like the vast majority of thin and light systems we see today, was able to run MechWarrior 5 in 1080p with low graphics settings. It wasn't exactly silky smooth, but it generally felt around 30 fps, which was playable enough for such a tiny system.

The midrange Tiger Lake machine, meanwhile, managed to run Destiny 2 decently in 1080p. The game felt a bit sluggish, and there was a bit of a delay between mouse movements and shooting, but the machine handled realistic shadows surprisingly well. Again, it didn't feel like a gaming machine, but it was playable enough for a mainstream laptop. At the least, Intel's Xe graphics puts it in a better spot to compete with AMD, which is planning a bigger push for Radeon mobile graphics this year.

Intel hasn't given us many details about these upcoming products, but we expect to hear more soon. You'll probably have to pay a pretty penny for the NUC 9 Extreme: One Intel rep said the high-end Core i9 kit might sell for around $2,700. As for the new laptop tech, you'll likely see the H-series 10th-gen chip before Tiger Lake.