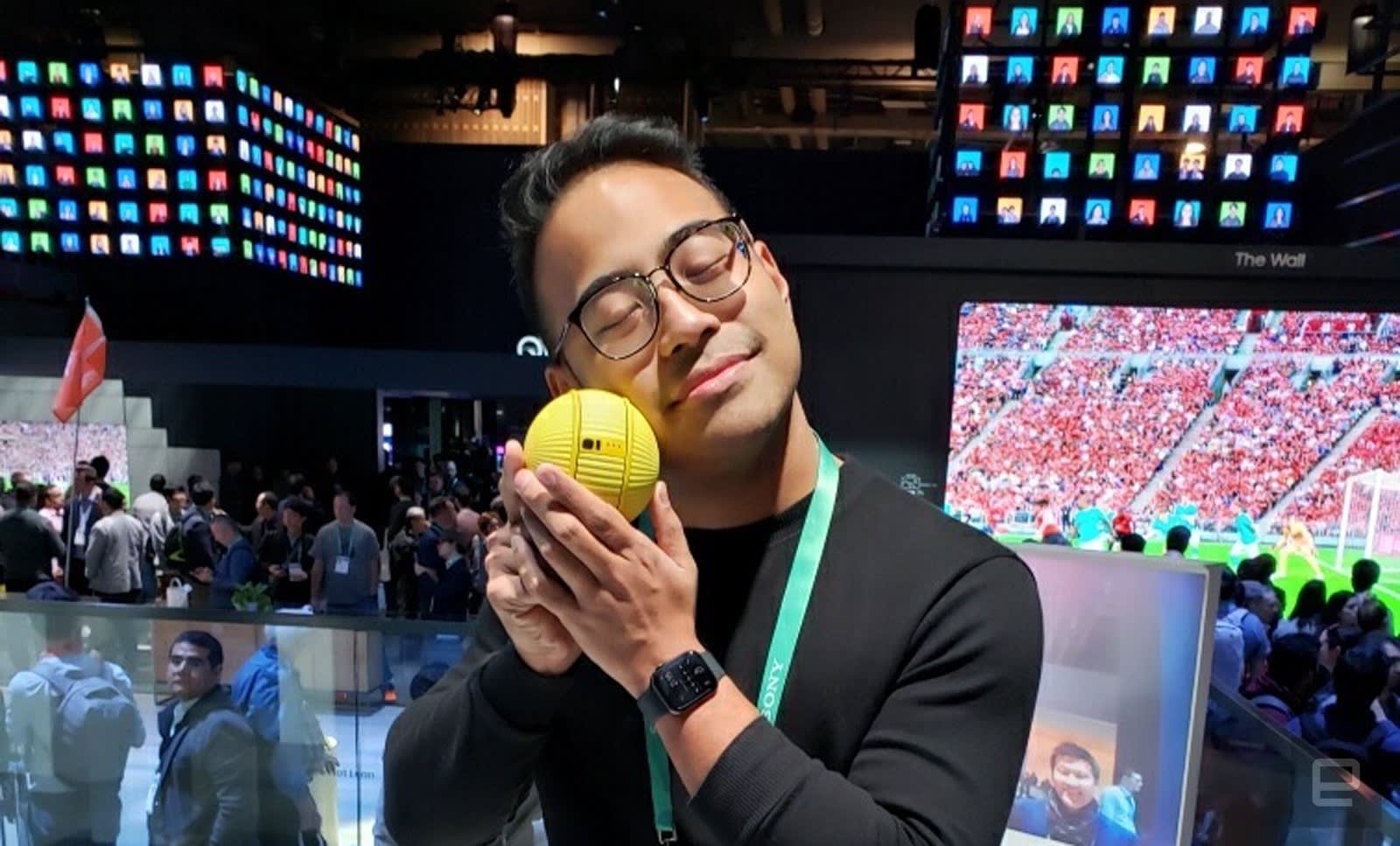 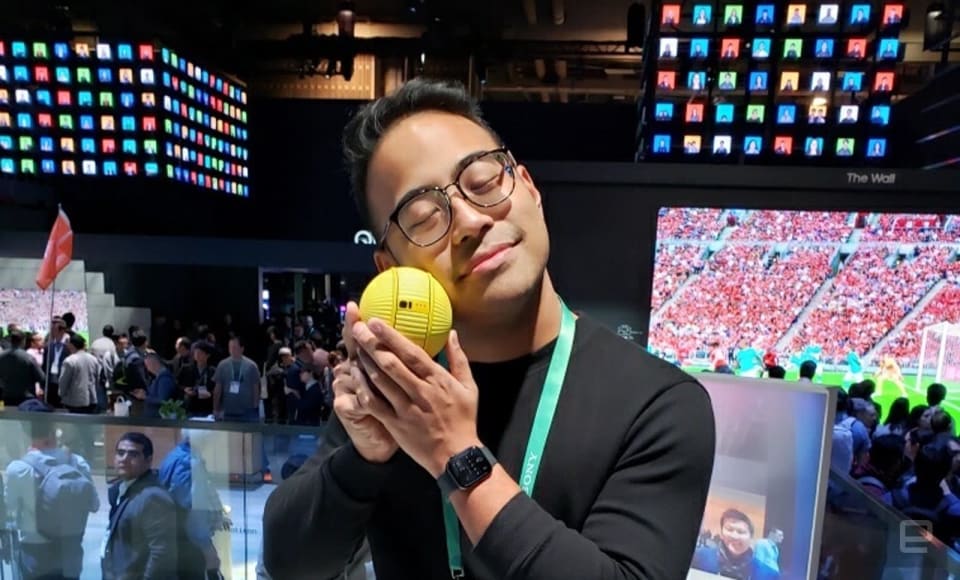 The first thing I notice when I pick up Ballie is how light it is: It's about the size of a hefty grapefruit but much less dense. Ballie's plastic, scalloped frame gives this otherwise nondescript ball a sense of playfulness, one that might not have been possible if Samsung had gone with the cloth finish it first considered.

I'm told I'm the only non-Samsung staffer to hold Ballie at CES apart from the mayor of Seoul, though I'm not sure if that's true or just PR bluster. Anyway, it doesn't matter: Ballie may well represent the future of Samsung's home-robot strategy, and it's only here because a dozen members of the company's Think Tank Team (TTT) carefully crafted the prototype you might have seen rolling around onstage during a keynote address.

As I noted in an earlier story, Samsung has been pretty reticent to offer specific details. We still don't know whether the company is making concrete plans to bring Ballie to market or how much it could cost if and when that happens. But TTT director Leo Jun filled in a few gaps for us.

"This is our first step into personal home robots," Jun told me. "It's not just a social robot. It's actually designed to be a companion, and it's a little bit different in its interpretation, but we think this is very believable."

Samsung is no stranger to trotting out robots at big trade shows: Just last year, it revealed a trio of service-oriented Bots at CES designed to help manage people's health care routines, guide customers through stores and, uh, purify air. Those were among Samsung's first attempts at truly "personal" robots, and you can see how the company tried to give them personalities through humanlike characteristics: They had big, blinking eyes rendered on round screens, and two of them had "heads" that swiveled around to look at people and objects. Think Eve from Wall-E and you're on the right track.

Ballie is different. It is in no way humanlike, and for Samsung, devising a way to make a robot ball look and feel like something you'd want to talk to was no small feat. As I mentioned, the original plan was to use a cloth-covered body; that idea was shelved at least partially because the company realized it might not hold up to certain members of the family.

"You should train your dog not to bite into it all the time," Jun said. Still, the scalloped design TTT landed on should "withstand some of those scrapes and bumps."

Since TTT couldn't very well squeeze a face onto a ball running around at ground level, it also agonized over what Ballie should sound like. In Samsung's CES keynote demo video, it can be heard making adorable chirpy sounds as it zips around a magnificently expensive-looking home and interacts with its inhabitants. Jun couldn't confirm that those were the exact cutesy sounds a final Ballie would make, but the team landed on a philosophy it's pleased with.

"We were very, very specific not to make it robot-y," Jun said. "Even the sound UI we designed were from very acoustic, round instruments like a hang drum. We layered that with a little processing and included a little robot-y sound at the end to remind people this is a robot, but not the kind of robot you were expecting."

It's decisions like this, rather than practical ones about locomotion or power management, that could have the most impact on how this robot is received. To some extent, Jun concedes that functionality in a product like this is less important than feel.

"It's not about the physical object being there to trigger IoT devices. It doesn't need to be there. It doesn't even need to turn and make sounds and stuff, but it's for the user. It's a very natural interface in front of you, and there's an important immediacy to that."

For a concept prototype, Ballie physically feels nearly ready for production. It rolls around with surprising surety on those two rim-like wheels, and honestly, I've handled full, commercial Samsung products that didn't feel as convincing. Obviously a lot of work needs to happen between the end of CES and a potential launch.

For one, Samsung has to finalize Ballie's hardware. The company is understandably hesitant to talk details, but we know a few things, like the fact that Ballie doesn't use one of Samsung's homemade Exynos chipsets as a brain. It uses a single camera for object and person detection, but it handles all the image processing directly on the device and apparently lacks the ability to record and store footage of its surroundings entirely. (Whether that's enough to assuage people's privacy concerns remains to be seen.)

Perhaps the bigger issue here is that Samsung needs to sort out Ballie's software. Jun confirmed that just about all the things Ballie could be seen doing in Samsung's keynote video -- rolling around stably, interacting with smart home gadgetry, recognizing the human form, recognizing some voice commands -- are more or less possible right now, "but not at the level you're thinking from a commercial perspective." What it doesn't do, for now anyway, is interact with existing Samsung AI efforts like Bixby at all.

"We were thinking it needs to be flexible. It could be modular, it could come in different combinations. Maybe it's Bixby. Maybe it's something else."

Considering how little a role Bixby played when Samsung CEO HS Kim laid out his vision for the "Age of Experience," I can't say I was surprised that it's currently absent from Ballie. (For those keeping count, the Bixby logo appeared on-screen for just a few moments during the keynote and was barely mentioned by name.)

For now, jumping to conclusions about... well, anything related to Ballie would be shortsighted. Samsung seems pretty enthusiastic about the concept, and its approach here -- even in these early days -- feels easier to embrace than what we saw last year. It might take years for Ballie to become a real product, but even if it doesn't, Samsung deserves some credit for making a machine that people have started to swoon over.

In this article: ballie, ces2020, gear, hands on, hands-on, interview, personal robots, robots, samsung
All products recommended by Engadget are selected by our editorial team, independent of our parent company. Some of our stories include affiliate links. If you buy something through one of these links, we may earn an affiliate commission.