Sony added buttons to its DualShock 4 and little else.

Sony's DualShock is a good controller. Its Emmy award-winning design has hardly changed over the last couple of decades. It had a run of minor refinements until the DualShock 4 added a touchpanel, some fancy lights and a grippier texture. But things have moved on. PlayStation's biggest rival, Xbox, has a high-end controller for top-level gamers, while expensive third-party options from SCUFF and Hori have proved there are better ways to play PS4.

Enter the unimaginatively named Back Button Attachment, aimed at giving your six-year-old DualShock 4 a few new tricks. But just a few.

The accessory is a $30 addition to your existing controller, which circles impulse-buy territory. But what does this peripheral's peripheral do?

It plugs into the DualShock 4 through the 3.5mm headphone port -- there's a headphone port on the back button attachment, so it'll still work with headsets and PSVR -- and works straight off the bat.

The integrated OLED screen sounds more spectacular than it is -- just a monochrome read-out where you can tell which buttons are mapped. Press down on it to light up current settings, press it again to cycle to the next button profile (you can have up to three) and long-press it to reassign keys.

Why include an OLED display on this thing as it tries to catch up with SCUF controllers or the Xbox's well-regarded, but expensive, Elite controller? There's some method to the madness. The inclusion means that the DualShock 4 (plus peripheral) works with anything it's already compatible with, whether that's a PC or an Android phone. All the 'menus' are there, built-in. That said, I'm not sure why Sony didn't just put it on the front. Yeah, you won't need to look at it much, but you will need to look at it at some point. 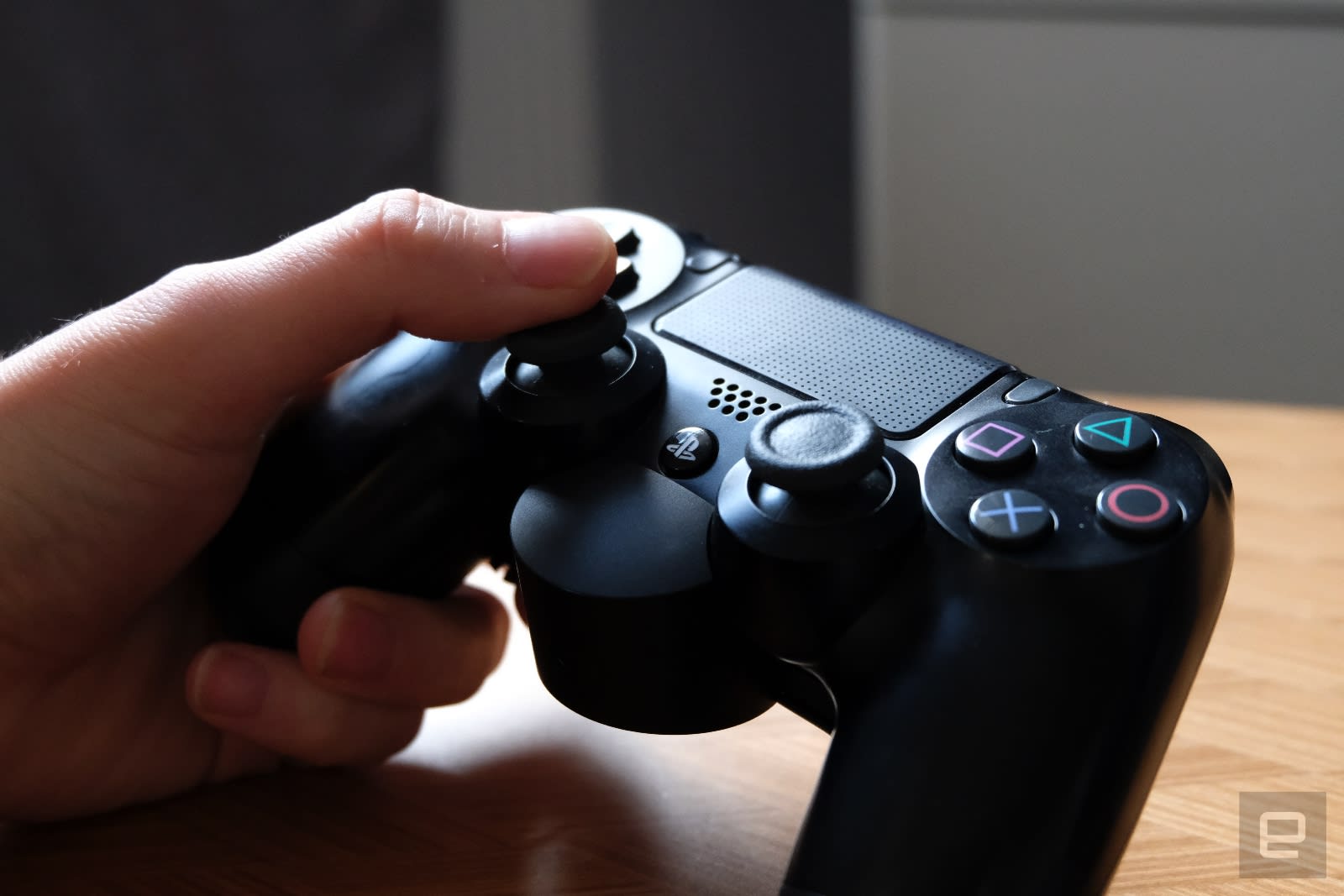 The triggers themselves are sensitive, with very shallow travel. They feel far more premium than my existing DS4 controller's L1 / R1 keys, which didn't take much beating. Now, is this what we can expect from the PlayStation 5's next-gen controller? Sony has already promised haptic feedback on trigger buttons -- something that would point to more elaborate trigger keys. And if this is how they're going to feel, I'm excited about it. Sony can probably ditch the hulking OLED readout, though. There are more elegant solutions, I'm sure, for the DualShock 5.

So which buttons are you going to remap? For a lot of you, it'll be the L3 and R3, AKA the worst buttons. Pushing down on an analogue stick in a pinch has been a recipe for disaster, leading to melee attacks when you meant to sprint, and often imminent death when you make a mistake. In a lot of games, holding L3 down has become the defacto sprint button.

Games that demand both quick reflexes and combined inputs benefit most from the new peripheral. In Overwatch, a more sensitive trigger finger is a welcome addition, but I found that when using both the two pairs of L and R buttons, in addition to the new triggers, my fingers would overlap. It's a little cramped at times.

Another game that benefits from some button flexibility is Sekiro. Not only can I move without being dependent on the lock-on view, but I can jump and dodge without any finger traffic jams. It's why a passionate group of gamers swear by Steam's controller. RIP.

With any kind of controller change from stock, I want more customization. The best thing about third-party controllers has often been the addition of turbo, where holding a button down (or cycling through an option) offered rapid-fire input, far faster than most mere mortals are capable of. It's the perfect thing for smashing through RPG-mini games or charging up finishing moves. I can understand why it's not here -- it's cheating -- but I'd have welcomed even more customization. Maybe multi-button input, like one button replicating square and triangle at the same time? It seems like a missed opportunity.

Something I can't test as an able-bodied gamer is the accessibility factor, here. For anyone that has issues with fine hand control, the addition of large paddles or transplanting any button to a more easy-to-reach location, could be a literal game-changer. Microsoft has taken this notion and run with it a whole lot further, but it's good that Sony is making moves in this direction, even if it's not quite at the scale of an entirely new controller.

To its credit, though, the Back Button Attachment makes for a relatively cheap upgrade, at $30. In comparison, the SCUF Vantage 2, aimed at pro gamers, costs roughly $200. If you're a medium- to high-level gamer, Sony's new peripheral might be the perfect fit. For the rest of us, it's likely a taste of the future of DualShock. The attachment goes on sale January 23rd, next week.