2020 will bring new ways to upgrade your hearing

If your peepers are letting you down, you have an endless choice of ways to frame that physical defect as a style statement. If you have hearing loss, not so much. Even the term "cool hearing aid" feels like an oxymoron. It's not for lack of trying; companies have attempted to deviate from the "pink plastic blob" for years now -- the result is usually something like a silver, or black plastic blob instead.

Why does that matter? Because for whatever reason, there's still a stigma attached to wearing a hearing aid. If companies start making products that are as stylish as they are functional we all win. Fortunately, that's starting to happen, and here are four new ways to upgrade your hearing without it feeling like a penance. 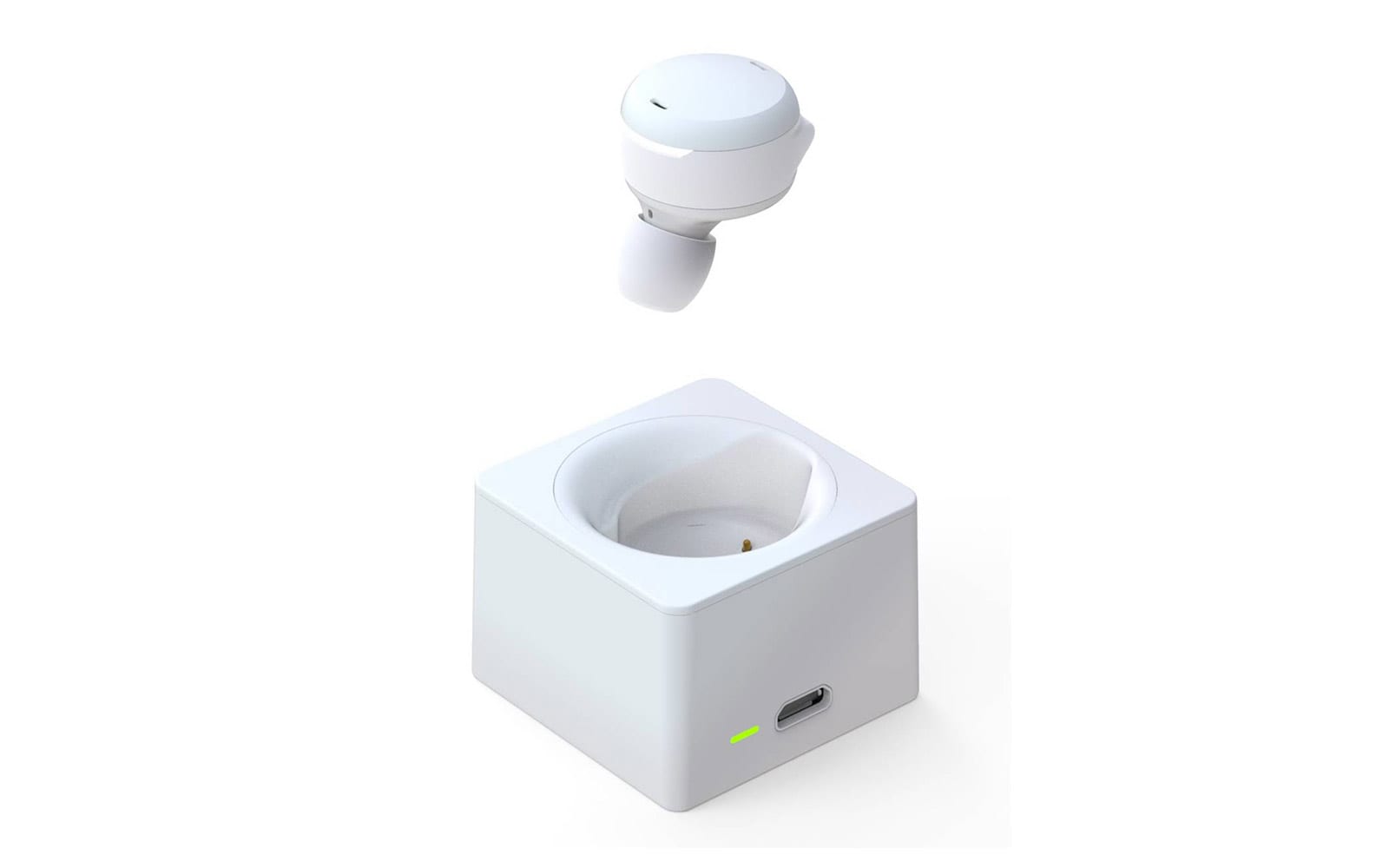 If you have mild hearing loss in just one ear, a pair of hearing aids might not make sense (or fit your budget). Olive's Smart Ear aims to bring consumer headphone style to an assisted hearing device. It's not a "hearing aid" instead it's an amplifier (think reading glasses, but for ears). It's primarily a solution for those who find themselves only speaking to the person on their "good side" at dinner parties, but has a few other tricks up its sleeve.

The bud looks just like any of the (many) TWS headphones on the market today. Rightly or wrongly, some people still feel self-conscious wearing a "classic" hearing aid, so the Olive's design might make you feel more like you're sporting a funky wearable than a miniature ear trumpet. Most hearing amplifiers simply mimic the design of a hearing aid, and rarely the smaller, sleeker ones. More and more companies are taking the bud-like approach, but Olive Union is going all in.

The Smart Ear's focus is on boosting your one bad ear when you need it most: during a conversation. I'll admit, I've used my own one-sided hearing loss to my strategic advantage at the dinner table ("sorry, this is my bad side, I can't really hear you"), but the Olive would definitely help me out when I actually do want to converse with the person to my left. It's comfortable, tailored to your hearing through a simple hearing test, and offers up to seven hours of listening time.

Unlike many TWS headphones, the Olive doesn't come with a charging case. Instead, there's a simple cradle that connects to any microUSB power source. I also found that if you don't get a good fit, the bud can gently work its way out of your ear and start creating feedback. The companion app has an option to reduce this, but it still comes and goes.

As for the actual hearing assistance, I found it to be adequate for my level of (conductive) hearing loss, but it tends to amplify most sounds equally, like the clink of plates or the clatter of cutlery in a restaurant as well as your table mate's retelling of their recent meditation retreat in Peru.

While the Olive isn't quite right for me, I can see it being an inexpensive solution for those who need a bit of a boost from time to time. It's certainly small enough and durable enough to live in your bag or pocket for those times you need it. The fact it looks more like a headphone makes it less discreet, but also less drab. 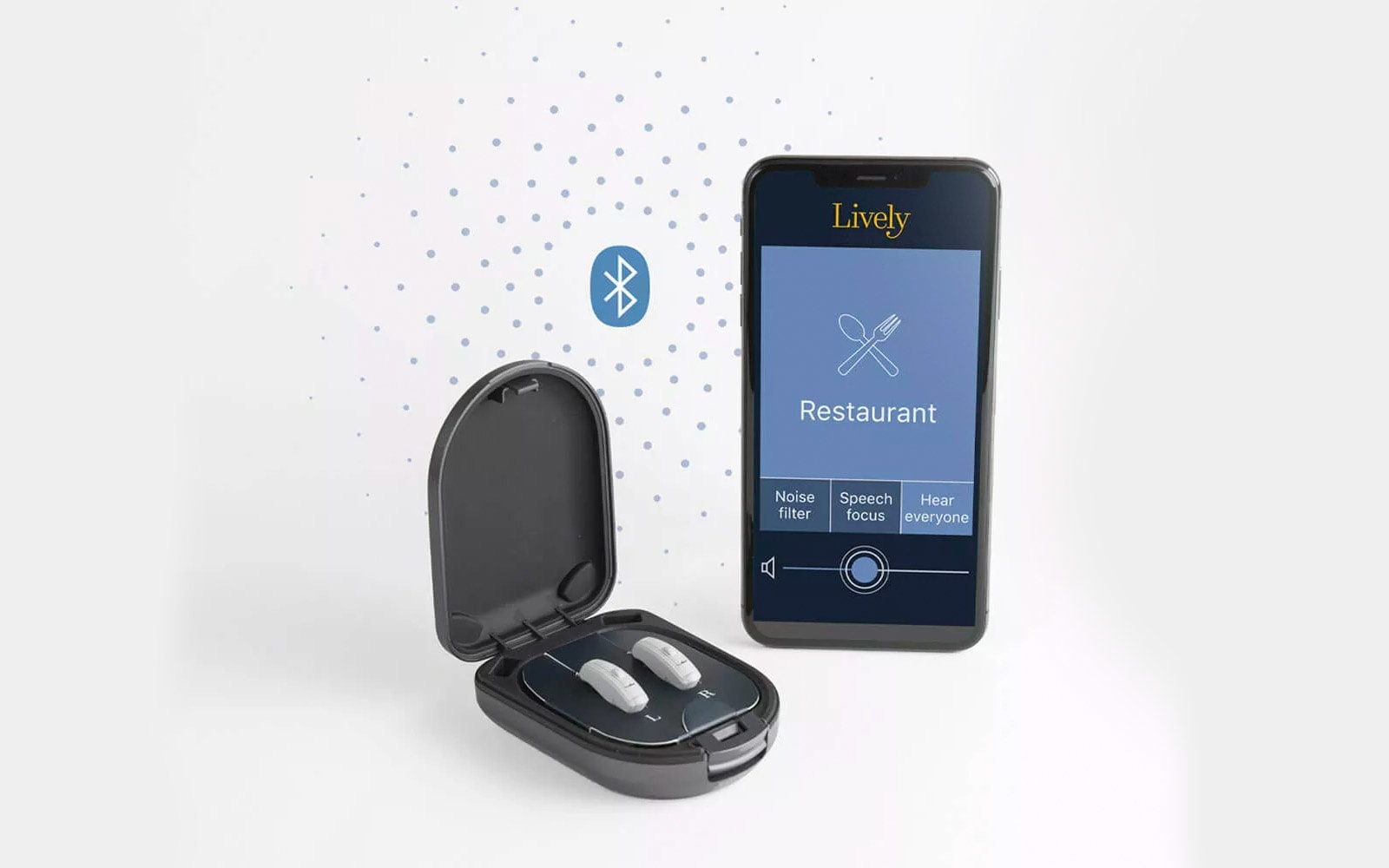 Technically, Lively doesn't "make" hearing aids, instead, it's an all-in-one audiologist for the modern age. Instead of traipsing to get a hearing test in some dated, dusty high street store, simply take the company's online test and they'll ship your hearing aids directly to you.

The experience brings shopping for a hearing aid more in line with well, anything else you'd want to buy online. Of course, you can still speak with an audiologist about your personal needs, or visit one of their premises if you prefer.

With Lively, it's more about streamlining the whole experience so that it feels like a convenient service, rather than a dreaded trip to the docs. The hearing aids Lively sells are of the same quality you'd expect from your regular provider, but the savings of being online mean they don't cost as much. Lively's hearing aids cost $1,650 a pair which is lower than many rivals of similar quality.

I visited their New York office for the "in-person" experience, and it was about as nice as any visit to the hearing specialist as I could have hoped for. The hearing aids are small, discreet and -- for my hearing loss -- worked remarkably well. The sound enhancement was more natural than some rival products I've tried, and the companion app makes customizing your settings a breeze. There's music streaming here too, but only for iOS users.

One issue I tend to find with hearing aids is that the volume isn't quite set loud enough, something that only becomes apparent once you've left the clinic and had a chance to use them in the real world. Typically, this would mean booking a return visit for an adjustment. With Lively, you can request assistance via the company's app. Simply tell them the problem your experiencing, and receive help remotely. For me, that was an update sent to my phone, which boosted the volume of my hearing aid to a far more satisfactory level. All of this without moving from my chair. 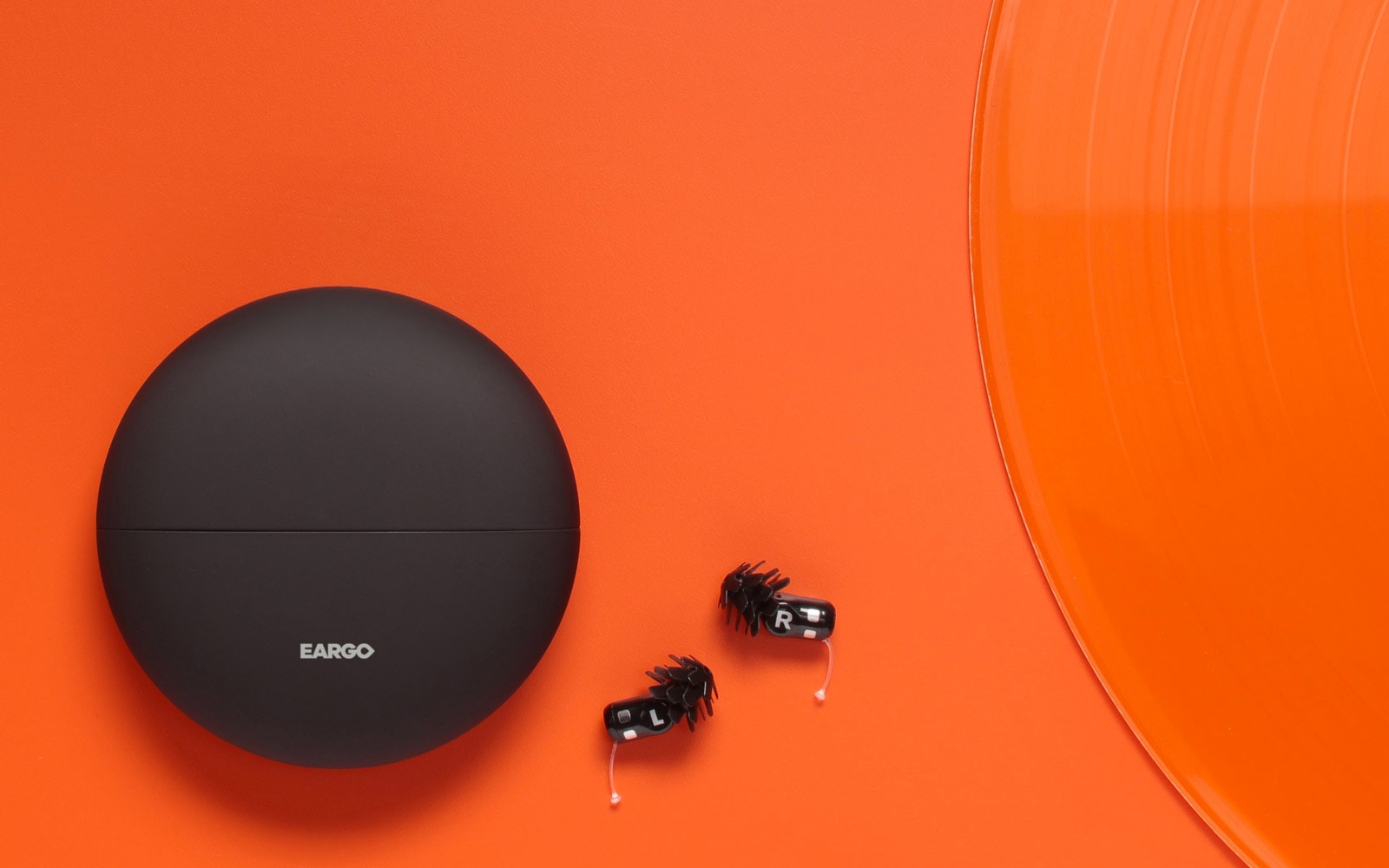 Despite the name (and the marketing images), the Neo HiFi isn't a music streaming device. Instead, it's an incredibly small hearing aid, by far the smallest on this list. Its diminutive form means it's practically invisible once you've placed it in your ear (don't worry, there's a small tab for removing it easily). This makes it a great choice for those who really don't want people to know they're wearing a hearing aid.

Beyond its tiny size, another selling point for the Eargo, is the whole user experience. Unlike most hearing aids that maybe have a carry case for the device and spare batteries, Eargo's products all have the battery built-in. The case for the Neo HiFi not only stores the buds, but charges them at the same time (you then charge the case once a week or so).

As the Neo HiFi is so small, there's no Bluetooth onboard, but once again, that case comes to the rescue. Place the buds in that, and you can connect to them via the companion app to adjust settings and more.

Another factor to consider is also related to its size. As discreet as they are, the more space a hearing aid has, the louder and clearer the audio tends to be. This means the Eargo might not be quite as impactful, sonically, as other options on this list. The company has engineered the Neo HiFi to get the most out of the real-estate is does have, and the clever tip design does mean there's a good amount of isolation, but I found them to be less suitable for my hearing loss than other options on this list.

The Eargo Neo HiFi is the middle ground between form and function. They are easily the "coolest" hearing aids on this list, with a product that really feels like it was designed for the young as well as the more senior user. The trade-off might be the audio, which is no small thing for a hearing gadget, obviously. But it still delivers a solid boost for its size, you just need to make sure it's appropriate for your hearing first. 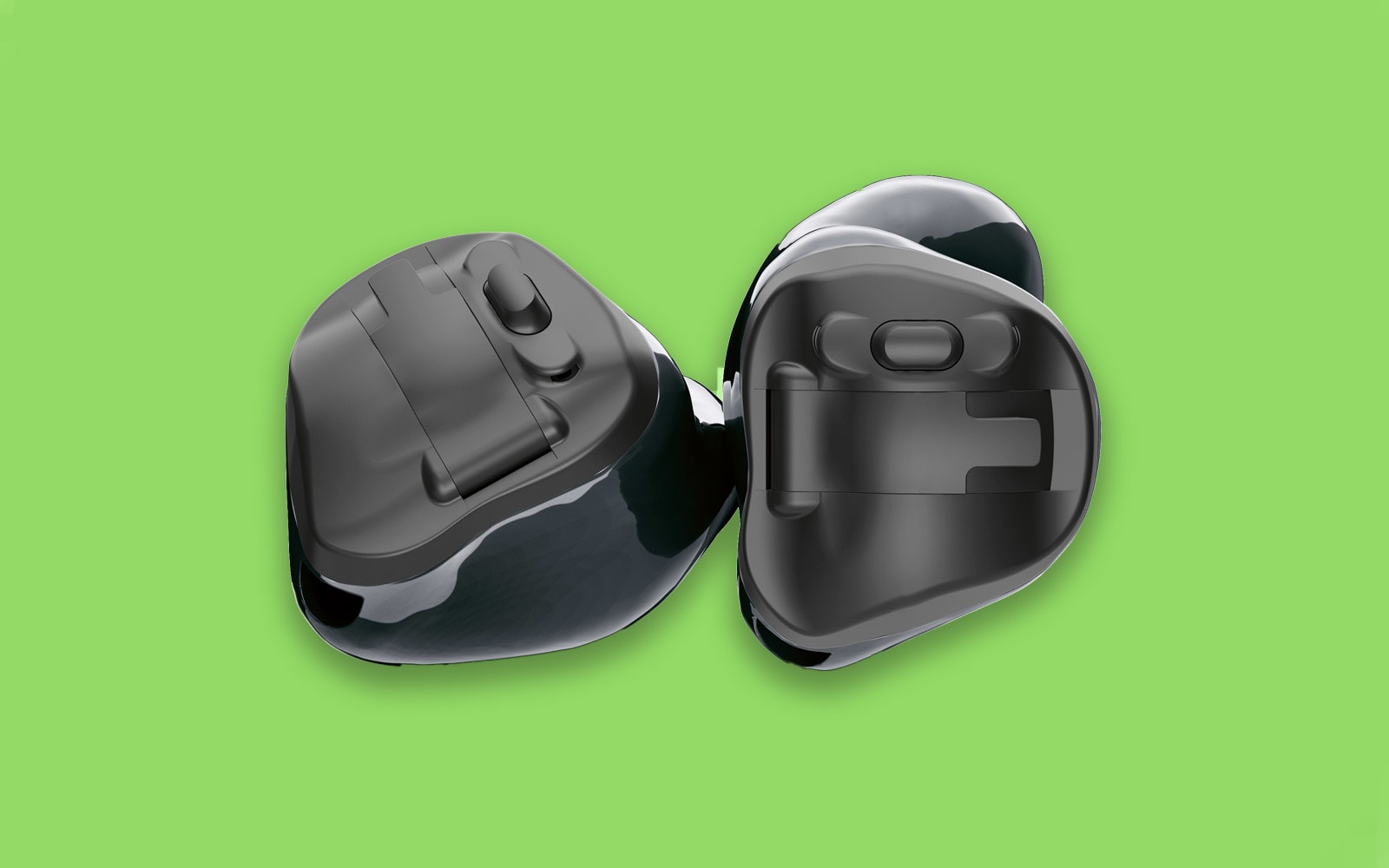 Unlike the other companies we've discussed so far, Phonak is a classic hearing aid manufacturer, not a disruptive newcomer. That means its new Virto Black device has decades of experience behind it, and it shows.

The Virto Black is, in many ways, the yin to the Eargo's yang. It's a more traditional company that's trying to appeal to a broader audience with a few slick tricks. But first and foremost it's a very capable hearing aid. For me, it's the device that helped most with my conductive hearing loss, to the point where I almost felt like I had "normal" hearing again, no small feat.

When it comes to sensors and software, the Virto Black is a powerhouse. According to the company, it 16 different hearing performance features, five different wireless technologies and will analyze 1,600 data points to calibrate the sound to your needs. All you need to know is that it's smart enough to adapt its sound on the fly depending on your surroundings, though there are presets (which you can manually configure) too, if you want a little more control.

As the name suggests, the hearing aids are black, and they sit in the ear, rather than behind it. This might seem like an unusual color choice at first, but it actually makes them look more like wireless headphones than your grandpa's beige hearing aid. It's a weird world where we're more okay with black buds in the ear rather than something discreet behind it, but here we are.

Where the Phonak gets more interesting are the additional features. For one, there's Bluetooth music streaming. This might seem like an obvious addition, but it's not as common as you think. And for a variety of reasons, when it is present, it's often iOS only. The Virto Black will stream music from any Bluetooth source, be it your phone, laptop or even a television. This connectivity also means you can take calls through the hearing aids too. For calls, the sound is fine, but don't expect the buds to sound anywhere near as good as dedicated headphones. This is a bonus feature more than a headliner.

Perhaps my favorite thing about the Virto Black, after its solid performance at helping me hear, is the "Roger" accessory. It's a small disc laden with microphones. Place Roger anywhere (within about 30 feet of you) and it'll beam whatever it hears right into the Virto Black. You can even control which direction it "listens" and there's a lanyard mount so you can have one person in a crowded room have a direct line to your ears. It feels like having hearing superpowers and makes the Virto Black feel a lot more versatile. Note, your audiologist might charge extra for Roger, but it's both good fun and actually useful.

All this technology doesn't come cheap. At around $6,000 the Virto Black is pitched as a premium option. Unfortunately, the economics of hearing aids hasn't benefited from masses of competition, so prices remain high if you want the good stuff. If you don't need any of the bells and whistles and don't mind a behind-the-ear device, you don't need to spend this much, but if you like the style, and some of the more gadgety features, paying up for good hearing shouldn't feel frivolous.