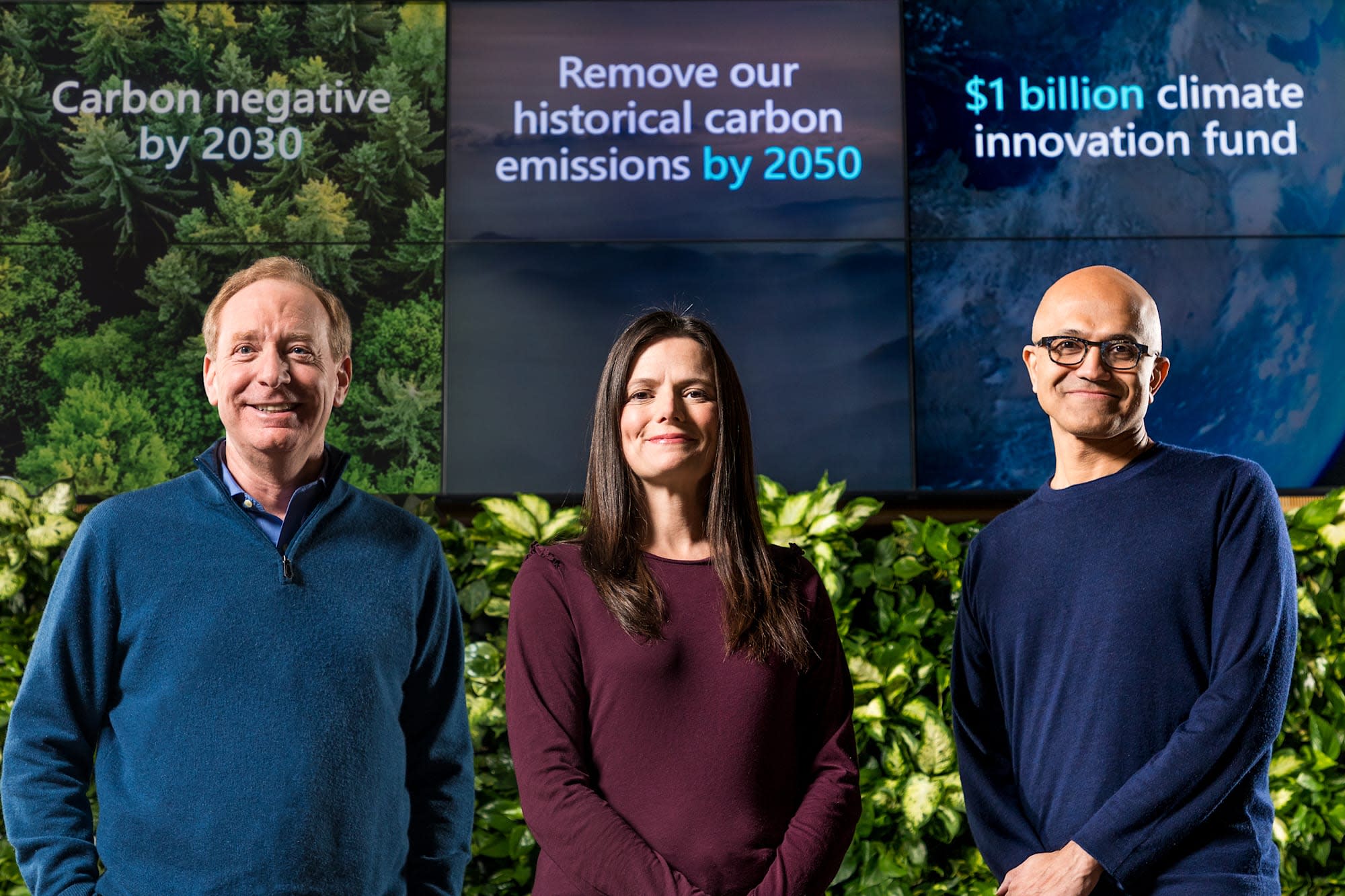 2019 was the second-hottest year on record, and it's going to take a lot of effort to slow the Earth's ever-rising temperatures. Today, Microsoft announced details on what it'll do to help: the company now plans to be carbon negative by 2030.

"While the world will need to reach net zero [carbon emissions], those of us who can afford to move faster and go further should do so," Microsoft president Brad Smith writes. "That's why today we are announcing an ambitious goal and a new plan to reduce and ultimately remove Microsoft's carbon footprint." That's a big change from Microsoft's plans to reduce carbon emissions by 75 percent that were announced just over two years ago.

In addition to its plans to be carbon negative by 2030, Microsoft also says it'll remove from the environment all of the carbon the company has either emitted directly or produced through electrical use since it was founded in 1975. That's a pretty massive undertaking, and Microsoft notes that actually making that progress will require a detailed plan for the decades to come. For starters, Microsoft says it'll fund this initiative in part by expanding its "internal carbon fee" that it has had since 2012 -- it'll start charging for the company's direct emissions as well as emissions produced from its supply and value chains.

To that end, Microsoft is also launching an initiative to help suppliers and customers reduce their carbon footprints; the company is also launching a $1 billion climate innovation fund to incentivize the creation of carbon reduction and removal technologies. Microsoft also says it'll make carbon removal a part of its procurement process in looking at supply chain partners, another way it plans to do a better job of accounting for emissions created throughout the company's vast footprint. Microsoft will report its progress annually going forward in a new Environmental Sustainability Report, as well.

Going into further details, Brad Smith goes deep on what Microsoft has done thus far and why it's not good enough. He says the company has worked to be "carbon neutral" since 2012, but that's not good enough anymore. "Like most carbon-neutral companies, Microsoft has achieved carbon neutrality primarily by investing in offsets that primarily avoid emissions instead of removing carbon that has already been emitted," he wrote. "That's why we're shifting our focus. In short, neutral is not enough to address the world's needs." The company is first shooting for a "net zero" carbon impact, where it removes as much emissions as it puts into the air, and then going for "carbon negative" by 2030, where the company will be removing more carbon from the air than it produces.

In the short term, Microsoft plans to reduce its "scope 1" and "scope 2" emissions to near zero by 2025. Scope 1 emissions are classified as direct emissions that activities create, like exhaust from your car. Scope 2 are indirect emissions, like things that come from the production of electricity used to power a building on Microsoft's campus. To reduce scope 1 and 2 emissions, Microsoft says it'll to 100 percent renewable energy sources for all its data centers and buildings. The company also plans to move to a fully electric vehicle fleet by 2030 and pursue Living Future Institute Zero Carbon certification and LEED Platinum certification for its Silicon Valley campus and Puget Sound campus modernization efforts.

A bigger issue, however, are "scope 3" emissions, which Microsoft says come from basically all other activities in which the company is engaged in, from business travel to the entire lifespan of its products, including electricity used after purchase. That's a much bigger undertaking; the company says for most companies scope 3 emissions outnumber 1 and 2 put together. The company says it'll reduce scope 3 emissions by more than half by 2030, primarily through its "internal carbon tax" that it is paid by each division of the company based on carbon usage; that money goes towards the company's sustainability efforts.

Getting Microsoft to "net zero" is one thing, but actively removing more carbon than the company creates is another. Microsoft says it's going to put its money where its mouth is and invest in carbon removal technology. That's where its $1 billion fund comes in; the company plans to both invest in new innovation as well as accelerate ongoing development. Of course, right now, we have no idea what that technology will look like, and Microsoft admits that $1 billion is only a small portion of what's needed. But if the company is serious about the goals it has presented today, it's going to need to do a lot to advance this particular field.

Overall, this is quite the massive plan, and given that it's been just over two years the company's last big announcement regarding sustainability, it's likely we'll see goals and plans shift over time. Indeed, there's enough unknown here to give skeptics pause. The good news is that Microsoft is making those goals more aggressive as the climate crisis worsens. Whether or not the company can pull this off obviously remains to be seen, but we're hoping that its rather bold plans spur some of its competitors into similar action.

In this article: carbon, carbon emissions, climate change, emissions, green, greenhouse gas, microsoft, tomorrow
All products recommended by Engadget are selected by our editorial team, independent of our parent company. Some of our stories include affiliate links. If you buy something through one of these links, we may earn an affiliate commission.