The delivery giant has also invested an undisclosed sum in the company.

Delivery giant UPS has ordered 10,000 electric trucks from Arrival, a technology company based in the UK. Some of the vehicles will be trialed in London and Paris later this year, building on a similar experiment that was run by the two companies in 2018. The pair then hope to deploy the trucks across Europe and North America over the next four years. If everything goes well, UPS has the option to buy another 10,000 vehicles.

For now, the trucks are still in a prototype phase. The current iteration is 2.7 meters tall and designed for "walk-in and walk-out" use, according to Patrick Bion, Arrival's chief of product. The final version should have a battery pack "around about 75KWh," he explained, and offer roughly 250 kilometers (155 miles) on a single charge. The vehicle will use CCS, a popular charging standard that cleverly combines the slower Type 2 port with two large DC pins for rapid charging. Arrival has also previously confirmed that its trucks will use BlackBerry QNX, an enterprise-focused operating system designed for cars, robots and medical equipment.

The trucks will utilize a "skateboard" underbelly that Arrival hopes will translate across to all of its future vehicles. According to Bion, this covers "everything below the floor," including the suspension, brakes and steering. The design is flexible enough, however, that changes can be made for different customers and vehicle types. "We have the ability to change the wheelbase," Bion explained, "to add front-wheel drive, rear-wheel drive and all-wheel drive. We can also change the battery pack capacity so that the customer, if they only need 150 kilometers (90 miles) per day, doesn't have to pay for a bigger battery that could theoretically do more." 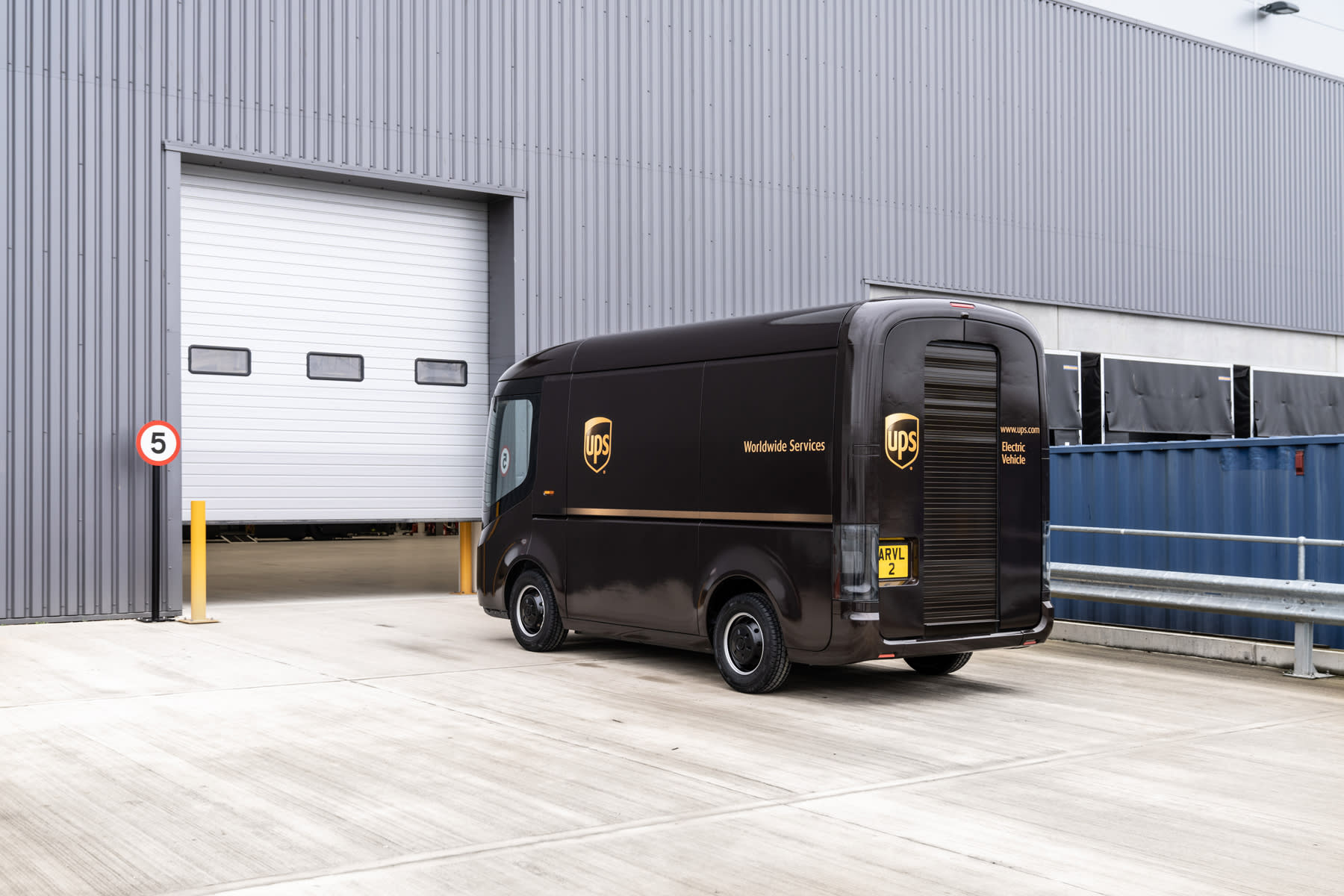 Many automakers, including Volkswagen and Hyundai, are making a similar platform play. Instead of designing a suite of cars individually, they want to start with a technical foundation that can be applied to many different bodies. In theory, the approach should reduce manufacturing costs and the time required to design and prototype new electric vehicles.

Arrival's first UPS trucks will be built in Banbury, Oxfordshire, where it currently runs a research and development facility. The majority of the 10,000 order will be built "local to where it's needed," though, according to Bion. Most companies, including Tesla, assemble their vehicles in one or a few large factories and then ship them all over the world. Arrival, however, wants to build its electric trucks inside cheaper and smaller "microfactories" that are close to the final customer. These still-theoretical facilities will take three months to set up and be profitable "from thousands of units," the company promised in a press release today.

UPS has also invested an undisclosed sum in Arrival.

As part of today's announcement, UPS has also invested an undisclosed sum in Arrival. It builds on a €100 million ($110 million) cash injection and "strategic partnership" by Hyundai and Kia earlier this month.

Arrival was founded by former Roborace and Yota Devices CEO Denis Sverdlov in 2015. The company -- originally called Charge, or Charge Auto -- started developing prototypes with UPS in 2016. That same year, it also struck a deal with Formula E and showed off its vision for a new electric truck at a Wired conference in London. At the time, Sverdlov said the first of these boxy vehicles would be built in 2017. "The desire was to get a vehicle out really quickly and seize the market opportunity," Bion said.

Instead, the company began a trial with Royal Mail in London. The British postal service tested three and a half, six and seven and a half tonne trucks with a 100-mile range (161 kilometers) around the capital in August 2017. Less than a year later, UPS announced that it would be trialing 35 Arrival trucks in London and Paris. These EVs had a battery range of over 150 miles (240 kilometers), a special driver display and safety-centric ADAS systems. 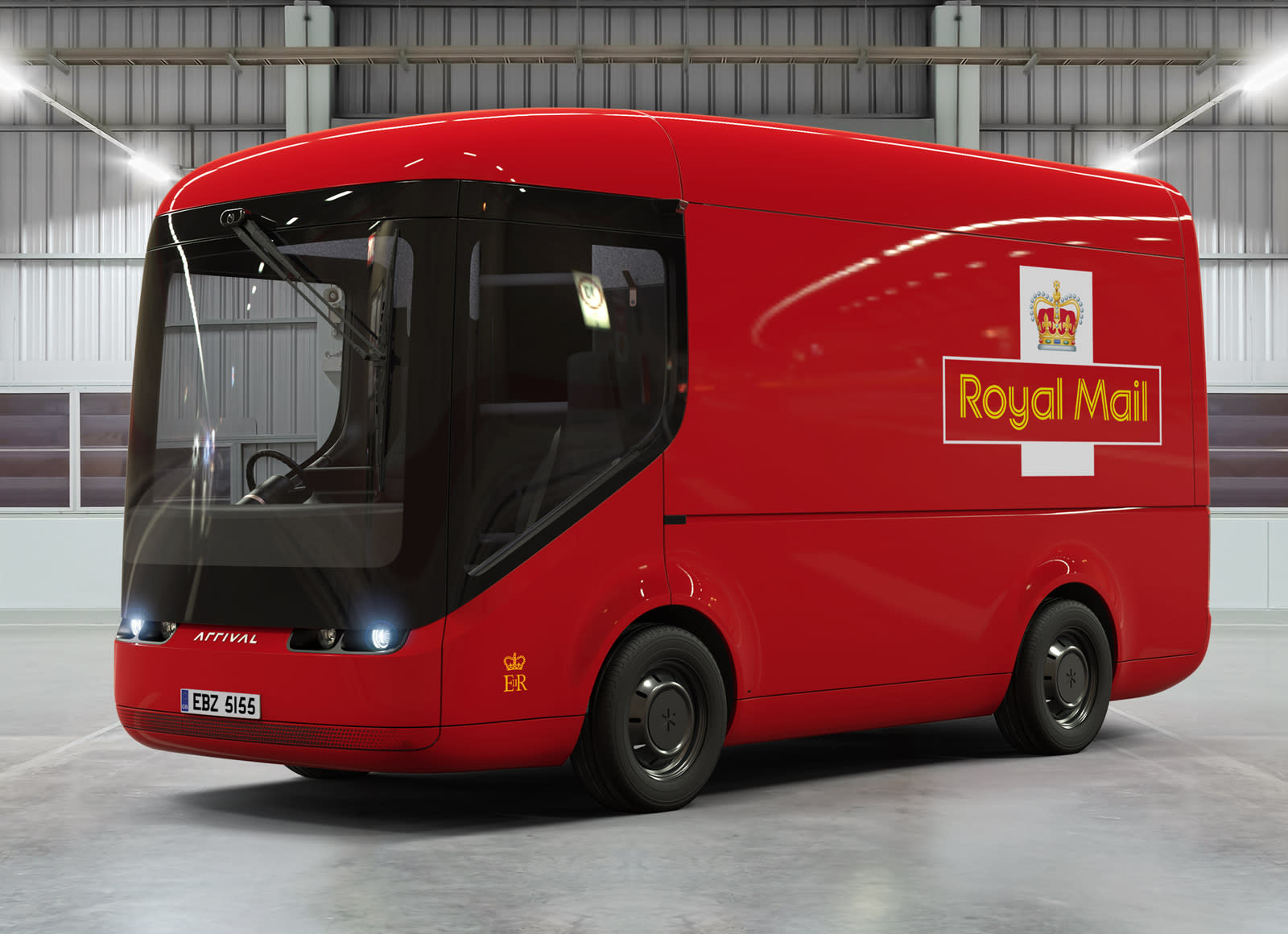 According to Bion, these trials served two purposes: to address any concerns that fleet operators had about range, usability and charging, and to improve its prototype hardware and software with real-world testing.

Somewhere along the way, Arrival realized that it needed to "reset a little bit" and focus on building a flexible platform, rather than a single electric truck. The company calls this new approach "Generation 2" electric vehicles. "Rather than build one vehicle which would meet, let's say the same specifications as a Ford Transit, and try to sell hundreds of thousands of those, we've developed an intelligent vehicle architecture which means we can customize the vehicle to different fleet's requirements," Bion said.

"As soon as our vehicle leaves our facility, it's ready for their operations."

For UPS, that's seriously attractive. The company has traditionally built up its fleet by buying and modifying vehicles by large automakers such as Daimler. Arrival, meanwhile, has asked UPS what it needs and designed a truck that meets those requirements. That includes how much cargo it should hold, the shelving design, and even how the doors open. "As soon as our vehicle leaves our facility, it's ready for their operations," Bion said.

UPS is on board with sustainable transportation, too. Three years ago, the company deployed electric trucks built by Daimler's Fuso sub-brand. That same year, it started electrifying some of its old diesel vans in New York City and ordered 125 of Tesla's still-in-development semi-truck. By 2018, the shipping company had 300 EVs deployed in Europe and the US, and nearly 700 hybrid electric vehicles. Last February, it also announced plans to deploy 50 electric trucks built by commercial EV startup Workhorse.

Arrival's partnership with UPS should validate its flexible 'skateboard' platform and encourage other fleet operators to order similar vehicles. The company also has trials planned with DHL, Royal Mail and British retailer John Lewis, which could have a similar effect and expand its business.

It's taken five years, but Arrival is seemingly on the cusp of being a full-blown automaker. In that time, though, Tesla's business has exploded and established brands have realized the importance and growing demand for electric vehicles. Arrival faces some fierce competition, too, from agile startups -- Rivian, for instance, has attracted investment and a 100,000-vehicle order from Amazon -- that want to dominate commercial fleets.

All products recommended by Engadget are selected by our editorial team, independent of our parent company. Some of our stories include affiliate links. If you buy something through one of these links, we may earn an affiliate commission. All prices are correct at the time of publishing.
View All Comments
UPS will use Arrival’s electric trucks in the US and Europe