The difference in execution is pretty staggering.

As you might have seen elsewhere, I'm in the middle of writing our Motorola Razr review. I bring that up now because there's simply no way not to compare that thing to the new Galaxy Z Flip we just played with at Samsung's Galaxy Unpacked event in San Francisco. After all, these are the first two flip-phone-style foldables to hit the market, and they're launching within weeks of each other after prolonged periods of hype.

That brings me no particular pleasure to write, by the way -- Motorola has a long track record of great phones, and the Razr is a pretty astonishing first attempt at a foldable. Still, Samsung's experience releasing the Galaxy Fold means the Galaxy Z Flip benefits from extra polish and forethought. Oh, and much better components. In case you hadn't been keeping track, the Z Flip packs Qualcomm's Snapdragon 855+ chipset, plus 8GB of RAM and 256GB of storage. You'll also find 12MP wide and ultra-wide cameras on the back of the Z Flip's top half, a 10MP front-facing camera in a center-aligned screen cutout, and an eSIM in addition to a nanoSIM slot.

Put another way, it's just about as capable as the best phones money could buy last year; that's something you just can't say about the Razr. Performance in our very limited hands-on time was, well, exactly what you'd expect: Remarkably quick across the board. It's always tough getting a sense for how fast a phone is when you don't have more than a half-hour to play with it, but it's clear even now that in terms of pure power, the Z Flip is no slouch. 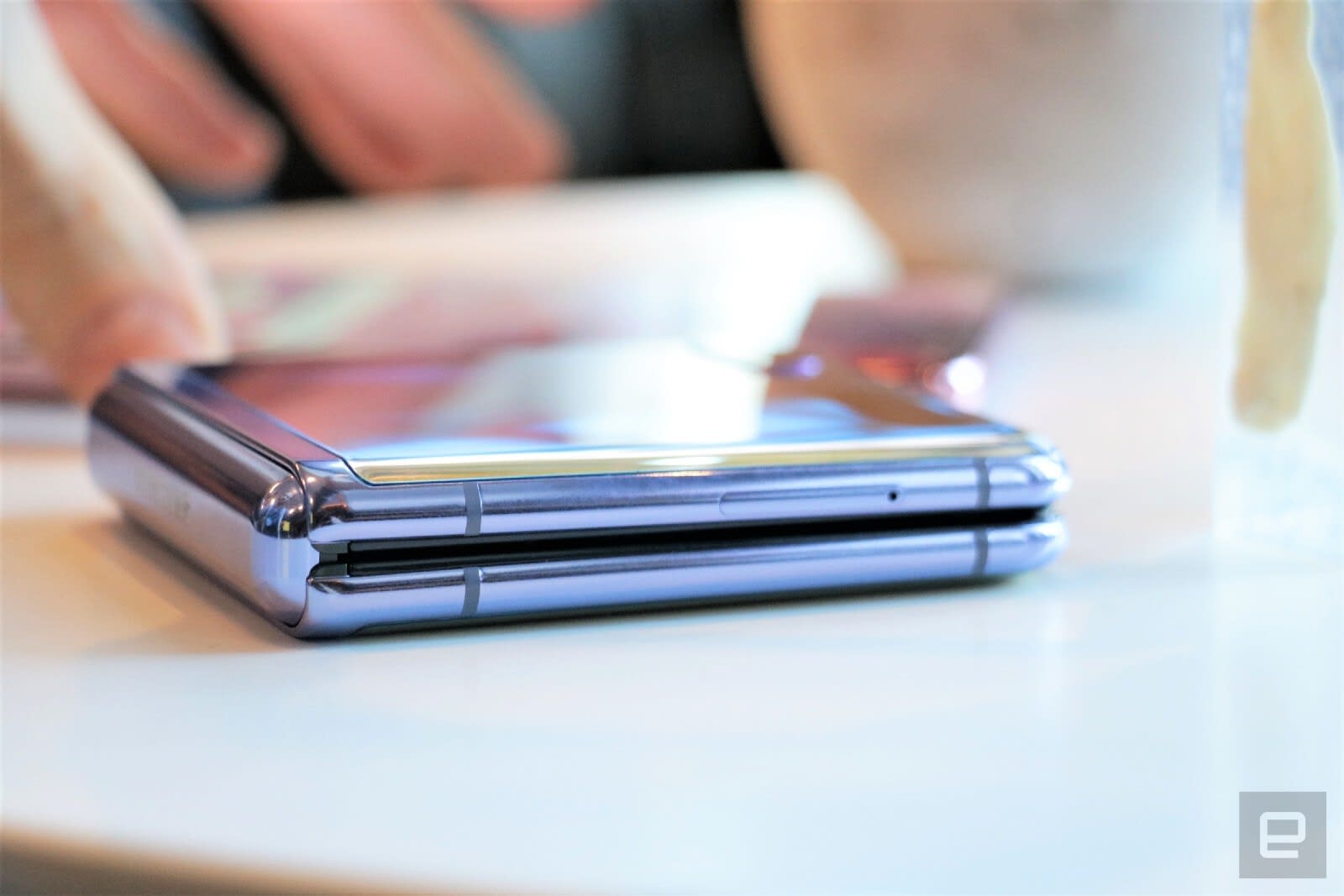 But I'm getting ahead of myself. The real standout here is this 6.7-inch, flexible Super AMOLED screen -- or rather, the stuff covering it. Samsung confirmed early in its Unpacked press conference that the screen is covered in fully flexible glass, meaning it should be dramatically more durable than the soft, plastic screens used in devices like the original Galaxy Fold, Huawei Mate X and, yes, the Razr.

Real-world testing may reveal shortcomings we just can't pick out right now, but I find myself feeling less concerned about what would happen to the Z Flip after a butterfingers moment. (It doesn't hurt that the hinge has been reinforced with special fibers to keep debris out of the phone itself.) And I simply can't convey to you just how much better a proper glass screen feels to use than a plastic OLED -- that nagging, back-of-my-head concern about scratching that internal screen is gone. Apart from a noticeable crease, using the Z Flip feels just like using a regular phone.

As it turns out, "feel" counts for a lot where foldables are concerned, and Samsung has a surprisingly good handle on it here. While the Z Flip doesn't click into place quite as convincingly as the Razr does, it also doesn't make a tell-tale creaking sound. (At least, as far as I could tell -- it was pretty loud in there.) And to Samsung's credit, the hinge system in place here allows for more flexibility than what I've seen before. You can, for instance, prop the Z Flip open 90 degrees so you can rest the phone on a table and have it shoot with either of the 12MP rear cameras. That might not sound terribly exciting, but if it saves from having to carry a tripod around, I'm all for it.

Ultimately, though, the Z Flip has two things going for it that make it especially attractive compared to the Razr. For one, it packs a pair of batteries that provide 3,300mAh of power in total. I know we're not exactly making one-to-one comparisons, but flagship phones we tested with similar specs last year could generally stick around for more than a full day -- that's about the minimum you should accept from a premium smartphone. And speaking of premium, the Z Flip's price is hard to argue with: At $1,380, it's more than $100 less expensive than the Razr. Well, for now, anyway.

A few other notes:

I can't say I'm surprised I like the Z Flip as much as I do -- few companies have the kind of foldable experience Samsung does. I am surprised, though, that the Z Flip feels as uncompromised as it does. Sure, it's probably more prone to physical failure than your average smartphone, and despite Samsung's work with this flexible glass, it seems like noticeable screen creases are here to stay. These issues don't feel as pressing as they used to, though, and that's enough to make me wonder: Is it possible Samsung has won the foldable age already? Maybe, but I wouldn't count anyone out of the race just yet.