I really wanted to like the original Galaxy Buds. They're some of the best-designed true wireless earbuds I tested last year. They're tiny, which makes them comfortable (well, as much as earbuds can be), and they came with a wireless charging case at a time when that still wasn't a standard feature. However, the audio quality was disappointing, call performance was subpar, and limited customization for onboard controls was frustrating. With the new Galaxy Buds+ ($150), Samsung improved its wireless earbuds in many ways, but some things still need work.

One thing that doesn't need fixing is the design. I thought Samsung nailed that last time, so I'm actually glad to see it return. In fact, the Galaxy Buds+ look damn near identical to the previous model. The earbuds are still very small compared to much of the competition, which increases comfort (even for extended periods) and they're a bit more discreet, too. The only real difference between these and the Galaxy Buds is an additional microphone on the outside. Unless you know it's there, and where to look, you probably won't notice. Samsung still includes two sizes of wingtips along with the usual ear tips. These small wings help keep the buds in place, but there's also a wing-less ring in the box if you prefer not to use them. 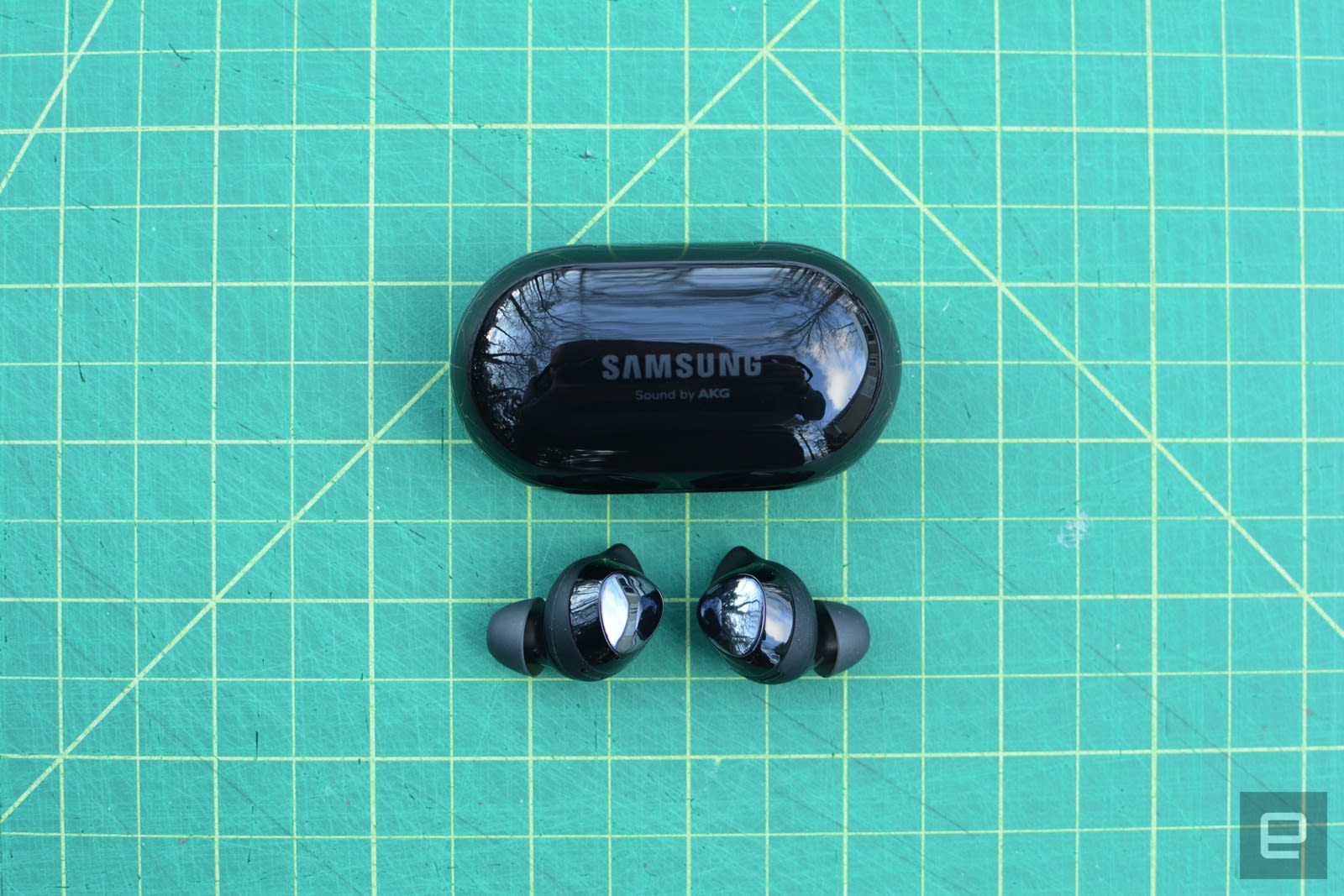 The tap-and-hold action returns, and you can still customize it. And you still have to sacrifice access to a voice assistant to get full volume control on the buds. For tap-and-hold, you can choose between Bixby/Google Assistant/Siri, ambient sound, Spotify access or volume. One big caveat: That one-touch access to Spotify that Samsung hyped during its Unpacked event earlier this month is only available on Android. Bummer. If you do have an Android device, the feature will resume whatever you were listening to on the streaming service. If you weren't listening to anything, Spotify will play "something new" it thinks you'll like. And if you don't like it, you can tap-and-hold again for another selection.

Just like the Galaxy Buds, volume up is only available on the right and volume down can only be assigned to the left. So if you fancy using voice commands, you'll have to sacrifice at least half of your volume controls. Ambient sound is also handy, so that's another feature you'll have to give up if you like the option of quick volume adjustments.

There is an alternative option, but it's not a very good one. Inside the Labs section of the companion app, you can activate volume control on the edge of the earbuds. If you do, a double-tap will raise the volume on the right side and lower it on the left. The issue here is that it's difficult to get this work reliably. I either miss it and nothing happens or I get too close to the main touchpad and I skip tracks. If I take an extra few seconds to think about the target, I can usually get it to work on my first attempt. However, trying to do this while on a run only increases the difficulty.

Samsung massively improved customization on iOS devices. With the Galaxy Buds, all of the companion software was inside the Galaxy Wearables app, which is to say alongside tools for smartwatches. That piece of software isn't available on iOS, so while you could use the Galaxy Buds with an iPhone, you had to give up a lot of customization. Now there's a separate Galaxy Buds+ app for iOS, so if you prefer Apple products, you're not missing things like ambient sound control, EQ presets, Find my Earbuds, touchpad customization and more. The new app also displays battery life percentage for each bud, which is another handy piece of info. It shows the level for the charging case if it's open and the earbuds are resting inside. Android users will still use the Galaxy Wearables (Wear) app, but the features are mostly the same.

On iOS, the Galaxy Buds+ don't sync with notifications and Samsung's Gaming Mode for the earbuds isn't available. It may seem like using these new buds with an iOS device is limited, but trust me, it's a lot better than it used to be. Just having a dedicated app is a huge improvement. It's not surprising that Samsung would make some features exclusive to Android devices, and thankfully, they're things you can probably live without. One-touch access to Spotify is enticing, for example, but I'm not going to give up on-board volume controls for it.

As far as the EQ presets go, they're mostly the same. You can choose from Normal (the default), Bass boost, Soft, Dynamic, Clear and Treble boost. In my tests, Dynamic offered the best all-around results across a range of genres. This was also true of the Galaxy Buds. There's ample bass, but it's not muddy or overpowering. The preset has a lot of presence, and details cut through more clearly than on most of the other options. That default Normal setting is also solid, but Dynamic gives things a little more oomph. If you're hoping for more detailed EQ tweaks, Samsung doesn't plan to add anything beyond presets. This means no equalizer curve for you to manipulate to your liking.

Overall, I'm impressed with the improvements Samsung made to the audio on the Galaxy Buds+. The sound quality on the last-gen model was just OK, with bass-heavy genres lacking the punch they have on the best-sounding earbuds I've tested. I could've used a little more volume, too. I'm happy to report that Samsung addressed both of those shortcomings. Once again it enlisted its subsidiary AKG to help with the audio, and this time there's a two-way speaker with both a tweeter and a woofer inside. The company claims this offers a 38 percent increase in sound dimension over the Galaxy Buds. Whatever the exact increase, I could tell the difference immediately. 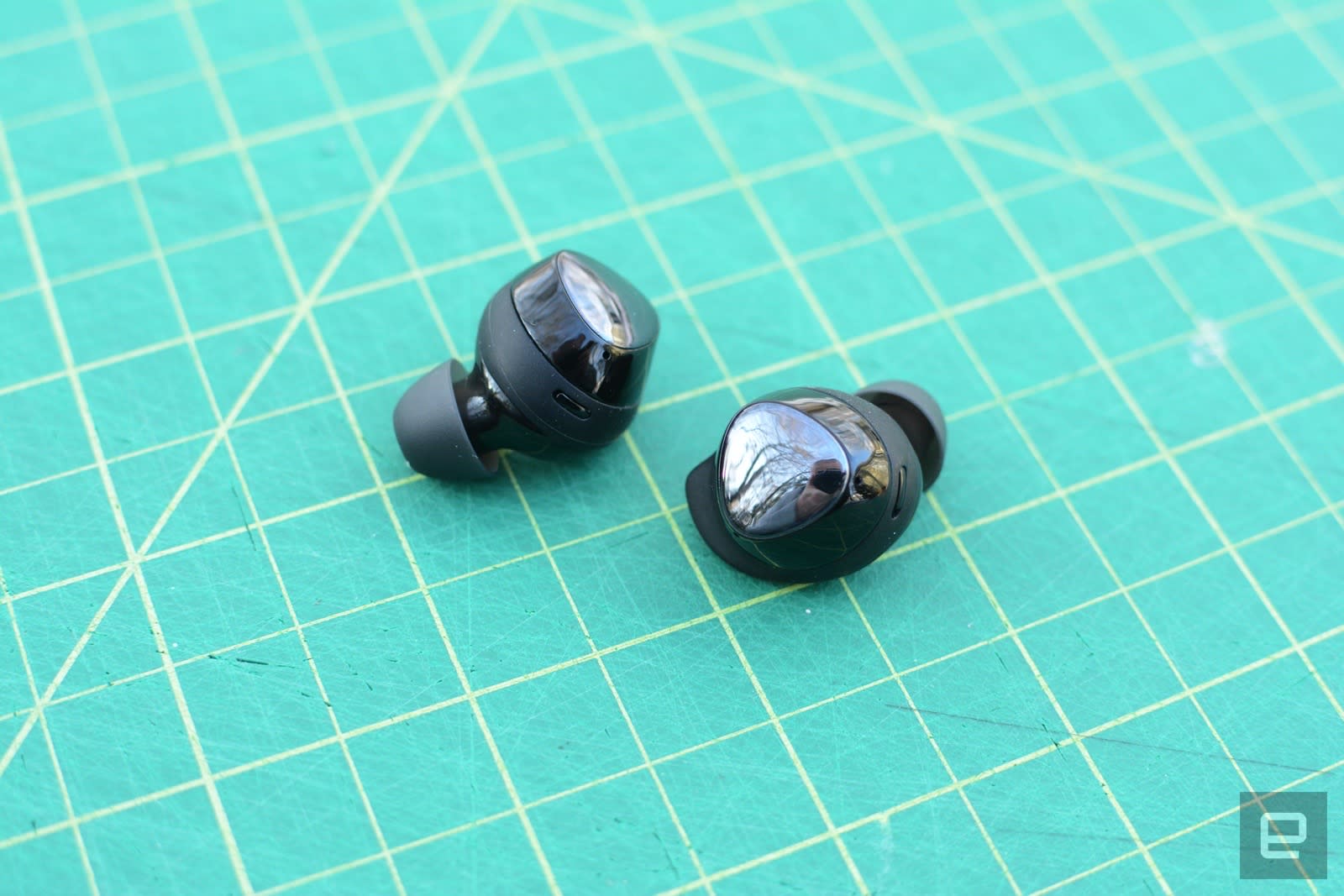 The Galaxy Buds did just fine with things like clarity and tone, but the Galaxy Buds+ add the extra low-end the first model lacks. The results across genres are much more consistent. Again, I primarily used the Dynamic setting, and with the exception of Normal mode, I don't think the others were as well rounded. Electronic, hip-hop and metal tracks with booming bass and a massive depth of sound are open and big. They don't seem compressed, nor do they lack the energy captured in those songs. A track like Purity Ring's electrodance-y "stardew" has bombastic bass, but the synths, hi-hats and vocals cut through clearly. There's plenty of space for things to work, so the sound envelopes you rather than feeling like noise simply blasted into your head. I can't overstate how much better these than the first Galaxy Buds in terms of audio. It's night and day.

One big feature I haven't mentioned is active noise cancellation (ANC). And that's because ... the Galaxy Buds+ don't have it. They do let you hear what's going on around you with an ambient sound mode, but in terms of countering any noise, you're left with passive noise isolation (i.e., having something in your earholes). The Galaxy Buds+ actually do a decent job here, especially at around 75 or 80 percent volume. I wasn't able to test these on a flight, but they did well at blocking out a noisy TV during my Kindergartener's afternoon binge. Of course, if the Galaxy Buds+ did have ANC, they'd probably cost around $200 or more, so I'm fine with the feature set here.

When Samsung introduced the Galaxy Buds, it hyped the call quality. Unfortunately, those claims didn't hold up. Those earbuds picked up a lot of ambient noise, so they basically sounded like you were on speakerphone. That's not ideal when you need to take an important call. With the Galaxy Buds+, the company added an additional exterior microphone on each side in an effort to improve the sound of your voice when you're on a call. Indeed, the new buds do a better job of focusing on your voice and they pick up less background noise than the Galaxy Buds. According to people I called, there was noticeably less "speakerphone" chaos during our conversations. 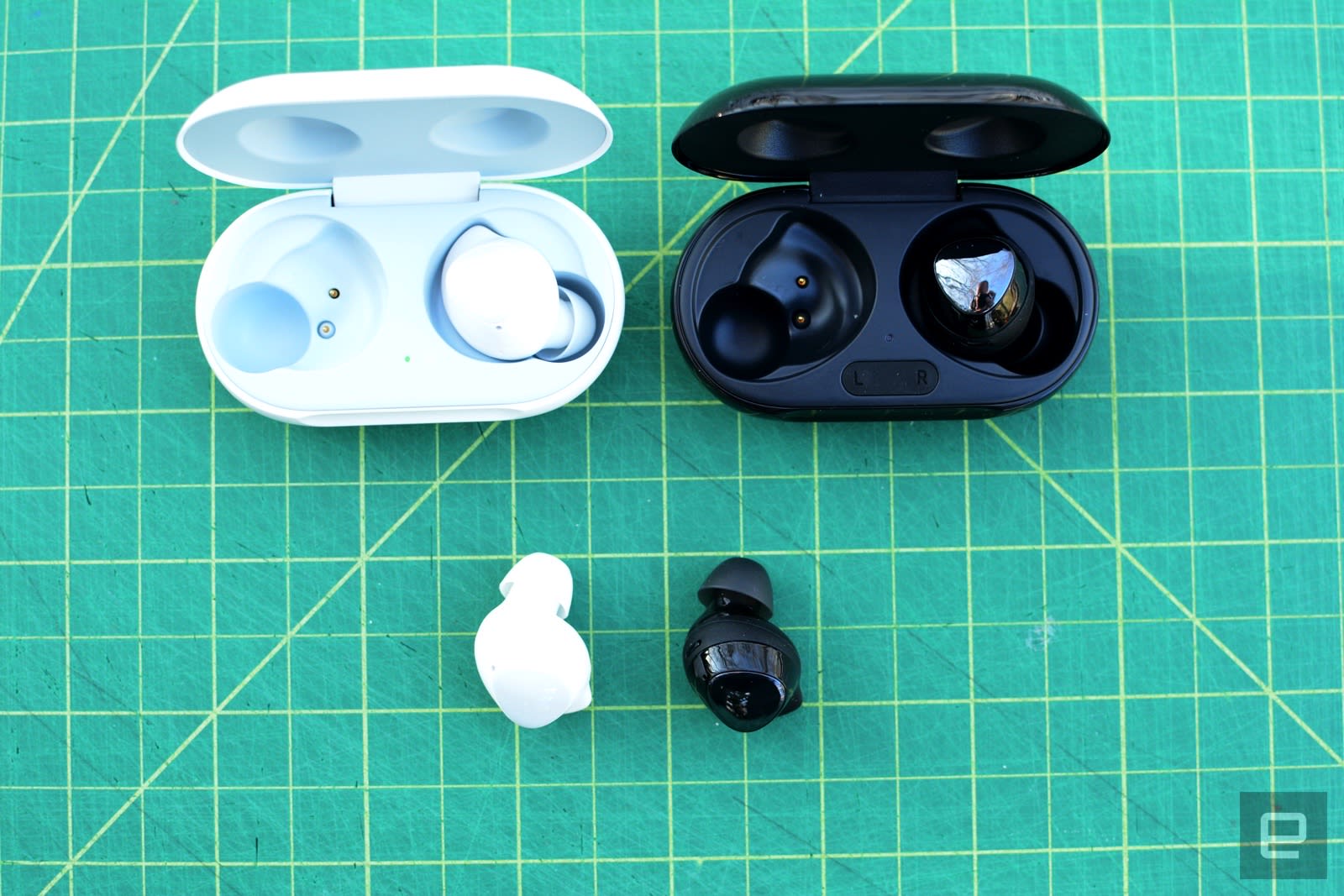 Samsung also improved battery life on the Galaxy Buds+. The company says they'll last for up to 11 hours on a charge. That's almost double the six-hour rating from the previous version. During my tests, the Galaxy Buds+ lasted just shy of 11 hours, but only by about 10 minutes. And that's with ambient sound on medium or high for most of that time. The case still only holds one additional charge, but this time that's an additional 11 hours of use. There's still a quick charge option that gives you an hour of use in just three minutes. And yes, you can charge these on the back of a Samsung phone with the company's PowerShare technology.

At $150, the Galaxy Buds+ are situated directly in the mid range. Apple's AirPods with a wireless charging case cost $199, unless you can catch a sale. Sure, there are other features there -- like hands-free Siri -- but if you have to pay full retail, that's still $49 more than Samsung's latest earbuds. Jabra's Elite 75t ($180) is a very good option too, but they'll cost you an extra $30. For what it's worth, Jabra is working on a wireless charging case, but it's not ready yet. Even when it is, it will most likely require an additional investment. While it may not be able to keep the top spot much longer, Sony's WF-1000XM3 ($228) is still our top pick. Of course, they're nearly double the price of the Galaxy Buds+. Lastly, the original Galaxy Buds are still available for $130, although Amazon currently has them listed for $105. I wouldn't recommend going that route, but it is an option.

From the moment I first popped the Galaxy Buds+ in my ears, it was obvious Samsung paid attention to criticism of the Galaxy Buds. This new version sounds better, lasts longer and, perhaps most importantly, brings some key features to the iOS app. The Galaxy Buds+ are more expensive than the 2019 model, but I'd argue all of the improvements are worth the extra $20. Sure, the touch controls aren't perfect and some things are only available on Android, but Samsung has given its latest earbuds universal appeal.