Waterfront Toronto has shot down 16 proposals for Quayside in a technical evaluation.

Sidewalk Labs will have to cede a little more ground on its vision for Quayside, a planned smart neighborhood in Toronto. The company, which is owned by Google-parent Alphabet, published a draft version of its Master Innovation and Development Plan (MIDP) last June. The technical document, which spans four volumes and almost 1,000 pages, is packed with proposals for how the district should be designed, funded and governed. Waterfront Toronto, a tri-government organization spearheading the city's lakeside overhaul, has now completed a technical evaluation of the draft MIDP, which will help its board decide whether to approve the project or sever ties with Sidewalk Labs entirely.

The technical evaluation broke the four-volume MIDP into 160 distinct proposals. Sixteen of those suggestions were labeled "non-support," which means "new solutions must be explored," Waterfront Toronto explained in a discussion guide that will inform a second round of public consultation.

The organization rejected an "efficient" and "ultra efficient" housing concept that would have been roughly seven percent smaller than Sidewalk's equivalent "standard" unit. The proposed homes would have used multipurpose furniture, such as height-adjustable benches that could double as desks or shelves, and flexible walls that could shrink and expand rooms. Sidewalk thought communal eating and co-working could work too, alongside a combination of in-building and off-site storage services. 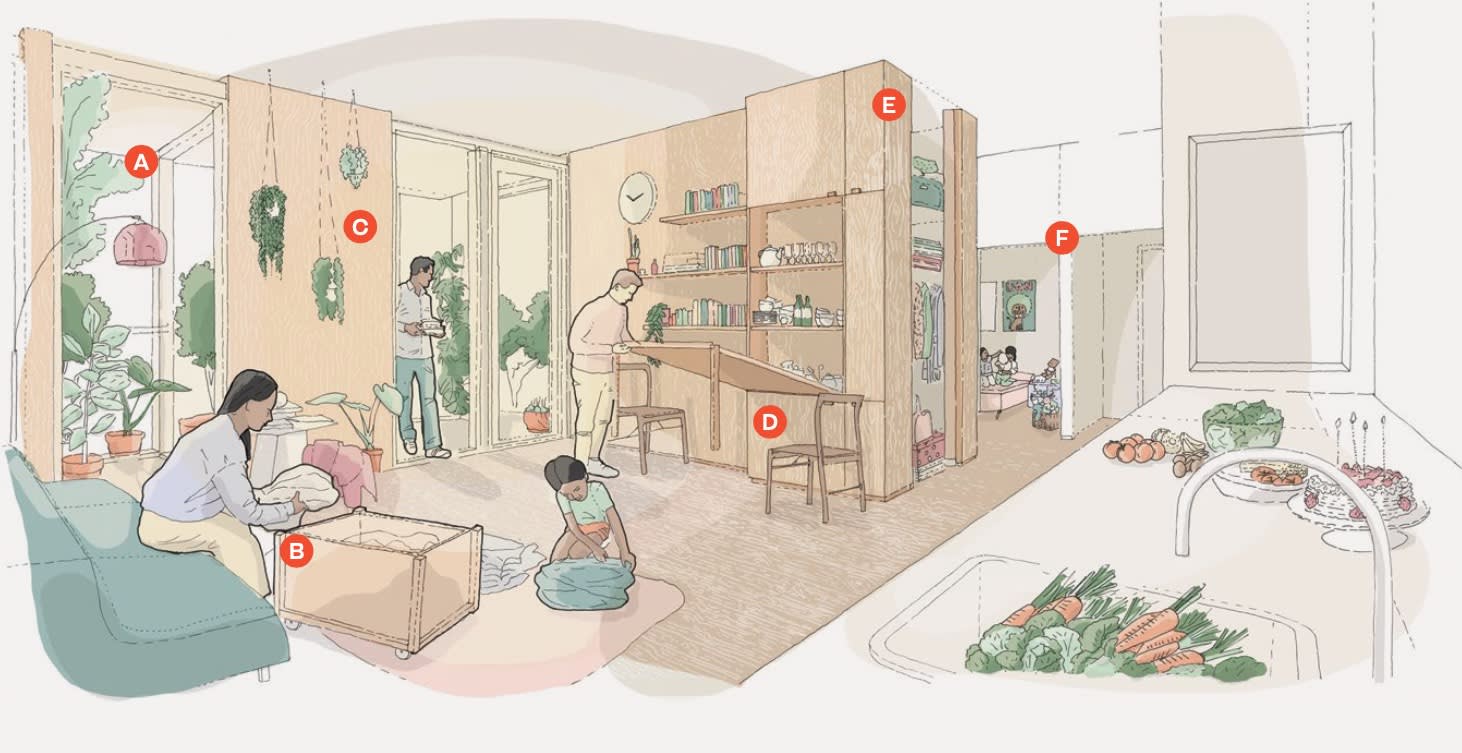 Waterfront Toronto supported buildings with shared building amenities, but thought the "efficient" units were still too small, according to The Star. Sidewalk Labs wants 40 percent of Quayside homes to be below market rate -- of these apartments, it said in the MIDP, the average "efficient" unit would be 578 square feet, compared to the average "standard" of 638 square feet.

Waterfront Toronto also threw out a categorization system that would allow buildings to contain "a shifting mix" of residential, commercial and industrial spaces. Alphabet wanted to move away from single-use zones and adopt a "digital building code system" instead. The approach would measure noise, air pollution and other forms of general nuisance caused by its occupants. For this to work, Sidewalk Labs wanted to shrink Toronto's building code system down to nine "use-neutral" categories in Quayside. Anything that fell under these categories, which included one-person homes, restaurants and stores, could occupy a space, provided it didn't breach the building's predefined nuisance levels.

Alphabet was considering a "lantern forest" that used eight-meter-tall kiosks, clumped together like trees, to protect people from the wind.

Other rejections fell outside Quayside's brick-and-mortar buildings. Sidewalk Labs had prototyped a special "raincoat" awning that could protect nearby pedestrians from rain, wind and dazzling sunlight. The company thought they could be attached to a single building and moored with peg-like piles, or set up between two buildings like a canopy. In a similar vein, the draft MIDP had proposed "fanshell" shelters for parks and other outdoor spaces. They would come in two styles -- a ground-hugging "shell" or a "fan" that sprouted upward like an umbrella -- and be constructed from an origami-style fabric that could be folded and packed away when required.

Alphabet was also considering a "lantern forest" concept that used eight-meter-tall kiosks, clumped together like trees, to protect people from the wind. They could be deployed in open spaces that are exposed to the elements, the company said, or placed strategically in so-called "urban canyons" that create narrow wind tunnels between stores and apartments. Waterfront Toronto rejected the raincoat, fanshell and lantern forest concepts, though. "We're excited to keep looking into solutions for outdoor comfort in our building designs at Quayside, which we will review with Waterfront Toronto on an ongoing basis," Keerthana Rang, a spokesperson for Sidewalk Labs said. 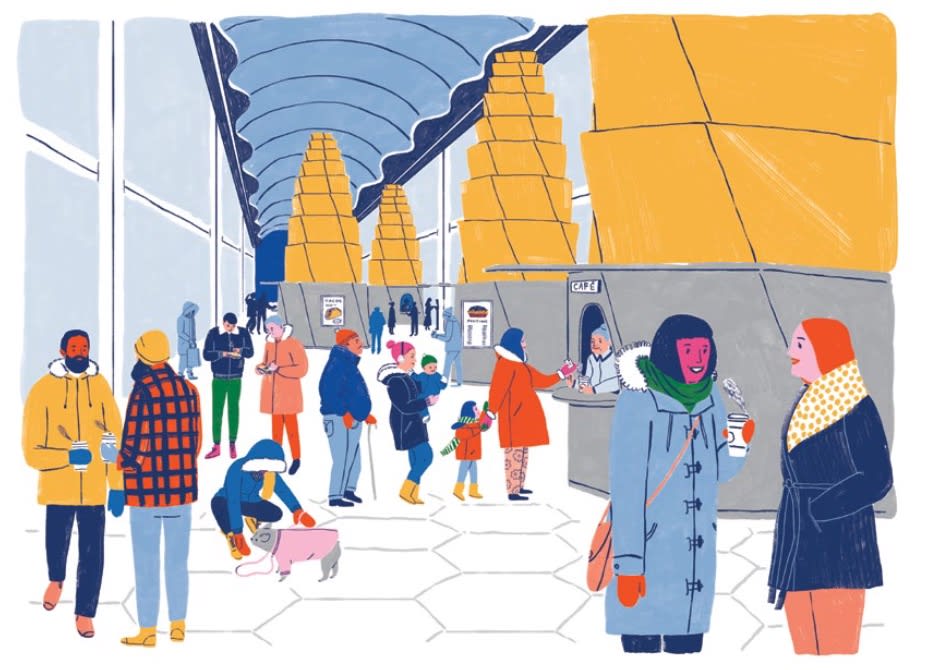 To power and heat its smart neighorbood, Sidewalk has proposed an advanced power grid, thermal grid, waste management system and stormwater management system. The company said that the thermal grid could be connected to the Ashbridges Bay Wastewater Treatment Plant in Toronto -- the second-largest facility of its kind in Canada -- which it argued has the "thermal energy potential" to heat "some 35 Quaysides."

The Alphabet subsidiary also proposed a two-part system for processing food waste in the neighborhood. First, a building inside Quayside would separate the waste and send it to a "neighborhood collection point." An off-site facility would then remove any contamination and process the waste with anaerobic digesters — microorganisms that can break down biodegradable waste — into biogas. Waterfront Toronto rejected the Ashbridges Bay Wastewater Treatment Plant connection and the use of anaerobic digestion for food waste because it didn't believe they were feasible for a 12-acre neighborhood, according to The Star.

Most of the other rejections relate to funding. Waterfront Toronto took issue with a suggestion that it would need to make recurring payments to subsidize advanced infrastructure including the thermal grid. It also didn't agree with the funding required for a Quayside Neighborhood Association, or the idea that 5 percent of homes should be available for owners to part rent and part own through a shared equity program.

These setbacks are dwarfed, however, by the preliminary approvals in the technical evaluation. There were 92 solutions that Waterfront Toronto said it would support provided all funding and delivery was handled by the private sector. The organization approved a further 24 with the promise that it would advocate for additional funding from the government. The final 17 were solutions that it would support while pushing for relevant policy changes and regulatory reform. The 144 approved measures include mass timber buildings, solar-panel and/or vegetation-covered rooftops, EV ownership incentives and charging infrastructure, smart waste chutes and the thermal grid. 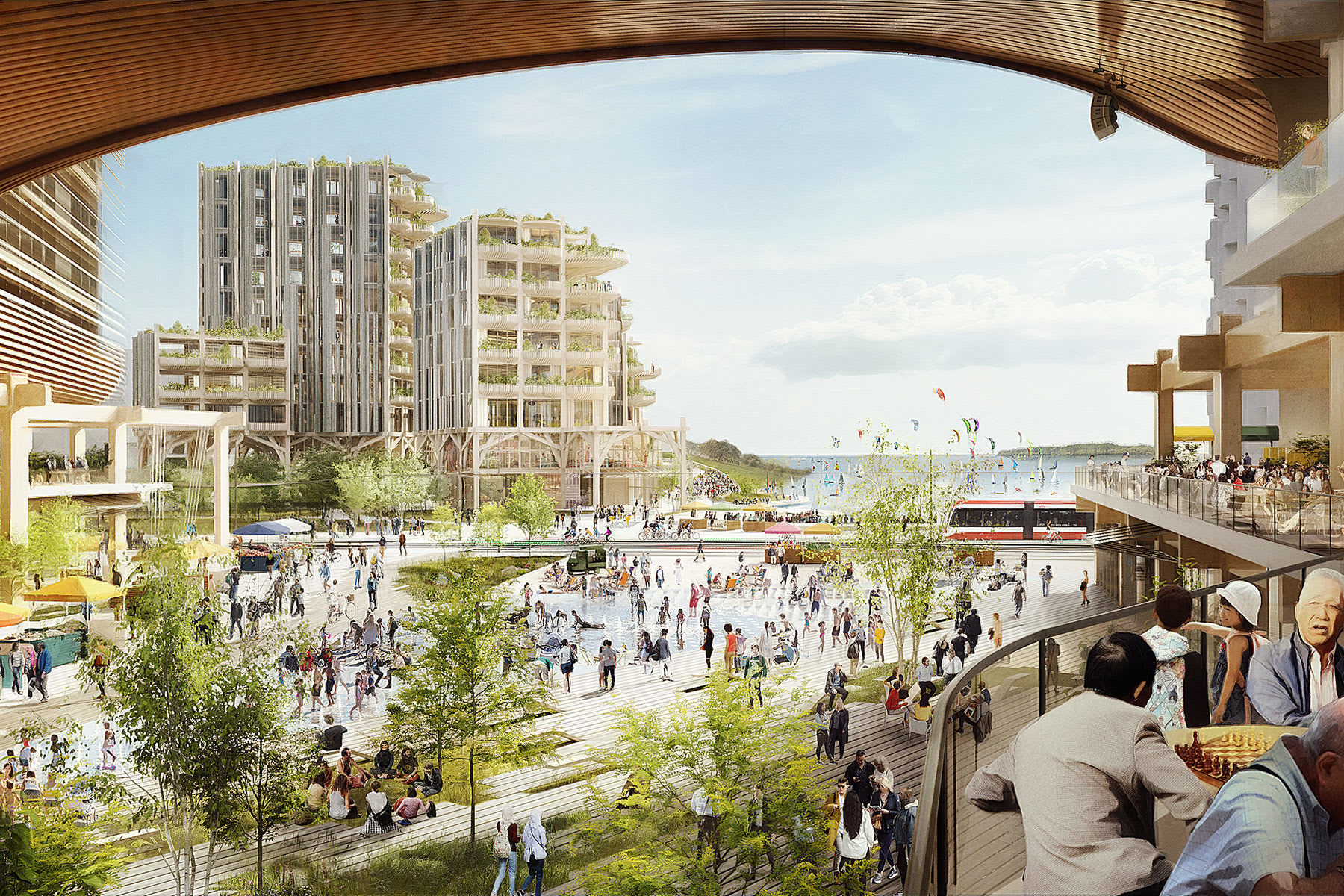 According to Sidewalk Labs, most of the "non-support" decisions were merely confirmation of "agreed changes in project geography, governance, or roles." "That said, we are still in active negotiations with Waterfront Toronto and are still reviewing what will be possible at Quayside," Rang said in a tweet today.

Those "agreed changes" likely relate to the "threshold issues" that Waterfront Toronto had with the draft MIDP upon its release. The tri-government organization's biggest concern was Sidewalk's intent to expand beyond Quayside with a 62-hectare River District that would comprise of five neighborhoods: Keating East, Villiers West, Villiers East, Polson Quay and McCleary. Google also asked to be the lead developer at Villiers West and to build a new Google Canadian headquarters on the 8-hectare land.

In an open letter, Waterfront Toronto said the proposed expansion was premature. "Waterfront Toronto must first see its goals and objectives achieved at Quayside before deciding whether to work together in other areas," Steve Diamond, the chair of Waterfront Toronto's board of directors said. "Even then, we would only move forward with the full collaboration and support of the City of Toronto, particularly where it pertains to City-owned lands." It also rebuffed Sidewalk Labs' proposal to be lead developer and reiterated that it would go through a "competitive, public procurement process" instead.

Sidewalk Labs agreed to all of Waterfront Toronto's demands. For now, that means the evaluation process can continue. The project has divided citizens, though, who want change but are wary of Sidewalk's ties to Google. Waterfront Toronto has until the end of the year to decide once and for all whether the project should go ahead. Before then, it's likely that Sidewalk will have to negotiate and compromise further on its master plan.

"It will not be an easy negotiation, but I believe there is a will on both sides to make it work," Sheldon Levy, a member of the six-person committee that reviewed the technical evaluation told George Zegarac, a fellow member and the CEO of Waterfront Toronto in a letter.

Update 02/21/20 12:10PM ET: Added comment from Sidewalk Labs that many of the "non-support" decisions were a result of the "threshold issues" that were negotiated and remedied last year.