This Final Fantasy VII remake could have gone really wrong. There is my weight of expectation (I adored the original) and the awkward between-console-generation launch timing. Square Enix has also changed the core fight mechanics to (mostly) real-time combat, not the menu-centric, take-your-turn battling found in the original. It's probably the biggest of countless changes made to a game that first came out in 1997.

With little over a month to go, Square Enix offered me access to several chapters of this remake. I played through the first two, coming straight off the back of the intro movie, controlling protagonist Cloud and, later, Barret. (Watch my entire Chapter 1 playthrough below.)

The preview demo then skipped ahead to a later chapter, with brawler Tifa added to the party. I could also access a bunch of new skills, weapons and spells. To cap it off and presumably offer some fan service to Aerith die-hards, I also fought one more boss battle in the sewers, with a party of Cloud, Tifa and Aerith.

These were all signature points in the early part of the original game, and they gave Square Enix a good chance to show how FF7R changes things up. In case you haven't played the original, this preview aims to be spoiler-free. You can ask me questions on Twitter, though and I'll answer what I can there.

So is this Final Fantasy XV but with Final Fantasy VII characters and lore? The battle mechanics might be similar, but having had more time to explore and soak it in, this Remake doesn't really feel the same at all. Midgar, the big city where the first game is set, feels a lot more interesting than the rolling landscapes of Noctis' often empty world.

Once you're outside of battles, there are plenty of characters emoting and elaborating on what's happening in the world, as you run around trying to save it. In fact, nearly everyone in the game had something to say after our team had pulled off our first attack. Lingering around rubble and broken bridges, non-playable characters wondered where they'd go next, mentioning other locations or groups in the FFVIIR world, like the game's Big Bad, the Shinra Corporation.

There are other enemies, too. Sephiroth, the one with the silver hair and snake eyes, made an appearance early in my demo. As Cloud separates from the team and heads back to base, the mercenary has a vision of Sephiroth, a man who's done something bad to him. More importantly, he's supposed to be dead, but here he is, cryptically taunting Cloud. (No spoilers, as promised.)

Later, there's a flashback to a younger Tifa, inside a different reactor than the Midgar ones, standing over someone not long for this world. She hates Shinra. She hates a lot of things. She is also wearing a jaunty cowboy hat -- because we were all young once.

In the PS1 game, these moments were all encapsulated by an inner monologue, two lines of text that popped up on the screen and teased that Cloud might have some... issues. The Remake amplifies these important storyline notes, teeing up what we might see later. One trailer from Square Enix already suggests your party will come face-to-face with Sephiroth during the game, which is only the first part of an episodic saga.

This definitely didn't happen so soon into the original, but I like this kind of plot tease, whatever it might mean. So far, FFVIIR seems to have a good grasp on the original story, while some fresh themes (ghosts that only Aerith and Cloud are able to see, a new rival with a sword) should help keep veterans interested in a plot they've heard once before.

The rest of the Avalanche team, who appear in the original game briefly, are also given plenty of screen time in the first chapter. However, there were no opportunities to fight alongside them during my preview. That might have been for the best. 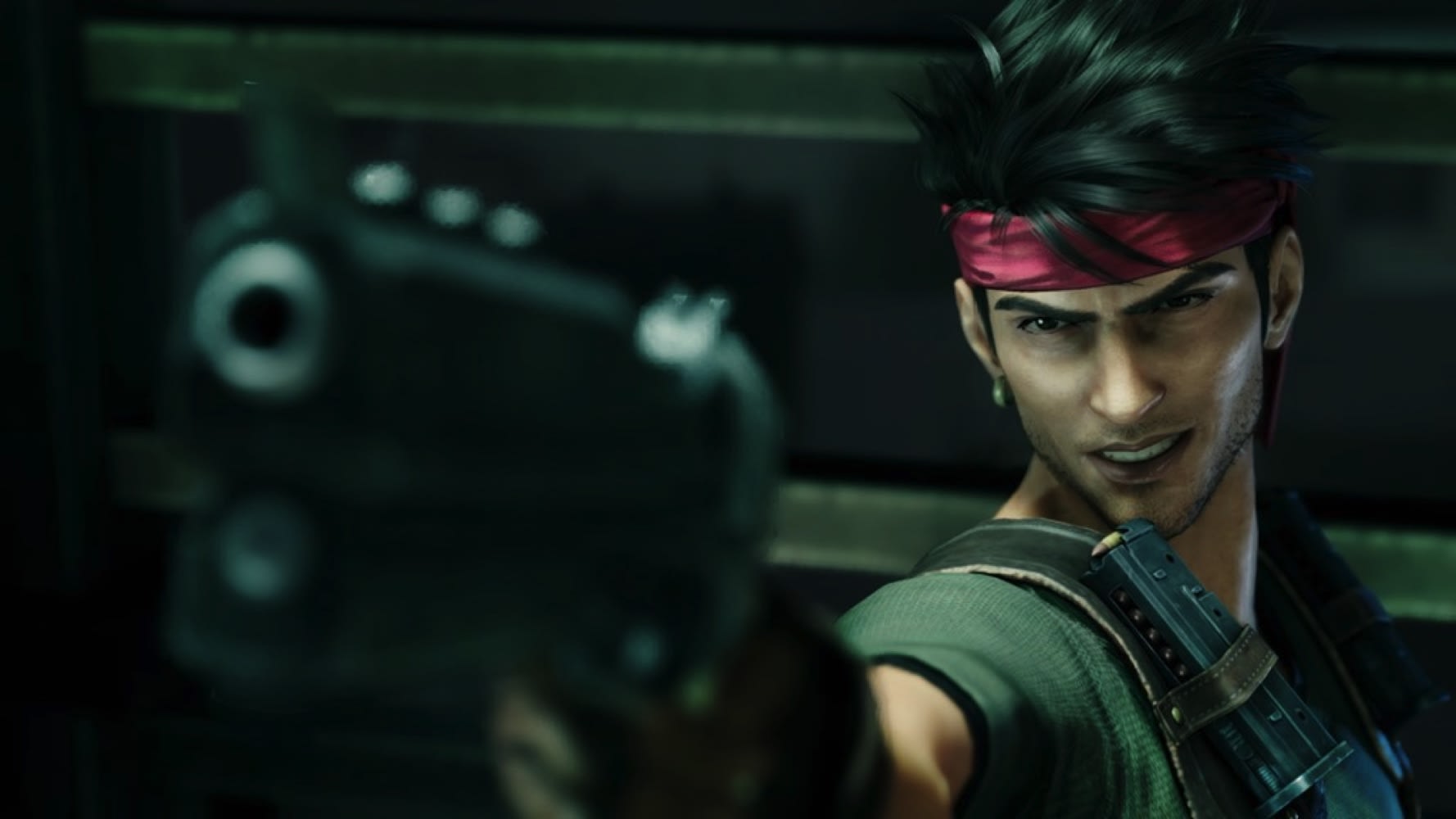 Jesse, Wedge and Biggs pretty much don't shut up. Overall, the dialogue is more polished, but at the same time, it seemed like everyone had to get a line in. It felt like they're verbally jousting in The West Wing as they walk and talk. You just bombed a power plant -- maybe the banter can wait? That aside, the scene-setting is good. It may be early days, but the dialogue seems less awkward than in FFXV.

Let's swing back to the battle system. If you want to hear how the game fuses an Active Time Battle (ATB) gauge with standard attacks, defense and evasion, may I suggest our E3 coverage? Since that first demo, Cloud feels more agile and the addition of two more characters gave me a better feel for how this game is likely to play.

Note: I didn't get a chance to test out the 'classic mode' during my playthrough, which lowers the difficulty and lets the AI dodge, attack and defend as you pick out your more powerful moves. Other writers at the preview event seemed to breeze through the preview— easy mode is likely to be very forgiving.

What I want to talk about -- what I loved -- is how differently each character plays. With Cloud, he's your close-combat heavy hitter, and feels like other Square Enix action RPG characters, from Kingdom Hearts' Sora to FFXV's Noctis. Like all the characters, his more complex skills and magic are all tied up in the menu and take ATB gauges to use, while your triangle skill, unique to each character, unleashes Cloud's Punisher mode. There are nuances between this and the standard Operator mode, but simply put, you will hit more often and harder as a Punisher. If you block melee attacks, Cloud will swing a free counter strike at the offender in question. Attacks that do hit, including any magic, will cancel you out of Punisher mode.

Tifa has long been one of my favorite characters in FFVII, and her skills in the remake seemed typically buff-based. One increased the pressure gauge (helping to stagger enemies), another would increase damage of subsequent attacks. She seemed to hit lighter than Cloud, but also faster.

Her attacks connect satisfyingly but unraveling her triangle attack, which floats between a mild uppercut and occasionally more powerful Omnistrike, took time. It turns out, a little like her Limit Break in the original, it's about stacking those aforementioned buffs to maximize damage and get out of there before a counter arrives. Barret, the gun-arm guy, is still your ranged attacker for the first few chapters, while Aerith (that's the canon name now; I need to reconsider the life I've lead), meted out ranged magical attacks during the sewer boss battle I got to control her for. Yet again she's your go-to magic-user and seems to recover more health through her healing spells than other party members. I like the idea that my party dynamics will actually mean something, through their skills and abilities alone. For fans of the series, it feels more like Final Fantasy VI or X; each character has a role to fulfill in your battles. Sometimes in RPGs, the character is a blank canvas to deck out in the best equipment load-outs. That's not the case here.

In addition to characters' base skills and strengths, more depth comes from weapons (use them to master them, and be rewarded with a permanent new skill) and tiny materia which you can see slotted on weapons in the open world. Judging by how later weapons looked in later chapters, how many materia you can carry seems to correspond to the weapon, just like in the original game. Summon magic, however, is a one-per-person deal. 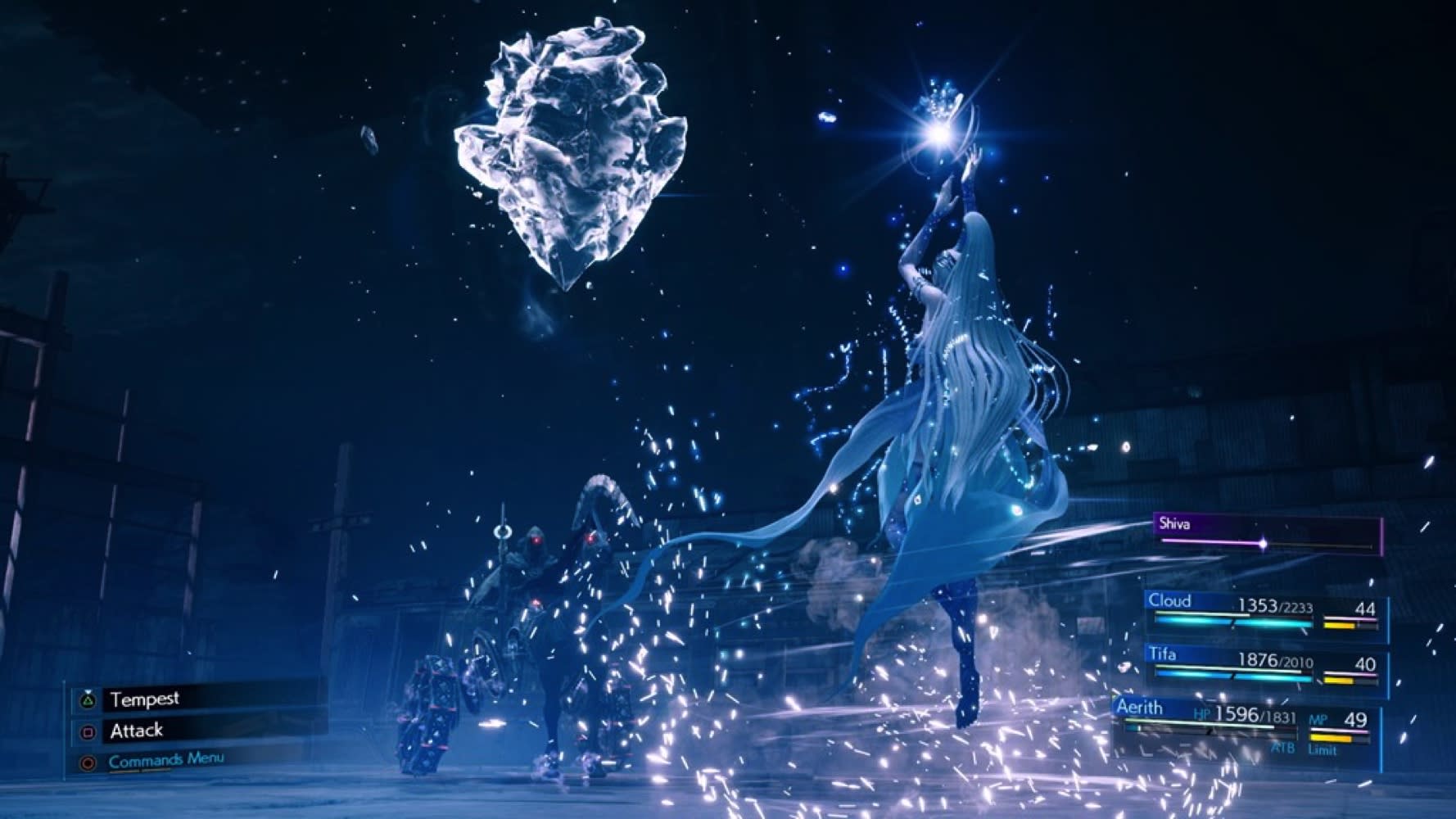 Summons were often one-shot, powerful spells in the Final Fantasy series, but in FFVIIR they're closer to party members, sort of like FFXII. Once you fill the ATB gauges and fulfill the necessary conditions (I didn't see a summon option in the menu outside of my boss battles) they'll appear on the scene and attack your enemies. You can increase control (and damage) by using up further ATB gauges on the creature. Summon animations and attacks all look incredible -- as tradition dictates!

From my demo time, I've gradually come around to the idea of ATB gauges, although having to wait for it to charge in order to heal with items makes for some tense moments in the bigger boss fights.

On that note, the battle theme is even more thrilling than the original, scaled up to full orchestration. The audio team has elevated all of the iconic tracks of the original. You'll hear Sephiroth's sinister theme song being touched upon in the intro movie, folded into the game's main theme song, but the soundtrack is blended together in a way that also helps mesh the different tempos in FFVIIR. Once you win a normal battle, the music doesn't haphazardly jerk back to chill walk-around-warehouse music. Things are kept tense -- it reminds me of how the Metal Gear series would step up or down the tension as you snuck around, got caught, escaped and hid. I missed the victory theme, though, especially after hard-fought moments.

This preview seemed a little bit too focused, though. There wasn't much time to explore the out-of-battle areas or see how the sub-quests might be like. Since the remake was announced, I wondered how the developers would expand FFVII's Midgar saga to encompass an entire game -- and I fear the churn of fetch quests, of moments or stages stretched out to kill time.

There's a glimpse of this during a later chapter, with Cloud, Barret and Tifa planning to attack another reactor. Shinra has a giant robot countermeasure, foreshadowed as you explore and plant your explosive. On the way out, you have the chance to sabotage the robot before you face it, picking up access cards and hacking terminals in order to cut the robot off from processors and weapon supplies. It's a twist on the original where you pretty much just butt heads with the robot once you get out of the plant.

The process itself, though, involved circling upwards, fighting through several floors of the plant, picking up the keycards, choosing what to sabotage and repeating until you got out of the place. It felt long for the sake of being long. The resulting battle with the Air Buster robot did feel slightly higher stakes -- and was a struggle despite my earlier efforts at meddling with its parts.

Final Fantasy VII Remake seems to have solved the issue of modernizing the original's battle system, but I wonder why Square Enix wasn't willing (or perhaps ready) to show off the down-time parts of the game. The world of FFVII is a major part of its appeal. So far, it all looks the part -- but I need to see what happens when Cloud puts his sword away between fights.

See for yourself, the demo of the first chapter is available now.