The battle system works, but can Square Enix remake the entirety of 'FFVII'?
M. Smith|06.12.19
@thatmatsmith

After a long wait, and three trailers in the last month, Final Fantasy VII Remaster was in playable form at E3. The early, 15-minute demo answers a lot of my questions and concerns regarding the remake's battle system and game dynamics — suddenly all that talk of active time battle gauges, abilities, staggering and player switching made much more sense. Square Enix laid up the demo in a smart fashion, kicking things off with a video to explain how the aforementioned combat system, all led by one of the game's minor characters.

FF7R attempts to straddle the sudden battle dynamics of Kingdom Hearts or Final Fantasy XV and the slower paced menu-led "active time battle" system of earlier FF games and the original FF7. I was a little confused by Square Enix's explanation during its E3 showcase last night. The system seemed overly complicated; as if I would be pressing several buttons nearly all the time. Yes, it's more involved than the game it's based on, but once you get down to it, it begins to work together pretty well.

No one really wants to be digging into menus as they fight enemies, but FF7R tries to segue into them with a slick almost-paused time slowdown. This is Tactical Mode, where you access your spells and abilities. The latter seems to encompass character buffs, area of effect attacks and stronger one-hit wonders.

To access Tactical Mode, you'll need press X after filling up active time battle gauges through standard attacks, connected to the square button. Each character's weapon behaves differently: Barret's long-range gun can auto-attack if you hold down the button, while Cloud's attacks are press-by-press, taking more time and keeping guard and evasion options available as you slash away.

Your team can defend, but can also evade through circle presses, or simply steering the character out of the way. Barret and Cloud aren't particularly agile, however. Hopefully, future characters might be a little more nimble. Speaking of your team, you can switch between them at any time, and even bark special attack (or magic) commands through the collar buttons. If you're controlling Cloud, but Barret's ready to cut loose, it's easy enough to do without switching to the gun-wielder.

When you do swap characters, the game does a slick camera pan between them. I'm not sure why this is important, but it just added to the polish and cinematic feel of the battles. In Final Fantasy XV, perhaps the closest FF game you can compare this to, while you leveled up your comrades and assigned equipment and abilities, you never got to take control of them directly (unless it was in the later updates). This feels much better.

Battles are further complicated by a stagger gauge that allows you to increase damage to your foes by stacking attacks and strong effects. There're also Limit Breaks, too. These special, heavy-hitting attacks are unleashed once a slowly growing gauge fills up. You'll be using these a lot less frequently, but they can often save your ass, or finish off a boss. 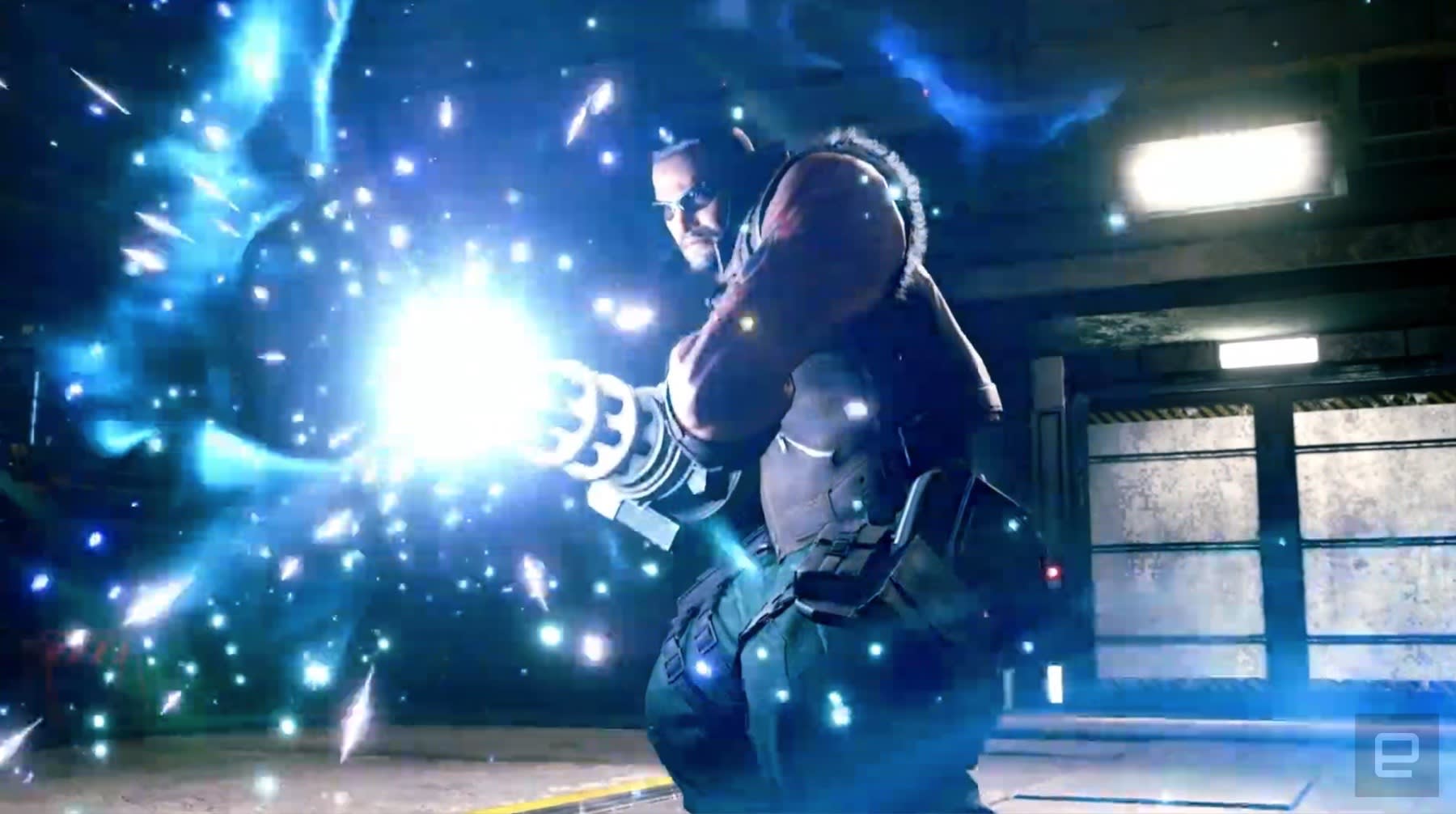 And boy, it really is polished. Well, polished then covered in a layer of soot and grease. Cloud's iconic, anachronistic anime hair struggles to stay spikey at such high resolutions, which is probably the only graphical letdown I can remember from my playtime. The aliasing effect seems to persist across different parts of the game, adding a kind-of hatching effect that's growing on me. The characters are realistic, yes, but not hyper-realistic. There's some kind of artistic texture to everything.

After several brawls against Shinra goons and a few security drones, Cloud and Barret reach the depths of the reactor and get blindsided by the scorpion robot from the opening act of the original game. With a rear-mounted laser, a bunch of missiles and the fact that it's a giant robot, it was a great showcase as to how the entire battle system came together. Blocking is important; don't burn through all your ATB gauges because you might need to heal soon; Barret is a better character for attacking a robot on the run; Cloud is your heavy-hitter. The boss battle was entertaining without being too punishing. (I know it's a demo, but the earlier small fry battles were so easy I still barely grasped the battle dynamics ahead of the boss fight.)

Outside of battles, there wasn't much to report. Cloud can run around the environment, even sprinting. He can slide down ladders, smash up boxes for hidden items and talk to NPCs. That's pretty much the extent of the interactions in this E3 demo. I wonder how a game that had some many characters and interactive parts all crammed together will expand in this remake.

There's a lot of Final Fantasy XV DNA on show here, but the team has still kept the game incredibly faithful to the PlayStation original. Enemies match their original designs, even the Mako reactor that makes up the demo roughly translates to the static CGI screens of 20 years. I'm more confident that Square Enix can make this work, but can it maintain the thrill of boss battles across the whole game? With the promise of this episodic production taking up two Blu-rays, it's an incredibly dense, ambitious project. Hopefully, it all comes together next March.