Even though Oppo isn't as well-known in the US, chances are you might have come across one of its recent tech demos. This is the brand that brought us the pop-up camera wedge, periscope-based 10x hybrid zoom, under-screen camera, waterfall screen and 65W fast charging, among other things. But when it comes to design, it was the company's Find X which first stood out with its super minimalistic appearance, courtesy of its hidden cameras. It was definitely a one-of-a-kind smartphone. So naturally, phone nerds such as myself have high expectations for its successor, the Find X2 Pro, which is pitched as an "all-round 5G flagship."

The first thing you'll notice about the Find X2 Pro is that it has a somewhat plain appearance compared to the legendary Find X. There are no hidden pop-up cameras; instead you'll find three of them lined up on the back. There's also a punch-hole camera at the top left corner of the curved screen.

Admittedly, the Find X2 Pro's design didn't surprise me as much as its predecessor's, but that's not to say it's bad. The phone comes in black ceramic or orange vegan leather with a rose gold frame (China gets a grey vegan leather edition, too). Personally, I prefer the masculine ceramic edition. The back is etched with fine curvy lines, which form a wave pattern when you tilt it under the light. The downside, though, is that this glossy surface picks up fingerprints. 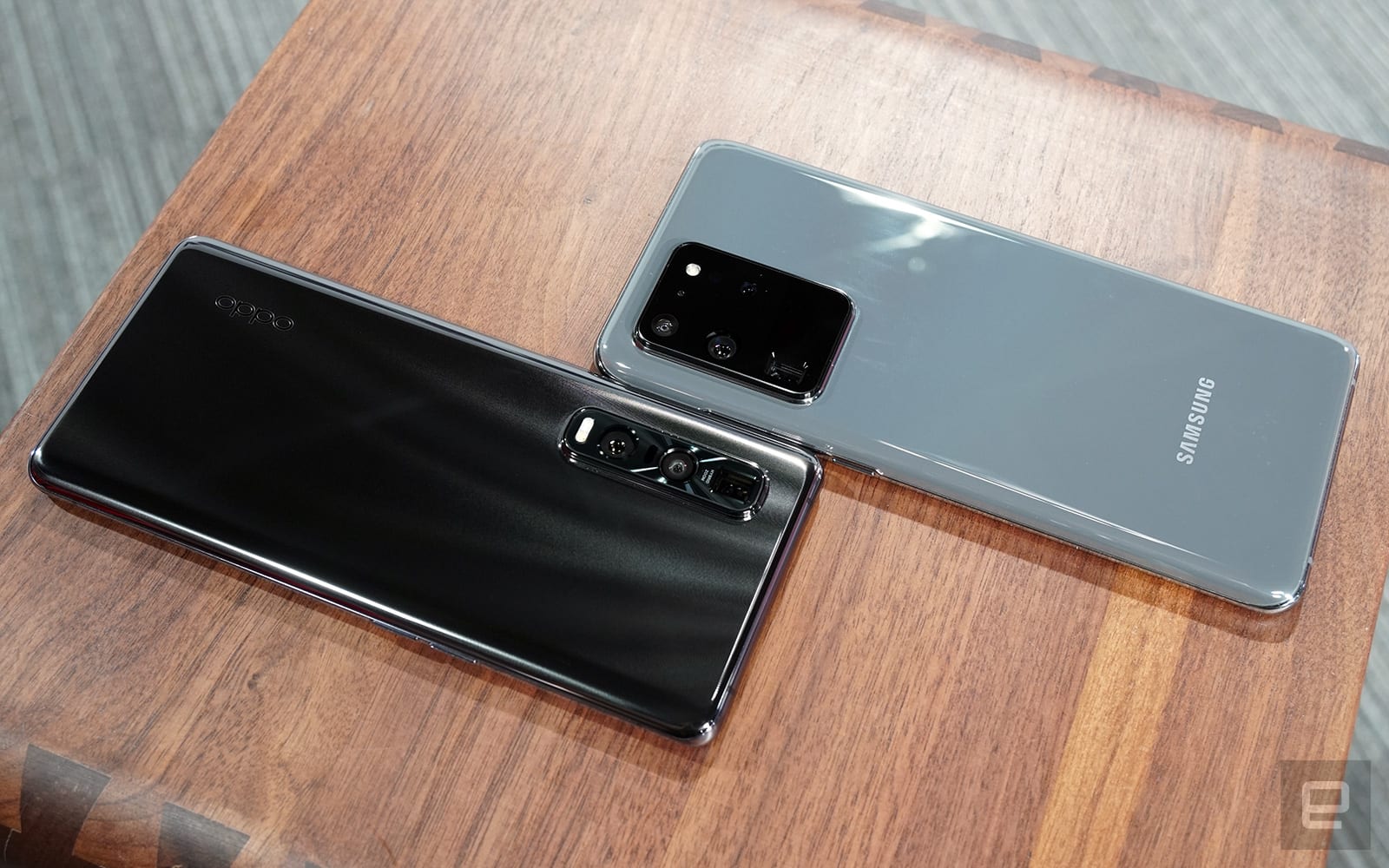 People used to the likes of regular-sized phones -- the iPhone 11 Pro, Galaxy S20+ or smaller -- may find the 207-gram (7.3-ounce) Find X2 Pro a little heavy. (The leather edition weighs 7 grams less.) That said, it's still lighter than the likes of S20 Ultra and iPhone 11 Pro Max. For me, the Find X2 Pro feels just right for its size, weight and build quality.

What truly makes the Find X2 Pro stand out from the crowd is its 65W SuperVOOC 2.0 flash charge, making it the third device to benefit from Oppo's handy feature after the Reno Ace and Realme's X50 Pro. In this case, it takes 38 minutes to juice up that 4,260mAh battery, which is quite fast considering how other flagships take about an hour or more for a full charge. Another benefit of VOOC is that the phone doesn't heat up that much while charging, so it's totally fine to use it while plugged in. 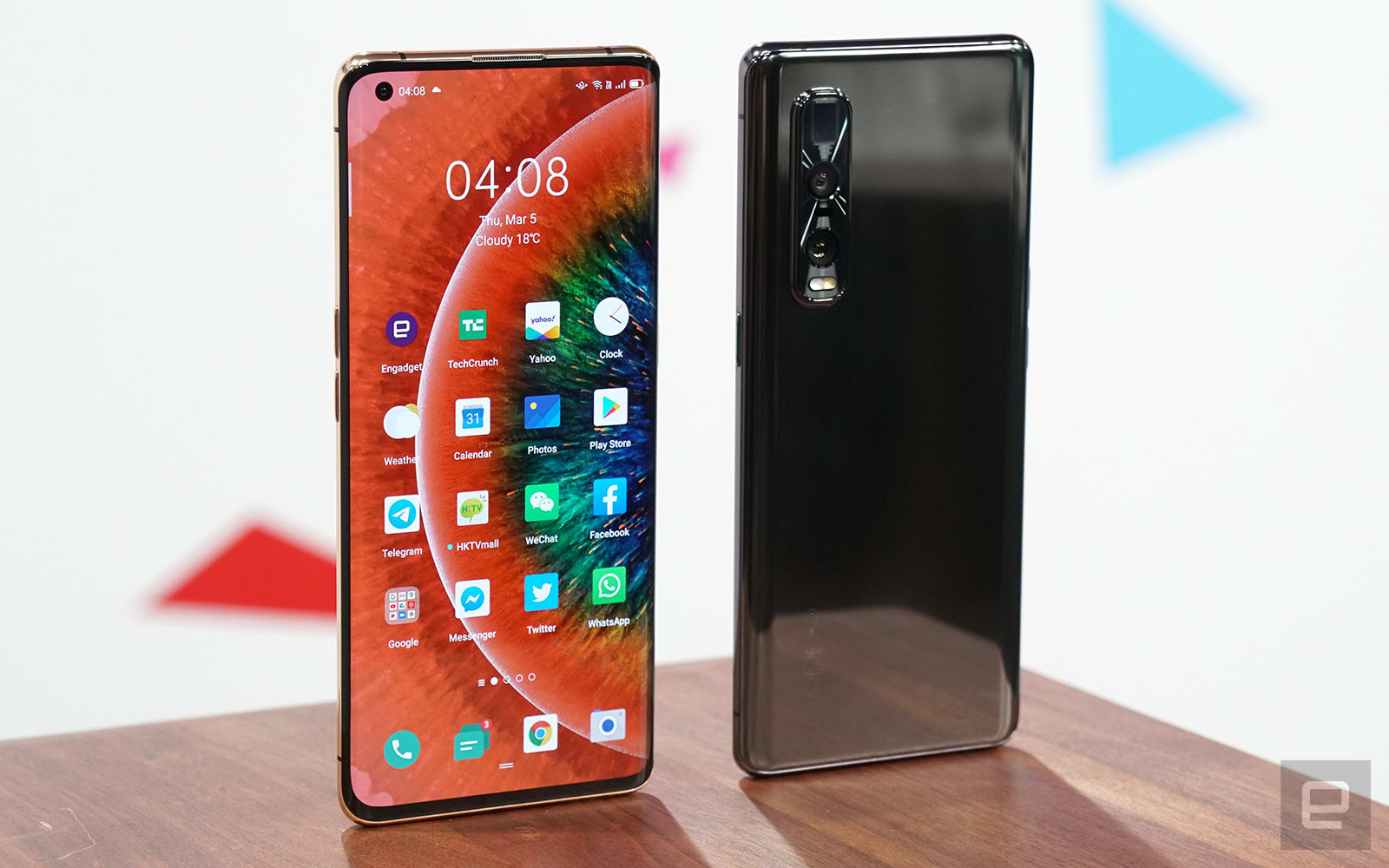 This new Oppo phone has all the guts you'd expect from a 5G flagship. There's a Qualcomm Snapdragon 865 chipset, 12GB of LPDDR5 RAM, 512GB of storage, in-display fingerprint reader, Dolby Atmos stereo speakers and triple-mic noise cancellation. It also packs a 6.7-inch Quad HD+ (3,168 x 1,440) AMOLED screen with an impressive 120Hz refresh rate -- a rare combination in today's market. With the periscope telephoto camera on the back, the Find X2 Pro is basically the Galaxy S20 Ultra's brother from another mother.

The imaging similarities end there, as the Find X2 Pro has a totally different set of camera sensors. While the telephoto camera here also offers 10x hybrid zoom (16mm-160mm), it uses a 13-megapixel sensor with f/3.0 aperture and optical stabilization. The app switches to this camera for 5x zoom (optical) and beyond (hybrid). You can push all the way to 60x zoom if you really want to, but you're not going to get anything Instagram-worthy.

As for the 48-megapixel f/1.7 main camera, it's powered by Sony's new IMX689 sensor, which offers "All Pixel Omni-Directional PDAF (phase-detection autofocus)." In a nutshell, rather than using just 3 percent of the pixels to focus, here all the pixels take part in a faster and more reliable autofocus, especially in the dark. Additionally, there's optical stabilization plus laser autofocus, and these cameras can use the color sensors on both sides of the phone for more accurate brightness and color temperature measurements. The main camera also does 12-bit RAW capture for greater color depth, which Oppo claims is a first for smartphones. 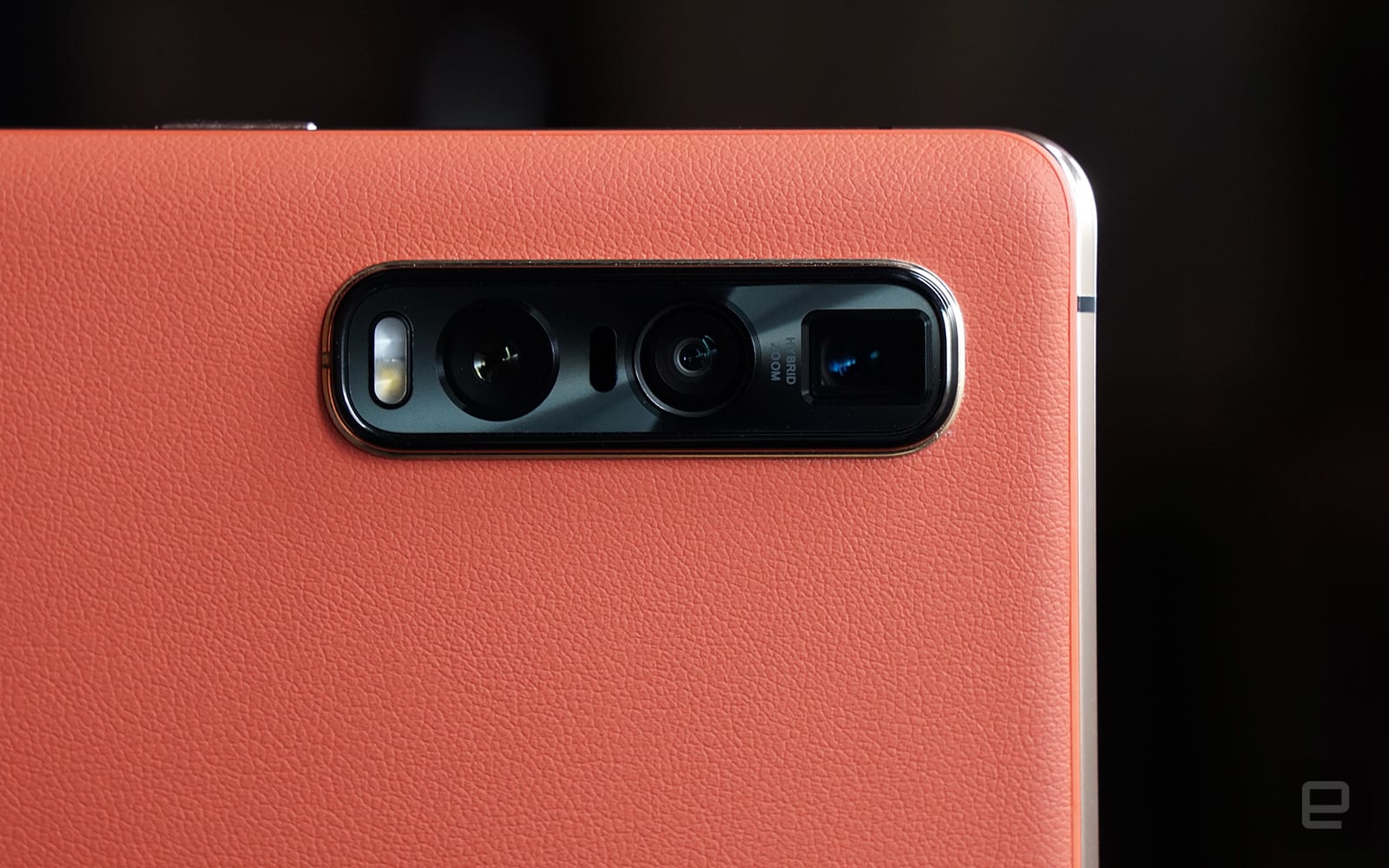 The last of the rear cameras is a 48-megapixel f/2.2 ultra-wide camera with a 120-degree field of view. It can also be used to take macro shots at down to 3cm, as well as offering extra stabilization for video capture. Much like the S20 Ultra, the Find X2 Pro's rear cameras can make use of the triple microphones, which are enhanced by Nokia's OZO Audio to offer 3D audio, audio zoom and audio windscreen features. But unlike the Samsung, Oppo's cameras can't do 8K recording -- just up to 4K at 60fps.

On the other side, there's a 32-megapixel f/2.4 selfie camera punched into the top-left corner of the screen. Here you get the usual beautification options, as well as screen flash and gesture control. It also does 1080p video capture at 30fps.

An Oppo spokesperson told me that the rear cameras here were built based on the learnings of the earlier Reno 10x Zoom, which also had a periscope camera. The company claims that we'll see better uniformity across all three cameras, especially when it comes to auto white balance, HDR photography and the new Ultra Night Mode -- this is sometimes an issue for smartphones packing so many different camera sensors.

I asked Oppo why the company chose to ditch the Find X's legendary pop-up cameras, and the reason was partly about achieving an IP68 dustproof plus waterproof rating. Also, the design team wanted a camera module small enough that it wouldn't call too much attention to itself. Fair enough. And of course, the fewer mechanical parts there are, the less wear and tear users will have to worry about in the long run. 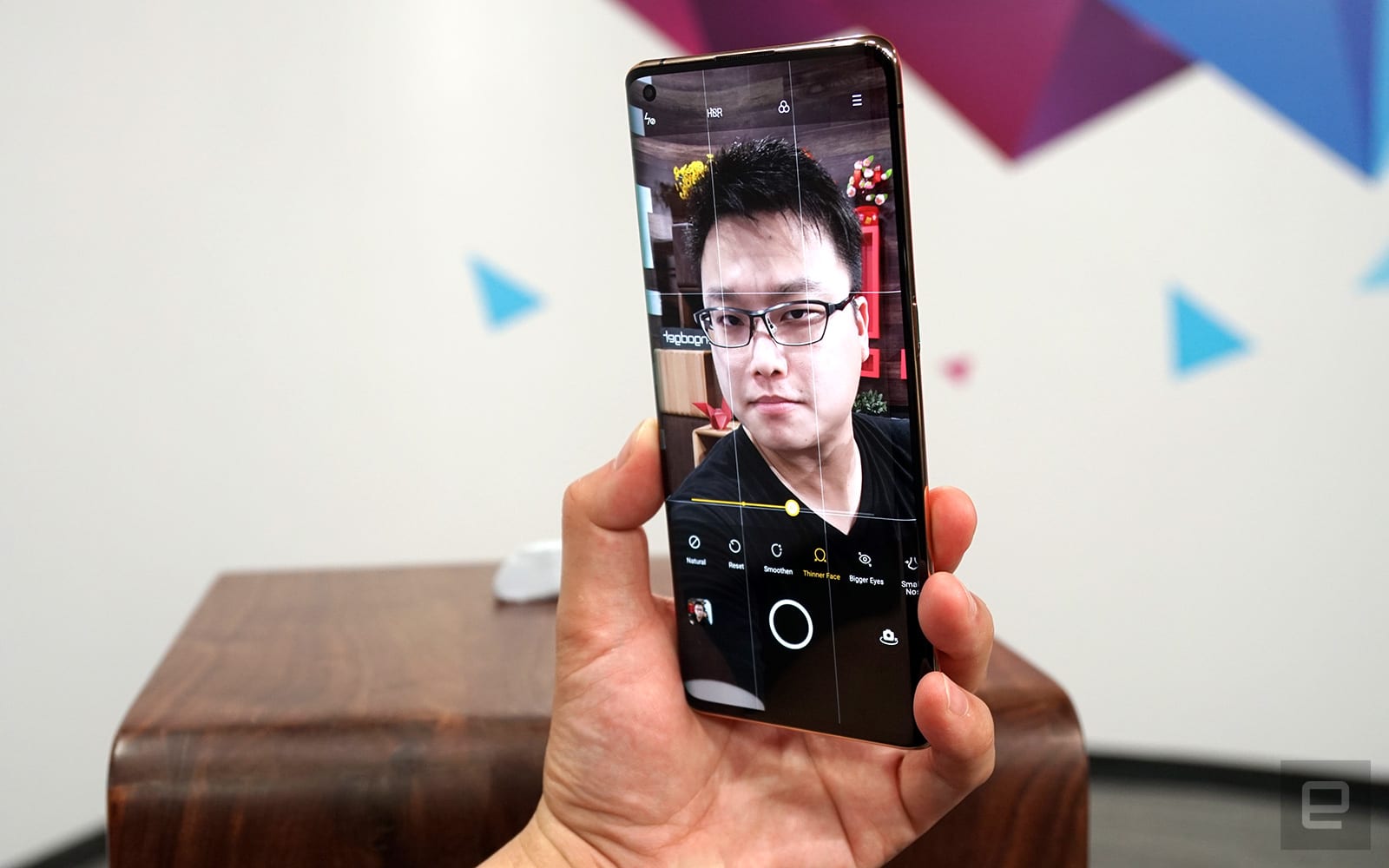 To help show off the Find X2 Pro's photography prowess, Oppo picked this particular "True Billion Color Display" from Samsung. The panel's 8+2 bit color depth means it delivers 64 times more colors than conventional 8-bit displays. Oppo also worked with color tuning experts to add screen calibration process -- an extra 20 seconds for each device -- to the Find X2 Pro's production line, in order to ensure a low JNCD (Just Noticeable Color Difference) ratio of no greater than 0.8 in default display mode. As phone nerds might know, this is the same standard that OnePlus teased for its upcoming smartphone, which isn't surprising given that Oppo does the manufacturing for it.

Oppo also added a clever trick to accurately control the screen's brightness and color temperature. Rather than relying on a single sensor, the Find X2 Pro uses the color sensors for both sets of cameras for 360-degree detection. This means the screen will less likely jump to maximum brightness when you walk under a street light at night. Additionally, the system will also learn your brightness preferences according to the current app and sensor data and automatically adjust for you in the future. 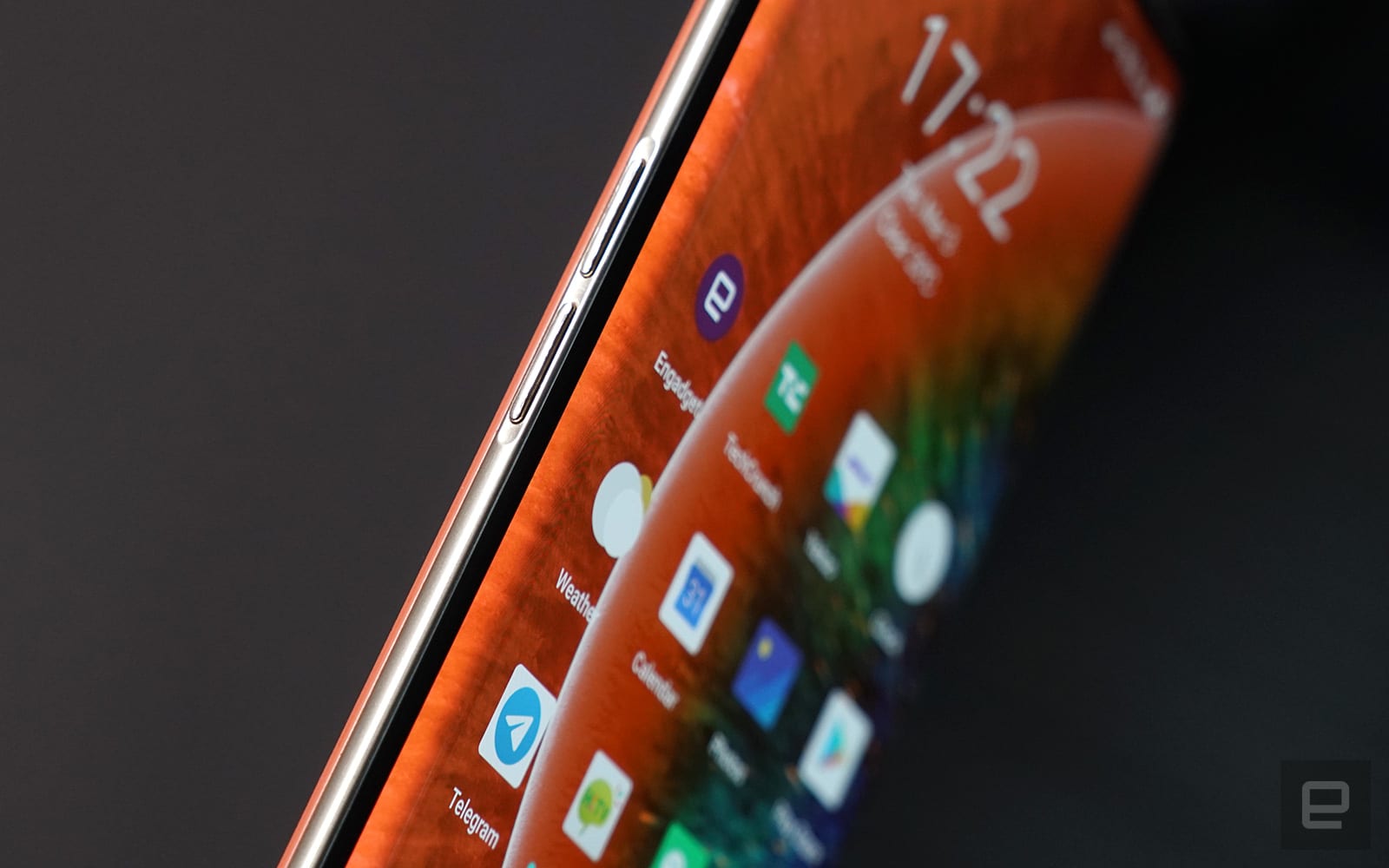 To further leverage this 120Hz, HDR10+ display, Oppo added a proprietary feature called the O1 Ultra Vision Engine, which is mainly for upscaling to HDR and boosting frame rate in video playback (you can toggle these two features individually). While I appreciate the HDR upscaling option, I find that this engine isn't necessary for most clips; in fact, artificially boosting the frame rate appears to reduce the sharpness slightly. In response, Oppo claims "the smoothness matters the most" for our overall viewing experience, and recommends trying this engine with action sequences with a frame rate of under 30fps.

Oppo is also taking full advantage of this 120Hz screen with its revamped, more lightweight ColorOS, based on Android 10. I'm liking it so far. The interface looks clean and the animations feel smooth, so much that it actually reminds me of the latest OnePlus phones, which isn't a bad thing.

As a finishing touch on the UX, Oppo equipped the phone with a custom X-axis linear motor for vibration functions, which the company claims is the largest of its kind amongst Android phones. Compared to most other phones I've come across, the vibration here feels crisper, which is great for typing and gaming -- I could really feel the difference. 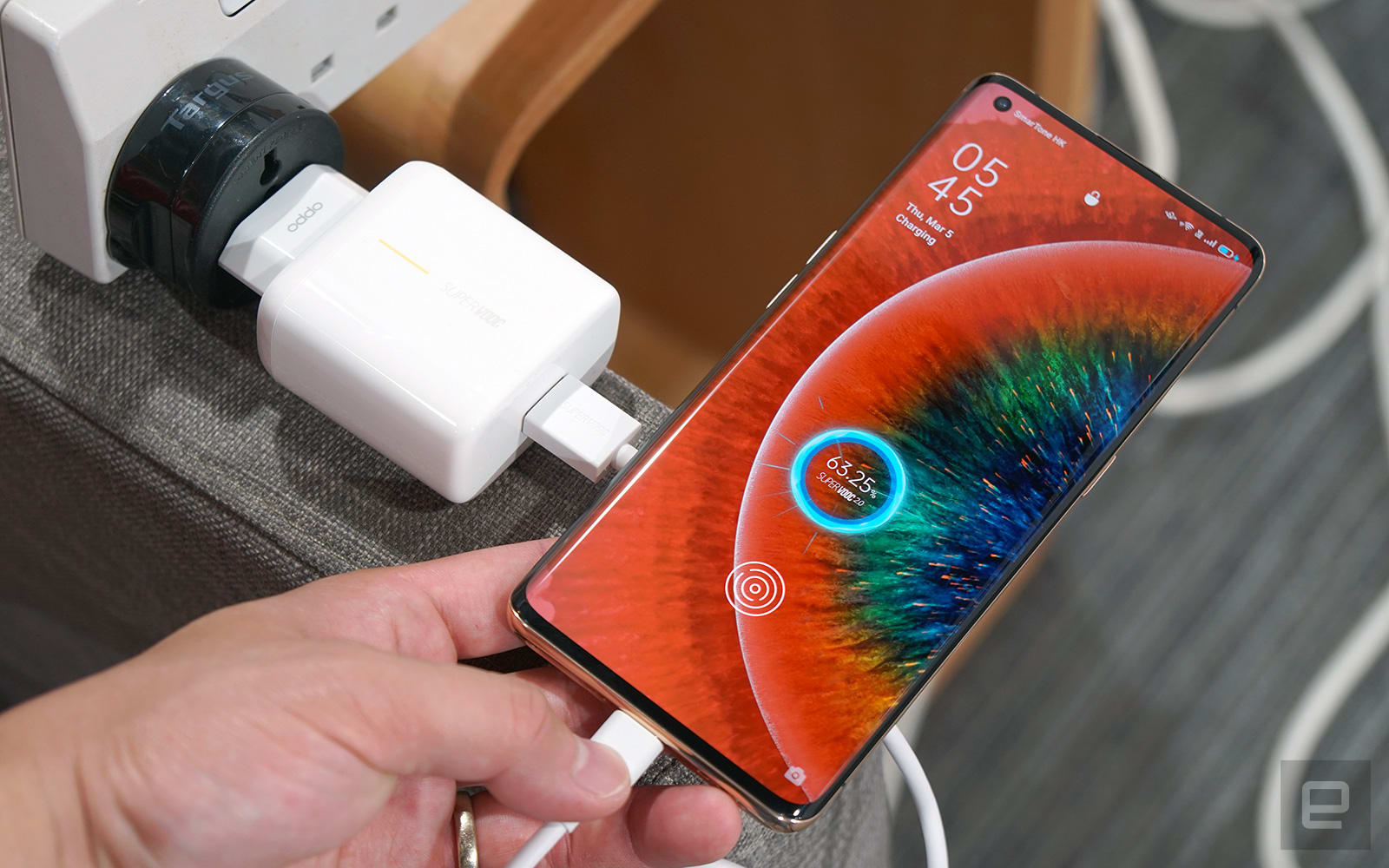 If you've been wondering why there's a "Pro" in the name, there is indeed a "regular" Find X2 as well. It'll obviously be cheaper, but you'll mainly be missing out on the camera specs. The periscope telephoto camera is replaced with a fixed telephoto shooter, and the main camera uses an older 48-megapixel sensor (it's the same IMX586 as the Pro's ultra-wide camera). While the ultra-wide camera here only shoots 12 megapixels, it's actually powered by Sony's new IMX708 sensor, which makes up with native 16:9 capture and 4-in-1 pixel binning. You also only get 256GB of storage, the more common Z-axis vibration motor, a lower protection rating of IP54 and a choice of either ceramic or glass only. The rest is pretty much the same, though.

Alen Wu, Oppo's President of Global Sales, told me that there are no plans to bring the Find X2 series to the US, which isn't surprising given that the company has yet to properly enter the US smartphone market. He added that much of his company's focus in the West is in European countries like France, Italy, Spain, UK and more, all of which roughly doubled in sales growth in 2019. And for the first time, sales outside China accounted for more than half of Oppo's total numbers last year. As for 2020, Oppo will be making its Latin America debut in Mexico. One step closer to the brand's eventual arrival in the US? 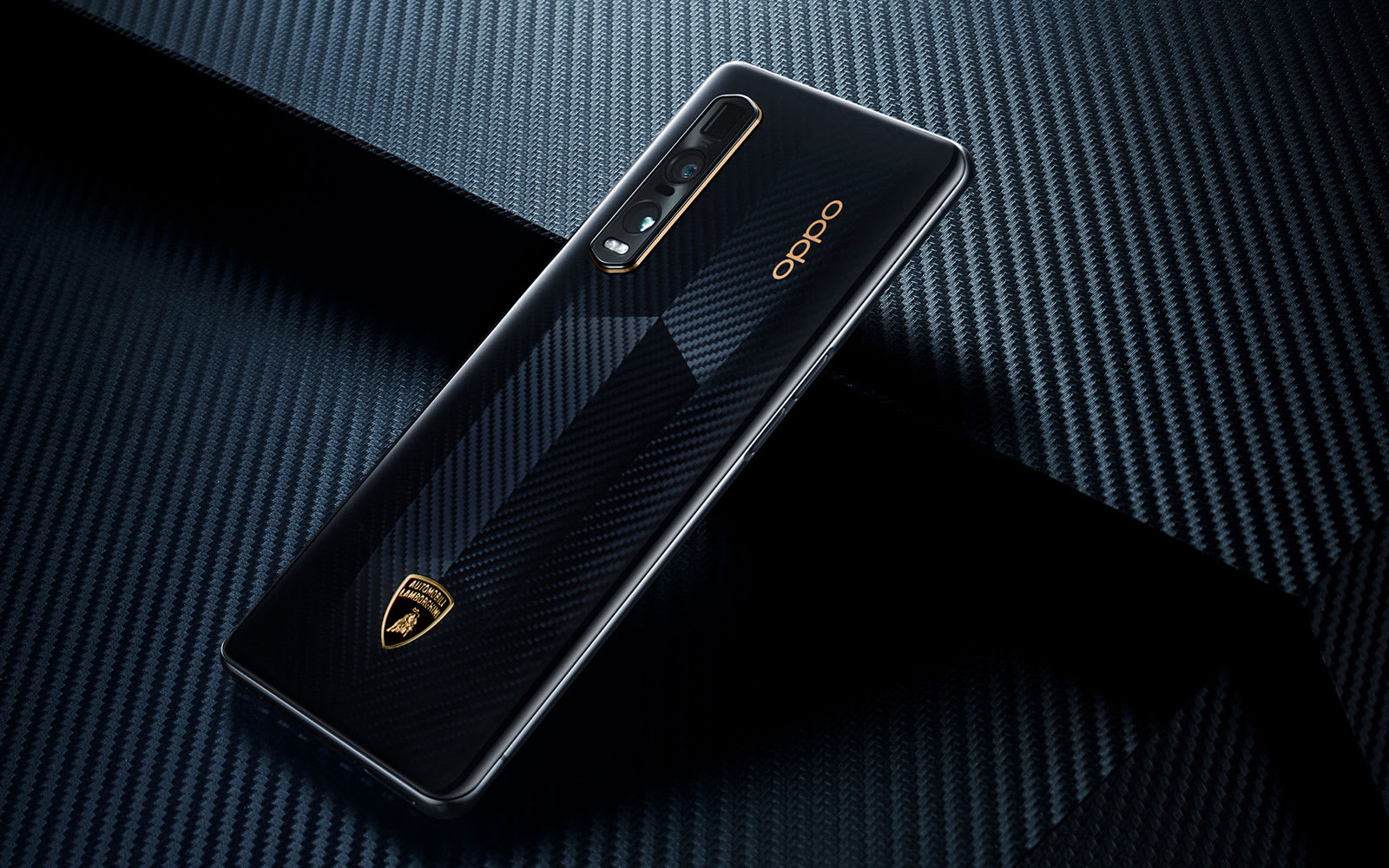 With the exception of the Lamborghini edition, the Find X2 series will be available in Europe from as soon as early May.