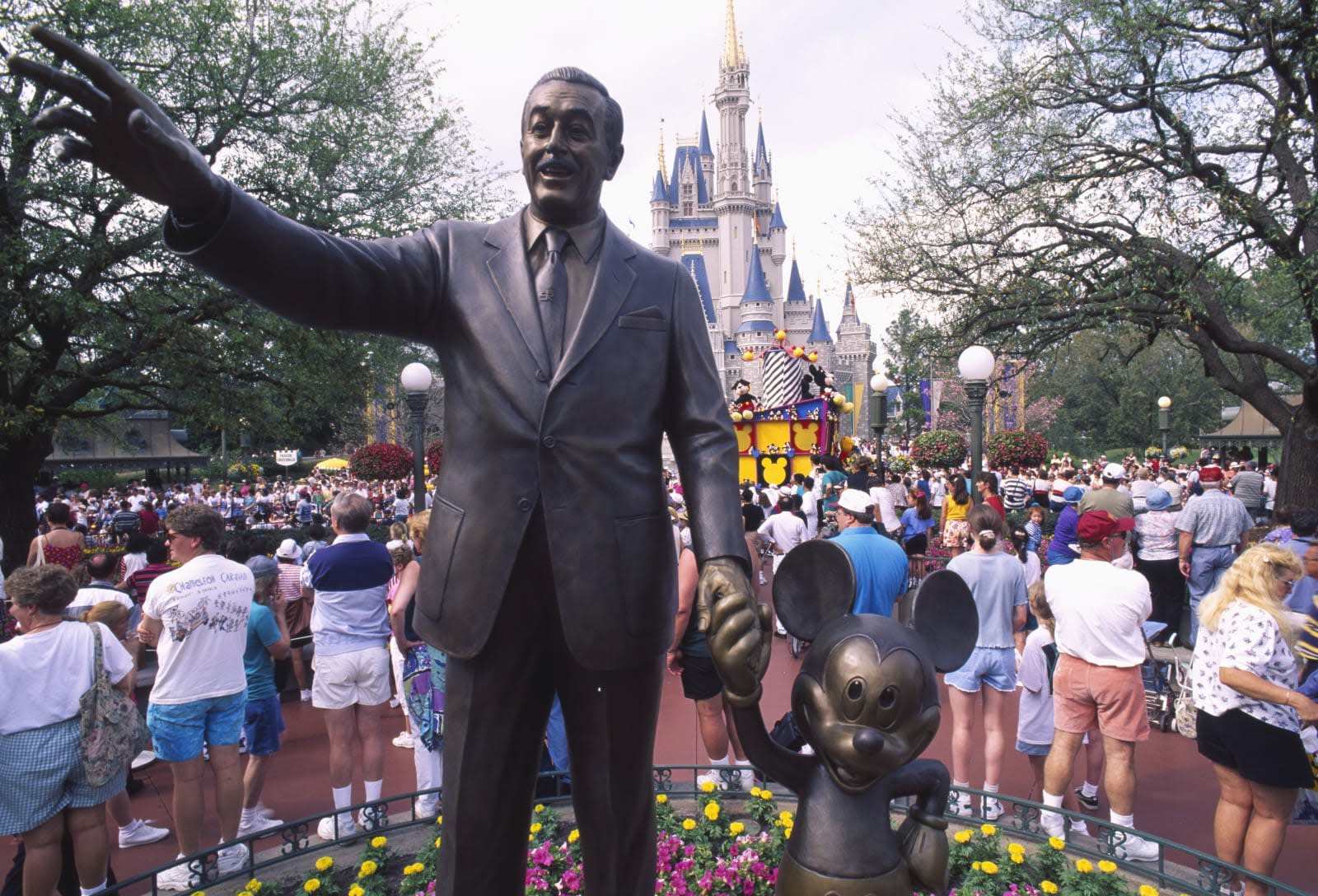 If you has any interest in aircraft in the 1950s, Southern California was the place to be. Blessed (at the time at least) with ample open space for airfields and manufacturing plants, a cadre of advanced research institutes and elite universities like CalTech, as well as the backing of local governments and business leaders, SoCal was a post-war aerospace hub that drew talented engineers from around the country.

The Walt Disney Company enjoyed a unique relationship with that burgeoning production base, as well as the existing defense industry. The company both benefitted from technology developed for war effort and indirectly contributed to the advent of modern stealth aircraft, as author Peter Westwick explains.

His latest title, Stealth: The Secret Contest to Invent Invisible Aircraft delves into the high-stakes, low-radar cross section competition between Boeing and Lockheed in their race to land a massive Pentagon contract and revolutionize America's air combat capability.

Some of Disney's technical innovations came from California's defense industry. Disney hired Stanford Research Institute, a defense-oriented think tank, to choose the park's site and plan its layout, and Disneyland's robot animatronics, for instance in the Enchanted Tiki Room, were controlled by a magnetic tape system originally developed for the Polaris submarine missile, for which Disney licensed the patent. Another quintessential Californian, Ray Bradbury, in a 1965 article titled "The Machine-Tooled Happyland," marveled at these animatronics and called Disney and his park the "prime movers of our age." One of Disneyland's main attractions, Tomorrowland, symbolized faith in aerospace, especially its centerpiece ride, the Rocket to the Moon. A later Tomorrowland exhibit, the Carousel of Progress, opened in 1967 under the sponsorship of General Electric, which would soon build the engines for both the F-117 and B-2.

There was, in fact, a more direct Disney connection to Stealth. It came in the person of Richard Scherrer, who combined Disneyland and aerospace with another typically California pursuit, hot rods. Scherrer was born and raised in Seattle; his father spent time in prison for his role as a driver and mechanic for rumrunners and apparently passed on his mechanical ability to his son. Scherrer, like many other future engineers, built model airplanes as a youth, and in junior high school he had a job running a punch press making parts of model planes. That job led eventually to shop-floor jobs at Boeing, in between stints at the University of Washington. He apparently also inherited his father's love of fast cars; he dropped out of college at one point "due to some foolish expenses," he recalled, "including a 1938 Lincoln-Zephyr V-12 Coupe." He eventually graduated in 1942 with a degree in aeronautical engineering and went to work for the Ames Research Center, a lab run by the National Advisory Committee for Aeronautics (the forerunner to NASA) in Mountain View, south of San Francisco.

In the early 1950s Scherrer was working at Ames and goofing around with hot rods -- this was, after all, the hot-rod heyday later celebrated by the Beach Boys and "American Graffiti." It is no accident that hot-rods became a particular symbol of California just at the time the aerospace industry took off. Many California hot-rodders were young aerospace engineers who spent their weekends tinkering in garages with custom camshafts and exhaust manifolds. One of them was Scherrer, who was building a sports car with some buddies and looking around for a place to do the welding. He found it at the Arrow Development Company, a machine shop near Ames in Mountain View, so he started hanging around the shop while working
on his car.

The Arrow shop was run by Ed Morgan and Karl Bacon, a couple of mechanical geniuses of a type common to midcentury America; they could seemingly fix or build anything. In the early 1950s they had gotten a job making some playground equipment, which led to work on a merry-go-round, then a miniature train ride, and eventually to a contract from Disneyland making the cars for Mr. Toad's Wild Ride. That led to a long association with Disney, for whom they built some of the canonical early Disneyland rides.

Bacon and Morgan recognized a kindred spirit in the young Scherrer and recruited him to help with the engineering on the Disney jobs. Scherrer agreed, moonlighting at Arrow for several years while working his regular job at Ames, trying to keep his Ames bosses in the dark despite mysterious phone calls. His Disney projects at Arrow included the Tea Cups, Dumbo the Flying Elephant, the Matterhorn, and the Flying Saucers.

Scherrer continued consulting for Arrow even after he took a new job in 1959 with Lockheed. The engineer who helped build the Flying Saucers for Disney's Tomorrowland would, less than twenty years later, help invent Stealth aircraft. In fact, Scherrer was the only major designer to work on Stealth at both Lockheed and Northrop, on both the F-117 and the B-2. Most engineers would say there is no connection. Engineering is purely about optimizing a machine for a particular function—whether that function is maximizing the fun on an amusement park ride or minimizing the radar signature of an airplane. But if engineers can help Dumbo take to the air, perhaps so, too, can they make some other far-out, blue-sky contraptions fly. And that was not the last connection between Disneyland and Stealth.

Disney provided an antidote to another vision of Los Angeles, one that was not clean, controlled, and conservative but rather disorderly, dirty, and dangerous. Southern California had long toggled between two opposing visions of the place. On the one hand, there was the sunshine state of palm trees and beaches, extraordinary technological creativity, and economic opportunity; on the other hand, a dark dystopia where the powerful exploited the underprivileged and plundered the environment, and violence lurked in the shadows.

The wonderful world of Disney against the cynicism of Chinatown. In short, sunshine versus noir. As much as Disney tried to banish this darker vision of California, it survived—and resurfaced just as Stealth was germinating. Southern California in the early 1970s no longer had the heady buzz of the space race. Even as astronauts were stepping onto the moon, delivered by rockets and spacecraft made in California, the
aerospace economy had stalled, like a rocket motor at apogee. It soon entered a tailspin, with a flaming trail of pink slips.

The downsizing actually started in the late 1960s, as NASA began ramping down from Apollo and the cost of the Vietnam War ate into new weapons development. Aviation Week, the industry's barometer, declared 1970 "the gloomiest year in decades," and the decline only steepened, finally bottoming out in 1972. From 1967 to 1972 LA aerospace firms shed over fifty thousand jobs, a third of the aerospace workforce.

Layoffs and cutbacks caused resentment to percolate through Southern California, amplifying the effects of a national recession and providing a rude awakening to the region after two decades of affluence. To economic woes one could add traffic on the freeways, smog in the air, racial tension, drug abuse, and a general hangover of anxiety. Anti-military attitudes prompted by the Vietnam War further stressed the region's defense industry. The turmoil reached even the suburban sanctuary of Disneyland, where in summer 1970 a group of three hundred antiwar protesters overran security and raised a Viet Cong flag on Tom Sawyer's Island.

Far from the utopian visions of just a few years earlier, Los Angeles was becoming synonymous with dystopia, soon represented in movies such as Blade Runner and The Terminator. A 1972 book entitled California: The Vanishing Dream identified a "crisis" in the Golden State. In 1977 Time magazine, retreating from its previous sunny outlook, asked in a headline, "Whatever happened to California?" The article answered, "Everyone agrees that the California of the '60s, a mystical land of abundance and affluence, vanished some time in the '70s.... California has clearly lost the magic it once had."

California had only misplaced the magic, not lost it altogether. Southern California had long gotten used to the boom-and-bust cycles of aerospace: the golden age of Lindbergh and Earhart gave way to the Great Depression, and World War II's vast mobilization evaporated after the war's end. The early 1970s were indeed dark days for Southern California, but sunny days soon returned—in part because, amid the desperation, a handful of engineers thought they knew how to build an airplane with a radar signature ten thousand times smaller than that of existing planes. And those enterprising engineers worked in two firms based about twenty miles apart across the LA basin. In a land of make-believe, if you believe it, you can make it.

In this article: aircraft, boeing, column, design, hitting the books, hittingthebooks, LockheedMartin, military, OxfordUniversityPress, peter westwick, stealth, tomorrow
All products recommended by Engadget are selected by our editorial team, independent of our parent company. Some of our stories include affiliate links. If you buy something through one of these links, we may earn an affiliate commission.