While AMD is winning over the workstation market, Intel still dominates laptop gaming. However, AMD aims to change that in a hurry with the Ryzen 9 4900HS and 4900H Zen 2 mobile processors, launching soon on laptops like the ASUS ROG Zephyrus G14. They pack eight cores and 16 threads, along with up to 8 cores of integrated Vega graphics, and run at overclocked speeds up to 4.4 GHz. Best of all, the 7-nanometer 4900HS chip consumes just 35 watts of power, boosting battery life for gaming and entertainment apps.

The latest H-series chips go a bit beyond what we've seen with AMD's 8-core 4800U mobile chips when it comes to overclocking, with clock speeds topping out at 4.4 Ghz, with base clocks at up to 3.3 GHz. At the same time, it packs the same powerful graphics performance. The 7-nanometer Vega engine already boosts integrated graphics performance by up to 59 percent per core, and the Ryzen 9 4900H/4900HS chips have eight cores, while the Ryzen 7 4800H has seven cores and the Ryzen 5 4600H 6 cores. 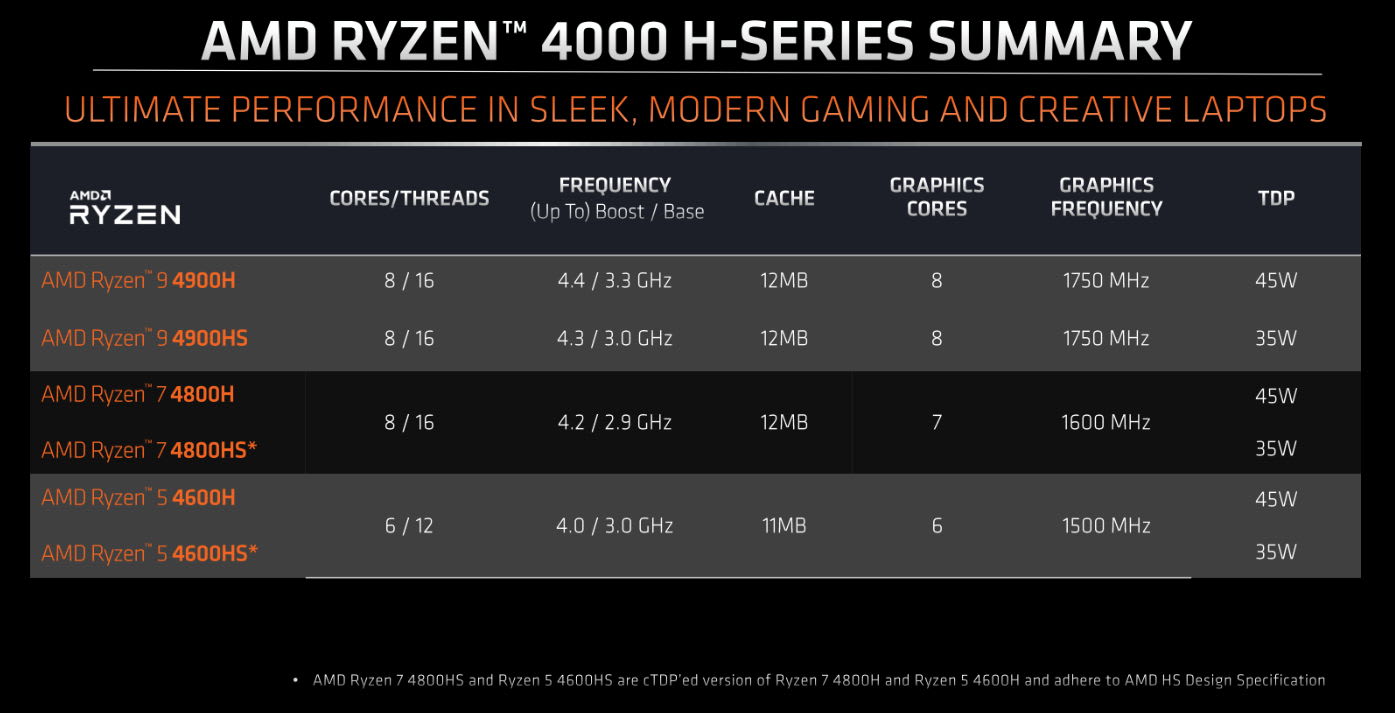 The Ryzen 9 4900HS chip comes in a 35 watt package (the slightly more powerful 4900H consumes 45 watts). However, AMD said that the chips deliver up to double the performance per watt compared to the 2nd-generation 12-nanometer chips, thanks to improvements in both the manufacturing technology and architecture. AMD said that the chips can also idle to lower power states and back to full power more quickly and "reduce the penalty of power state transitions."

AMD's platform control also makes the processors more efficient at distributing loads between the discreet graphics and processor. As a result, notebooks running AMD's 4000 H-series chips like the ASUS ROG Zephyrus Z14 will be able do up to 10 hours of video playback and let you game for longer, too.

AMD promised that the 4000 H-series Ryzen chips will arrive sometime in spring 2020, so we should see ASUS's ROG Zephyrus G14 laptop with Ryzen 4000 HS graphics around the same time. There's no word yet on any pricing nor an exact date, however, and coronavirus problems around the world could push back potential release dates.