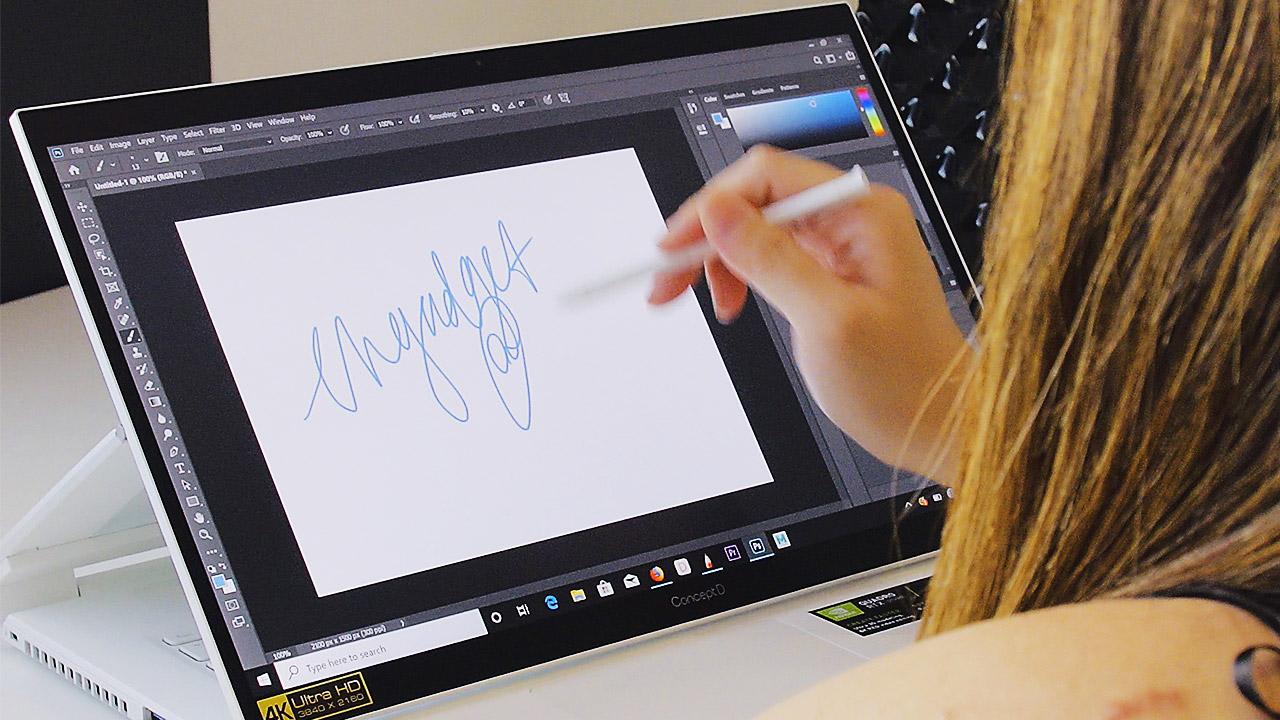 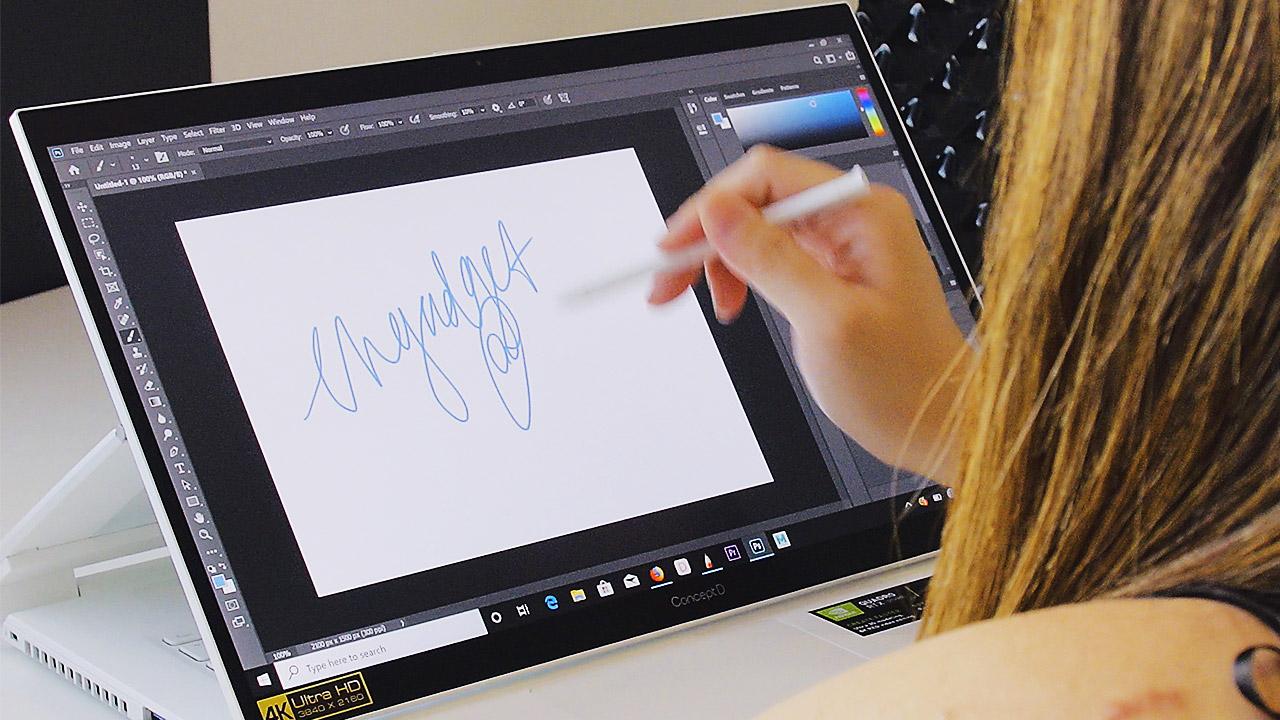 Acer has been expanding its ConceptD line of powerful, not-gaudy PCs made for creators, and at CES 2020 the company has a new pair of laptops to add to the family. The ConceptD 7 Ezel and ConceptD 7 Ezel Pro are NVIDIA RTX-powered machines in surprisingly sleek bodies, but they also feature new hinges that enable their displays to swing almost 360 degrees. This way, you can use them in five different modes -- sharing, floating, pad, display and stand.

Acer is no stranger to laptops with screen-spinning hinges. It uses a similar design in its other laptops like the ConceptD 9 and the Predator Triton 900. But the ConceptD 7 Ezels have the hinge stretch across the back of their lids, rather than at two points on the sides in the older laptops. Instead of having a sort of half picture frame surrounding the bottom half of the display, this new style leaves a thin panel behind when the screen is dislodged. It's a lot prettier than the chunky arms in previous iterations.

Some of the modes this allows should be familiar -- tent , for example, is when you flip the laptop with its screen facing out and prop it up on a surface to form a sort of triangle. Snap this shut and turn the ConceptD 7 Ezel into a tablet for "pad" mode, while opening it up with the display still on the outside for "display." Turn the panel around to face you for "stand" mode, which is when you use it like a normal laptop. Finally, you can pull the display towards you to rest just before the touchpad for "floating" mode, which enables easier interaction with the touchscreen.

It took me awhile to figure out how to unlatch the display from the lid to move it around, but once I did, I found the new hinge design pretty intuitive. Though the ConceptD laptops are impressively thin, the new Ezel 7 Pro that I played with was still quite heavy, which made rotating the screen all the way to the otherside quite cumbersome. I did enjoy how much easier it was to work on a sketch in floating mode, though, and I liked the anti-glare coating that make the screen look matte. 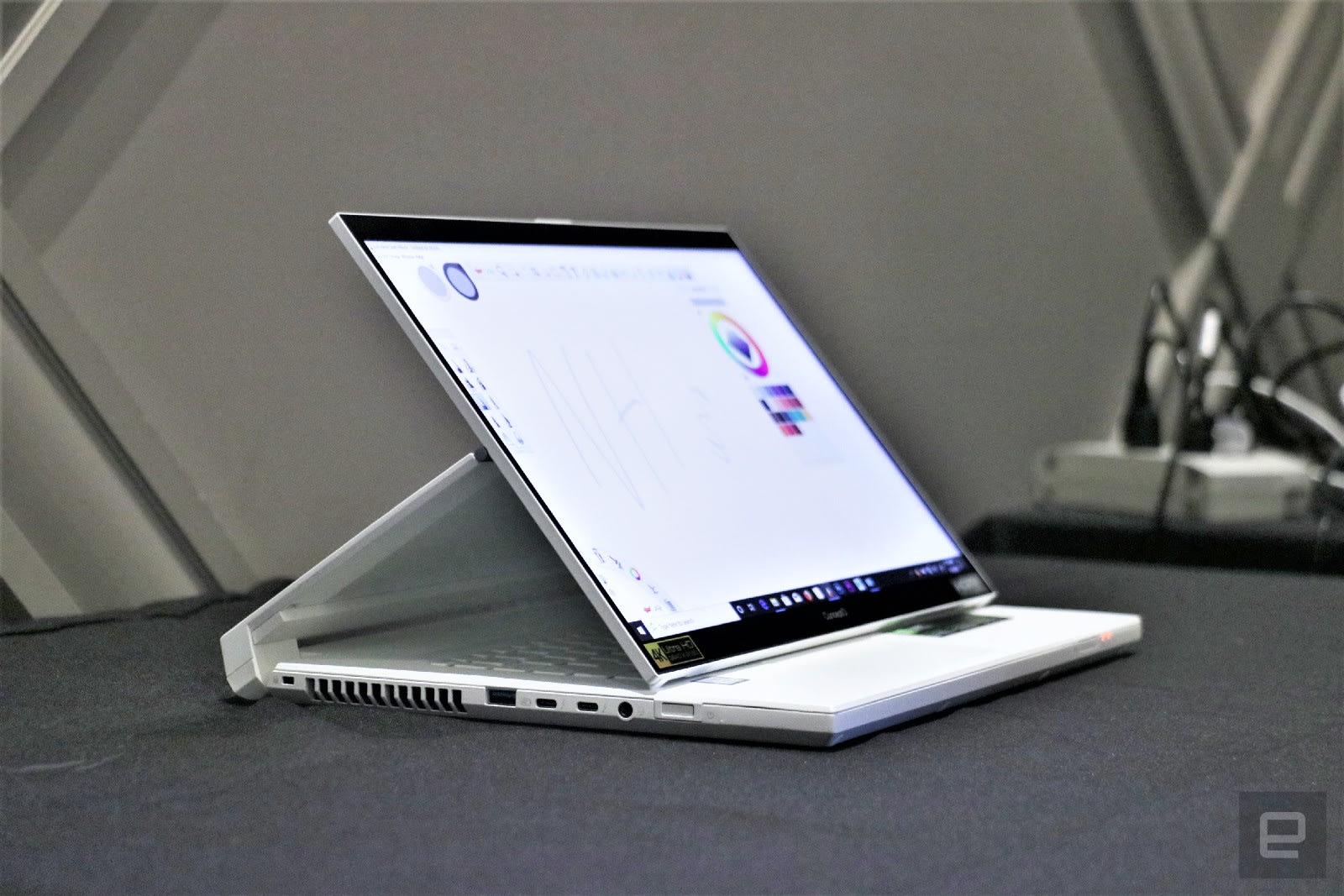 Speaking of, the ConceptD 7 Ezels come with Wacom EMR pens tucked away in a slot built into the bottom right of the hinge. You might miss it if you weren't looking for it, since the stylus is the same liquid paper-like white color and finish as the rest of the machine. Unlike the Wacom pens on previous Acer machines, this one doesn't require charging, and pulls power from the screen. I found it slightly less responsive than I'm used to on Samsung and Microsoft tablets, but it was still fluid enough for me to quickly sketch up a banner.

I'm not the sort of artist that Acer is targeting with the new Ezel series, though. Like the rest of the ConceptD line, these laptops are meant for creators who value colorful, accurate displays and a ton of power within a relatively stylish frame. The 7 Ezel and 7 Ezel Pro feature 15.6-inch Pantone-validated 4K touchscreens, with color accuracy ratings of less than 2 (the closer to 0 the better).

The primary difference between the standard 7 Ezel and the Pro lies in the graphics processors -- the regular version comes with NVIDIA's RTX 2060 or 2080 Ti cards, while the Pro models can come with the latest Quadro RTX Studio options. You'll also find Intel's 10th-generation processors in there, with the Pro getting up to Xeon chips, though Acer can't share exactly what models yet. Despite packing so much beef, the ConceptD 7 Ezels will run at less than 40 decibels of sound, since quiet fans are another point of focus of the made-for-creators line.

Acer is also rolling out a new ConceptD 700 workstation for those who need something more permanent on their desktops. It will offer Intel Xeon E processors and up to NVIDIA Quadro RTX 400 graphics for super powerful performance and feature a tri-fan cooling system with triangular-patterned front ventilation. Despite this, the ConceptD 700 will, like its siblings, run at less than 40 decibels loud, so you can maintain a quiet workplace.

Again, the ConceptD series is meant for a more demanding audience, and its price is correspondingly not for the faint-hearted. The ConceptD 7 Ezel will start at $2,699, while the Pro is from $3,099. Acer hasn't shared an exact timing for availability just yet, but you can look out for the new laptops in select retailers later this year.

Source: Acer
In this article: acer, acer conceptd 7, acer conceptd 7 ezel, acer conceptd 7 ezel pro, ces2020, gadgetry, gadgets, gear, personal computing, personalcomputing
All products recommended by Engadget are selected by our editorial team, independent of our parent company. Some of our stories include affiliate links. If you buy something through one of these links, we may earn an affiliate commission.