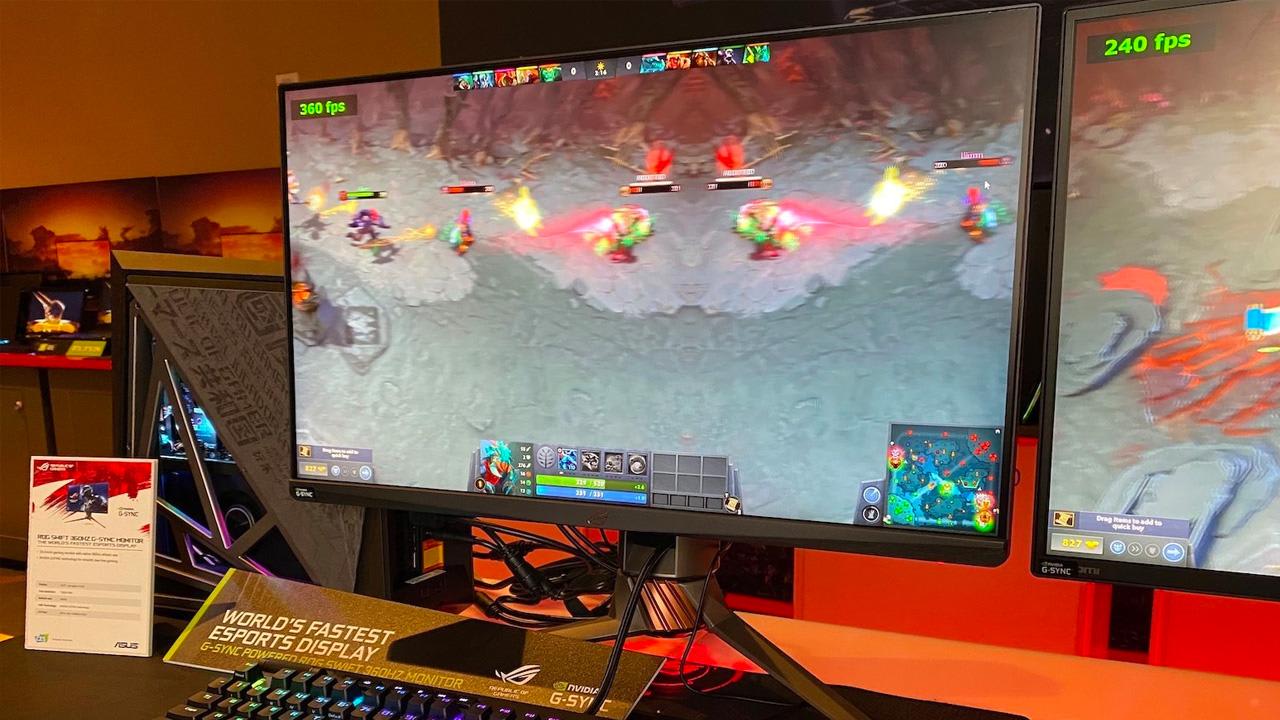 No one asked for it, but NVIDIA did it anyway. The company built a gaming monitor with a 360Hz refresh rate, meaning it updates frames once every 2.8 milliseconds. The ASUS ROG Swift 360Hz runs on NVIDIA's 360Hz and G-Sync technologies, and it's designed specifically for esports players and competitive-gaming fans.

Most gaming monitors max out at 240Hz, and honestly, the jump from there to 360Hz doesn't result in immense visual improvements -- just subtle ones. I tried out the ROG Swift 360Hz at CES 2020, completing a sniper challenge and headshot game in Counter-Strike: Global Offensive, and directly comparing a 240Hz monitor to the new model with a rapidly scrolling Dota map. On the 240Hz display, Dota player names were barely legible, and the letters bled together as they soared across the screen. At 360Hz, though, the names were clear.

The Counter-Strike set-ups hit 360Hz and 360FPS, and were incredibly smooth. I hit sniper shots that felt like sure misses, clipping the back edges of my target just before he popped out of sight. With a higher refresh rate, animations appear sooner, giving players more time to get the shot.

That's especially important for esports pros. With dozens of tournaments shelling out millions each year and a steady flow of high-dollar sponsorship deals, esports has grown into an established industry where skilled players can make money, hone their talent and build a long-term career. Considering a majority of pros are under the age of 30 -- and some are still in high school -- the career-building part of that equation is crucial.

NVIDIA says the 360Hz refresh rate offers a jump of 4 percentage points in flick shot accuracy, when compared with a 240Hz display. Everyday players likely won't notice an improvement that miniscule, but for the folks playing games at their highest levels, 4 percent could be the difference between a fat payout and an unrenewed contract.

The ROG Swift 360Hz is 24.5 inches and its resolution is capped at 1080p. An NVIDIA spokesperson said the company prioritized refresh and frame rates over resolution because its research on whether 4K improves pro play has been inconclusive so far.

In this article: 360hz, asus, asus rog swift 360, av, ces2020, esports, gaming, nvidia, personal computing, personalcomputing
All products recommended by Engadget are selected by our editorial team, independent of our parent company. Some of our stories include affiliate links. If you buy something through one of these links, we may earn an affiliate commission.