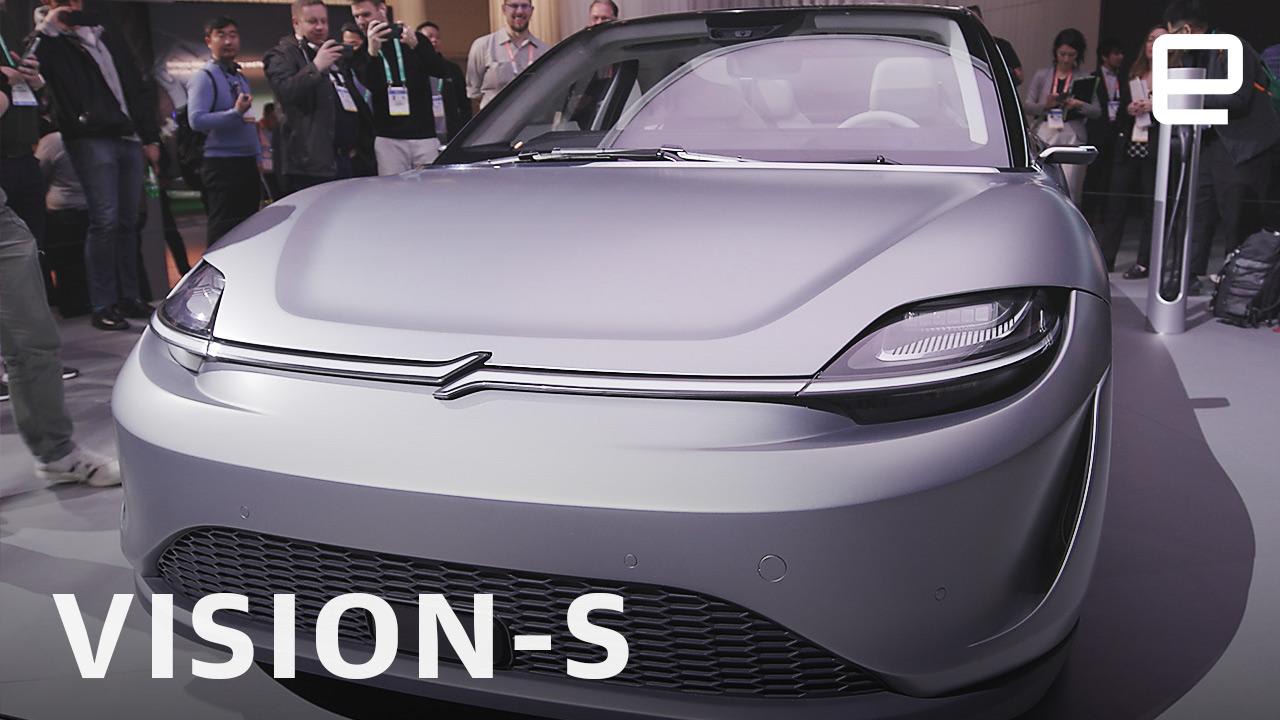 It's a miracle Sony was able to keep its electric car concept under wraps ahead of CES. In an age of leaks (and given that over ten different companies collaborated with Sony), it's an impressive feat. And the Vision-S prototype, up close, is more put-together than you might expect. I got to sit inside Sony's sales pitch for the automotive industry. The message seemed to be: "We can do cool stuff. Work with us."

The car isn't meant for use on public roads, but we know it can be driven. It's been tested, and briefly cruised onto the stage during Sony's CES press conference earlier this week. According to Sony's Tatsuya Koeda, the next stage in the development of Vision-S is to figure out how the autonomous driving systems, safety features and even the in-car entertainment array, fare in the real world?

Step inside the Sony car and it feels and looks like a luxury sedan. The inside, with a row of screens across the dash, looks like a car from a startup like Lucid Motors. In contrast, the outside is like a Porsche Taycan or a Tesla. It's not a wacky concept device with sci-fi ambitions, which I like. It's more... realistic.

According to Engineering Manager Ogawa-san, the team focused on the interior so it could showcase what Sony does best. They're not trying to beat carmakers at their own game, it's a stage for the relatively tech and software that's often invisible in your average car.

Take entertainment, an area where Sony knows what it's doing. Not only do you have expansive screens for displaying information, entertainment and controlling things, but the car's audio system (with a speaker attached to each of the four seats' headrests), is capable of broadcasting music in 360 Reality Audio. Sony's relatively new music standard creates a richer soundstage that goes beyond stereo. Inside a car, surrounded by press and trade show hall music, it sounded pretty good, especially considering this very much in the early stages of development. Given Sony can make the speakers and created 360 Reality Audio, it's something it could easily share with Ford, Toyota or whichever car company comes calling.

Likewise, Sony's been working on LiDAR sensors for a while. For this project, it's come up with a term for all these collective sensors working together: the Oval. For the exterior, that involves sensors that will detect the road, objects and people around the car and even velocities. Inside, though, Time of Flight (ToF) sensors are embedded to detect the passengers and driver, adjusting settings to suit whoever is there. While the likes of seat pitch and foot space are included, this will apparently encompass the 360 Reality audio settings too. Sony's image of how its tech all works together is pretty advanced.

The user interface, Ogawa notes, was a surprisingly crucial part of Project-S. It's all polished and connected: the dashcam can beam content to the dash, where you can add backing music or even visual effects, like a cute little highlight reel of a particularly pretty road-trip. You can swipe content, maps and more from the driver side of the dash to the passenger side. Again, this is the kind of stuff Sony can make in its sleep: gadget interfaces.

The car has Level 2 autonomous driving capabilities, which cover steering, acceleration and breaking, but also dictate that a driver needs to be behind the wheel at all times to take control when needed. Sony's Koeda told me that the team is looking further into the higher levels of autonomous driving, but that solving those challenges was a more distant goal. And that's enough. This is still just a concept car.

There are little features everywhere, and the finish tricked me into thinking this car was a road-bound model. But that's not what Vision-S is. We've barely seen the car move, the window switches didn't work when I was messing around inside -- then you remember that this isn't a proper car. It's proof that Sony is very serious about getting even more involved in mobility tech. It just had to make a car to do so.

In this article: AutonomousVehicles, bestofces2020, car, cars, ces2020, gadgetry, gadgets, gear, sedan, sony, tomorrow, transportation, video, vision s, visions
All products recommended by Engadget are selected by our editorial team, independent of our parent company. Some of our stories include affiliate links. If you buy something through one of these links, we may earn an affiliate commission.