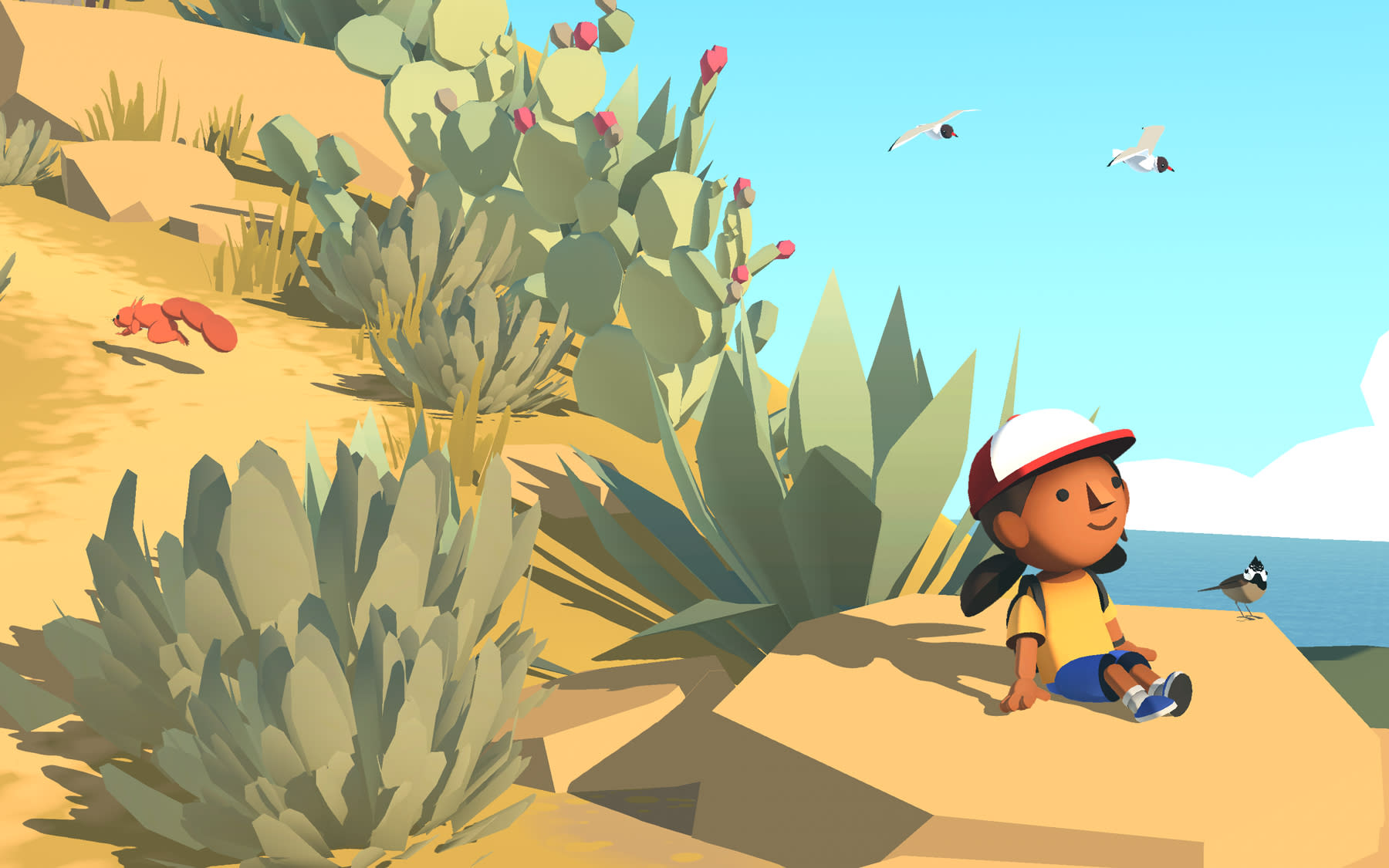 'Alba: A Wildlife Adventure' is a chill game about protecting nature

The studio behind 'Monument Valley' has done it again.

UsTwo Games continues to prove that it’s not a one-hit-wonder. The studio, best known for the award-winning Monument Valley, has pulled off an equally-creative sequel, a dreamy adventure in mobile VR, and a timed exclusive for Apple Arcade about fixing objects and fraying relationships. UsTwo’s latest project, Alba: A Wildlife Adventure, hits the same creative heights. It also shows that the company is comfortable making 3D games with a mostly traditional camera and control scheme. If you’re looking for something chill and non-violent to play over the festive period — a family-friendly break from Cyberpunk 2077, perhaps — it’s worth checking out via Apple Arcade, Steam or GOG.com.

The game follows the titular Alba as she vacations on a fictional island called Pinar del Mar. At the beginning of the adventure, she’s given a wildlife book and a smartphone that, through a special app, can identify animals captured with the rear-facing camera. Alba loves nature and, with some encouragement from her grandparents, decides to chronicle every living creature. The obvious parallel is Pokémon Snap, the beloved photography game from the Nintendo 64 era. Alba: A Wildlife Adventure isn’t an on-rails affair, though. You can walk anywhere you like and snap photos at a brisk or leisurely pace — it’s completely up to you, and there’s no reward or punishment for getting a dynamic or perfectly-framed shot.

There is a slight art to filling out your Fauna Mediterránea, though. Just like wild Pokémon, each creature lives in a specific part of the world. You’ll need to visit the Terraces to find a Guirra Sheep, for instance, and the Mountain for a Peregrine Falcon. The animals move around their assigned biome, too, which makes it a teensy bit harder to line up a shot. If you’re too far away, or the animal suddenly jumps out of the frame, the app won’t register your find. To capture them all, you’ll need to master the smartphone camera, which can be controlled with a keyboard, gamepad or touchscreen, depending on your gaming hardware.

With more than 60 different species on the island, there’s plenty to track down and capture. I wish there was a little more variety in the wildlife, though. The game has a ton of different birds, but only a single lizard and ocean-dwelling creature. It would have been nice to photograph some insects, too, using some kind of special macro lens.

Alba: A Wildlife Adventure is more than a collectathon, though. The game’s hero soon discovers that a hotel is going to be built on the island’s currently neglected nature reserve. Alba and her best friend Ines are understandably furious and create a petition to block the hotel’s construction. To persuade the island’s money-hungry mayor, though, they’ll need at least 50 signatures from the townsfolk. The pair slowly accrue them by repairing the nature reserve, helping animals and generally cleaning up the island. Every time they do a good deed, more citizens are reminded of the animals and natural beauty that lies around them.

All of these tasks are simple to complete. A single button tap will repair a broken walkway or bench, for example. The same command will free a bird from the plastic rings that keep an alcoholic six-pack together. While mundane, I found these missions to be immensely satisfying. That’s partly because — and I’m slightly ashamed to admit this — I love open-world busywork. I’ll happily load up an Assassin’s Creed title and complete some of its side quest minutiae while listening to a podcast or audiobook on my phone. Or talk to some villagers on Animal Crossing: Pocket Camp while preparing dinner after work. If you love these sorts of laid-back gaming experiences, you’ll probably appreciate Alba: A Wildlife Adventure too.

UsTwo Games has said the game is inspired by employees’ “fond memories of childhood summers in the Mediterranean.” It really shows. The tiny town has a single vet (Clínica Veterinaria), bar (Bar Sol) and carpentry store (Carpinteria Maria). There’s a ferry that will take you La Roqueta, an even smaller island with a cafe that sells paella and tortilla. On both landmasses, the ground is dusty or covered in sun-burnt grass. You’ll notice that some residents are fanning themselves, gobbling ice cream or dozing on deckchairs outside their homes. Others sit on benches, happy to read a newspaper or look at the nearly cloudless sky for a while. You’ll never see a moving car, and no-one seems in a rush to do anything.

The game has a short but dramatic finale. (You can probably guess whether the hotel gets built in the end.) It took me roughly four hours to complete, though I didn’t photograph every beast and one patch of rubbish eluded me. Alba: A Wildlife Adventure is the sort of game that you can knock out in a single evening. The ideal length, I suspect, for any child with a short attention span. If your little one loves nature — or you want to teach them about environmental conservation — this is a great choice. It could also appeal to older players who did similar vacations as a child, or simply wish to close their eyes and pretend they’re somewhere warmer for a while.