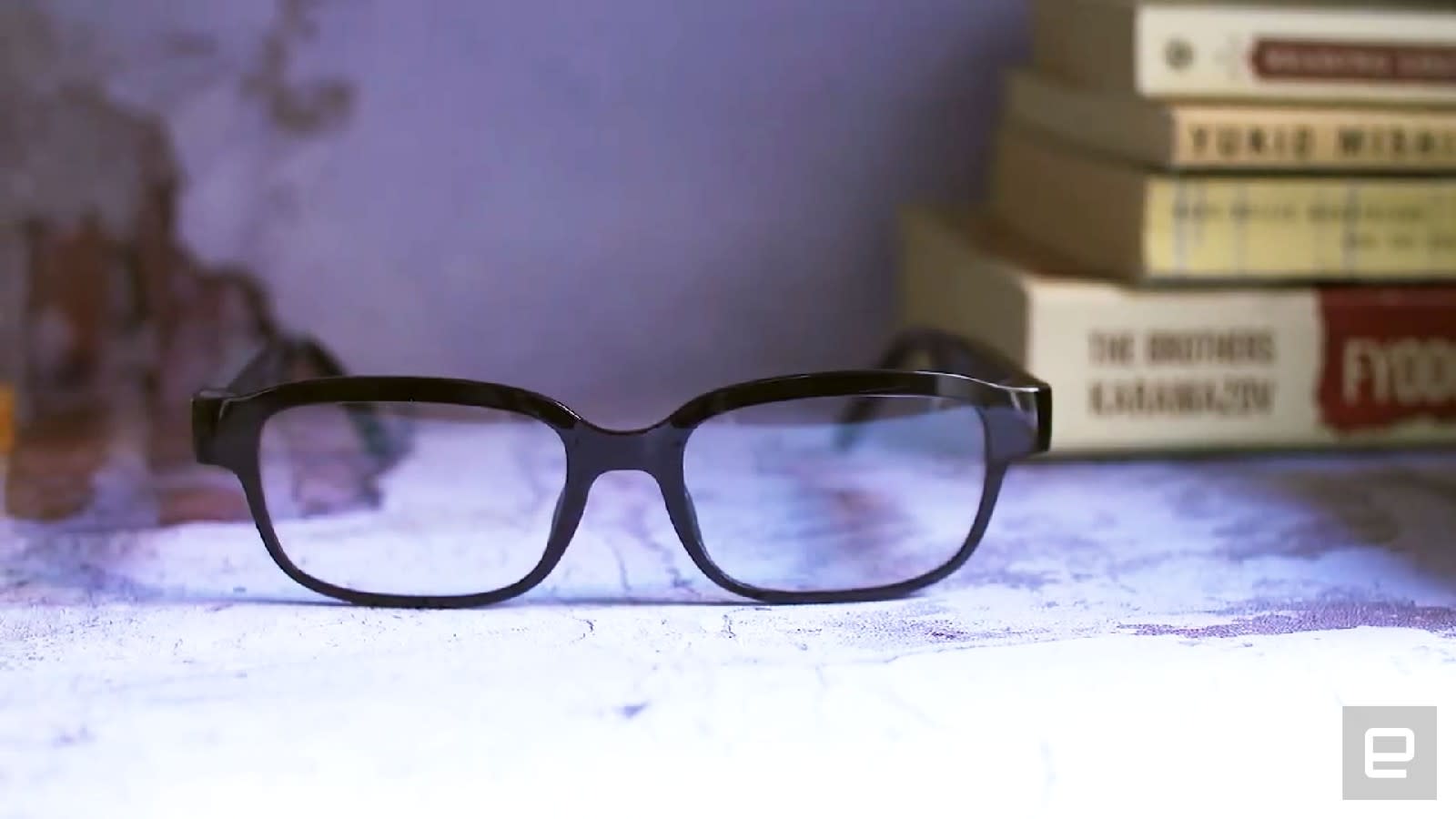 Echo Frames review: Alexa on your face is both helpful and annoying

It’s been more than a year since Amazon introduced the Echo Frames to the world, and this month the connected glasses finally became widely available for purchase. For $250, you get hands-free access to Alexa wherever you go. Additionally, you can take calls, play music and hear your notifications through the device’s open-ear speakers, while still being aware of your surroundings. To be clear, though, that’s pretty much all the Echo Frames do; there’s no display or camera. Still, there’s potential here, especially for people who already wear glasses and want to interact with their phone without touching it.

Compared to most smart glasses I’ve tested, the Echo Frames are surprisingly comfortable. I sometimes forgot at the end of the day that I still had them on. Only the medium/large size I received is currently available, but as someone with a fairly wide face I liked the fit. Amazon provides helpful measurements and a size guide on its site, which is redundant while there’s only one size available, but it’ll help you choose well.

Despite having thicker arms that house components like speakers and mics, the Frames didn’t feel clunky. In comparison, devices like the Bose Frames or Snap Spectacles are simply not as well-made or comfortable.

If you don’t like Amazon’s squarish design here or were hoping for more color options, you’re out of luck. My review unit is in plain black and there are just two other variants available: tortoise and and “horizon blue,” whose color-blocked design has a blue bottom half and black top. Those looking for rounder frames or something more Warby Parker-like will have to wait till the company releases more styles. (No word yet on if or when that might be coming.)

Unlike the Bose Frames, which are sunglasses, Amazon’s version comes with clear lenses and you can fit them with prescription ones too. This makes it far more useful, since you can wear them around the house or at night.

Under the Echo Frames’ right arm sit buttons for volume control, a charging port, as well as what Amazon calls an action key. You can press this to access Alexa, and double click to mute the mics. Holding this down turns the Frames on or off. There’s also a touch-sensitive panel on the right side where you can swipe to hear details of a notification or tap to dismiss it, which is completely counterintuitive. And, to make matters worse, it sometimes confused my swipe for a tap and dismissed a message I wanted to hear.

There’s a tiny LED in the frame above the right lens that’s only visible to the person wearing the glasses. When you say “Alexa” or press the action button, this lights up to signal that Alexa is listening, though it’s a little hard to see.

I have an Echo speaker at home, and one of my biggest concerns was that saying “Alexa” would trigger both devices. Barring some early hiccups immediately after setup, Alexa usually responded on the Frames when I was wearing them. I did enable Auto Off, though, which turns off the glasses three seconds after I remove and place them upside down on a surface.

Alexa is as responsive here as it is on Echo speakers — that is, very responsive. Amazon’s devices are consistently faster at waking up and doing what I ask than my Google speakers. Perhaps the best part, though, was that I no longer had to yell at my speaker from my kitchen and could speak at a normal volume to turn on the lights. And if you have ambient noise in the background, like music or running water, the Frames can still hear you since it’s right on your face.

I also really like the fact that the Echo Frames allow you to listen to whatever you want on your phone without bothering others around you or putting on headphones. The open-ear design does make it possible to hear what’s in your surroundings while Instagram Stories, for example, play through the speakers. Like the Bose Frames, Amazon’s wearable uses a projection technique that beams sound into your ears so that, theoretically, nobody nearby can hear what you’re listening to.

In reality, though, this is only really effective at lower volumes and with primarily vocal content, like a phone call or podcast.  Even at just 30 percent volume, my coworker Brian Oh could still hear G-Idle’s Oh My God from six feet away.

Also, I just wouldn’t listen to music on Echo Frames. Anything I played, including Taylor Swift’s Willow, sounded hollow and had zero bass. Plus, even at max volume, I struggled to hear my music on the Frames over the songs an Uber driver played on their car’s speaker. Amazon offers a feature called Auto Volume that adjusts the Frames’ volume so you can hear your music over your surroundings. The problem is, this never seemed to work; every now and then I’d see the volume slider appear on my phone’s screen, indicating that the Frames were adjusting the levels. But the effect was never obvious and in noisy environments I struggled to hear sound from the speaker.

Aside from acting as headphones for your music and calls, the Frames also help you stay on top of your alerts by reading them to you throughout the day. But this was also problematic.  During my first few days with it, every single notification that popped up on my phone would result in a ping and description. That became even more irritating when, because of an active WhatsApp group chat, I was bombarded by nonstop alerts that quickly got annoying and distracting. Alexa also drove me nuts by announcing I had a message from “Device Personalization services” every time a new song started on Spotify.

This is partly due to the way Android handles notifications and early Bluetooth-based wearables suffered from similar issues. But even after I tapped to dismiss the first two such alerts, which Alexa says will keep you from hearing it again, I kept getting pinged every time a song changed.

You can turn on the VIP Filter setting in the Alexa app to remedy that by choosing what apps to hear from on the Frames. But the selection of apps is pretty limited at the beginning; only apps that had already sent a notification through would show up, meaning you could only choose to disable something after it pings you once. I only allowed my frequent apps like WhatsApp, Telegram, Discord and Instagram through the Filter, but an annoying alert from Peacock still got through after I enabled VIP Filter. You have to choose the “Pause new requests” option here to stop this, which is an extra step to take.

VIP Filter is also a bit of a misnomer. Since Amazon doesn’t currently recognize Telegram and Discord, among others, as messaging apps, you won’t be able to prioritize specific contacts’ chats. So far, only WhatsApp is identified, and I can whitelist people and groups within it.

Amazon clearly still has a lot of work to do to improve how the Frames handle notifications, but the company acknowledges this is a new product and says it’s “always interested in hearing customer feedback.”

The company says the Frames will last for two hours of mixed use on 80 percent volume, and up to four hours of continuous playback. I generally left the volume at 50 percent or lower, and I got a day or more on a charge. I used the Frames to chat with my friend for an hour before playing music for about 20 minutes at about 80 percent volume and the battery dropped from 100 percent to 60 percent.

Amazon is far from the first company to make smart glasses. It’s not even the first to try its hand at Bluetooth frames with embedded speakers. Bose even had the same name for its: Frames. There are a few key differences, for one, since Bose’s $200 Frames are a pair of sunglasses, you’re not gonna wear them at night.

Bose’s device also doesn’t have a touch panel, and its single button controls are fairly simplistic. I also found them clunky, tight and quite uncomfortable after about an hour of wear. The company has since released newer “Sport” models for $50 more, but I haven’t tried them and can’t tell you if they’re more comfortable.

Bose does offer better audio projection than Amazon, though, and I only noticed sound leakage from the Bose Frames at higher than 80 percent volume.

Despite some complaints, I’m surprised by how much I like the Echo Frames. I found myself putting them on several times a day even though I don’t need glasses. They’re great for when I want to hop on a call while still being able to listen out for a delivery person, or when I need Alexa to hear me over the music my Google speakers are blaring. If you actually need glasses, they might be even more useful. Amazon still needs to iron out some kinks, particularly with notification handling, but as long as you don’t need high-quality audio and can live with annoying alerts, the Echo Frames are surprisingly compelling.