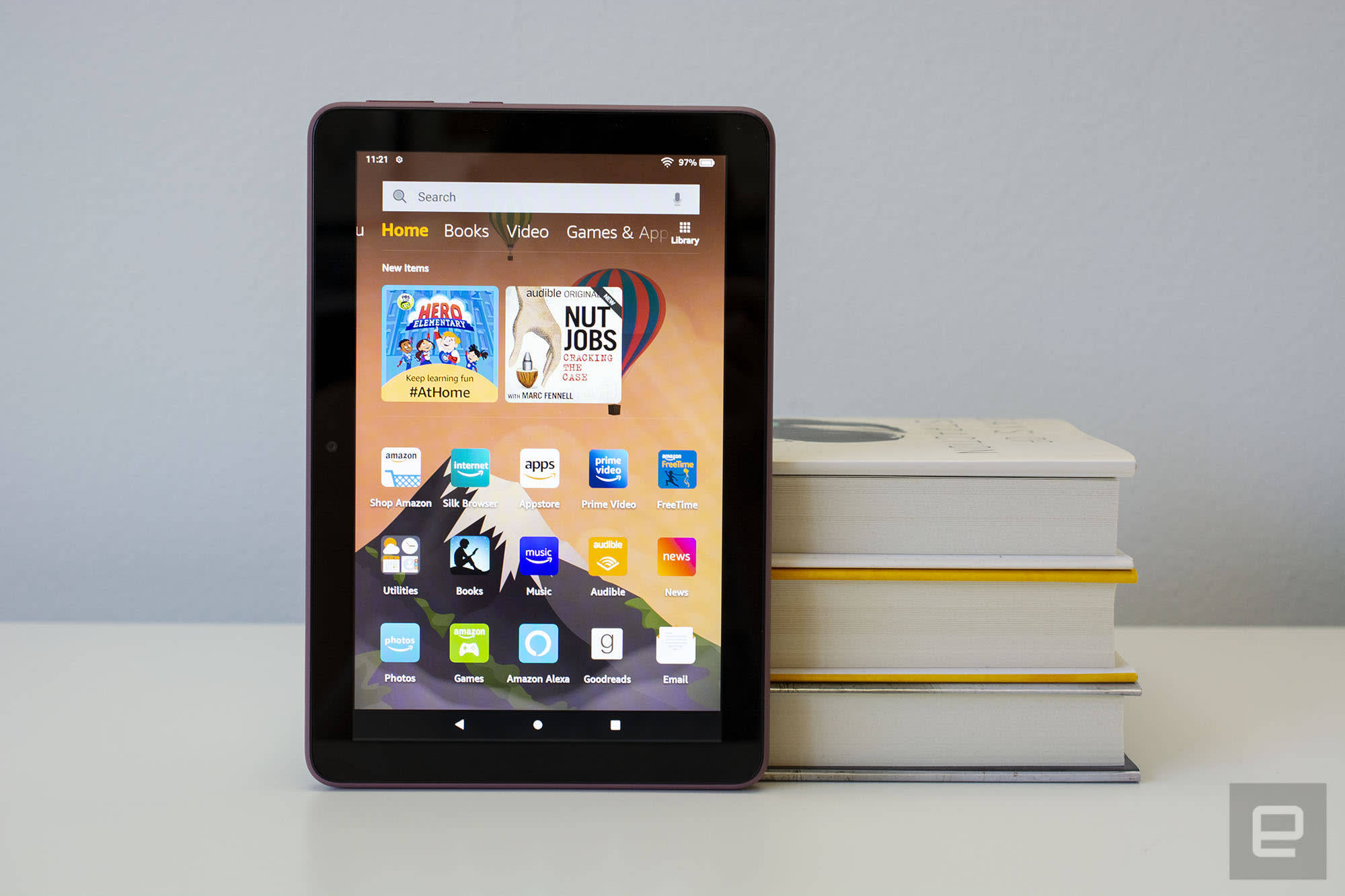 There’s a lot to like -- even more if you’re an Amazon super-fan.

Despite the hype around the latest iPad Pros, there’s something to be said for cheap slabs. They’re great communal devices and living-room mainstays for the entire family to use to watch videos, play mobile games, send emails and browse the Internet. But affordable tablet options have dwindled over the years and while devices like Samsung’s Tab S6 Lite are solid, you still have to pay over $300 to get it.

Many simply don’t have that much wiggle room in their budgets, and that’s where Amazon’s Fire tablets come in for the save. The new $90 Fire HD 8 and $110 HD 8 Plus continue the pattern we’ve seen Amazon push in recent years: improve the tablet’s hardware just enough to warrant a slight price increase, while keeping the cost well below its competitors. Amazon largely succeeded this time around, making better versions of the previous Fire HD 8. However, the company focused its efforts on hardware while leaving software mostly untouched -- and the latter continues to hold Fire tablets back.

Let’s start with the hardware improvements. Both the Fire HD 8 and HD 8 Plus are nearly identical from this perspective. These new slates have rounded corners and slightly smaller bezels around their 8-inch, 1280 x 800 pixel displays. The bezels are just wide enough for my thumbs to sit comfortably so they don’t accidentally trigger the touchscreen. The back is a smooth-finish plastic and comes in different colors including black, white, plum and twilight blue. Does it feel cheap? Yes, but lets remember -- this is a $90 tablet. Despite this, the build quality is actually decent. The Fire HD 8 doesn’t bend under pressure and it feels like it could withstand a drop from your desk or countertop without much injury.

Both tablets have quad-core processors, dual speakers, headphone jacks, 2MP front-facing and rear cameras. You’ll also have your choice of 32GB or 64GB storage options, and they can be expanded to up to 1TB using the microSD card slot. Both also have USB-C charging ports, which is arguably the most important hardware change from the previous Fire HD 8. It’s a change we expect to see in any 2020 devices that don’t already have USB-C and it allows for easier, faster charging. The Fire 7, which was updated last year, still has a microUSB charging port, making the new Fire HD 8s the most affordable Amazon slate with USB-C. I’d recommend the Fire HD 8s for that reason alone if you were debating between the two, not to mention the HD 8 also provides a big bump in display resolution, speaker setup and battery life.

The differences between the Fire HD 8 and the HD 8 Plus are minor: the latter has 3GB of RAM instead of 2GB and it supports wireless charging. It also comes with a faster, 9W AC adapter so wired charging will take less time. Both tablets actually have the same 4850mAh battery inside, so if you already have a similarly powerful adapter, you could get the regular Fire HD 8 to charge up from zero just as quickly.

The extra gigabyte of memory should make playing games and multitasking a bit smoother on the HD 8 Plus, but it didn’t make a world of difference in my testing. The two tablets performed much the same -- relatively smoothly, with some lag and choppiness when switching between apps and swiping between home screens. So unless you’ve worked really hard (and spent a lot of money) outfitting your home with Qi wireless charging pads, there’s no compelling reason to spend the extra $20 on the HD 8 Plus.

Since these are mostly the same tablet, I found myself using them both interchangeably. I spent most of my time reading comics via Hoopla or my own books in the Kindle app, watching movies on Prime Video and Disney+, shopping Amazon (or other retailers using the Silk browser app) and occasionally playing through a few levels of Candy Crush. The latter was made better by Game Mode, which mutes and hides notifications so you’re not interrupted while you’re playing.

The tablet basically lived on my couch and I picked it up any time I wanted a larger screen to work with than  my iPhone XR. Sometimes I didn’t even have to pick it up thanks to hands-free Alexa, which lets you bark questions at the tablet when it's sitting idly next to you. I also barely had to charge the thing: Amazon estimates up to 12 hours of use on both the Fire HD 8 and the HD 8 Plus. I used it for hours one night and woke up to it with almost the same amount of battery life as I left it. Also, both tablets lasted roughly 21 hours when faced with the battery test we usually run on Android devices.

TheFire HD 8 ran smoothly when I was using an app or playing a game, but navigating the Fire OS interface and doing things like turning on and off Show Mode produced a few seconds of lag time. The latter is Amazon’s way of turning a Fire tablet into an Echo Show -- the standard app-grid interface disappears and you’re met with the same screen that you’d find on one of the company’s smart displays. If you buy a tablet stand or find another way to prop up the Fire HD 8, Show Mode makes it a good substitute for a standalone Echo device.

However, the more I reached for the Fire HD 8, the more inconveniences I found -- not with the physical tablet, but with its software. The Fire HD 8 technically runs Android, but Fire OS is really something totally different -- set your expectations accordingly. The Google Play Store isn’t natively available on Fire OS. Instead, you have Amazon’s “AppStore,” which has programs made specifically for Fire tablets and a smattering of Android apps -- but Google apps are left out.

This has been a problem for the entirety of Fire OS’ existence. Instead of using Google Chrome, you have to use Amazon’s Silk browser; instead of Gmail, you’re left with a faintly-branded Amazon Email app, and the list goes on. This won’t be a huge issue if your life isn’t managed by Google services, but being forced to use Amazon’s imitation apps is not a great experience. To make things worse, many Android apps aren’t available at all in Amazon’s AppStore. So opting for an email app like Spark isn’t possible. And yes, while you can sideload the Play Store onto Fire tablets, that’s not something most users will want to deal with.

And we’ll probably never see the typical Android experience on Fire tablets. (I know, “never say never,” but I’m willing to go out on a limb here.) Fire OS is designed to keep Amazon products and services top of mind for the user -- that means these tablets become a lot more useful if you’re entrenched in Amazon’s ecosystem. The homepages on the Fire HD 8 (Books, Video, Shop, Music, etc) are designed to make sure you’re using as many Amazon services as possible -- even the ones you’re not currently paying for. Amazon Prime members will find they can do the most on Fire tablets simply because their Prime membership includes things like free ebooks with Prime Reading and access to the entire Prime Video library. If you don’t shop on Amazon often or use many of the company’s subscriptions and services, you may quickly feel suffocated by how much Amazon pushes its services in the interface of the Fire HD 8.

If you can keep your expectations in check, you won’t be as disappointed when you go to watch a YouTube video to find that you have to download a strange, third-party YouTube app or use the Silk browser. You’ll be less frustrated by the fact that the first things you see on your Fire tablet will always be a promo for a Prime Video original show or slideshow of books you might like that are available through Kindle Unlimited.

In fact, you might be pleasantly surprised by how capable Fire tablets are. I’d venture to say that most people can do most of the things they’d want to do on a regular basis with an Amazon tablet. In the case of the Fire HD 8, the experience is made better by its refined design, HD display and USB-C charging. It could very easily become your e-reader, tiny TV and smart speaker all in one. That’s a great deal for $90, and one that makes playing by Amazon’s rules a bit easier to swallow.