Despite having Android under the hood, Amazon's Fire tablets have traditionally had a very different purpose than the usual Android slate. Instead of trying to be an all-in-one workhorse, like some of Samsung's Galaxy offerings, Amazon's Fire tablets are aimed at media consumption. And, thanks to Amazon's clout, they tend to be dirt cheap, making them ideal for penny pinchers who want a simple tablet for watching videos and playing games.

The cheapest of the bunch is the Amazon Fire 7, but it hasn't been updated since 2017. That is, until recently. Amazon has finally seen fit to bring it up to 2019 standards... but just barely. Yes, it is ever so slightly faster, has twice the storage capacity and now has hands-free Alexa -- meaning you no longer have to unlock the tablet in order to use it. But those are pretty minor upgrades. Aside from that, the Fire 7 remains basic. Sure, the Fire 7 is incredibly cheap at just $50, but at the same time, you do get what you pay for.

The Fire 7 comes in an all-plastic construction that definitely gives it the look and feel of an entry-level bargain-bin device. It does seem pretty sturdy and durable, and I like that the back has a bit of a grip so I'm in less danger of dropping it. The new Fire 7 also comes in pretty colors like plum, twilight blue and sage, and you can even get a matching case... but that costs an extra $25, which is half the price of the tablet itself. I do like the case, since it doubles as a stand, but that's quite a bit of sticker shock, especially if you're already a budget-conscious shopper.

The tablet's 7-inch IPS display with its 1,024 by 600-pixel resolution doesn't help things much either. I understand that I have to be a little forgiving when it comes to low-end tablets like this, but I've been far too spoiled by higher-end displays on almost anything these days to get over how bad it looks. Images were fuzzy around the edges, and text was just not as sharp as I'm used to. Plus, considering that one of the main uses of a tablet like this is for watching videos, I would've preferred at least an HD display.

Not everything was bad though. As mentioned, Amazon increased the built-in storage to either 16GB or 32GB, and there's the option to add even more with up to a 512GB microSD card. The front and rear 2-megapixel cameras also now offer 720p video recording, which is no doubt a step up from the 480p on the previous Fire 7. Still, I barely use the cameras on tablets anyway, so this didn't affect me one way or the other, but it's good to have if you plan on using it for video calls. 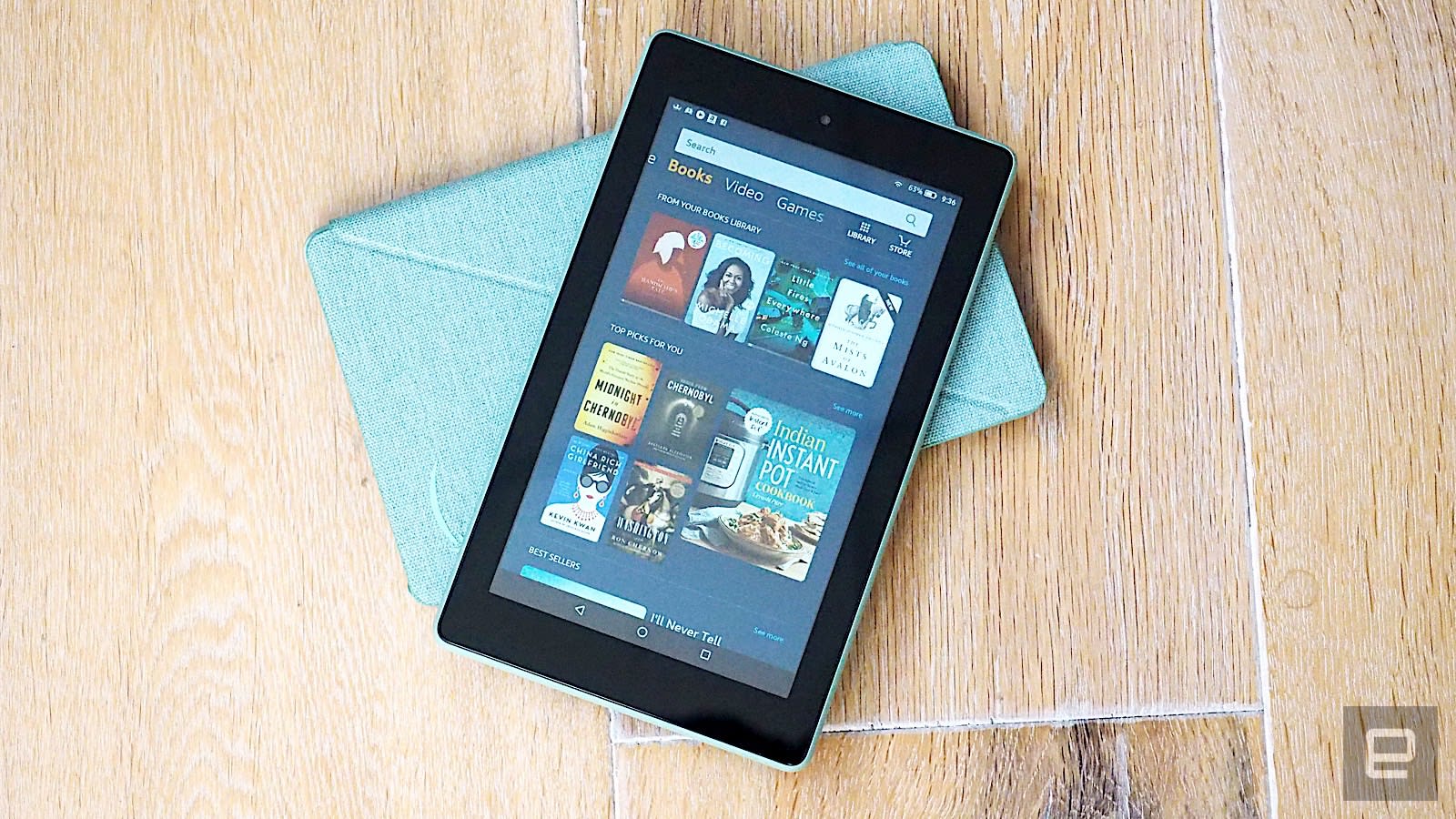 Just like other Fire tablets, the Fire 7 runs Fire OS, which puts the Amazon experience front and center. From the moment you power it up, you'll be presented with separate pages for categories like Books, Video, Games and even one called Shop, which (unsurprisingly) offers direct links to the Amazon store. All of the apps live in the Home menu, which of course includes shortcuts to all of Amazon's apps and services such as Audible and Prime Video. It's basically an all-in-one Amazon portal in the palm of your hands.

As with the Kindle, the Fire 7 comes in two flavors: one with Special Offers, which shows ads when the screen is locked, and one without. The ad-free version, however, will cost you $15 more, bumping up the initial price to $65.

It's worth remembering that unlike normal Android tablets, Fire OS devices don't have access to the usual Google apps like Gmail or YouTube. Instead, you have to download third-party alternatives from Amazon's own app store -- there's no Google Play store option here (though you can sideload apps via USB).

If you want a dedicated YouTube app, for example, you might download something like "Videos For YouTube" made by Kyy Apps. If you want Gmail, you can download "Tab for Gmail" by Tube Apps. Alternatively, you could go to the respective web pages on the Silk browser. These options certainly do the job, but the experience isn't the same. With an Android tablet, you only need a single Google account to login to all of your Google-related apps. With Fire OS, however, you'll need to repeat the process with every new app. 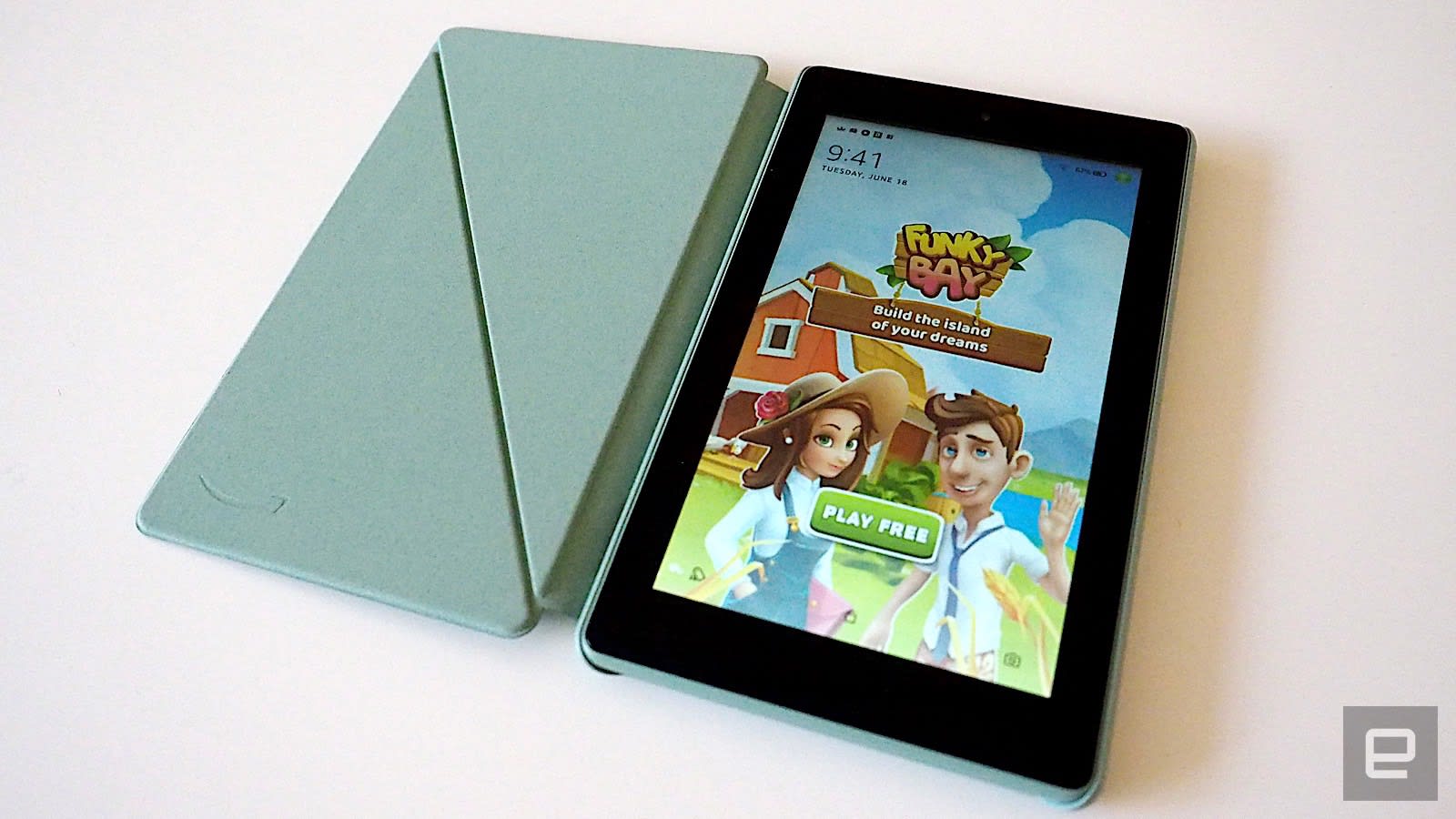 One feature I did like, however, was hands-free Alexa. With the previous Fire 7, the only way to summon Amazon's assistant was to unlock the tablet. Now you can beckon her simply by saying "Alexa." Alexa on the Fire 7 works pretty much the same way it does on other devices. When I say "Alexa, show me the weather" for example, it'll show me not just the day's highs and lows, but also the forecast for the upcoming week. Alexa also came in handy for finding videos, playing songs, setting timers and alarms, and just telling me the day's headlines.

Amazon says that the new Fire 7 is faster than the 2017 version due to a newer, faster core in its 1.3GHz quad-core processor. Despite that, I still found the performance to be sluggish. Launching apps often takes several seconds and there are frequently screen jitters when swiping through the menu. Playing games was especially frustrating, with long loading times and a lot of lag. Of course, watching videos wasn't a great experience either due to that lackluster screen. The Fire 7 only has one speaker, so the sound quality isn't great either. 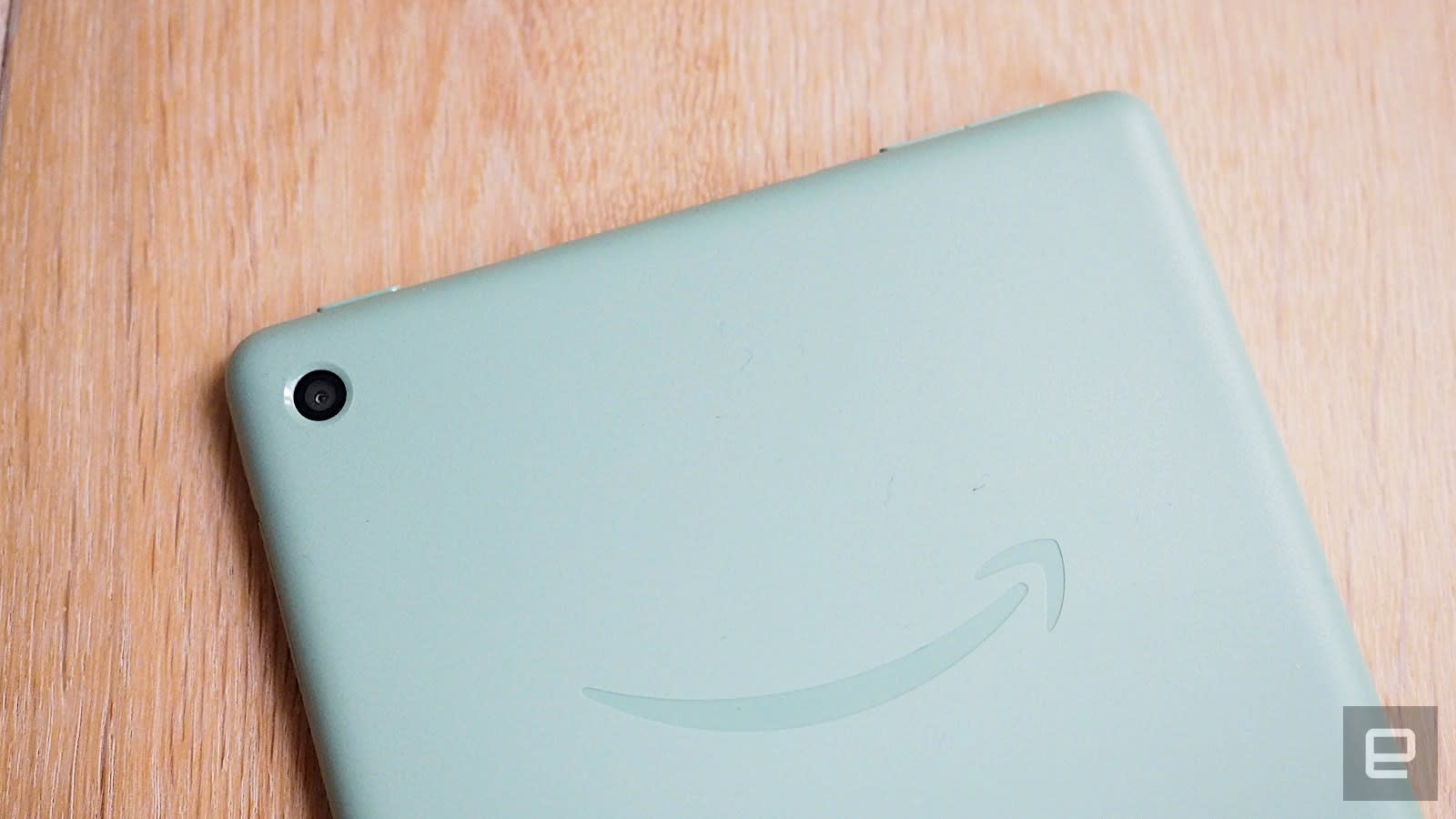 Another area where the Fire 7 disappoints is battery life: It barely lasts a full day. According to Amazon, it should last around seven hours, but from my experience watching videos and playing games, it seemed closer to five.

I understand that at $50, the Fire 7 isn't going to be top-of-the-line hardware. This is clearly meant for those who are budget-conscious. But the thing is, you can actually get much better hardware if you decide to spend more. For around $30 more, for example, you can get the Fire HD 8, which has a slightly larger screen, an HD display, Dolby Atmos speakers and a few more hours of battery life. When I was writing this review, Amazon was selling the Fire HD 8 for just $60, which makes it an even better deal.

With its ho-hum display, lackluster performance and short battery life, I just can't recommend the Fire 7. I would suggest waiting for the next price drop on the Fire HD 8 or just spending a little more for it. Yes, it's more expensive, but I would rather spend $80 on a decent tablet than $50 on a lousy one.